Submitted Successfully!
Thank you for your contribution! You can also upload a video entry related to this topic through the link below:
https://encyclopedia.pub/user/video_add?id=10251
Check Note
2000/2000
Glycosylation in Plant Development
Edit
Upload a video
This entry is adapted from 10.3390/biom11050756

The development of plants and the interplay with its environment are highly linked to glycosylation of proteins and lipids as well as metabolism and signaling of sugars.

Plant development is an overarching term for a plethora of processes, including embryonal development, seed maturation and germination, and growth of the vegetative plant with specialized roots, shoots, leaves and flowers [1][2][3]. It has been shown that sugars, glycoproteins and glycolipids play a crucial role in various pathways such as hormone signaling, cellular trafficking, development and growth [4][5][6][7][8].

Glycoproteins, glycolipids and sugars are heavily involved in mediating environmental cues [4][6][9][10][11]. During the course of a plant’s life cycle, cells undergo a multitude of changes: plant cells develop, grow and gain cellular volume [12]. As soon as germination is initiated, the cells of the growing hypocotyl, radicle and cotyledons multiply fast. This rapid growth requires intense enzymatic as well as hormonal control mechanisms [13].

In general, the addition of a carbohydrate moiety to a protein or lipid is referred to as glycosylation. The process of protein glycosylation is considered the most complicated but ubiquitous modification of secretory proteins [14]. The main types of glycosylation are N-, O-, P-, S- and C-glycosylation, referring to the atom which is involved in the glycosidic linkage [15]. However, N- and O-glycosylation are the most abundant in plants. It is estimated that approximately 50% of all proteins are glycoproteins, of which the majority is N-glycosylated [16][17]. The presence or absence of N- and O-glycans on glycoproteins has been shown to influence a proteins’ activity, stability and functionality to a large extent, and plays a critical role in cellular signaling, molecular trafficking, plant development and adaptation to biotic and abiotic stresses [7][18][19] (Figure 1). 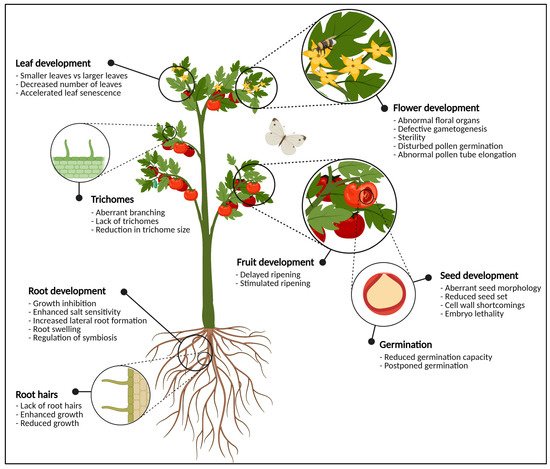 Figure 1. Graphical representation of the most important plant organs. The plant in this figure is generic and does not necessarily represent tomato. For each organ, the most significant phenotypical traits when glycosylation enzymes are knocked-out, knocked-down or over-expressed are highlighted. In the flowering parts, defects in glycosylation cause abnormal development of anthers and pistils, pollen tube germination and elongation, and defective gametogenesis which often leads to sterility. At the level of the fruit, glycosylation enzymes are important for fruit ripening and softening. Seeds show aberrant seed morphology, seed set, (embryo) lethality and cell wall defects when the expression of one or more glycosylation enzymes is disturbed. Vegetative tissues such as the leaves and the roots also experience morphological changes due to aberrant protein glycosylation. This figure was created with BioRender.com.

2. Developmental Consequences of Glycosylation: From Flowers to Germinating Seeds

2.1. Flowers Have a Sweet Tooth

A flowers’ ultimate goal is to produce viable seeds, which will generate progeny and propagate further on. However, flower development is not as straightforward as it seems, since a multitude of requirements have to be met. One of those requirements is proper protein glycosylation, as it is responsible for a plethora of developmental processes and even facilitates pivotal events during the plant’s life cycle [20] (Figure 2).

Fruit ripening encompasses the set of processes that facilitate fruit set, development and maturation of fruits (Figure 3). These are well-understood on a biochemical, physical and molecular level, and have been studied thoroughly. Starting from anthesis and fertilization of the ovaries, the seed as well as the surrounding fruit develops through cell division, cell enlargement and maturation [21][22]. Finally, fruits bearing mature seeds will abscise from the parental plant and start their own life cycle. 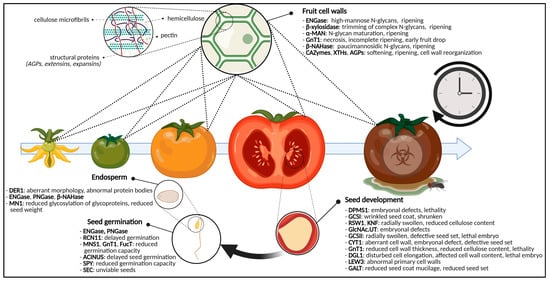 2.3. The Sugar-Craving Cell Wall of Seeds

Plant cell walls are complex and dynamic organs which fulfil many essential functions. Cell walls are built up of O-glycosidic biomolecules, grouped in cellulose, pectic polysaccharides, hemicellulose polysaccharides and lignin. Pectin and lignin are unique to the primary cell wall and secondary cell wall, respectively, and the specific composition of the cell wall varies between different plant species [23].

Two classical examples of enzymes that are of great importance for both plant N-glycosylation and seed and embryonal development are the trivalent dolichol phosphate mannose synthase (DPMS) complex [24] and α-glucosidase I (GCSI) [25]. Although DPMS and GCSI are involved in very different steps of the glycosylation pathway, plants display comparable phenotypes whenever the coding gene is interrupted or over-expressed. Whereas the DPMS complex plays a pivotal role in the synthesis of the lipid-linked glycan precursor [26], α-glucosidase activity is required during glycan trimming after en bloc transfer of the N-glycan precursor [27] (Figure 4).

Both over-expressed DPMS1 and knocked out gcsI mutants display a lethal phenotype with detrimental defects on embryonal development. One of the phenotypic particularities shared between over-expressed DPMS1 plants and mutant gcs1 plants is the aberrant seed morphology: either wrinkled or shrunken, or both. In both cases, the aberrant phenotypes can be attributed to disturbances in seed coat cell wall formation and cellulose biosynthesis [24][27][25]. Shrunken seeds with defects in the embryonal stage were also observed when two GlcNA.UT genes were knocked down in Arabidopsis. However, the observed phenotype was not linked to cell wall defects [28]. Other α-glucosidase-encoding genes are Radially Swollen (RSW) 1 and KNOPF (KNF) and both are involved in cellulose biosynthesis and morphogenesis during embryonal development. Embryos of rsw3 and knf14 mutants showed serious defects in embryogenesis, looked radially swollen and were highly reduced in cellulose content [25]. The observed phenotype was attributed to the UPR. These findings suggest that N-glycosylation is of importance for cell wall formation through cellulose biosynthesis. Additionally, gcsII mutants, also involved in glycan trimming downstream of GCSI, have been reported and linked to cellulose biosynthesis. These mutants also displayed radial swelling of the roots, lethal embryos and defects in seed setting [29][30]. Very comparable phenotypes have been observed in mutants of the GTP:α-D-mannose-1-phosphate guanylyltransferase (CYT1) enzyme in Arabidopsis which is, just like DPMS1, involved in N-glycan precursor synthesis by producing GDP-Man and GDP-Fuc (Figure 4). Distorted cell walls, disturbed embryonal development and lethality have been reported for cyt1 mutants [31]. Both GCSI and GCSII activity, and N-glycan precursor synthesis are important for cell wall construction through cellulose biosynthesis [25][32]. 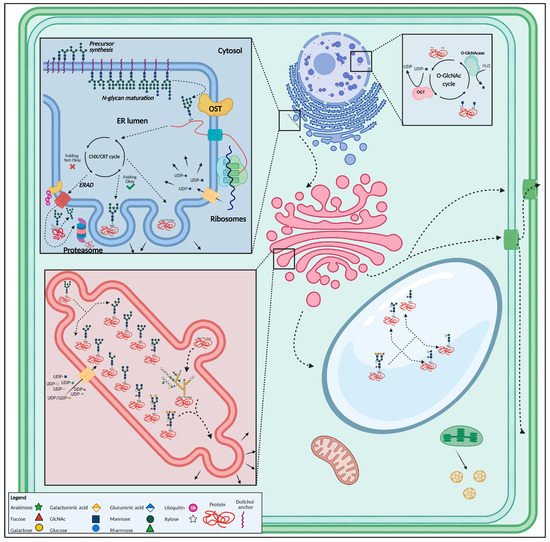 Figure 4. Overview of the most important glycosylated structures in the plant cell. N-glycan synthesis initiates in the endoplasmic reticulum, after which the glycan is added onto a polypeptide. Well-folded proteins are then guided towards the Golgi apparatus through vesicular transport, where the glycan structure is modified. After glycan maturation in the Golgi, glycoproteins are transported towards the vacuole, plasma membrane, cell wall or secreted. O-glycosylation occurs mainly in the Golgi apparatus. The O-GlcNAc modification takes place in the nucleus and cytoplasm. This figure was created with BioRender.com.

In germinating rice seeds, the number of N-linked glycosites equaled 242, distributed over 191 glycoproteins, highlighting the abundance and importance of (N-linked) glycosylation for the germinating seed [17].

3. Glycoproteins during Root and Leaf Development

3.1. The Deal with Glycosylation in Roots

N-glycosylation of different proteins is important for root development. The OST complex, necessary for transfer of the oligosaccharide from the lipid-linked oligosaccharide to a nascent polypeptide chain, consists of multiple subunits and mutations of some of these subunits disturb root growth (Figure 1, Figure 4 and Figure 5) [33]. The under-glycosylation due to mutations of genes involved in the OST-complex, often results in increased osmotic and salt sensitivity [34][35][36][37]. Numerous examples of plants mutated in genes encoding enzymes involved in N-glycan maturation displayed defective root growth and root architecture due to aberrant protein glycosylation [38][39][40][41] (Figure 5). 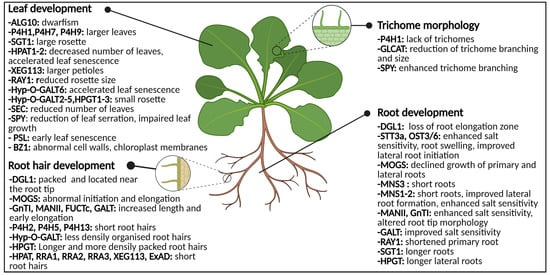 Similar to N-glycosylation, O-glycosylation also affects root growth (Figure 5). O-glycans determine the role and molecular properties of the hydroxyproline-rich glycoprotein and of small hormone peptides [7]. Prior to the addition of a sugar moiety, modifying the proline to a Hyp residue is essential. The generation of Hyp residues is regulated by prolyl 4-hydroxylase (P4H) [42]. Mutational analysis of several P4Hs in Arabidopsis resulted in transgenic plants possessing short root hairs [43][44][45]. Several adverse effects were observed when O-glycosylation is altered such as defective root (hair) growth or even increased root growth [46][47].

Trichomes are protuberances on the aerial part of the plant that differentiated from epidermal cells. Aberrant protein glycosylation can affect the architecture and development of trichomes. The majority of the trichome phenotypes were found in plants with impaired O-glycosylation. For instance, mutation of three β-glucuronosyltransferases (GLCATs) caused reduced trichome branching and size[54].