Submitted Successfully!
Thank you for your contribution! You can also upload a video entry related to this topic through the link below:
https://encyclopedia.pub/user/video_add?id=10074
Check Note
2000/2000
Coenzyme Q10
Edit
Upload a video
This entry is adapted from 10.3390/antiox10050759

Coenzyme Q10 (CoQ10) has a number of important roles in the cell that are required for optimal functioning of the immune system. These include its essential role as an electron carrier in the mitochondrial respiratory chain, enabling the process of oxidative phosphorylation to occur with the concomitant production of ATP, together with its role as a potential lipid-soluble antioxidant, protecting the cell against free radical-induced oxidation. Furthermore, CoQ10 has also been reported to have an anti-inflammatory role via its ability to repress inflammatory gene expression. Recently, CoQ10 has also been reported to play an important function within the lysosome, an organelle central to the immune response.

When the benefits of coenzyme Q10 (CoQ10) supplementation are being promoted, activation of the immune system is invariably quoted; however, such statements are rarely supported by documentary evidence referenced from the peer-reviewed medical literature. The objective of this article is therefore to review the current evidence in the literature for the role of CoQ10 in human immune function, including the benefits of CoQ10 supplementation in this new area of therapeutic utilization for CoQ10.
In order to determine the potential role of CoQ10 in immune function in a rational manner, one must first consider how the human immune system operates. In simplistic terms, the immune system is comprised of two parts, the innate immune system, and the adaptive immune system. As the name implies, the innate immune system is present and operational from birth, providing a rapid and non-specific first-line response to invading microorganisms. The innate immune system comprises a number of components, the most prominent being phagocytic cells (macrophages, neutrophils, natural killer cells) which destroy engulfed invading microorganisms via the generation of free radical species (reactive oxygen species (ROS) and reactive nitrogen species (RNS)). Subsequent to the innate response, the adaptive immune system may be activated, depending on the severity of infection. Adaptive immunity is a slower responding but more specific form of immune defence, involving B and T lymphocytes. B lymphocytes produce antibodies to neutralise specific antigens, whereas T lymphocytes have a role in destroying infected host cells. Communication between the various cell types of the two branches of the immune system is facilitated via cytokine protein chemical messenger molecules.
There is a common misconception that inflammation, which involves the release of pro-inflammatory cytokines, is a wholly negative process within the body. However, inflammation is the body’s normal response to infection or injury, and is essential for tissue healing, although this process should resolve following the initial immune response [1]. This resolution occurs via negative feedback mechanisms involving the generation of specific lipid molecules such as resolvins, protectins, and maresins which are synthesized from essential omega-3 and omega-6, fatty acids, respectively [2]. A balance must therefore be achieved in immune defence by neutralising infectious organisms, without precipitating their so-called cytokine storm, the uncontrolled release and excessive release by the innate immune system of pro-inflammatory cytokines resulting in tissue injury.
CoQ10 performs a number of cellular functions of potential relevance to the immune system. Firstly, CoQ10 has a key role in cellular energy supply, via its essential role in oxidative phosphorylation within mitochondria. The immune response has intensive energy requirements, and an adequate supply of CoQ10 is therefore required to enable the various cell types of the immune system to function optimally. CoQ10 serves as an electron carrier within the mitochondrial respiratory chain (MRC), where it transports electrons derived from complex I and II to complex III, enabling a continuous supply of electrons that are required for the process of oxidative phosphorylation with the concomitant product of ATP [3] (Figure 1). Secondly, CoQ10 also functions as an important lipid-soluble antioxidant, protecting cellular membranes and circulatory lipoproteins from free radical-induced oxidative damage [4]. The antioxidant function of CoQ10 is attributed to its fully reduced ubiquinol form [3]. Since phagocytic cells destroy invading pathogens via the production of free radicals [5], the antioxidant action of CoQ10 may protect phagocytic cells from self-destruction caused by their generation of free radicals. Finally, CoQ10 is able to directly modulate the action of genes involved in inflammation and may have a role in controlling the release of pro-inflammatory cytokines in disorders where this may be required [6]. The objective of the present article is therefore to review evidence from the Medline literature database for the role of CoQ10 in any of the above functions relevant to the human immune response.

CoQ10 is required for the optimal function of the immune system, as well as mediating inflammatory response in disease. The functions of CoQ10 supplementation in the treatment of immunopathy and in the immune function of other diseases are outlined in Figure 2. Indeed, the prospect of immune dysfunction has been associated with human CoQ10 deficiency [7]. In view of the ability of CoQ10 supplementation to enhance the activity of the immune cells, especially the B and T lymphocytes [8], as well as ameliorate the inflammatory response [9], it may be appropriate for use in a number of diseases of the immune system. One such disease is the neurodegenerative disorder multiple sclerosis (MS), an immune-mediated disease of the central nervous system. A study by Sanoobar et al. [10] reported the ability of CoQ10 supplementation to reduce the circulatory levels of the inflammatory markers (TNF, IL-6, and metallopeptidase 9; MMP-9) in MS patients. However, no assessment was undertaken on the cerebral inflammatory response following CoQ10 supplementation. At present, it is uncertain whether CoQ10 is able to cross the blood-brain barrier (BBB) of humans, and a study by Wainwright et al. [11] has added further support to this supposition. However, in this study, it was suggested that uptake of exogenous CoQ10 into the brain may be enhanced by the administration of LDLR inhibitors, or by interventions to stimulate the luminal activity of the Scavenger Receptor, SR-B1 transporters. Furthermore, the use of analogues of CoQ10 such as idebenone or MitoQ, which have the ability to cross the BBB, may also be judicious in the treatment of neuro-immune dysfunction, although these synthetic quinones may not have the same beneficial effect on the immune system as CoQ10 [10]. The CoQ10 status of individuals may also be an important determining factor in susceptibility to COVID-19 [12] in view of the suggested ability of CoQ10 to impair virus replication [13], ameliorate oxidative stress [3], modulate the inflammatory response [9], and optimize lysosomal function [14]. Although, the ability of CoQ10 to enhance the mitochondrial function of leukocytes may also be an important factor to consider [7]. 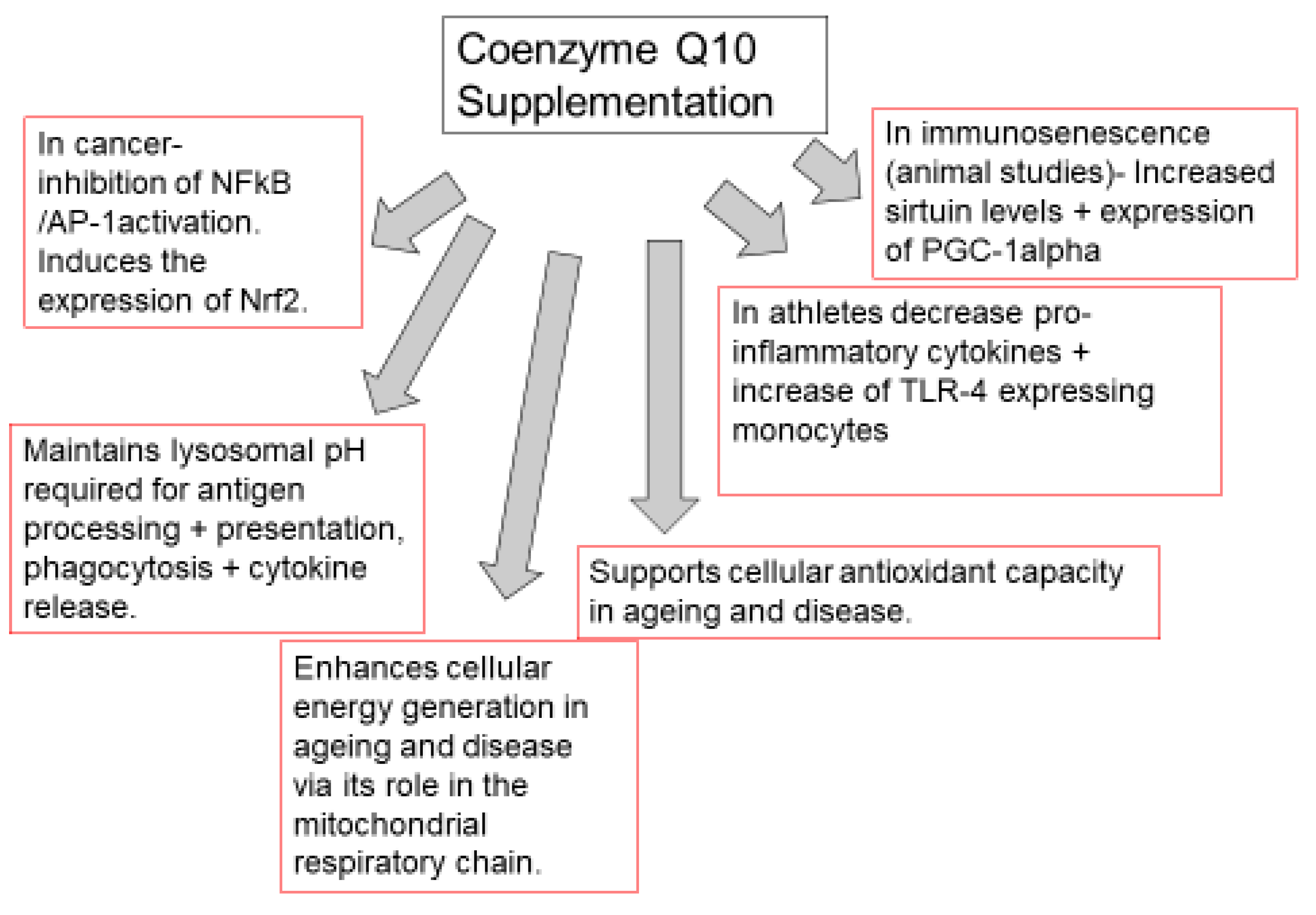 Figure 2. Functions of coenzyme Q10 supplementation in immunopathy, ageing, cancer, and immune function in athletes. TLR-4: toll-like receptor 4 (TLR-4). NFkB: nuclear factor kappa B; AP-1: Activator protein-1. PGC-1 alpha: peroxisome proliferator-activated receptor coactivator 1 alpha. Nuclear factor erythroid 2-related factor 2.
Supplementation with CoQ10 can be a cost-effective treatment for a variety of disorders [3]. For example, 150 capsules of Bio-Quinone 100 mg CoQ10, a food supplement manufactured to pharmaceutical standards, currently retails at £76 in the UK, equivalent to a cost of 50 pence per capsule; with a recommended dosage typically in the range of 100–200 mg per day, this equates to a treatment cost of 50 pence to £1 per day. It should be noted that the majority of CoQ10 products are sold as food supplements, which in contrast to licensed pharmaceutical products, can vary considerably in both quality and price; only one CoQ10 product (Myoquinon, the licensed version of Bio-Quinone) currently has a marketing authorisation within the European Commission for the adjunctive treatment of heart failure.
Overall, further studies are required to elucidate the optimal doses and plasma levels of CoQ10 required to optimize immune function and mediate inflammation, so that appropriate treatment protocols can be established.

Administration of supplemental CoQ10 has been shown (on the basis of randomized controlled clinical trials) to benefit a number of disorders, especially the prevention [15] or treatment [16] of cardiovascular disease, but also diabetes [17], non-alcoholic fatty liver disease [18], and chronic kidney disease [19], as well as some neurological disorders [20]. In particular, the use of supplemental CoQ10 for the treatment of heart failure has become well-established based on such evidence. However, when activation of the immune system is quoted as a benefit of CoQ10 supplementation, such statements are rarely supported by documentary evidence referenced from the peer-reviewed medical literature, thus necessitating a review of the type given in the present article. Relatively little data are available from clinical studies demonstrating direct activation of components of the innate or adaptive immune systems by CoQ10, and further studies in this area would be of value. However, CoQ10 has a number of characteristics of relevance to immune function; whilst the anti-inflammatory role of CoQ10 has become increasingly recognized, the role of CoQ10 in lysosomal and peroxisomal function during the immune response represents areas that would benefit from further research.

More
© Text is available under the terms and conditions of the Creative Commons Attribution (CC BY) license (http://creativecommons.org/licenses/by/4.0/)
Upload a video for this entry
Information
Subjects: Biology
Contributor MDPI registered users' name will be linked to their SciProfiles pages. To register with us, please refer to https://encyclopedia.pub/register :
Iain Hargreaves
View Times: 182
Revisions: 3 times (View History)
Update Time: 27 May 2021
Table of Contents
1000/1000
Hot Most Recent