Tryptophan (TRP) is one of the essential amino acids, which participates in protein synthesis. The tryptophan’s main metabolic route is the kynurenine pathway (KP) through which approximately 90-95% of TRP degrades into nicotinamide adenine dinucleotide (NAD+) and other bioactive metabolites. The appropriate amount of NAD+ is essential to maintain the operation and the viability of cells. The other molecules are neurotoxic, neuroprotective, oxidant, antioxidant, and/or immune modifiers. They play an important role in the function of the brain and the peripheral tissues. The change in the levels of the bioactive molecules is considered to contribute to the development of a wide range of illnesses from cancer to immunologic, neurodegenerative, and psychiatric diseases.

TRP is a precursor to essential biomolecules such as NAD+, serotonin (5-HT), and melatonin (MT), among others. 5-HT and MT are synthesized through the methoxyindole pathway. However, only 1-5% of TRP is degraded in the route [1]. Nearly 95% of TRP is utilized for the KP, leading to the synthesis of NAD+ and other bioactive molecules. NAD+ is a cofactor of the electron transport in the respiratory chain, which is essential for the synthesis of adenosine triphosphate (ATP) [2]. NAD+ also plays a remarkable role in several enzyme reactions and in the brain’s glycogen storage [3]. In addition to NAD+, several bioactive molecules are synthesized in the KP, contributing to appropriate functions in the brain as well in the body. In the past years, researchers have been revealing that these molecules play physiologically important roles in the functions of life and observing disproportional change in the levels of the molecules in illness. Thus, it is considered that KP metabolites play crucial roles in pathogenesis and disease progression [4].

2. The tryptophan-kynurenine metabolic pathway and the kynurenines

The course of the tryptophan-kynurenine pathway is complex. Firstly, L-TRP is converted by indoleamine 2,3-dioxygenase 1 and 2 (IDO-1 and IDO-2) and tryptophan 2,3-dioxygenase (TDO) to N-formyl-L-kynurenine which is degraded by formamidase to L-kynurenine (L-KYN). L-KYN is metabolized to kynurenic acid (KYNA) by kynurenine aminotransferases (KATs), to 3-hydroxy-L-kynurenine (3-HK) by kynurenine 3-monooxygenase (KMO), and to anthranilic acid (AA) by kynureninase. KATs also degrade 3-HA to xanthurenic acid (XA), which is degraded to cinnabarinic acid (CA) by autoxidation. 3-HK and AA are converted by kynureninase or in non-specific hydroxylation to 3-hydroxyanthranilic acid (3-HAA), respectively. 3-HAA is converted to picolinic acid (PIC) by the 2-amino-3-carboxymuconate-semialdehyde decarboxylase and quinolinic acid (QUIN) by 3-hydroxyanthranilate dioxygenase. Eventually, QUIN transform to nicotinic acid ribonucleotide, then nicotinic acid adenine dinucleotide, leading to the formation of NAD+, which is a feedback inhibitor of TDO (Figure 1). 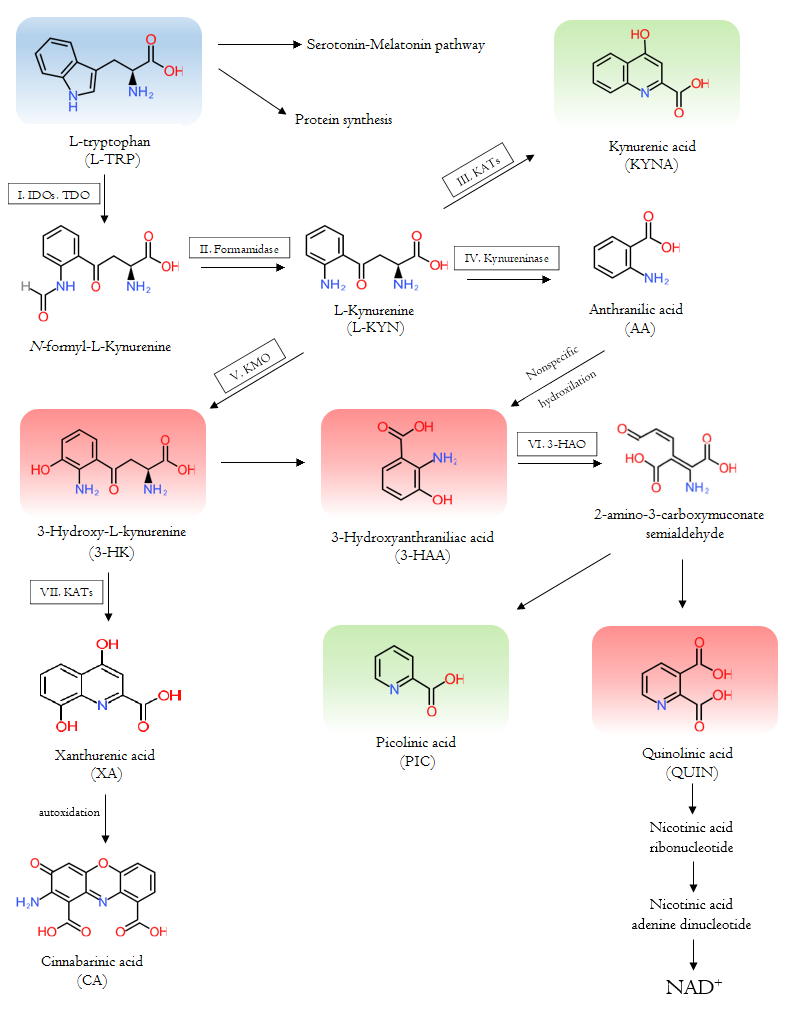 3-HK, 3-HAA, and QUIN are neurotoxic metabolites, while KYNA and PIC are neuroprotective counterparts [3]. 3-HK and 3-HAA generate reactive oxygen species (ROS) and cause lipid peroxidation [5]. However, 3-HK could act as a natural endogenous antioxidant in different diseases like glutaric acidemia type I [6]. The accurate role of 3-HK is complex and not completely clarified. QUIN is a competitive excitotoxic agonist at the N-methyl-D-aspartate (NMDA) receptors, contributes to ROS synthesis, induces synaptosomal glutamate release, and inhibits the astrocyte’s glutamate update. In addition, QUIN is a gliotoxic, neurotoxic, pro-oxidant, and pro-inflammatory mediator molecule [2]. Overall, neurotoxic metabolites can raise the level of oxidative stress [4]. KYN, KYNA, XA, CA, and PIC have immunomodulatory properties in vitro. PIC showed antiviral, antimicrobial, and antifungal activities in vivo and in vitro [2]. KYNA is an endogenous NMDA receptor, alpha (α)-amino-3-hydroxy-5-methyl-4-isoxazolepropionic acid (AMPA) receptor, and kainate receptor antagonist [3]. In lower concentration, KYNA binds to the strychnine insensitive glycine binding site in a competitive or non-competitive way, while in higher concentration it binds competitively to the glutamate-binding site of the NMDA receptors [2]. In the latter manner, KYNA inhibits the overexcitation of the glutamatergic signal transduction [7]. KYNA may stimulate AMPA receptors in nanomolar to micromolar concentration, while it can inhibit them in millimolar concentration. In addition, KYNA prevents the kainate receptors in higher concentrations [2]. KYNA has antioxidant, anticonvulsant, ROS scavenging, and inflammatory suppressing properties as well [8][9]. Besides to its actions on the NMDA and AMPA receptors, KYNA can increases energy utilization by activating G protein-coupled receptor 35 (GPR35). GPR35 is predominantly detected in immune cells and in the gastrointestinal tract. The process leads to stimulating lipid metabolism and anti-inflammatory gene expression [10]. Furthermore, KYN metabolites are endogenous ligands of the aryl hydrocarbon receptors (AhR), contributing to the proliferation of Treg and Th17 cells, T-cell apoptosis, and diversion of the Th1/Th2 response [11]. In recent years, several studies have revealed the shift in KP metabolites in various diseases [3].

Previous studies showed that alterations in TRP metabolism were associated with tumors and immunologic, neurodegenerative, and psychiatric diseases. The enzymes of the KP were observed up-regulated in tumor cells of the brain, breast, and pancreas [12]. Patients suffering from cutaneous malignant melanoma showed significantly lower levels of 3-HK and 3-HAA but a higher level of KYN [8]. Colon cancer cells showed an increased level of KYN but decreased levels of the other metabolites [12]. In immunologic diseases rheumatoid arthritis and systemic lupus erythematosus showed the increases in some KP intermediates [11]. 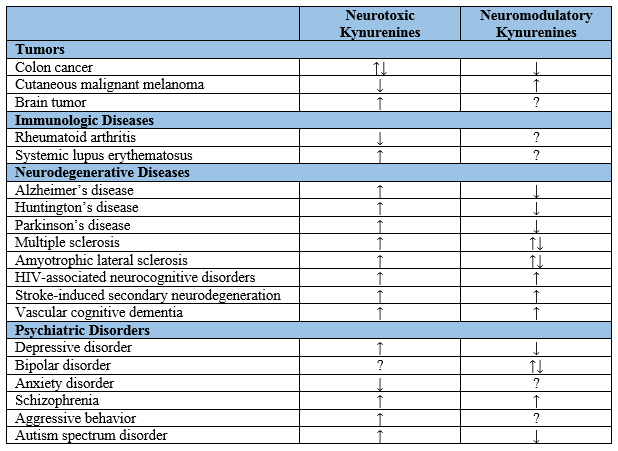 KYNA is gaining an increasing attention as a potential endogenous neuroprotective agent. However, KYNA barely crosses the blood-brain barrier (BBB) and is eliminated in a short time from the body in the urine [2]. Administration of KYNA derivatives was proposed to prevent the progression of neurodegenerative and inflammatory processes [13]. The synthesis of different KYNA prodrugs and KYNA analogues which are highly penetrable to the BBB and remain longer time in the body has been attempted recently [2]. The peripheral or the oral administration of KYNA precursors was found to lead to neuroprotection in an animal model of HD and a hypoxic-ischemic animal model. Synthetic KYNA analogues showed similar neuroprotective properties as endogenous KYNA. For example, intrahippocampal 5,7-di-Cl-KYNA injection prevented the behavioral manifestation in a rat model of status epilepticus [3].

Alteration of KP metabolites and its effects on the neural and cellular function are to be explored further in the future. Understanding a role of the KP in illness may lead to possible development of biomarkers. Modifying KYNA levels may be a potential approach to normalize TRP metabolism and prevent excitotoxic and inflammatory processes. It is intriguing that increased KYNA levels were observed in patients with SCZ and thus, it is considered that KYNA contributes to the pathogenesis of SCZ. Further investigation will reveal actions of KYNA in different concentrations and its beneficial use against various conditions. In addition, understanding the role of the KP in diseases may open further perspectives for the development of personalized diagnostic and therapeutic measures. Developing KYNA analogues, prodrugs, and interventions in the KP enzymes may continue to be a major challenge for researchers; however, discovery of an effectual approach to the KP will be a substantial leap in the fight against diseases affecting a large number of populations.