Flexible Electronic System (FES,) known as flex circuits, have been growing rapidly in industries and organisations such as medical healthcare, energy and power, aerospace, industrial automation, military and defence, sports and entertainment are now the array of various devices are generally comprised of organic substances as a substrate.

Over the last few decades, Flexible Electronic System (FES,) known as flex circuits, have been growing rapidly in industries and organisations such as medical healthcare, energy and power, aerospace, industrial automation, military and defence, sports and entertainment are now the array of various devices are generally comprised of organic substances as a substrate. These substrates create flexible devices which are not only usually characterized by their flexibility, but also their lightweightedness, durability and energy efficiency and are, resultantly, becoming recognized for their huge relevance to healthcare and medical products as well as for defence and wearable electronics. According to a market survey by Research Nester, published in “Global Flexible Electronic Market Overview”, the flexible electronic market annual growth rate is anticipated to expand 19.7% over the period 2017–2024 [1] and is estimated to reach over 30 billion USD in 2028 [2]. For certain electronic and communication applications, the flexibility of different materials is of great importance with extensive use demonstrated in flexible displays, smart tags, wearable products and flexible antennas [3][4]. Accordingly, researchers have incorporated a variety of materials for providing improved flexibility in electronic systems, including the application of polymers, plastics, paper, textiles and fabrics as substrates of these systems. Each of these materials has its own characteristics in terms of how efficiently they can be safely bent, twisted and/or crumpled.

Flexible electronics have become essential for applications requiring flexible displays and biomedical applications with complex curvilinear structures [5][6]. Correspondingly, researchers have experimented on many materials to provide increased flexibility in electronic systems, including polymers, plastic, paper, textiles and fabrics as a substrate of these systems. Each of these materials has its own individual characteristics in terms of how efficiently they can be bent, twisted and/or crumpled [7]. The bendability and flexibility characteristics of these materials make them advantageous for incorporation in designs for future smart electronics systems including application in the Internet of Things (IoTs).

For certain electronic and communication applications, the flexible characteristic of different materials is of great importance, with extensive use spreading into flexible displays, smart tags and wearable products as well as the flexible antenna developments [3][4]. Indeed, the flexible displays and antenna systems are now considered an essential part of personal communication, industry, military, and telemedicine. These flexible devices have many utilizations in health monitoring systems, aeronautics and RFID tagging applications [8][9][10][11][12][13][14][15][16]. Flexible circuits, such as carbon-nanotube thin films on plastic substrates, provide a conformal and lightweight construction. These flexible integrated circuits have many potential areas of application in embedded systems and other areas of electronics [17] with various types of flexible RFID tags are already in widespread use [18][19]. Recent examples of flexible electronics include stretchable organic solar cells which can be used as biological sensors, active-matrix displays and stretchable power sources [20]. Some other novel applications more recently on the market include flexible displays and touch screens [21], electronic paper [22] and skin-like sensing robotic systems [4][23][24], just to name a few.

While flexible electronic devices are constructed with flexible materials such as polymers, plastic, laminates, conductive foils and fabrics, their systems, the FES, can be categorized into four main constructive parts: substrate, backplane, front panel and encapsulation (see Figure 1) which illustrates these four major parts of the FES. The appropriate selection of the first part “substrate”, the base material upon which the whole circuit is produced, is critical. The second part is the backplane, which is a Printed Circuit Board (PCB) with slots for connecting electronic components. The third part, the front panel, is customarily a metal sheet that supports the components and allows certain alteration to system components. An encapsulation layer, which encloses circuitry with a protective covering, is the final component. All of the FES parts must have some degree of bending capability without which it would conflict with the normal function of the FES. 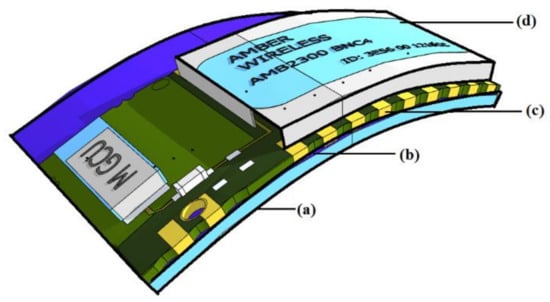 The Wireless Body Area Network (WBAN) provides communications between body-worn devices and devices in the surroundings. These wearable devices include smart tags such as Radio Frequency Identification (RFID) tags and flexible wearable antennas. The emergence of the WBAN is coming out to combine FES and body-worn devices that can easily be mounted on the human body to allow humans to wear antennas and smart tags instead of carrying them. Research on the development of flexible wearable devices such as antennas and smart tags on a flexible substrate is, therefore, a fascinating area in need of further investigation.

Presently, with the exponential development of these wearable sensors and devices and the high demand of the flexible communication systems, various new challenges have arisen because of the unconventional performance requirements. The typical example, and the relevance to this paper, includes wearable electronics with flexible antennas [25], so it is very important for the flexible antennas to be lightweight, small, durable, moist and heat resistant and most importantly highly flexible without distorting radiation characteristics. For this reason, this investigation focuses on the flexibility and seamless integrity of the flexible antennas.

Traditional antennas are customarily made of conductive wires or by etching metal patterns on rigid substrates. When subjected to stretching or are folded or twisted, these types of antennas become permanently deformed, if not broken, which renders them incompatible for applications that require high bendability and are subject to continuous deformation. Flexible antennas have gained much attention in recent years with their advantage of directly addressing this problem with their high flexibility, but also for their convenient integration with other microwave components [26], lightweightedness, energy efficiency, reduced fabrication complexity, easy mount-ability on conformal surfaces, their low cost and for the abundant availability in the form of substrate films [27]. The concept of flexible wearable antennas has emerged from the progressive evolution of the Flexible Electronic System (FES).

The history of materials used to provide flexibility in devices dates back more than half a century (see Table 1). Six decades ago, flexible single-crystalline silicon solar cells were implemented on satellites. These materials were bendable, non-breakable and shaped conformably [36][37]. A Thin Film Transistor (TFT) made of Tellurium was developed in 1968 on a piece of paper. In the same year, T.P Brody presented Mylar, Polyethylene and anodized Aluminum wrapping foils substrates [38]. In the mid-1980s, researchers achieved the highest ever curvature of any flexible electronic circuits.

During the 1980s, it was observed that the resulting circuit performance was not affected with as much as 1.6 mm in the curvature of the flexible substrate [89][90]. Polymers were deemed materials for insulating before the discovery of conductive polymers. After the discovery of Poly-acetylene in 1977, interest in conductive polymer materials in industries increased dramatically [91]. The development of Hydrogenated Amorphous Silicon Indium Tin Oxide (a-Si: H/ITO) cells on an organic polymer was another milestone in the advancement of flexible materials [92][93]. Japan developed Plasma Enhanced Chemical Vapor Deposition (PECVD) machines in the mid-1980s that provided a base for Si–H solar cell fabrication and led to the active-matrix liquid crystal display (AMLCD) industry in Japan. Moreover, in the 1990s, flexible polyimide was of interest because of its flexibility, low cost and thermal endurance. Constant et al. [53] fabricated a Si–H TFT circuit on a flexible polyimide substrate in 1995 which was significant because this was the first time photolithography was used to affix Si–H TFT on rigid silicon to form a polyimide film [94][95].

In 1996, a hydrogenated silicon Si: H/TFT was made on a flexible stainless-steel foil [94]. In 1997, a Polycrystalline silicon (Poly–Si) TFT was successfully applied to a plastic substrate using laser annealing technology. In 2005, a rollable electrophoretic display was presented by Philips and in 2006, Samsung announced a 7-inch flexible liquid crystal panel [96][97]. Furthermore, in 2006, Universal Display Corporation and the Palo Alto Research Centre presented a prototype flexible organic light-emitting diode (OLED) display which exhibited full colour and high resolution. It was constructed using a Poly–Si TFT backplane made on steel foil [98]. In 2008, Franky et al. [22] developed a White OLED (WOLED) on a 55-inch flat panel display using a vacuum deposition process. Then, in 2012, Indium Gallium Zinc Oxide (IGZO) was used as a backplane material which, advantageously, was compatible with flexible LCDs. Poor et al. [99] presented flexible displays on a plastic substrate in 2012 for smart Televisions.

Over the last seven years, there has been a boom in the world of flexible electronic and wearable devices. From 2013–2020, flexible electronic devices such as flexible smart sensors, RFID tags, flexible reconfigurable antennas, flexible energy harvesting circuits and wearable technology brought a remarkable change in the healthcare, medical, industrial and entertainment sector. According to a report published by IDTech, forecasts from 2020–2030, indicated that the decade would be a great challenge for all companies producing wearable electronic devices including smartwatches, hearable aids, smart clothing, skin patches, Virtual Reality (VR) devices for general IoT applications [100]. Indeed, although IoT aims to connect everything to everything, the interface to this communication (the antenna) demands to be as flexible and easy to use as much as possible. A class of materials that allow flexibility and hence enable cheap and flexible deployment of antenna designs for faster and more practical IoT applications is further investigated here.