At present, 125 million people are aged 80 years or older. By 2050, there will be almost 434 million people in this age group worldwide. Between 2010 and 2060, the number of people aged above 65 years will increase from 17.4% to 29.5% of the total population[1]. One in two women and one in five men over 50 years of age will suffer an osteoporotic fracture. During the year 2000, there were an estimated 9 million new fragility fractures worldwide, of which 1.4 million were symptomatic vertebral fractures[2]. Osteoporotic spine fractures (OSF) are more common in women compared to men (a 4:1 ratio). They cause severe pain, disability, deformities, and even death. This has a significant impact on their activities of daily living (ADLs) and quality of life (QOL)[3][4]. Hence, OSF are gaining well-deserved recognition in the medical field[5]. Osteoporotic fractures exert a tremendous burden on older people and healthcare budgets.

Biomechanics of the Spine 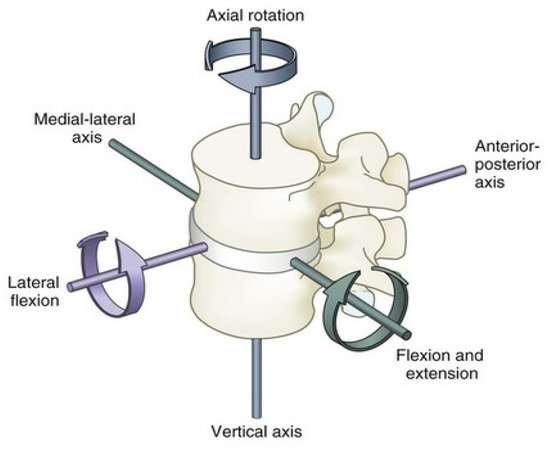 Figure 1. Standard range of movements for the human lumbar spine.

The overall ROM of the lumbar spine itself is usually supported by two main groups of muscle. We may classify them as the anterior and the posterior groups of muscle. Models of the human spine suggest that the lumbar spine can be modeled as one additional joint in the contribution for flexion and extension on the sagittal plane[6]. Lumbar spine ROM parameters are as follows: flexion 40–60 degrees, extension 20–35 degrees, lateral bending 15–20 degrees, and axial rotation 3–18 degrees.

The posterior spinal muscle group consists of a thick superficial layer of thoracolumbar fascia, which is attached to the spinous processes and the supraspinous ligaments. It extends bilaterally to cover the erector spinae muscles (the iliocostalis, longissimus, spinalis muscles). Beneath this thick fascia lies the erector spinae muscles which arise from the sacrum, iliac crest, and the spinous processes of the thoracolumbar spine. They act as part of the posterior column. Together with the facet joint and posterior ligamentous complexes, these muscles form the posterior tension band for spinal stabilization, and, most importantly, they are also the main muscles for thoracolumbar spine ROM.

The anterior group of spinal muscles consists of the quadratus lumborum and the psoas major muscles. They do not contribute to the overall spinal stability, but they help with ROM of the spine. Hence, the posterior muscle group is considered the principle muscle group for thoracolumbar spinal movements (see Figure 2).

The mean back extensor strength of human lumbar spine decreases with age, and it measures from 284 N, to 267 N, 262 N, and 172 N for females in age groups between 40–49, 50–59, 60–69, and 70–79, respectively[8]. The posterior spinal muscles play a crucial role in the posterior tension band that maintains our normal posture by balancing the biomechanical tendency of the spine to fall forward. This function coincidentally reduces mechanical stress on the vertebral bodies[9].

Flexion-relaxation of the posterior spinal muscles occurs in positions of quiet standing with substantial trunk flexion. One study found that the myoelectric activity (EMG) is diminished on 40 degrees flexion of the lumbar vertebrae, and it is nearly absent in quiet standing at maximum flexion, i.e., no further muscle contractions are required. The forces required to maintain the equilibrium at the full range flexion, provided by the passive muscle tissue, tendons, and ligaments, were measured to be 700 N[13].

Treatment of OSF can be classified as surgical or non-surgical, depending on the morphology of the fracture pattern as well as the clinical condition of the patient. Stable fracture patterns include those of vertebral body compression fractures which involve only the anterior spinal column while the posterior muscular–ligamentous complex remains intact[14][15]. These stable OSF are treated non-surgically.

The start of non-surgical treatment for stable OSF usually consists of initial bed rest, analgesia, early physiotherapy, early rehabilitation, and a rigid spinal brace (orthosis). Pain related to the OSF may last up to 4 months[16]. Spinal braces are usually applied for a minimum of 3 weeks and up to 12 months, depending on the patient’s symptoms and the fracture healing progress[17][18][19][20]. Patients are encouraged to apply the spinal brace at all times unless they are lying down, for example, during bedrest. Typically, these braces are usually fixed and rigid (for example, TLSO, thoracolumbar spinal orthosis, see Figure 3)[21]. 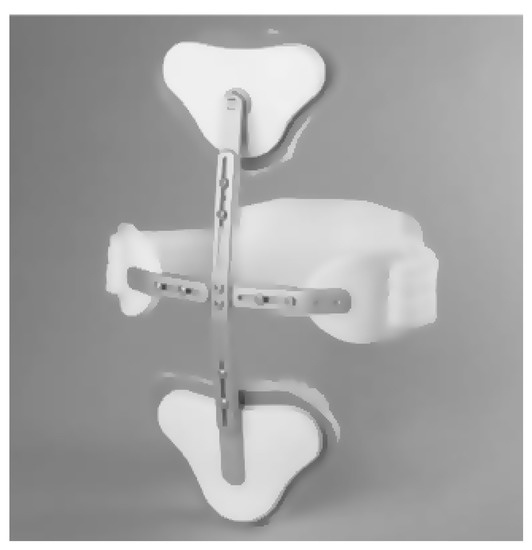 Progressive vertebral body collapse is a known complication for patients with OSF. It is a potential complication due to lack of proper spinal support. This may eventually result in progressive kyphotic deformity of the spine. Radiologically, this is regularly seen as worsening kyphosis of the spine on follow-up, when compared to initial radiological images taken at time of injury. Hyper-kyphosis of the spine itself imposes further stress on the anterior spinal column. This increases the risk of new fractures and disrupts normal balance, thereby increasing the risk of falls and, as a result, other injuries and fractures[22]. The most important point to note is that progressive vertebral body collapse with kyphotic deformity may result in conversion of a benign OSF into a burst fracture type pattern, which will lead to neurological compromise from a spinal cord with cauda equina compression.

The goals of traditional orthotic treatment involve a combination of limiting motion and correcting posture, thus reducing pain and fatigue, and improving overall function or participation at rehabilitation. A spinal brace in OSF can prevent pain from truncal movements by stabilizing the spine[23] through axial spinal support and reducing the effort of the para-spinal muscles. This in turn will promote fracture healing[24] (see Figure 4). The effects of these braces on the stabilization of the injured vertebral body have been demonstrated by previous biomechanical studies[9][25][26]. In the meantime, early (within a few days of injury, if possible) mobilization of this group of patients is recommended, as it will significantly avoid the complications of prolonged bedrest[27].

As mentioned above, the posterior spinal muscles are an important part of the human posterior tension band, which maintains the truncal posture. Thus, strengthening the posterior spinal muscles will improve lumbar lordosis and posture and will reduce acute fracture pain as well as chronic back pain associated with kyphotic deformity from progressive vertebral body collapse[19][28]. This reinforcement is especially important since axial musculature decreases in strength with age, particularly among women, who are most at risk for OSF[29]. Studies have also demonstrated that back extension strength and lumbar mobility are the most important factors for quality of life compared to other relevant factors such as lumbar kyphosis angle and bone mineral density, especially in females with osteoporosis[30].

While rigid spinal braces are widely prescribed in the conservative, non-surgical management of OSF, there is a lack of high-quality evidence for their effectiveness. Traditional rigid spine braces aim to restore the normal curvature of the spine by applying a set of displacements at different levels of the torso, which are typically achieved by adjusting the geometry of the brace or adding soft pads inside the brace. This process relies mostly on bi-planar radiographs of the spine taken in the sagittal and coronal planes, surface topography of the torso, and the experience of the orthotist who has limited quantitative data.

A recent meta-analysis looking at the effect of a brace on OSF concluded that a Spino-med orthosis, which work with a concept of improving the strength of users’ trunk muscle, unlike traditional rigid braces which offer immobilization of the spine, may subsequently reduce pain, reduce kyphosis angle deterioration, and improve quality of life[16]. However, due to the high risk of bias in the blinding process and outcome assessment in the included studies, only low-quality evidence proved using Spino-med braces could bring large and significant beneficial effect to patients with subacute osteoporotic vertebral fractures[19]. Spinal braces are part of the conservative, non-surgical care regime for conservatively managed OSF and have been compared to external support provided by a variety of orthoses or casting. As a result, it is not possible to properly quantify a comparison between the designs, and it makes the true treatment effect of an orthosis difficult to elucidate. There are also wide variations in terms of outcome measurements and the duration of brace application in different studies. Currently, there is no study which evaluates the long-term outcomes of the traditional rigid spinal brace application.

Although spinal braces for OSF are known to improve trunk muscle strength, posture, and body height, all which will improve quality of life and ability to perform activities of daily living (ADL) for patients with OSF[30], these rigid spinal braces have a number of limitations due to their rigid, static, and sensorless features. The rigidity of the brace makes it difficult to wear over extended periods of time, and it interferes with ADLs. User compliance will subsequently become a main issue. The braces statically hold the torso in a set posture without detection of the forces/moments exerted on the torso. These excessive forces are known to cause skin breakdown, pressure sores, and even worsening of spinal deformities[31][32]. The lack of freedom of control of the correction provided by the brace at the coronal and sagittal planes makes it difficult to adapt to natural changes of the spine and may impair healing and lead to diminished effectiveness. Non-static braces have been designed to address some of these limitations. However, non-static braces are only useful for temporary relief of symptoms. As they do not provide spinal support, their function in preventing progressive kyphosis, for example in patients post-OSF and especially at the junctional thoracolumbar levels, is known to not be effective[16].

A systemic review of spinal braces in OSF showed no evidence to support the regular use of rigid TLSO[33]. Potential downfalls of a rigid spinal brace such as TLSO are well documented in literature. As mentioned above, these include patient discomfort, which may decrease compliance. There are also risks for skin breakdown if the brace edges are not carefully padded. In addition, a brace that is too restrictive may impede the patient’s respiratory volume and effort and may eventually lead to chest infections. With prolonged periods of bracing, there is also a high chance for deconditioning and atrophy of the trunk and erector spinae muscles, which in turn will lead to increased risk of future falls and further injuries and/or fractures[16][21][29][33][34].

A semi-rigid backpack or bell-style thoracolumbar orthosis (TLO) could reduce pain and improve participation in activities of daily life[24]. A weighted orthosis seems to improve balance, while there is little to no current evidence to suggest that bracing will negatively affect wedging and kyphotic progression of the spine in OSF[17][33].