The Pathology of Parkinson’s Disease

Parkinson’s disease (PD) is a progressive neurodegenerative disorder that is characterized by a loss of dopaminergic neurons, leading to bradykinesia, rigidity, tremor at rest, and postural instability, as well as non-motor symptoms such as olfactory impairment, pain, autonomic dysfunction, impaired sleep, fatigue, and behavioral changes.

More than two centuries ago, in 1817, James Parkinson first described the disease with his namesake in his essay, An Essay on the Shaking Palsy [1]. Parkinson’s disease (PD) is a slow progressive neurodegenerative disorder that predominately affects dopaminergic neurons in the substantia nigra pars compacta (SNpc). PD is a debilitating condition caused by a mixture of genetic and environmental factors affecting various neuroanatomical sites and begins years before the diagnosis can be made [2]. The early disease can be divided into three stages: (i) Preclinical PD, the beginning of neurodegenerative processes but lack evident signs or symptoms; (ii) prodromal PD, the presence of signs and symptoms, however insufficient to define disease; and (iii) clinical PD, with diagnosis of PD based on the presence of classical motor signs [3] . Bradykinesia, rigidity, tremor at rest, and postural instability are the cardinal signs of PD [4]. However, non-motor symptoms such as olfactory impairment, pain, autonomic dysfunction (orthostatic hypotension, GI dysfunctions), impaired sleep, fatigue, and behavioral changes (depression, anxiety, apathy) are also observed [5].

2. Prevalence and Incidence of Parkinson’s Disease

The brain in PD is often unremarkable macroscopically with mild atrophy of frontal cortex and ventricular dilation. The characteristic morphological change in the PD brain appears in the transverse section of the brainstem with loss of darkly pigmented areas in the SNpc and locus coeruleus (see Figure 1 for diagram of the brain). This loss is correlated to the death of dopamine (DA) neuromelanin containing neurons in SNpc and noradrenergic neurons in locus coeruleus. The ventrolateral tier of neurons of pars compacta (A9) is mostly marked in neuronal loss in the substantia nigra (SN), while dorsal and medial neuronal cells are less susceptible [15]. 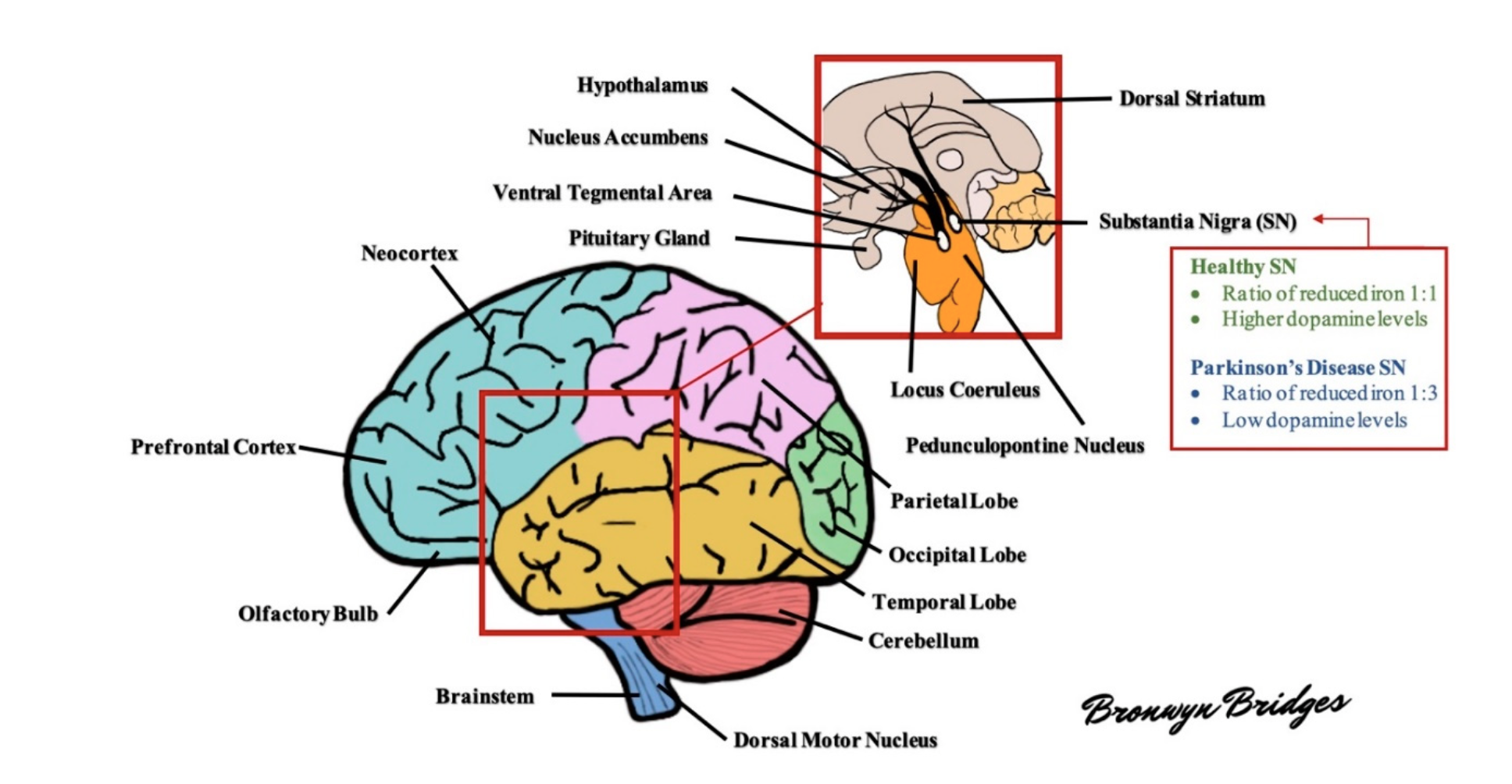 Figure 1: Schematic diagram of the human brain. Several areas of the brain are adversely affected in Parkinson's disease. For example, the substantia nigra exhibits a profound loss of dopaminergic neurons and altered levels of reduced iron, likely as a result of increased oxidative stress. As the disease progresses, other areas of the brain develop lesions, including the dorsal motor nucleus, neocortex, prefrontal cortex, locus coeruleus, amygdala, and more (see text for further details).

Major pathological hallmarks of PD include the degeneration and death of melanin-containing neurons of SN and Lewy pathology. Lewy pathology comprises the formation of intracytoplasmic Lewy bodies (LB) with inclusions containing mainly α-synuclein and ubiquitin and Lewy neurites (LN), which are the neuronal projections of similar inclusions [16].

Braak and colleagues in 2003 staged PD pathology based on a semiquantitative assessment of LB distribution at postmortem, which revealed that LB pathology spreads rostrocaudally throughout the brain in a chronologically predictable sequence [17]. At Braak stages 1 and 2, LB lesions are seen in the dorsal motor nucleus (IX/X), reticular formation, and anterior olfactory nucleus where patients are considered asymptomatic/presymptomatic. Few non-motor features such as autonomic dysfunctions (constipation), olfactory dysfunction, and sleep-related dysfunction occur at these stages. The disease progression to Stage 3 involves SNpc with LB pathology, and neuronal loss is seen at melanized neurons. The pathology further extends to locus coeruleus and amygdala, ultimately reaching the temporal limbic cortex at Stage 4. During these two stages, typical clinical motor features start to appear. There is involvement of the entire neocortex and areas, including the prefrontal cortex and primary sensory and motor areas in stages 5 and 6 [17][18]. This system is criticized for being based only on the distribution of Lewy pathology but not on neuronal loss [19].

After the motor symptoms appear, nigral DA neuron loss increases to 60% or higher and strongly correlates with the severity of motor features and disease duration. This remarkable cell loss is the denervation of the nigrostriatal pathway, leading to diminished dopamine levels in the striatum. The reduction of dopaminergic signaling is considered responsible for the appearance of the cardinal motor symptoms in PD. Apart from the SNpc, widespread cell loss can be found in several subcortical nuclei, including the locus coeruleus, the nucleus basalis of Meynert, the dorsal motor nucleus of the vagus nerve, the pedunculopontine nucleus, the raphe nuclei, the hypothalamus, and the olfactory bulb [20]. Multiple non-dopaminergic neurotransmitter systems are affected, such as the cholinergic, glutamatergic, GABAergic, noradrenergic, serotonergic, and histaminergic systems [21].