Brown algae have been part of the human diet for hundreds of years, however, in recent years, commercial and scientific interest in brown algae has increased due to the growing demand for healthier diet by the world population. Brown algae and its metabolites, such as carotenoids, polysaccharides, phlorotannins, and proteins, have been associated with multiple beneficial health effects for different diseases, such as cardiovascular diseases, one of the main causes of death in Europe.

Seaweeds are macroalgae used in different sectors, such as agricultural, horticultural, cosmetics, and food industries. It has been recognized that the novel and potentially bioactive components that algae present make them a good source of healthy food[1][2] World seaweed production doubled between 2005 and 2015. Globally, in 2016, seaweed products were valued at USD 10.6 million, and it is estimated that in 2025 the value of global seaweed products will reach USD 26 million[3]. Asia and the Pacific region dominate 60% of the world algae market, followed by Europe and the Americas[3]. Seaweeds have been used as part of the human diet for thousands of years. Archaeological evidence shows that in Chile it has been used for the last 14,000 years[1], and in Japan and China, there are written records describing the use of seaweed that date back over 2000 years[4][5]. Nowadays, in Europe, seaweed consumption is increasing, not only because people are becoming interested in the uses of natural products, but also because it is seen as a healthy and nutritious “superfood”, which is sold preserved dry, fresh, frozen, canned, or salted[3][6]. Algae are used both as a food supplement and as an addition to functional food. Meat products, cereal-based products, and fermented functional foods, such as cheeses, are the main products in the market supplemented with algae[7]. Statistics from the 2012 global harvest demonstrated that 38% of the 23.8 million seaweed harvest was used for human consumption, without counting the consumption of hydrocolloids derived from algae as agars, alginates, and carrageenans[1][8]. Currently, more than 10,000 species of algae are known, but only about 200 species are consumed worldwide, with the brown algae species being the most consumed, followed by red algae species and then the green algae species[6][9]. Despite the considerable number of brown algae species consumed worldwide, under the European regulation there are only about 23 brown seaweed species authorized for food applications.

2. Hypercholesterolemia and the Actual Treatment

Excess cholesterol in tissues is removed by a pathway known as reverse cholesterol transport (RCT) that transports cholesterol from non-hepatic tissues to the liver for metabolism and bile excretion[24]. The principal lipoprotein involved in the cholesterol efflux from peripheral tissues is the HDL-c and its apolipoprotein (apo) A-I, the major protein in HDL particles[25]. Moreover, there are also three important membrane cholesterol transporters that have a major role in the RCT process: ATP-binding cassette (ABC) transporters A1 (ABCA1) and G1 (ABCG1) and scavenger receptor class B type I (SR-B1)[26][27][28]. The ABCA1 transports the cholesterol to apoA-I, leading to the formation of the HDL-c particles (Figure 1). The HDL particles interact with ABCG1 to incorporate more cholesterol, which is then esterified by the enzyme lecithin-cholesterol acyl transferase (LCAT) (Figure 1)[24][25]. 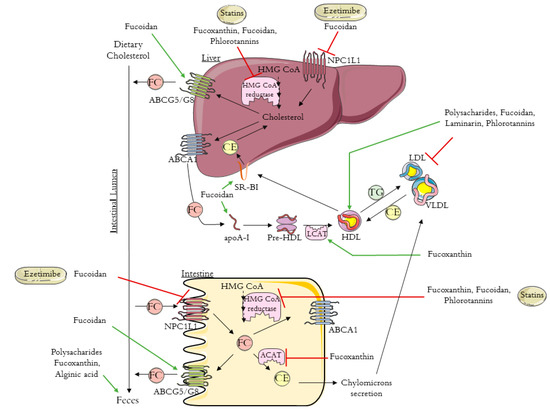 Next, the cholesterol is delivered to the liver by a direct or an indirect pathway. In the direct pathway, HDL binds with high affinity to SR-B1 in the liver and transfers its cholesterol content (Figure 1). By the indirect pathway, the esterified cholesterol (CE) is transferred to apolipoproteins B-100 (apoB-100), to very low density lipoprotein (VLDL), or especially to LDL, in exchange for TG molecules (Figure 1)[24][25]. After this process, HDL-c molecules can re-enter the RCT cycle. Based on this knowledge, it has been proven that the plasma concentration levels of the HDL-c are inversely related to the risk of CHD[24][25][29]. The final step in RCT is the most important mechanism for cholesterol body elimination, since the hepatic cholesterol, free or converted into bile acids, is secreted in the bile and then eliminated via the feces (Figure 1)[29][30].

The first approach to preventing cardiovascular disease and lowering cholesterol levels is lifestyle changes together with drug-based therapy[17]. The two main lipid-lowering drugs used are statins and ezetimibe, which act according to different mechanisms, via the de novo cholesterol synthesis and via the dietary cholesterol absorption, respectively [18][20].

Statins are the first-line drugs for lowering cholesterol levels, and there are currently seven different types approved in the United States: simvastatin, atorvastatin, lovastatin, pravastatin, fluvastatin, rosuvastatin, and pitavastatin. Statins bind to the active site of 3-hydroxy-3-methyl-glutaryl coenzyme A (HMG-CoA) reductase, the rate-limiting enzyme in cholesterol biosynthesis, leading to its inhibition (Figure 1)[36][37]. Consequently, statins cause the upregulation of the expression of LDL receptors, improving the clearance of LDL in circulation[23][33]. It was previously demonstrated that statins increase HDL levels by 5% to 10%[38]. The mechanism that leads to this increase is still not very clear, however, it is already known that some statins improve ABCA1 expression and hepatic apoA-I production, which consequently increase HDL-c formation, leading to the association of statin therapy with enhanced RCT [38][39][40]. Despite the good results obtained with statins therapy, these drugs can cause some adverse effects. There are cases for which the statins treatment is not recommend; for example, some people are intolerant to statins, specifically patients with high cardiovascular risk. One approach to avoid the side effects of statins is to use the combination of statins with non-statin lipid-modifying drugs.

Ezetimibe (trademark name Zetia), the first drug approved after statins, is a potent intestinal cholesterol absorption inhibitor that targets NPC1L1[20][41]. This therapy also presents good results in terms of decreasing LDL-c[42]. Beyond the use of ezetimibe alone, another treatment approach to primary hyperlipidemia is its use in combination with statins, which has a synergistic effect with greater results for the reduction of blood Tc and LDL-c[42].

To prevent hypercholesterolemia and complement the drug treatments with statins, ezetimibe, or other drugs, it is important to look for new potent drugs and/or new therapeutic strategies, such as the use of dietary supplements derived from natural products[16].

3. The Anti-Hypercholesterolemic Effect of Brown Algae

The search for new drugs, nutraceuticals, and dietary supplements based on natural compounds has led to a growing interest in the study of the composition and bioactivity of marine algae[2][43]. Around the world, there are about 1800 species of brown algae (Phaeophyta), showing a variety of size and forms range from small filamentous to large and complex structures[44][45]. Most species of brown algae are exclusively found in oceans dispersed in cold waters along continental coasts and can also be found attached to rocky coasts in temperate zones or floating freely [46][47]. Just 1% of brown algae species can be found in freshwater, which are usually attached to rocks[47]. Brown algae species contain a variety of compounds, such as proteins, minerals, vitamins, alkaloids, sterols, fatty acids, carotenoids, non-digestible polysaccharides, and phenolic compounds, mostly phlorotannins[48][49]. However, the composition of algae is greatly affected by the geographic and atmospheric conditions of their habitat[50]. It is also necessary to take into account that post-harvesting storage and processing, such as extraction using different solvents (water, organic solvent, water–organic solvent mixtures) can also affect the composition of the obtained algae extract[51]. These algae species have been intensively studied not only for their anti-hyperlipidaemic activity [52][53], but also for their anti-tumorigenic[54][55], anti-diabetic[56][57], antiviral[58], anti-inflammatory[59][60], and antioxidant [48][60]capacities, among others.

Different in vivo studies, summarized in Table 2, have reported the hypocholesterolemic effect of different brown algae species[10][14][52][53][54][55][56]. In studies where brown algae extracts were used for diet supplementation or in oral administration, it was reported that, in general, there is a decrease in Tc, TG, and LDL-c levels and an increase in HDL-c levels. In these reports, the effects of brown algae on lipid levels were associated with a possible impact on the cholesterol biosynthesis due to a modulation effect on the high affinity receptor of lipoprotein metabolism[53][61]. In addition, brown algae have been reported to have the capacity to increase cholesterol excretion in feces due to the ability of the algae compounds to bind dietary cholesterol[62]. The mechanisms for the cholesterol-lowering effects of brown algae have not been clarified yet, but have often been associated with the presence of the diversity of compounds identified in these species, which led to the study of the hypocholesterolemic effect of isolated compounds obtained from different brown algae species. The most studied brown algae compounds in this area have been carotenoids, polysaccharides, and phlorotannins, and more recently interest has emerged in the hypocholesterolemic potential of alga-derived proteins and peptides.