Epstein–Barr virus (EBV)-positive mucocutaneous ulcer (EBVMCU)  is a unifocal mucosal or cutaneous ulcer that often occurs after local trauma in patients with immunosuppression; the patients generally have a good prognosis. It is histologically characterized by proliferating EBV-positive atypical B cells accompanied by ulcers.

Epstein–Barr virus (EBV) is a member of the herpes virus family, and is one of the most common human viruses [1]. EBV causes latent infection in humans and it may lead to various diseases, including lymphomas and lymphoproliferative disorders (LPDs) even during the latency period. EBV-positive mucocutaneous ulcer (EBVMCU) is a recently established EBV-associated LPD, established in 2010. EBVMCUs are shallow, sharply circumscribed, mucosal, or cutaneous ulcers that are histologically characterized by the proliferation of EBV-positive, variable-sized, atypical B-lymphocytes. This lesion develops in immunocompromised patients, including those who are of advanced age or have iatrogenic immunosuppression, primary immune disorders, or human immunodeficiency virus (HIV)/acquired immunodeficiency syndrome (AIDS)-associated immune deficiencies. EBVMCU has a good prognosis, unlike other EBV-associated LPDs such as EBV-positive diffuse large B-cell lymphoma (DLBCL). Almost all EBVMCU patients achieve remission with the reduction or discontinuation of immunosuppressants, or a watch-and-wait approach.

EBVMCUs are characterized by localized mucosal or cutaneous ulcers with EBV-positive atypical lymphoid cells accompanied by dense polymorphic infiltration with various inflammatory cells such as plasma cells, histiocytes, and granulocytes. EBV-positive atypical cells range in size from small to large, and may resemble Hodgkin and Reed–Sternberg (HRS)-like cells. Angioinvasion by these cells is often seen in EBVMCUs. In most cases, EBV-positive cells are positive for CD20 and CD79a and exhibit characteristics of B lymphocytes. These cells are usually also positive for CD30, PAX5, OCT2, and MUM1, with variable expression of BOB1. CD15 is expressed in approximately 50% of cases [1][2].

In some cases of EBVMCUs, the pathological findings are similar to those of DLBCL or CHL. A recent study classified EBVMCUs into four morphological subtypes on the basis of histological features [3].

In this subtype of EBVMCU, various small-to-large atypical EBV-positive lymphoid cells, occasionally with a few HRS-like cells, are noted. Atypical lymphoid cells are found in dense clusters or are scattered (Figure 1). Fifty-nine percent of the cases in this study belonged to the polymorphous subtype [3]. 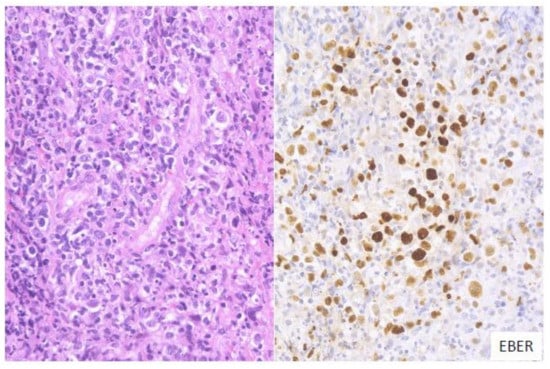 Figure 1. Pathologic findings for polymorphous EBVMCU. A tonsillar EBVMCU in a patient undergoing methotrexate treatment. Atypical lymphoid cells with polymorphous morphology and angioinvasion are seen, and are positive for EBV-encoded small RNA (EBER) (HE and EBER staining; magnification, ×400).

In this subtype, dense proliferation of large and monomorphic atypical EBV-positive lymphoid cells, similar to that in DLBCL, is noted (Figure 2). Twenty-one percent of the cases in this study belonged to the large cell-rich subtype [3]. 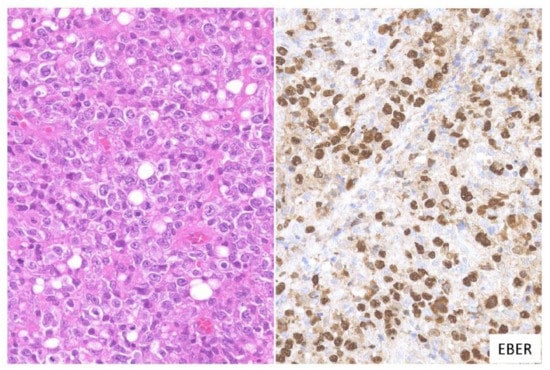 In this subtype, many HRS-like EBV-positive cells and various-sized EBV-positive atypical lymphoid cells, sometimes with epithelioid granulomas or eosinophil infiltration, are noted. The HRS-like cells are positive for CD30, similar to the findings for CHL (Figure 3). Twelve percent of the EBVMCU cases were classified as CHL-like [3]. 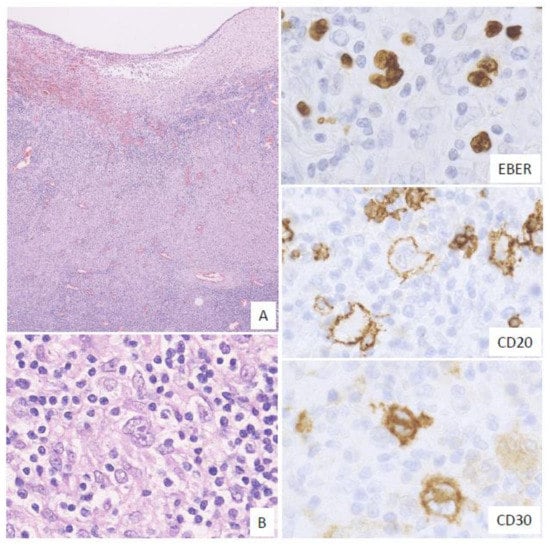 In this subtype, small-to-medium-sized atypical lymphoid cells that show centrocytic-like features and/or plasmacytic features and proliferate in the expanded interfollicular zone are noted (Figure 4). In our previous study, 9% of the EBVMCU cases belonged to this subtype [3]. 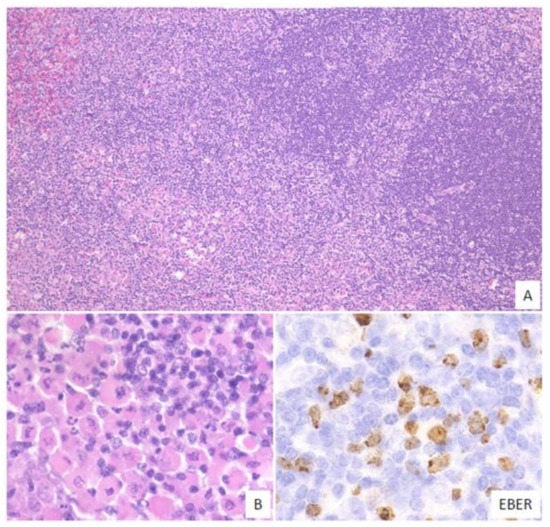 Genetic studies have been performed to characterize EBVMCUs, including the many reports on detection of clonality in EBVMCUs. In 2010, Dojcinov et al. was the first to report that 38% of the EBVMCUs studied exhibited immunoglobulin heavy chain (IGH) rearrangements [4]. Other studies reported that patients with EBVMCUs had a relatively lower frequency of clonal IGH rearrangements than patients with EBV-positive or EBV-negative DLBCLs [3][5]. In our previous study, clonal IGH rearrangements were detected in 44% of the EBVMCUs, 32% of EBV-positive DLBCLs, and 58% of EBV-negative DLBCLs; these differences were not statistically significant. Thus, IGH rearrangements are not useful for distinguishing between EBVMCU and DLBCL.

Clonal T cell receptor (TCR) rearrangements tend to occur more frequently in EBVMCUs than in EBV-positive and EBV-negative DLBCLs [3]. In our previous study, clonal TCR rearrangements were found in 32% of EBVMCUs, 10% of EBV-positive DLBCLs, and 15% of EBV-negative DLBCLs. Another previous study supported this T-cell clonality; in that study, serum CD8+ T cells increased after MTX reduction in patients who had MTX-LPD and achieved complete remission only due to MTX reduction [6]. Another study showed that B-cell post-transplant LPD was associated with clonal expansion of CD8+ T cells [7]. Thus, we considered that EBVMCU might also be associated with T-cell clonal expansion due to reduced immune surveillance.

Some studies suggested that TCR gene rearrangements could lead to a limited T cell repertoire, which triggers EBV infections in the elderly and in immunocompromised patients [7][8]. The leading players in T cell-mediated immune responses are CD8+ mature memory T cells. In the patient population, T cell epitope recognition might be disabled due to dysfunction of CD8+ mature memory T cells and the CD8+ cells could miss the EBV epitope [8]. This T cell dysfunction might lead to an increase in the number of EBV-positive cells.

Recently, programmed death-ligand 1 (PD-L1) has received attention for its involvement in immune evasion systems. PD-L1 expression in cancer cells suppresses T cell activation, allowing cancer cells to escape the immune surveillance mechanism. Previous studies have shown the presence of PD-L1 expression in most cases of EBV-positive DLBCL [9][10][11]; however, PD-L1 expression was absent in almost all cases of EBVMCUs [12][13]. These results suggest that, in contrast to EBV-positive DLBCLs, EBVMCUs may not possess an immune evasion mechanism.