The aryl hydrocarbon receptor (AhR) was first identified as the intracellular protein that 14 bound and mediated the toxic effects of 2,3,7,8-tetrachlorodibenzo-p-dioxin (TCDD, dioxin) and 15 dioxin-like compounds (DLCs). Subsequent studies show that the AhR plays an important role in 16 maintaining cellular homeostasis and in pathophysiology and there is increasing evidence that the 17 AhR is a important drug target. The AhR binds structurally diverse compounds including 18 pharmaceuticals, phytochemicals, endogenous biochemicals some of which may serve as 19 endogenous ligands. Classification of DLCs and non-DLCs based on their persistence (metabolism), 20 toxicities, binding to wild-type/mutant AhR and structural similarities have been reported. This 21 review provides data suggesting that ligands for the AhR are selective AhR modulators (SAhRMs) 22 which exhibit tissue/cell-specific AhR agonist and antagonist activities and their functional diversity 23 is similar to selective receptor modulators that target steroid hormone and other nuclear receptors.

Intracellular receptors such as the nuclear receptor (NR) superfamily play important roles in maintaining cellular homeostasis and in pathophysiology [1][2]. Members of the steroid hormone receptor subfamily were among the first NR’s identified, and the binding and effects of their endogenous hormonal ligands such as 17β-estradiol have been extensively investigated and form a conceptual basis for understanding hormone-hormone receptor action [3]. The aryl hydrocarbon receptor (AhR) is also an intracellular receptor that is a member of the basic-helix-loop-helix (bHLH) family of genes that exhibit a mode of action similar to that described for many NRs [4][5][6]. The cytosolic AhR is bound to several factors, including hsp90, AIP/XAP2 and p23, and treatment with an AhR ligand results in nuclear uptake of the bound receptor complex that forms a nuclear heterodimer with the AhR nuclear translocator (Arnt) protein. This heterodimer interacts with cis-dioxin/xenobiotic response elements (DRE/XRE), which have a core GCGTG pentanucleotide sequence, and this results in recruitment of nuclear cofactors to activate or repress gene expression [4][5][6]. This pathway is similar to that described for several nuclear receptors such as peroxisome proliferator-activated receptors, and retinoic acid receptors, which form a heterodimer with the retinoid X receptor (RXR) [1][2]. These similarities between NRs and the AhR also extend to their increasing number of alternative mechanisms of action, which include binding of receptor complexes to non-consensus response elements; interactions with alternate partners (rather than RXR/Arnt); and acting via extranuclear regions of the cell, including the membrane and cytosol [7][8][9][10][11][12]. Despite the similarities between the AhR and steroid hormone receptors, the AhR was initially identified and characterized as the intracellular receptor not for an endogenous ligand but for 2,3,7,8-tetrachlorodibenzo-p-dioxin (TCDD), a toxic industrial and combustion by-product [13]. Some of the evidence demonstrating that the AhR protein was a receptor included studies showing that the rank order binding affinities of TCDD and structurally related dioxin-like compounds (DLCs) were similar to their rank order potencies for inducing specific toxic responses and as inducers of CYP1A1 [13][14]. Several endogenous ligands that bind the AhR have subsequently been identified, and these include 6-formyl (3,2-b) carbazole (FICZ), 2-(1′-H-indole-3-carbonyl)thiazole-4-carboxylic acid methyl ester (ITE), tryptophan metabolites such as kynurenine and other gut microbial products, and leukotrienes [15][16][17][18][19][20]. These compounds exhibit some tissue-specific modulation of AhR action; however, their role as major endogenous AhR ligands is unresolved. The differences in the initial discoveries of steroid hormone receptors and their endogenous hormonal ligands vs. the AhR receptor, and its high-affinity ligand, TCDD, has tarred the AhR as the receptor associated with toxicity and DLCs. This linkage between the AhR and toxicity has hindered the development of drugs targeting the AhR, whereas up to 13.5% of all developed drugs target NRs [21]. 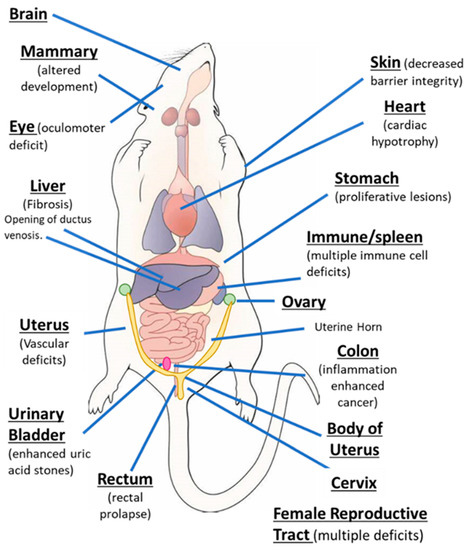 Figure 1. The aryl hydrocarbon receptor (AhR) plays a role in cellular homeostasis in several tissues/organs in the mouse models.

The potential utility of a receptor as a drug target depends on at least two critical factors, namely, that the receptor is expressed (or overexpressed) and has important functions in a diseased target tissue. There are distinct advantages in targeting a receptor. If the functional activity of the receptor enhances or inhibits the disease process then potential receptor ligand therapies include treatment with antagonists or agonists, respectively. There is extensive evidence that the AhR is expressed and functional in multiple tumors, including pancreatic, breast, lung, colon, glioma and other cancer cell lines (rev in [62][63]). For example, knockdown of the AhR in head and neck cancer cells decreases invasion and expression of growth-promoting genes such as amphiregulin, epiregulin and platelet derived growth factor A, demonstrating the pro-oncogenic activity of the AhR. Thus, treatment of these cells with an agonist (TCDD) or the AhR antagonist GNF351 enhances or inhibits, respectively, the pro-oncogenic activity of the AhR [64][65][66][67][68][69]. In intestinal cancer, the loss of the AhR enhances carcinogenesis in mouse models and treatment of wild-type mice with AhR agonists protects against chemical-induced and genetic models of colon cancer [42][43][44][45][46][47]. Studies in this laboratory also showed that the AhR exhibited tumor suppressor-like activity in glioblastoma cells [67]. This was in contrast to a previous report [68], and there are other examples of apparent differences in the functional roles of the AhR in other tumor types. The AhR plays a role in other tumors, and in some cases, the variability in the function of the AhR is due to the use of different model systems.