During the last two decades, tetrabutylammonium bromide (TBAB) has gained significant attention as an efficient metal-free homogeneous phase-transfer catalyst. A catalytic amount of TBAB is sufficient to catalyze various alkylation, oxidation, reduction, and esterification processes. It is also employed as an efficient co-catalyst for numerous coupling reactions. It has also acted as an efficient zwitterionic solvent in many organic transformations under molten conditions. 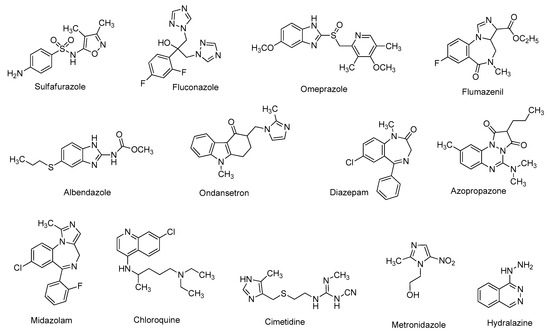 For the synthesis of diverse heterocyclic entities, the screening of suitable catalysts plays an important role [17]. At present, scientists prefer metal-free organocatalysts in order to avoid metal contamination in the synthesized products. As a result, during the last decade, various organocatalysts have gained a great deal of attention in carrying out organic transformations under environmentally benign conditions [18][19][20]. Among many others, metal-free phase-transfer catalysts are being widely used in various organic reactions due to their ecofriendly, mild, and biocompatible nature [21]. Various phase-transfer catalysts showed immense activity in reactions where a reactant soluble in the organic phase needs to react with an anionic reactant soluble in the aqueous phase.

Recently, tetrabutylammonium bromide (TBAB) has gained tremendous attention as an efficient homogeneous phase-transfer catalyst. TBAB is an environmentally benign, non-volatile, non-flammable, non-corrosive, low-cost, commercially available ammonium salt with high thermal and chemical stability [22]. In TBAB, tetrabutylammonium salt can dissolve in both aqueous as well as in organic solvents, which helps to transport the water-soluble anionic reactants into the organic phase. Moreover, molten TBAB was also employed as an efficient ionic liquid to carry out organic transformations under solvent-free conditions [23][24][25]. In some reactions, it was observed that the addition of a catalytic amount of TBAB as co-catalyst enhanced the reaction rate as well as product yields [26][27][28][29][30]. The abovementioned unique capabilities of TBAB make this catalyst very attractive. In many occasions, normal monophasic catalysts either failed to carry out such reactions or afforded poor yields. As a result, the catalytic activity of TBAB has been continuously explored for various reactions. It showed excellent catalytic efficacies for the synthesis of N-aryl amines [31] and 1-alkyl/aryl-2-(1-arylsulfonyl alkyl) benzimidazoles [32]. It was also employed for the carbonylation-peroxidation of styrene derivatives [33], the alkylation of aldehydes or ketones [34], the S-alkylation of 4-mercapto-6-methyl-2-pyrone [35], the N-alkylation of acridones [36], the sulfonylation of para-quinone methides [37], Suzuki cross-coupling reaction [38], Heck reaction [39], and Suzuki–Miyaura reaction [40].

2. Applications of TBAB for the Synthesis of Bioactive N-Heterocycles

1,4-Dihydropyridine and related derivatives are found to possess a wide range of biological efficacies, including anti-bacterial [41], anti-diabetic [42], anti-cancer [43], anti-HIV [44], anti-convulsant [45], and anti-tubercular [46] activities. A number of methods were reported for the synthesis of these biologically significant scaffolds using various homogeneous as well as heterogeneous catalysts [47][48][49][50], ionic liquids [51], and fluorinated solvents [52]. The use of metal-containing catalysts and toxic solvents are some of the major drawbacks of these reported protocols. In 2014, Kumar et al. [53] developed a facile method for the synthesis of a series of 1,4-dihydropyridine derivatives via one-pot pseudo four-component Hantzsch reaction between one equivalent of various aryl or heteroaryl aldehydes (1), two equivalents of ethyl acetoacetate (2), and one equivalent of ammonium acetate (3) using 10 mol% of TBAB as an efficient phase-transfer catalyst in aqueous medium at 60 °C (Scheme 1). Structurally diverse aromatic aldehydes produced the desired products with excellent yields. Heteroaryl aldehydes also smoothly underwent the reaction and yielded the desired products. Under the same optimized condition, the reactions afforded comparable yields by using benzyltriethyl ammonium chloride as catalyst whereas lower yields were obtained with cetyltrimethylammonium bromide as catalyst.

Scheme 1. TBAB-catalyzed synthesis of 1,4-dihydropyridines in water at 60 °C.

Liu et al. [54] reported a facile and eco-friendly method for the efficient synthesis of 2-substituted imidazolines (6) starting from aromatic aldehydes (1) and ethylenediamine (5) in the presence of a catalytic amount of both tungstophosphoric acid as well as tetrabutylammonium bromide as an efficient phase-transfer catalytic system using hydrogen peroxide as oxidant in water at 80 °C (Scheme 2). During optimization, a lower yield was recorded in the absence of TBABI (i.e., using only tungstophosphoric acid as catalyst). A probable role of the dual catalysts is shown in Scheme 3. In the organic phase, the rapid condensation of benzaldehyde and ethylenediamine produced intermediate I-1, which after cyclization produced the second intermediate I-2. In the aqueous phase, the combination of a catalytic amount of TBAB and tungstophosphoric acid generated a novel complex C-1 which in the presence of H2O2 yielded peroxo complex C-2. This in-situ generated complex can catalyze the formation of the desired 2-phenylimidazoline 5 from the intermediate I-2 by entering the organic phase. 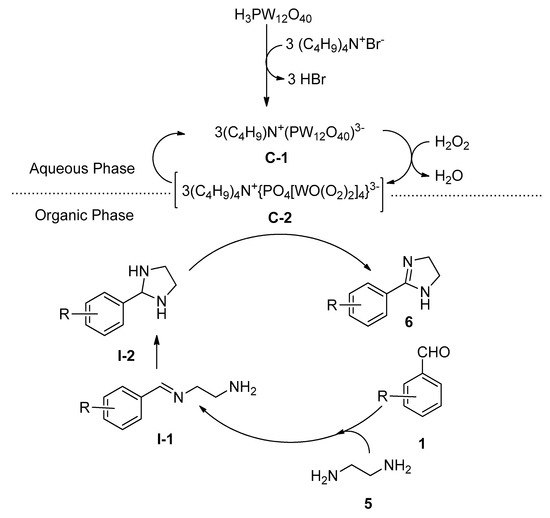 Scheme 3. Plausible role of tungstophosphoric acid and TBAB as an efficient combined phase-transfer catalytic system for the synthesis of 2-substituted imidazolines in water.

2,4,5-Trisubstituted imidazoles have been found to possess immense biological activities [55][56][57][58][59]. 2,4,5-Triphenyl imidazole (8) was first synthesized in 1882 from the reaction of aryl aldehyde (1) and benzyl (7) in alcoholic ammonia solution [60]. Later on, a number of methods were reported involving ammonium acetate (3) as the source of ammonia in the presence of various Lewis acidic metal salts as catalyst [61][62][63][64][65][66][67]. These reported methods suffered from many drawbacks, such as harsh conditions, use of metal-containing catalysts, and lower yields. Starting from the same batch of reactants, in 2008, Chary et al. [68] developed a facile, efficient, and environmentally benign protocol for the synthesis of 2,4,5-triaryl imidazoles (8) using a catalytic amount of TBAB isopropanol under reflux conditions (Scheme 4). After completion of the reaction, TBAB-containing reaction medium was reused for a further run. Aldehydes with both electron-donating as well as electron-withdrawing substituents afforded the desired products with excellent yields. All the reactions were completed within thirty minutes. A probable mechanistic approach is outlined in Scheme 5. TBAB activated the carbonyl group of benzil, which facilitated the formation of intermediate I-3 by the attack of ammonium generated from ammonium acetate. On the other hand, corresponding Schiff bases (I-4) were also prepared from the reaction between aromatic aldehydes and in-situ-generated ammonia in the presence of TBAB as catalyst. Now, the combination of I-3 and I-4 produced another intermediate I-5 which on further dehydration followed by aromatization yielded the desired 2,4,5-triaryl imidazoles (8).

Scheme 4. TBAB-catalyzed synthesis of 2,4,5-triaryl imidazoles in isopropanol at 82 °C.

3. Applications of TBAB for the Synthesis of Bioactive O-Heterocycles

Synthesis of 3-nitro-2H-chromenes (29) was achieved via the microwave-assisted reactions of substituted salicylaldehydes (27) and 2-nitro ethanol (28) using anhydrous potassium carbonate as base in the presence of a catalytic amount of TBAB as catalyst under solvent-free conditions (Scheme 13) [69]. The presence of a base facilitated the formation of carbanion on the carbon atom attached with a nitro group. After being activated by TBAB, the aldehydic group underwent condensation with the in-situ-generated carbanion and the resulting intermediate after cyclization yielded the corresponding desired products 29.

3,4-Dihydropyrano[c]chromenes and related derivatives have been found to possess a wide range of biological activities [70][71][72]. In 2009, Khurana and Kumar [73] reported a facile protocol for the synthesis of 3,4-dihydropyrano[c]chromenes (32) via one-pot three-component reactions of various aldehydes (1), malononitrile (30), and 4-hydroxycoumarin (31) in the presence of a catalytic amount of TBAB as an efficient catalyst in water at 100 °C (Scheme 14). The same batches of reactions also afforded excellent yields of the desired products under solvent-free conditions at 120 °C. Aldehydes (1) in the presence of TBAB underwent Knoevenagel condensation with malononitrile (30) and generated the corresponding intermediate I-7 which then further reacted with 4-hydroxycoumarin (31) to produce the desired product 32 (Scheme 15).

Scheme 14. TBAB-catalyzed synthesis of 3,4-dihydropyrano[c]chromenes in water or solvent-free conditions. 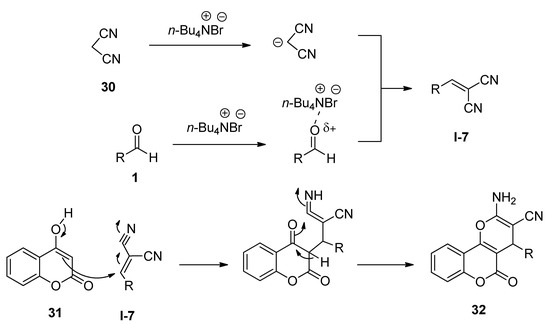 A combination of graphite carbon nitride and TBAB was used as an efficient catalytic system for the synthesis of 4-phenyl-1,3-dioxolan-2-one (34) from 2-phenyloxirane (33) under carbon-dioxide-filled reaction conditions at 105 °C (Scheme 16) [74]. Although the reaction took twenty hours to complete, it produced 100% yield of the desired product.

A facile and regioselective TBAB-catalyzed efficient protocol was reported for the synthesis of a series of isocoumarin-1-imines (36) through the 6-endo-dig oxy-cyclization 2-alkynylbenzamide (35) (Scheme 17) [75]. The reactions were carried out using two equivalents of Oxone as oxidizing agent in the presence of potassium carbonate as base in THF-water mixture as solvent at 80 °C. The plausible mechanism of the transformation is shown in Scheme 18. Under the same optimized conditions, when N-phenyl 2-trimethylsilylethynylbenzamides (37) were used as starting components, the corresponding isobenzofuran-1-imines (38) were isolated with excellent yields (Scheme 19). The probable mechanistic approach of this transformation is shown in Scheme 20. 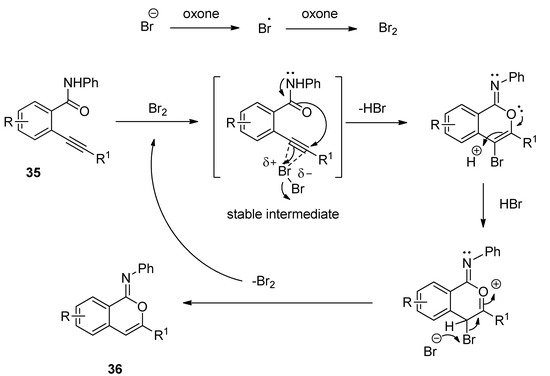 4. Applications of TBAB for the Synthesis of Bioactive N- as well as O-Heterocycles

Tjosaas et al. [76] designed a microwave-assisted TBAB-catalyzed facile protocol for the efficient synthesis of oxazolopyridine 2-tert-butyl-oxazolo[4,5-c]pyridine (48) via the cyclization of 4-bromo-3-pivaloylaminopyridine (47) in the presence of cesium carbonate as base. The reaction was completed within just ten minutes and afforded 78% yield (Scheme 27). 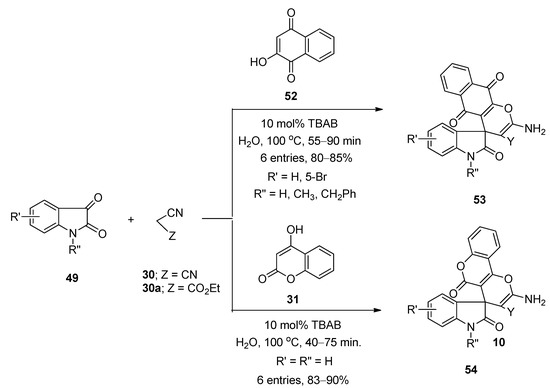 A simple, facile, and efficient method was designed for the synthesis of 1-trifluoromethyl-3-alkylidene-1,3-dihydrofuro[3,4-b]quinolines (57) via nucleophilic addition followed by cyclization reactions of o-arylalkynylquinoline aldehydes (55) with trimethyl trifluoromethyl silane (56) using TBAB as catalyst and cesium fluoride as base in toluene at 0 °C to ambient temperature (Scheme 30) [78]. All the products were obtained in excellent yields.

5. Applications of TBAB for the Synthesis of Bioactive N- as well as S-Heterocycles

TBAB was found to be an efficient catalyst for the synthesis of thiazine derivatives. In 2018, Bankar and Dhankar [79] reported a facile and environmentally benign approach for the synthesis of 5-(2-amino-6-aryl-5,6-dihydro-4H-1,3-thiazine-4-yl)-3,4-dihydropyrimidine-2(1H)-one derivatives (59) from the reactions of 5-cinnamoyl-6-methyl-4-phenyl-3,4-dihydropyrimidin-2(1H)-ones (58) and excess thiourea (9a) in the presence of a catalytic amount of TBAB as catalyst in dichloromethane-water as biphasic solvent at 50 °C (Scheme 31). All the reactions were completed within just thirty minutes and afforded excellent yields. In the presence of TBAB, the ketonic carbon of 58 activated and formed the corresponding Schiff bases (I-9) with the reaction of thiourea (9a). The in-situ-generated I-9 afforded the desired product by following the cyclization pathway shown in Scheme 32.