Carboxylic acids dissociate in water to carboxylates (R-COO-) and oxonium (H+[H2O]n) ions. The Proton Transport Chain (PTC) hypothesis asserts that enzyme complexes bridge nascent acids and ensure water-free transfer of the intermediate substrate. The PTC hypothesis entails that the concentration of the transferred acid is mathematically infinite and an infinite concentration drives enzymatic reactions unidirectionally. In support of this, a number of enzymes, such as proton-linked monocarboxylate transporters (MCTs), lactate dehydrogenases (LDHs) or sodium/hydrogen exchangers have been experimentally determined to catalyse unidirectionally. In addition, enzyme complexes, such as the pyruvate dehydrogenase complex (PDHc), are also known to catalyse unidirectionally. Scientific concepts, such as the original Citric Acid Cycle proposed that acids are metabolized in a clockwise direction. The PTC hypothesis provides mechanisms, mathematics and law of nature for biological processes.

Protons (H+) are completely removed from didactic biochemistry. A century ago, O. F. Meyerhof set glycolysis as the degradation of glucose (C6H12O6) to two molecules lactic acid (2x C3H6O3)[1]. Today, the stoichiometry in the metabolism of one molecule of glucose to two molecules of lactic acid (lacH) has vanished from common understanding. In 1953, H. A. Krebs was honoured with the Noble Prize for the discovery of the Citric Acid Cycle. Krebs presented lacH as substrate of a cycle unidirectionally cycling carboxylic acids[2]. Today, the carboxylate pyruvate (pyr-) is considered as the substrate of a “Krebs citrate cycle”. The change from Meyerhof’s and Krebs’ scientifically based concepts to an alchemistic model of glucose metabolism started soon after their discoveries. In 1949 Kennedy and Lehninger investigated mitochondrial function on isolated mitochondria[3]. They used the term carboxylates and determined carboxylates such as, pyr-, malate, a-ketoglutarate and citrate. They discussed their data on basis of Krebs’ Citric Acid Cycle, but phrases such as: “…oxidation of pyruvate and other intermediates of the Krebs cycle.” and “…aerobic citrate formation from pyruvate when malate served as a source of oxaloacetate.” misquoted Krebs’ acid cycle. But, to say misquote is incorrect, because Kennedy and Lehninger failed to cite one Krebs’ manuscripts. Yet somehow, Lehningers’ models of ‘citrate cycles’ and ‘glycolysis’ have conquered the world.

During formulation of the PTC hypothesis, the knowledge of glucose metabolism was reset to the original work[4].

PTCs have been investigated for decades. Unfortunately, by not adding H+ into the chemical formula and giving enzymes incorrect names, such as pyruvate dehydrogenase or pyruvate carboxylase, the concept of PTCs was largely hidden from the mainstream.

Pyruvate dehydrogenase complex (PDHc): PDHc together with a-ketoglutarate dehydrogenase belongs to the family of a-ketoacid dehydrogenases[5]. Pyruvic acid (pyrH) is the substrate of PDHc and proton-linked MCT1 is one transporter catalysing the transfer of pyr- and H+, pyrH to PDHc. The functional proton-linked MCT1•heart LDH (LDH-h) complex is located at the inner mitochondrial membrane[6]. The kinetics and reaction catalysed the proton-linked MCT has been investigated and published many times[7]. Similarly, PDHc catalyses a well-known chemical reaction[8]. In form of an acid, the a-keto group of pyrH is partially positively charged allowing a nucleophile substitution. The net reaction and mechanism of the unidirectional acting PDHc is depicted in Figure 1. 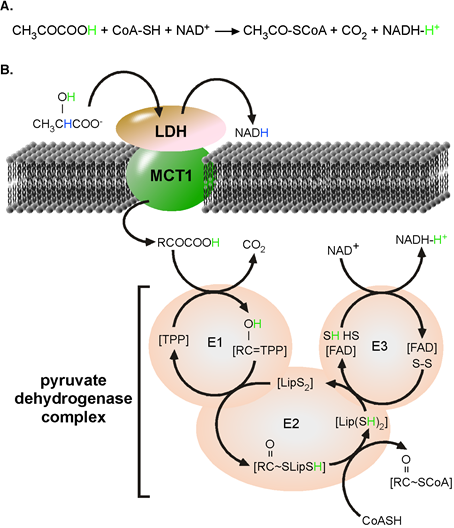 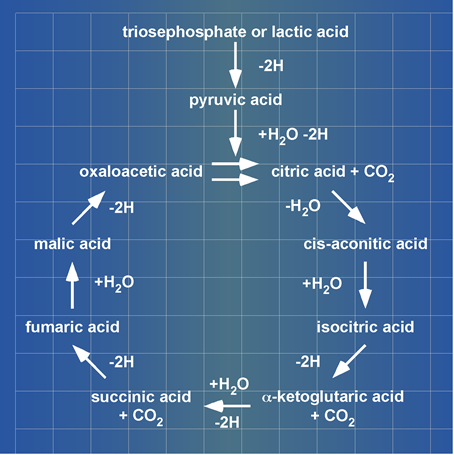 Figure 2. A blueprint of Krebs’ Citric Acid Cycle. Krebs presented this cycle of carboxylic acids at his Noble Prize lecture in 1953. ©The Nobel Foundation[2].

Proton-linked MCT1•carbonic anhydrase II (CAII) enzyme complex: Proton-linked MCT1 has been characterized as a unidirectional importer of monocarboxylic acids and the PTC hypothesis provides the mechanism and rationale for this unidirectional transport[9]. The proton-linked MCT1•CAII complex functionally links the energy of permanently emitted carbonic acid (H2CO3) (the end product of oxidative phosphorylation) with the import of the substrate of oxidative phosphorylation, lacH[4]. Thus, the complex acts as a carboxylic acid/carbonic acid antiporter.

Proton-linked MCT4•phosphoglycerate kinase complex: Proton-linked MCT4 is also a unidirectional transporter, but acts as an exporter of monocarboxylic acids[10]. Similarly, here, the transfer of the energy entity H+, initiates the monocarboxylic acid transfer. As yet the definitive proton-donor enzyme producing the acid is unknown. However, the proton-donor enzyme must be located at the plasma membrane for direct (water-free) H+-transfer. An increase in the rate of glycolysis (metabolism of glucose to two molecules of lacH) is linked with an increased export of lacH, indicating that at least one product of the glycolytic enzymes has to be an acid. The development of the PTC hypothesis provoked reconsideration of not only the well-established chemical formula of glycolytic enzymes, but also the subcellular location of glycolytic enzymes. Intriguingly, phosphoglycerate kinase (PGK) can be located at the plasma membrane and the product of the PGK catalysed reaction is 3-phosphoglyceric acid[4]. Thus, a proton-linked MCT4•PGK complex was postulated to link the unidirectional export of monocarboxylic acids with the rate of glycolysis rate.

The PTC hypothesis questions and replaces most of what is considered to be well established in biochemistry:

Laws of nature: Maximal entropy, or random distribution and movement of enzymes, substrates and products are the premise to apply the mathematics of enzyme kinetics[12]. The PTC hypothesis is based on the diametrical opposite of maximal entropy; ideal organized systems. The PTC hypothesis inspired the transfer of the 4th law of thermodynamics from physics to biological processes[13]. The 4th law asserts that the flow of energy and material is sufficient to form ordered structures[14]. Whereas maximal entropy ignores ordered structures such as enzyme complexes, metabolons, organelles, membranes, cells, organism, biology in general; the 4th law incorporates these and provides a path to self-organization.

Definitions of glucose metabolism: Glycolysis was defined as cytosolic process, starting with hexokinase II as first enzyme and pyr- as final product. This definition was replaced by considering glycolysis as a flow of energy and material (mol/s). Glucose transporters (GLUTs) are set as first enzymes and proton-linked MCT4•PGK as final enzyme complex. The definition that glucose metabolism provides metabolites to be “burned” and used as building blocks was expanded by setting glucose metabolism as the operating system of the cell and ‘major in command’. Metabolites are not simply intermediates but are defined as signalling molecules. Glucose and its metabolites not only promote the release of insulin, but also the release of a variety of cytokines, interleukins and growth factors[15]. Thus, hormones and transmitters are set as ‘second in command’. Unidirectionally importing or exporting proton-linked MCT complexes are classified as metabolic receiver- or sender-complexes, respectively[16]. Glycogen stores are considered not only as stores of energy, but also as stores of metabolic signalling molecules.

4. History of Deleting Protons in Biochemistry

As mentioned above misquoting pioneering work on glucose metabolism and consequently refusing to integrate scientific progress in a didactic model of glucose metabolism has a long history. The huge variety of ‘Krebs’ Citrate Cycles’ propagated in textbooks and learned by rota have nothing in common with Krebs’ scientifically based concept of a Citric Acid Cycle. The high similarity between Kennedy and Lehninger’s changes of Krebs’ work and the actually propagated models of “Krebs’ citrate cycles” strongly suggests that Krebs’ work belongs to the most often quoted, but never read and never referred to publications in history[3]. The 70-year-old original Citric Acid Cycle merged the PDHc-catalysed formation of acetyl-SCoA and the citrate synthase-catalysed reaction into one step. Krebs formulated the reaction as follows (see Figure 2): pyruvic acid + oxaloacetic acid + water ® citric acid + 2H + CO2. A. Lehninger’s textbook Biochemistry also mentioned this point, but detailing the reaction as: pyruvate + oxaloacetate ® citrate + CO2. [12].

It must be mentioned, that both Krebs and Meyerhof experimentally determined carboxylates and both knew that acids dissociate in water and enzymes act reversibly, but interestingly both created concepts with carboxylic acids and unidirectionally acting enzymes. The key to their scientifically based concepts, which is different to the experimentally gained data, is applying scientific rules, such as the principle of mass conservation or stoichiometry.

Actually, every single chemical reaction published by H. A. Krebs is incorrectly transferred when a ‘Krebs’ citrate cycle’ is introduced. Krebs aimed to investigate and understand the scientific field of metabolism. All of Krebs’ work misunderstood by A. Lehninger is highlighted in Figure 3. The PTC hypothesis works with the original concept of the Citric Acid Cycle, a unidirectional cycle of carboxylic acids. The PTC hypothesis, by providing the missing rationale (enzyme complexes and water-free transfer), mathematics (infinite concentration) and the law of nature the PTC hypothesis gives Krebs’ Citric Acid Cycle a second chance. 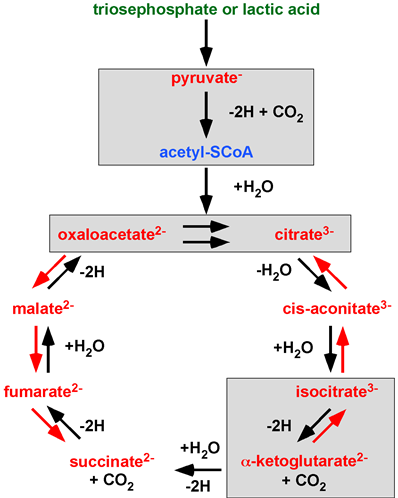 Lehninger has changed the work of O. F. Meyerhof and H. A. Krebs and the work of many more scientists into bio-alchemy. Kennedy and Lehninger wrote: “…it has been a general finding that the more highly organized enzyme systems of animal tissue responsible for oxidation of metabolites by molecular oxygen.”[3]. Thus, Lehninger published ‘the general finding of highly organized enzyme system’, but in his textbook Biochemistry, the diametral opposite is presented. The advantage of disorganization is propagated and stressed in the box “Entropy” [12]. The propagated mathematics/understanding of Lehninger’s citrate cycle, based on changes in concentration, allowed the mis-incorporation of reversibly acting enzymes. In 1951, D. E. Green summarized “…intermediates do not accumulate during the normal activity of the cyclophorase system… (Citric Acid Cycle)”[17].  In other words, 70 years ago, it was known that the amount of carboxylic acids in the Citric Acid Cycle complex is constant and that a mathematics based on equilibration reaction and changes in concentration is not fit for biological processes, such as the Citric Acid Cycle. On the basis of the PTC hypothesis, the redox-mechanism “metabolic traffic jam” was developed[18]. The metabolic traffic jam ‘pushes’ carboxylic acids out of the complex when a new carboxylic acid is actively transferred into the complex. By doing so, intermediates do not accumulate.

In order to regain stoichiometry in the well-established chemical formulae of glycolysis, it was postulated that 3-phosphoglyceric acid is the product of PGK. 70 years ago, the stoichiometry to metabolize glucose to two molecules lacH was known. Even Kennedy and Lehninger wrote: “Fluoride was added to inhibit enolase and the end-point measured manometrically indicated the formation of 3-phosphoglyceric acid, which causes CO2 liberation from bicarbonate”. Yet, in Lehninger’s textbook Biochemistry the product of the phosphoglycerate kinase (PGK) catalysed reaction was set 3-phosphoglycerate, a deliberate change from science to alchemy.

Maps of metabolic pathways are reminiscent of a railway map. Every molecule is connected to metabolic pathways. Point to one molecule on the map, and we know how the molecule is degraded and synthesized. Such maps give the impression that metabolism is well understood. For example, the effects of insulin on an organism and the signalling pathways of insulin have been investigated for a century; these are well understood. Insulin accelerates the processing of glucose to glucose-1 phosphate and lacH to store excess energy as glycogen and lipids, respectively.

Metabolic maps provide the destination and insulin is the ticket for this route. The PTC hypothesis introduced metabolic switches (enzyme complexes) setting the route and the energy (H+), driving material in one direction.

Malfunctioning switch-stands are linked to obesity, heart failure, major depression, chronic inflammation and many more conditions. Genetic variation and/or environmental predisposition are linked to the inaccurate building of the metabolic flow of energy and material between cells. Briefly, the PTC hypothesis provides mechanisms, mathematics and law of nature for biological processes.