The totality of normal cells, blood vessels and molecules embedding the tumor cells and sustaining their growth, characterized by a continuous bidirectional reshaping.

Uncontrolled proliferation, cell death resistance, replicative immortality, growth suppressor, evasion, angiogenesis induction, invasion and metastasis activation are all considered hallmarks of cancer[1]. Eleven years after the first edition of The Hallmarks of Cancer, metabolic energy reprogramming and immune escape avoidance mechanism have been highlighted and added as the emerging new hallmarks of cancer together with tumor-promoting inflammation, genome instability and mutations[2]. This underlines how our current understanding of cancer biology has shifted from a “cancer cell centric” perspective to a more inclusive concept which places cancer cells in a complex and interconnected network composed by the extracellular matrix (ECM), immune and stromal cells to which we generally refer as tumor microenvironment (TME)[3]. TME can collaborate with cancer cells, thus promoting tumor progression and metastatization as well as resistance to therapy[4]. 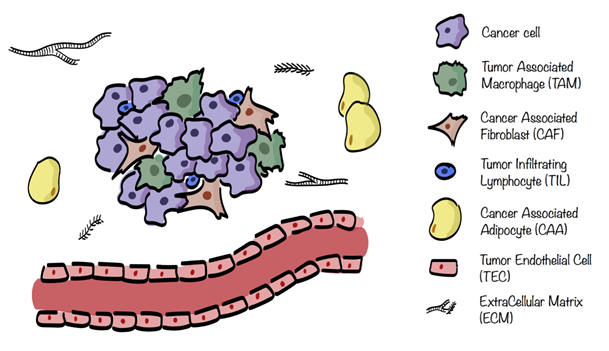 Cancer progression is sustained by the contribution of several non-malignant cells that are shaped and, which, in turn, influence cancer cell behavior and TME metabolic landscape[2][6]. For example, following the interaction with CAFs, cancer cells improve their invasiveness, their ability to intra- or extravasate as well as their stemness potential. All these processes create a stiff fibrotic matrix where the development of blood vessels is impaired, leading to inefficient delivery of nutrients and clearance of waste products of cellular metabolism, together with the formation of hypoxic areas[7]. This hypoxic response causes an enhanced glycolytic activity in the tumor cells with an increased lactate deposition. Cancer cells crosstalk metabolically with stromal cells within the TME and, in 2009, a metabolic coupling between CAFs and surrounding cancer cells was proposed and named “reverse Warburg effect”. While in the classical Warburg effect cancer cells display aerobic glycolysis in order to sustain their proliferation, in the “reverse Warburg effect” the cells of the TME are highly glycolytic whereas cancer cells are not. More in detail, cancer cells induce aerobic glycolysis in surrounding CAFs which start to release pyruvate and lactate used directly by cancer cells to fuel their TriCarboxylic Acid (TCA) cycle and OXPHOS[8]. This reprogramming is due to an increased expression of GLUT-1 and monocarboxylate transporter-4 (MCT-4) involved in glucose uptake and lactate release, respectively[9]. The increased release of lactate in the microenvironment contributes to its acidification, which, in turn, leads to activation of the matrix metalloprotease-9 (MMP-9) and of the epithelial-to-mesenchymal transition (EMT) program, promoting tumor progression[10][11]. However, the ‘reverse Warburg effect’ model does not apply to all CAF-cancer cell interactions. In fact, pancreatic and ovarian CAFs consume lactate and display low glycolytic activity[12][13]. Moreover, cancer associated stromal cells also reshape their metabolic landscape forcing the production of ketone bodies and glutamine and activating the mitophagy[14]. All these molecules could be exploited through OXPHOS, thus reprogramming cancer cells towards a respiratory metabolism. Furthermore, the production of pro-inflammatory cytokines by stromal cells can push cancer cells towards an OXPHOS phenotype. The key regulator of the pro-inflammatory stimuli is the NF-kB transcription factor, involved in the control of energy balance and metabolic adaptation to glucose starvation, by upregulating mitochondrial function[15]. Acidosis of interstitial space develops as an intrinsic consequence of the Warburg effect. Indeed, in normal conditions, the extracellular pH is around 7.4 and its levels decrease to a range of 6.7–7.1 in cancer[16]. The highly glycolytic activity of tumor cells results in both lowering of intracellular pH and lactate accumulation, which, in turn, leads to the inhibition of glycolysis itself. In order to avoid such inhibition, cancer cells upregulate MCTs and Na+H+ exchangers (NHE) or H+ ATPase pumps, devoted to lactate and protons export, respectively[17]. Moreover, the acidification of the TME reduces the response of the immune system against the tumor[18][19] and it is detrimental for drug delivery and efficacy[20][21]. This happens because at least one pH-titratable group is present in common drugs which are usually weak bases. As a result, at lower pH, drugs can be protonated, thus affecting their possibility to permeate through the cell membrane[16]. For all these reasons, acidic TME targeting started to be considered for tumor therapy. In this line, small-molecule inhibitors, nanotheranostic systems responsive to pH to deliver chemotherapeutic drugs specifically to acidic microenvironment and pH-sensitive biomaterials were developed[22][23][24]. An example is represented by mesoporous organosilica particles (MONs) able to deliver doxorubicin to low pH compartments[23]. In parallel, acidosis can mediate also the ‘immune escape’. It was demonstrated that T cells exposed to acidic environment show an increased threshold of activation and an enhanced expression of negative regulatory signals, namely CTLA4 and IFNɣR2[25].

ICs display a strong interplay between immune response and metabolism. Following activation, immune cells start to proliferate and to produce effector molecules such as cytokines and cytotoxic granules. In order to fuel the higher biomass and the increased energy demands, activated immune cells rewire—and reprogram their metabolic pathways[26]. Interestingly, several studies have shown that limiting levels of glucose impair T cell effector activity which relies on glycolysis and, therefore, on glucose availability[27][28]. Even if the pivotal function of cell metabolism is to provide energy and substrates, it is important to underline that it also plays an essential role in instructing the phenotype and the differentiation of ICs influencing cancer outcome and therapy resistance[5][26]. Therefore, a good understanding of the metabolic processes of ICs and how they are regulated is essential to harness anti-immunity response and improve cancer survival. Besides glucose, also fatty acids and amino acids, such as glutamine, are importantly involved in immune cell fate and response[29][30].

Overall, the metabolic reprogramming of TME is strongly affected by hypoxia, which leads to an impairment of OXPHOS, an enhancement of glycolytic activity and production of mitochondrial reactive oxygen species (ROS). In particular, oxygen deprivation pushes cancer cells towards a more glycolytic phenotype in a hypoxia-inducible factor-1α (HIF-1α)-dependent manner. In turn, HIF-1α activity relies on redox, oxygen levels, PI3K/mTOR/Akt, and c-MYC-related pathways involved in tumor cell metabolism, growth and survival[9][31][32][33]. HIF-1α, in fact, induces the expression of pyruvate dehydrogenase Kinase 1 (PDK1), leading to decreased activity of the pyruvate dehydrogenase complex (PDC) with a consequent reduction of oxygen consumption and enhanced glycolysis[34][35]. Moreover, HIF-1α increases glucose uptake and causes a more efficient glycolytic breakdown due to the induction of GLUT-1[36] and GLUT-3 expression[37]. The metabolic crosstalk among tumor and stromal cells is finely regulated and extracellular vesicles (EVs) are key messengers in this communication. The analysis of EVs involved in metabolic rewiring revealed the presence of proteins, lipids, different RNA species and metabolites. Among the various RNAs present in EVs, miRs exert a central role in the metabolic crosstalk by directly suppressing metabolic enzymes or transporters as well as by controlling important regulators of metabolic processes such as HIF-1α, PI3K/mTOR/Akt, and MYC pathways. In fact, miRs are recently emerging as regulators of the metabolic reprogramming in ICs and CAFs[38][39].