The ElectroKinetic Remediation Technology (EKRT) is an electrochemical approach that is applied for the remediation of contaminated soils. Electrochemical approaches have gained prominence thanks to the many possible applications and their proven effectiveness. This is particularly evident in the case of inorganic/ionic contaminants, which are not subject to natural attenuation (biological degradation) and are difficult to treat adequately with conventional methods.

The EKRT approach consists in the application of an electric potential gradient to induce a low electric current across a portion of the contaminated soil to be treated, using electrodes suitably positioned in the subsurface [1]. It can be applied both in situ and ex situ and allows high efficiency even if performed in soils with low permeability [2][3], as the applied electric field can easily reach contaminants embedded deep in the subsurface, which other technologies are unable to reach [4][5].

Depending on the intensity of the resulting electric current and the characteristics of the system (salt content, moisture, soil composition, etc.), different physical, chemical and electrochemical processes are induced. These may allow a substantial migration of species through the soil and towards the electrode wells (housing for the electrodes and the electrolyte solution) from where they can eventually be removed [6] by electrodeposition, adsorption, precipitation, or co-precipitation on the electrodes [7], or simply by removing the contaminated electrolyte solution (which can then be treated and reused [8]).

The most relevant phenomena induced in a soil by the applied electric field are listed below[9] and graphically illustrated in Figure 1: 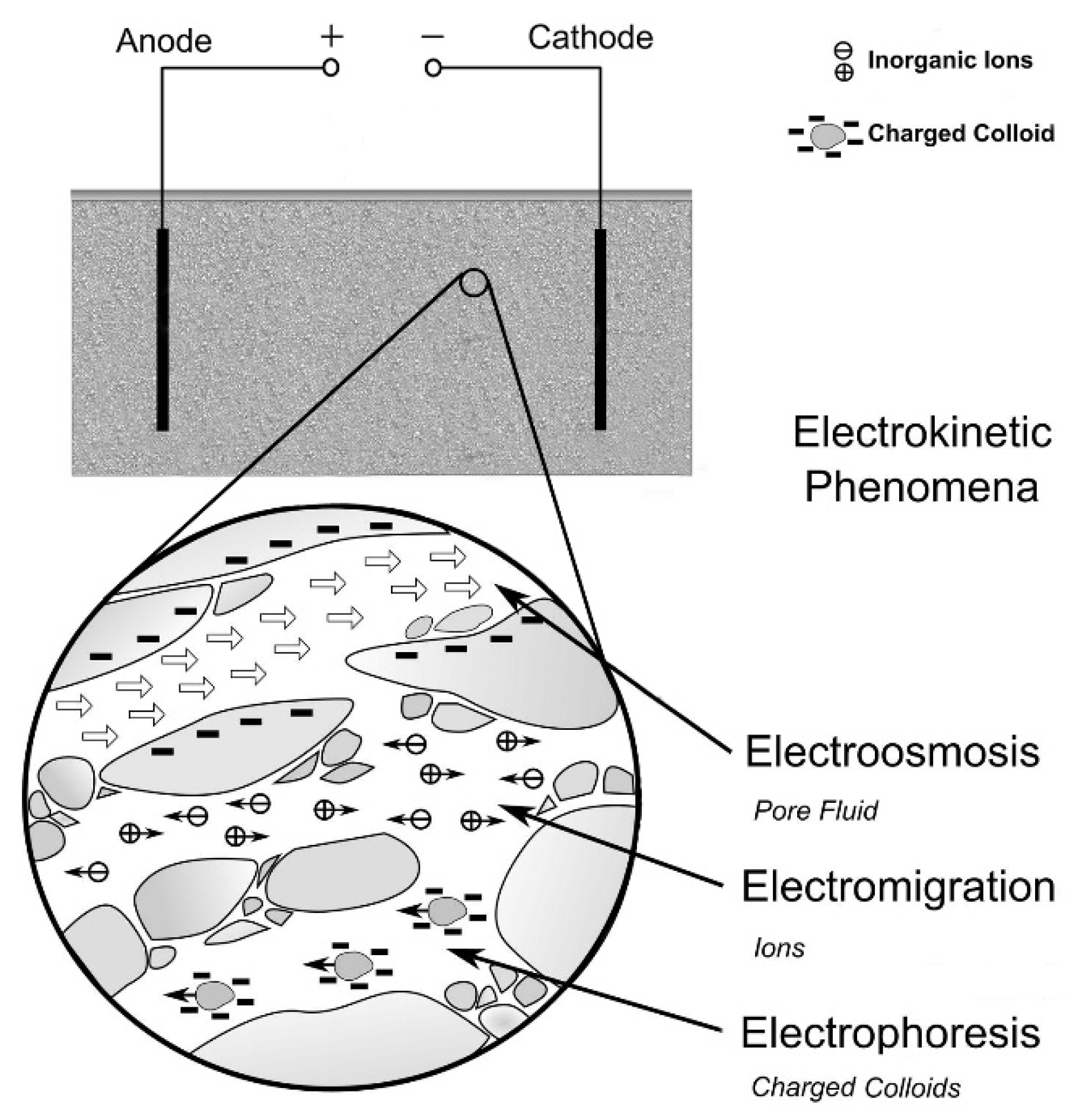 Figure 1. Detail of the main mechanisms occurring during an ElectroKinetic Remediation Technology (EKRT) remediation. Adapted from [10].

Moreover, since soils are usually characterized by a high ionic resistance, an increase in temperature is normally observed (Joule–Thompson effect) [11]; the dissipated energy is proportional to the square of the current flowing through the soil. It is worth noting that, in the presence of volatile pollutants, this can cause significant environmental problems.

Under the action of the electric field generated between electrodes, anions and cations move toward the anodes and the cathodes, respectively (electromigration). In addition, the anodic oxidation of water generates an acidic front, while the reduction of water at the cathodes produces an alkaline front. The H+ and OH− species thus formed not only contribute to electromigration but can also allow changes in soil pH with possible repercussions on soil chemistry. Among the resulting chemical reactions, the dissolution or precipitation of salts and minerals can either facilitate or hinder the release of pollutants fixed in the soil [12].

2. Evolution of the Technology and Its Applications

Although the first investigations on electroosmotic flow date back to the beginning of the 19th century [1][13], the electrokinetic approach was applied only several decades later, initially as a consolidation process for fine soils [14] and subsequently for the recovery of heavy metals [15][16].

In the first investigations [2][9], the removal of contaminants was attempted simply by inducing an electric current through electrodes inserted directly into the contaminated soil, but the efficiency of the remediation was low. Numerous improvements have therefore been proposed, including:

Since electromigration generally provides a greater impact than electroosmosis, for many years EK remediation has mainly focused on charged species such as heavy metals [24][25][26]. More recently, research has focused on the use of EKR technology for the removal of dangerous organic substances from soil [27] or from marine and river sediments [28]. A plethora of technologies have been reported, ranging from simple electrokinetic soil flushing for soils with low hydraulic conductivity, to the use of permeable reactive barriers loaded with granular activated carbon (GAC) [29], zero-valent iron (ZVI) [30][31][32], or even microorganisms [33] used to retain or transform the organic species mobilized by the applied electric fields.[3][4][5][6][7][8][10][11][18][19]

The main challenge of EK technology is the conversion of low solubility pollutants into mobile forms in order to extract them. Therefore, enhancing agents, added to the process fluids, are necessary to obtain an effective removal of all type of contaminants. During an electrokinetic soil flushing, surfactants are normally introduced into the process fluid to allow the formation of micelles (charged particles) with the species target of the remediation. These micelles are then transported across the soil under the effect of the electric field applied to promote the removal of organic and inorganic compounds [2][7], causing electrophoresis to significantly contribute to the remediation process of relatively permeable soils.

The ever-increasing attention to environmental sustainability is now catalyzing the interest in new (bio)remediation technologies, which involves a minimum use of chemicals (and external energy) and consequently implies a lower environmental impact [34]. In this context, electro-bioremediation technologies have recently been investigated, especially following the discovery that many microorganisms are capable of degrading environmental contaminants, including polycyclic aromatic hydrocarbons (PAHs), using electrodes as electron acceptors [35][36][37].

Furthermore, bioelectrochemical systems allow manipulating the redox potential of the contaminated matrix, thus establishing in situ conditions that favor the biodegradation of contaminants [38][39].

On the other hand, the coupling of the electrokinetic approach with bio-remediation and phyto-remediation could represent a more sustainable approach. Their energy requirement is low, the addition of chemicals is often not necessary, and the physicochemical and ‘biological’ (e.g., the fertility) characteristics of the soil at the end of the treatment are improved compared to the initial situation. EK treatment can increase the bioavailability of organic pollutants by facilitating contact between microbes and nutrients and/or pollutants, and the weak electric current may also directly stimulate microbial activity [40][41] or degrade some of the pollutants through an electrolytic reaction [42]. In addition, the application of an EK treatment can improve the growth and respiration of plants (which in turn can facilitate the removal of metals) and facilitate the spread of microorganisms of the rhizosphere (with possible enhancement of the biodegradation of organic contaminants) [43]. Other authors instead argue that the benefits are linked to the influence of the electric field on enzymatic reactions, water activity, and membrane transport [44].

It has been reported that the elimination of organic and/or inorganic contaminants through the combined use of plants and an electric field applied through the soil to be treated is an effective approach [45], able to control the transport of contaminants in the rhizosphere, as well as to prevent the establishment of strong acid or alkaline fronts in the soil [46]. However, suitable operating conditions must be selected to ensure the survival and development of microorganisms and/or plants [47]. Extreme pH values and high temperatures can be produced during the process, which are two of the most critical parameters for keeping microorganisms active [10][48]. Since most processes induced by the electric field have a negative effect on the viability of microorganisms, the simultaneous optimization of both electrokinetic and biological processes can be very challenging [39]. The application of an electric field can also cause negative effects to plants: for example, growth inhibition and death of plants located near the electrodes have been reported [49]. The negative effects of electricity would be linked to changes in soil pH associated with water electrolysis and phytotoxicity due to the increasing bioavailability of metals.

Another recently explored approach is the coupling of EKRT and nanotechnology. Nanomaterials and nanoparticles have peculiar properties which, if properly exploited, can allow first-rate performance while maintaining high sustainability [50][51].

It has been suggested to stabilize or improve the physical properties of a collapsible soil (e.g., loess) by employing the EK technique for the distribution of additives such as nano-silica or lime [52]. On the other hand, the approach can also be applied to achieve remediation goals; for example, the potential of a combined nZVI-EK bioremediation approach (nZVI stands for zero-valent nanoscale iron) to clean up highly polluted aquifers from chlorinated ethenes has been recently explored [53]. It was shown that EK improves the long-term reactivity of nZVI by also stimulating microbial degradation activity by increasing the groundwater temperature.