Anodic oxides is part of energy conversion and storage devices.

This entry presents studies that bring applied technological aspects that are being developed or are already in the implementation stage and does not present an in-depth discussion regarding anodic oxide materials’ synthetic methodology. The fabrication of anodic oxides from anodization of metallic substrates offers several advantages that can impact the technology economically in biological, environmental, and energy fields. The anodic oxidation is a facile, low-cost, and scalable method to obtain nanostructured porous oxide films with large surface areas by strict control of the morphological and structural properties, such as tube length, pore size, film thickness, and rigid adhesion to the substrate [1][2][3]. These features make the anodic films, such as the popular TiO2 nanotubes (TiO2-NT) and anodic aluminum oxide (AAO), attractive for the development of a wide range of technologies, including drug delivery systems [4], implants [5], sensors [6], filtration membranes [7], photocatalysts for pollutant degradation [8], energy conversion [9][10][11] and energy-storage systems [12][13], as illustrated in Scheme 1. 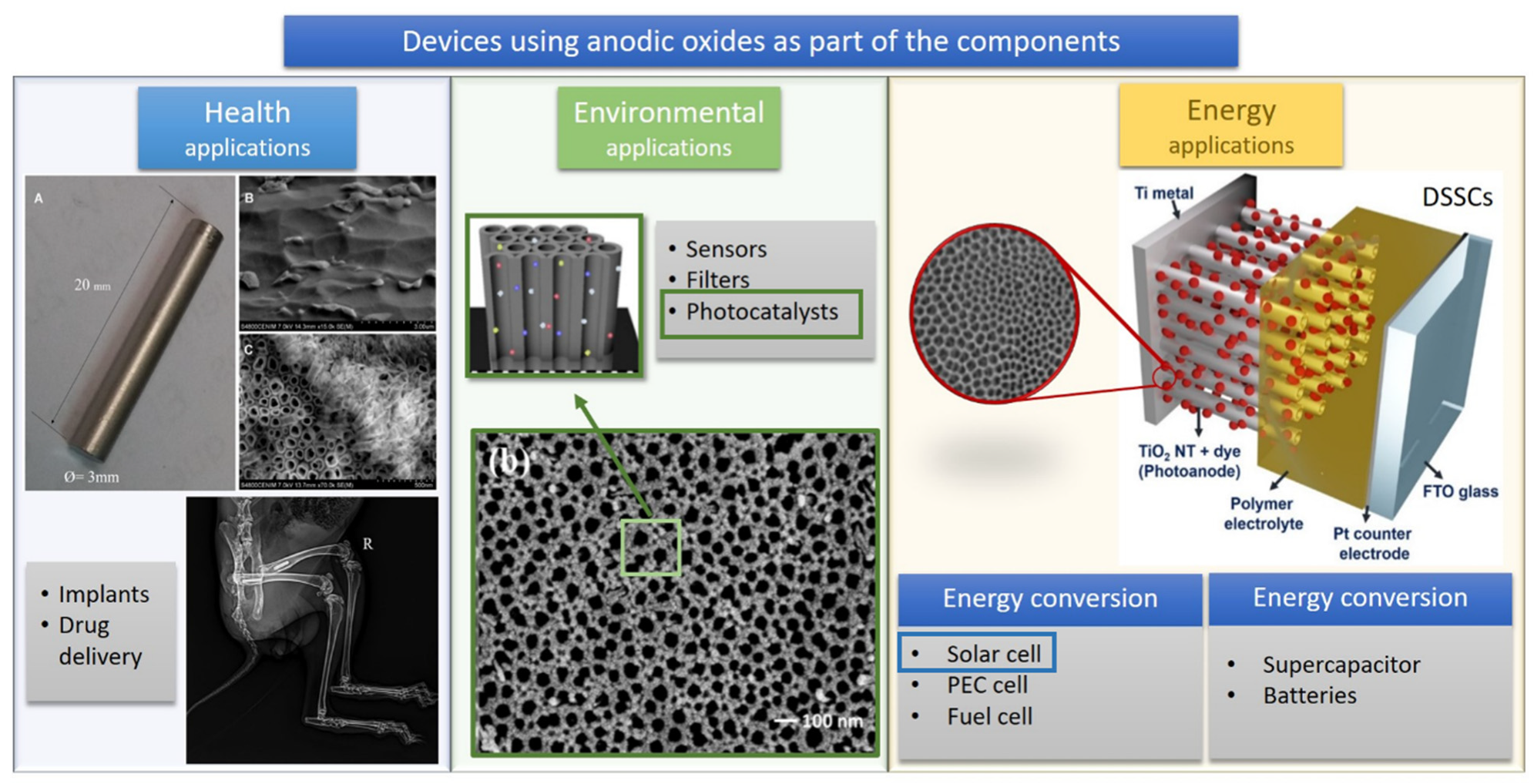 Scheme 1. Description of nanostructured anodic oxides in practical applications by the field. Figures used in this scheme were reprinted with permission from [14] and adapted from [15][16].

In the context of global sustainable strategies used to minimize the problems caused by industrialization and population growth, scientists have made significant efforts to develop advanced materials and systems based on clean processes that exploit renewable energy sources. In this sense, solar energy, a “green” resource, is essential as a substitute for conventional and non-renewable energy sources due to its abundance, availability, and direct harvest. The solar light can be directly converted into electric energy by photovoltaic (PV) devices such as solar cells. On the other hand, the photoelectrochemical (PEC) devices operate using solar energy or another light source to produce hydrogen gas from water molecules. Considered as a green fuel, hydrogen can be stored or converted into electric energy in fuel cells.

Therefore, PV, PEC, and hybrid PV–PEC systems are considered attractive technologies for sustainable production of electric energy and renewable fuel. One of the main challenges in this sector is to improve the efficiency and performance of these devices by the fabrication of stable photoelectrodes with high photoconversion rates. In general, TiO2-NT is the preferred anodic oxide explored in dye-sensitized solar cells and PEC water-splitting systems [10][17][18][19]. Due to its photocatalytic properties, chemical stability, and unidirectional orientation, this semiconductor is frequently used as the photoanode; exceptions include reports of WO3 [20][21] and Fe2O3 [22]. The use of copper oxides as photocathodes is emerging [23][24]. The utilization of AAO as a template or scaffold is also addressed [2][25][26].

Considering devices that operate essentially via electrochemical processes, the most promising sustainable systems are the fuel cell (for energy conversion) and the supercapacitors and rechargeable batteries (for energy storage). In these applications, TiO2-NT is also the widely explored anodic oxide, but in this case, the properties of interest are its chemical stability, low-cost, and high surface area, despite its low conductivity [27][28]. In fuel cells, this oxide is employed as support for the catalyst in both anodes [29] and cathodes [30] to increase the electrodes’ stability. In supercapacitors, the excellent adhesion between anodic oxide and metal is advantageous for the fabrication of electrodes without a binder agent, reducing the synthesis steps [31]. In rechargeable batteries, large surface areas with open frameworks for insertion of ions are the aim. Additionally, the low volume expansion during the Li+ insertion/extraction is an advantage that can increase the stability and safety of the Li-ion battery [32]. Besides TiO2, the interest in the properties of other nanostructured anodic films for energy storage systems, such as Cu(OH)2, NiO, WO3, SnO, and Ta2O5, has been increasing in the field.

Nanostructured anodic oxides are an excellent alternative for developing energy devices’ components due to a series of specific advantages present in each energy application. However, we can summarize the general advantages of their utilization as follows:

The synthetic routes employed to fabricate the anodic oxides generally involve the following steps: (i) pre-treatment of the substrate, (ii) anodization, (iii) heat treatment, and (iv) surface modification if necessary. This section depicts the common aspects of the syntheses of TiO2, Al2O3, WO3, Fe2O3, ZnO, CuxO, ZrO2, NiO, SnO, Nb2O5, and Ta2O5, which include the anodization procedure to grow the anodic oxides, followed by heat treatment procedure for oxide modification or crystallization.

The pre-treatment steps (cleaning, polishing, pre-annealing procedures) will not be described here because they can vary according to the metal and purpose. For this, we recommend consulting the original papers for details. Furthermore, since some functionalities were designed to attend to the specific properties of the device´s materials, the additional steps employed for surface modification of the oxide will be described in the following sections with each material’s application description.

The anodization consists of an oxidation process of a metallic substrate (Mo → Mz+ + ze−) working as the anode of an electrochemical reactor in a proper electrolyte. The resulting anodic oxide film grown over the metal substrate can form a rigid compact layer or a nanostructured layer. The former case refers to barrier-type oxide films [2]. The latter case involves the formation of nanostructured oxide films with different morphologies, such as nanopores, nanotubes, nanowires, nanorods, nanopetals, and other nanogeometries [1][2][3][33][34]. The type of oxide formed depends on the experimental conditions. The main parameters that must be considered to control the morphology and composition of the anodic film during the anodization step are:

The mechanisms of growth of anodic oxide nanostructures and the influences of anodizing conditions on the oxide film’s final properties are well-known in the scientific literature, with many papers devoted to these topics having been published in the last decades [1][2][3][35][36][37]. In general, to form a nanostructured morphology with a large surface area, the anodization must be performed in an electrolyte in which the formed oxide is partially soluble, for instance, oxalate media to produce nanoporous alumina [2][37] or fluoride ions to grown nanotubes of TiO2 or ZrO2 [1][38][39]. The pore or nanotube diameter can be controlled by the applied potential and temperature, whereas the oxide layer’s thickness can be tuned by the anodizing time [40][41]. The anodizing time can vary from a few minutes to several hours depending on the layer’s desired thickness, usually obtained in the micrometer range [2][41][42]. Polishing procedures and the use of high-purity substrates tend to increase the orderly arrangement of the nanostructure. The two-step anodization method can be applied to the production of highly ordered nanotube/nanopore arrays [2][3]. This procedure uses an initial anodization step, followed by removing the oxide layer and a subsequent second anodization step over the nanotextured substrate.

On the other hand, the oxide’s microstructure and degree of crystallization are controlled by post-treatments annealing procedures in air or under a suitable gas atmosphere. The composition of the oxide surface can be also be tuned in this step. The anodization of Cu in alkaline solutions, for instance, leads to the formation of copper hydroxides that can be converted into CuO or Cu2O species after an annealing step [34]. Kang et al. [43] utilized a CO atmosphere to convert anodized WO3 into WC for a cathode in PEC applications.

The usual procedure adopted to form the nanotube arrays of TiO2 for energy applications is the conventional potentiostatic anodization of high-purity Ti foils in organic media containing fluoride ions plus a small amount of water. NH4F and H2O dissolved in ethylene glycol (EG) have been the preferred formulae for electrolyte composition [44][45][46][47][48][49]. Other studies substituted EG with glycerol and HF by NaF [11][50]. Aqueous solutions, such as CH3COOH + HF [43] and H3PO4 + NH4F [51], were also reported. It is possible to obtain nanotube arrays with a diameter ranging from 40 to 160 nm while applying potentials in the 10–60 V range for anodization times varying from 20 min to 24 h [29][41][51][52]. The high surface area provided a larger number of active sites for the photo and electrochemical processes. In some cases, two-step anodization was carried out to obtain a high-ordered nanotube array [18][45][53]. The syntheses were usually performed at room temperature, but an exception includes the anodization performed at 55 °C for the fabrication of TiO2-NT bioanodes in microbial fuel cell devices [11][54].

In those applications requiring a transparent conductive substrate, like in solar cells, the TiO2-NT membrane was detached from the Ti metal after anodizing via ultrasonication and transferred to the fluorine-doped Tin Oxide (FTO) glass, using a TiO2 paste to binding the layers [18][45].

Figure 1 depicts a surface micrograph obtained by FESEM of a TiO2-NT sample prepared via anodization of Ti foil at 25 V for 90 min in ethylene glycol containing 10% wt. water and 0.75% wt. NH4F, after annealing at 450 °C for 2 h. The nanotubes exhibited a pore diameter in the 50–70 nm range with approximately 10 nm of wall thickness under this condition.