Grifola frondosa (G. frondosa) is a Basidiomycetes fungus that belongs to the family of Grifolaceae and the order of Polyporales.

In Japan Grifola frondosa (G. frondosa) edible fruiting body is known as maitake. In Japanese, mai means dance and take means mushroom. G. frondosa is known as “hui-shu-hua” (grey tree flower) in Chinese, possibly due to its appearance. G. frondosa grows around the stumps of broadleaf trees or trunks and is edible when young. The environment of the northeastern part of Japan is suitable for the growth of G. frondosa. The temperate forests in eastern North America, Europe and Asia are also ideal for its growth. Meanwhile, it is a common mushroom in the Unites States and Canada, known as sheep’s head, king of mushrooms, hen-of-the-woods, and cloud mushroom [1].

Japan was one of the countries that first started the artificial cultivation of G. frondosa in the mid-1980s. There are in general three methods for the artificial cultivation of the G. frondosa fruiting body, they are bottle culture, bag culture and outdoor bed culture. Bag culture is the most popular cultivation method in Japan [2] because of its advantages such as the low cost of plastic bags, small space requirements and easily-controlled indoor environment. Bag culture can achieve higher yields of mature G. frondosa mushrooms than bottle culture and requires a shorter cultivation time than outdoor bed cultures. As shown in Figure 1 [2], the major steps of bag cultivation include substrate preparation, substrate sterilization, mycelium inoculation and incubation. In addition to the fruiting body, there is also an increasing demand for G. frondosa’s mycelium and its bioactive metabolites. Solid-state fermentation (SSF) [3] and submerged fermentation [4] are two common methods of mycelium cultivation. A common substrate for SSF is sawdust supplemented with rice bran or wheat bran [5]. Submerged or liquid fermentation is usually more efficient, providing a higher mycelial productivity in a shorter time, requiring smaller plant space and allowing for more effective product quality control [6]. A typical submerged fermentation process is presented in Figure 2. 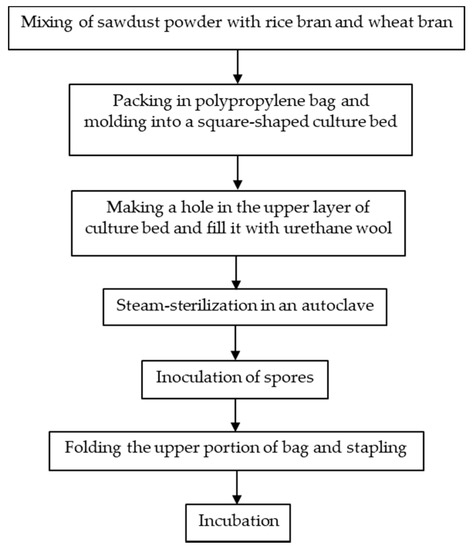 G. frondosa is edible and is regarded as a healthy food because it is a good source of protein, carbohydrates, dietary fiber [7][8][9][10][11][12][13], vitamin D2 (ergocalciferol) [13][14][15] and minerals (K, P, Na, Ca, Mg) [7][9][12][15][16], with low fat content and caloric value [15]. G. frondosa is delicious, with a sweet and umami taste, which is mainly attributed to its high trehalose, glutamic and aspartic amino acid and 5′-nucleotide content [10][11][13][17]. Due to its delicious and special taste, G. frondosa is not only used as a food ingredient, but also as a food-flavoring substance in dried powder form. Apart from its high nutraceutical value, G. fondosa is reported to possess a wide range of pharmacological effects. G. frondosa was first discovered to have antitumor activity in the 1980s from hot water extracts of the G. frondosa fruiting body [16][17]. The major bioactive components were found to be β-glucans [17][18][19][20]. The D-fraction, a β-glucan complex with about 30% protein, was first discovered by Nanba’s group in the late 1980s [21]. Since then, the D-fraction has been widely studied and gradually developed into commercially available complementary medicines and healthcare products. In addition to the D-fraction, there are many other bioactive polysaccharide fractions that are obtained from G. frondosa, such as the MD-fraction [22], X-fraction [23], Grifolan [24], MZ-fraction [25] and MT-α-glucan [26]. The different polysaccharide fractions isolated from G. frondosa possess various bioactive effects such as immunomodulation [24], antitumor [25], antivirus [27], antidiabetic [26] and anti-inflammation [28]. In recent years, an increasing number of studies have attributed or linked the health and therapeutic effects of G. frondosa polysaccharides to their capacity for modifying gut microbiota, microorganisms that play an important role in human health and diseases. In particular, gut microbiota play a role in maintaining immune homeostasis, which may have a connection to the antitumor effects of polysaccharides [29]. The regulation of gut microbiota composition by G. frondosa polysaccharides has also been suggested to contribute to the treatment of metabolic disorders such as non-alcoholic fatty liver disease (NAFLD) [30] and diabetes [31], indicating their potential for preventing or treating hyperglycemia and hyperlipidemia. Apart from polysaccharides, other molecular fractions isolated from G. frondosa fruiting bodies or mycelial biomass have shown promising medicinal values as well. For instance, the protein components of G. frondosa, including glycoprotein, have shown anti-tumor [32], immune-enhancing [33], anti-diabetic, anti-hypertensive, anti-hyperlipidemic [34] and anti-viral effects [35]. Moreover, other small biomolecules in G. frondosa have been found to possess health benefits such as anti-inflammation [36], hypoglycemia [37], antitumor [38] and antioxidation [39].

Generally, proximate composition is determined by the methods suggested by the Association of Official Analytical Chemists (AOAC). The total carbohydrate content can be calculated by subtracting the percentages of ash, crude fat and protein [7][40]. For the determination of crude protein, the nitrogen conversion factor is 4.38 instead of the usual 6.25, due to the large amount of chitin that is usually contained within the fungus, a component that may interfere with the correct calculation of the result of total nitrogen [41].

1 Moisture and dry matter were based on fresh weight; others were presented based on dry weight. 2 For easy comparison, only the mean value is used. 3 The dry matter was represented by (1 − moisture/total) × 100%. 4 Amount of carbohydrate was calculated by subtracting crude ash, crude fat and crude protein. * Fruiting body was grown naturally. # Fruiting body was grown artificially.

According to the research findings of Kurasawa and coworkers [8], the composition of the G. frondosa fruiting body resembles that of normal cultivated mushrooms. It is worth mentioning that the crude fat content of the G. frondosa fruiting body is generally lower than the average crude fat content in cultivated mushrooms (4.3%), and the amounts of protein and carbohydrates are slightly higher than the average of other mushrooms (17.2% and 70.3%), indicating the excellent nutritional values of G. frondosa.

1 For easy comparison, only the mean value is used. 2 Not determined or not detected. # Fruiting body was grown artificially.

1 For easy comparison, only the mean value is presented. 2 Not determined or not detected. 3 Essential amino acid. # Fruiting body was grown artificially.