Metastasis is the process of dissemination of a tumor, whereby cells from the primary site dislodge and find their way to other tissues where secondary tumors establish. Metastasis is the primary cause of death related to cancer. This process warrants changes in original tumoral cells and their microenvironment to establish a metastatic niche. Traditionally, cancer therapy has focused on metastasis prevention by systematic treatments or direct surgical re-sectioning. However, metastasis can still occur. More recently, new therapies direct their attention to targeting cancer stem cells. As they propose, these cells could be the orchestrators of the metastatic niche.

Metastasis is an inefficient process in which cells from the primary tumor spread by releasing circulating tumor cells (CTCs) into vasculature towards a distant organ to colonize it, establishing metastasis. A process where only 0.01% of the cells that enter the circulation can successfully reestablish a new metastasis, and while this seems highly inefficient, it is more often than not a fatal step in cancer progression [1], [2]. Cancer stem cells (CSC) are the subpopulation of cells responsible for promoting angiogenesis, local invasion, distant metastasis, and resistance to apoptosis; moreover, epithelial tumor cells (mature population) gain invasiveness and migratory abilities through the process of epithelial-mesenchymal transition (EMT), which is where a complex network of interconnected factors and pathways meet, such as transforming growth factor-β (TGFβ), epidermal growth factor (EGF), insulin-like growth factor (IGF), WNT, Hedgehog, and Notch pathways, all of which regulate and promote CSC growth [3]–[5].

The spread of CSC from the primary tumor to a secondary site is a process highly dependent on signaling cues, such as hypoxia, acidic pH, and/or glucose deprivation [6]. CSC in the bloodstream or otherwise in the lymphatic system can cluster together with stromal cells (fibroblasts, endothelial, tumor-infiltrated myeloid cells, or pericytes) for improved metastasis potential. Once CSC attaches and develops with success, a pre-metastatic niche will form. Pre-metastatic niches additionally require exosomes or exosomal-like extracellular vesicles (ECV) from entrained bone marrow-derived cells and macrophages to start changes in the cells. Ideally building an effective microenvironment that serves as a fertile niche for tumor cell growth [8]–[10].

Researchers estimate 20-54% of malignant tumors develop metastasis. Primarily at lymph nodes, with the liver and lungs as the second most common sites of metastasis [11]. Colorectal cancer, the 3rd most frequent neoplasm, can progress to the liver (40-50%) and lung (10-20%) depending on the primary tumor's stage. Meanwhile, pancreatic ductal adenocarcinoma (PDAC) is one of the most aggressive cancers with high metastatic potential which caused metastatic disease 19–39% in the lungs and >50% in the liver. Interestingly, several studies have reported isolated lung metastases associate with better survival outcomes than patients with other solitary metastatic organs [14]–[16]. In the following, we will discuss differences between the cascade of events in primary tumors which promote the establishment of pre-niche and niche metastasis.

The physiological functions of the liver are related to the metabolism of nutrients absorbed by the gastrointestinal tract and the detoxification of dangerous molecules present in the circulation. These functions are responsible for a delicate balance between immune tolerance and immune response. Their correct functioning requires normal cytoarchitecture of the hepatic lobules [17].

Due to the total blood volume that circulates through the liver, about 30% of blood volume per minute, it is the preferred organ for metastasis development [18]. The portal vein is a vessel that carries blood from the gastrointestinal tract, gallbladder, pancreas, and spleen to the liver. The right portal vein is the continuation of the main portal vein, while it separates the left portal vein from the main portal vein at an acute angle [19]; which explains why the segment of the right lobe liver is the main target of metastases. Also, the blood circulation in the colon and proximal rectum drain through the hepatic portal system, while the blood of the distal rectum goes to the lung. This vascular organization correlates with the fact that colorectal cancer prefers liver metastasis, with the lung as the second favored metastatic site [20].

However, to allow hepatic metastasis development, the liver must present damage. There are several hypotheses regarding the pro-metastatic state consequent to cirrhosis, steatosis, and nonalcoholic fatty liver disease. Some authors state that altered hepatic cytoarchitecture creates an unfavorable environment [21]. Others report that these alterations slow the passage of neoplastic cells through the microcirculation and enhance cellular-vascular contact and stress micro thrombotic phenomena through the expression of adhesion molecules, facilitating metastasis[22]. Chronic inflammation that results from receiving nutrients, toxins, and microorganisms via the portal vein from the gut can leads to liver injury creating a microenvironment favorable for the increased growth of metastases [21].

Factors crucial for the formation of liver metastasis

Pre-niche is formed by the preconditions in specific organs in terms of nutrients, extracellular matrix, and immune cells necessary to generate a fertile soil before the arrival of CTC, which increases the success of metastasis establishing [24]. After that, primary tumors can induce stromal cell remodeling of the extracellular matrix which takes care of cell organization. To increase the survival of CTC from the hostile microenvironment, they usually form CTC clusters. Interactions between cancer cells and endothelial cells with an endothelial layer, and the underlying basement membrane VCAM, ICAM, or L1 molecules, expressed by the vascular endothelium, interaction with α4β1 integrin and αvβ3 integrin, play a central role in leukocyte recruitment to develop this process [22], [25].

Metastasis-associated macrophages (MAMs), in murine CRC models, have been shown to increase the extravasation of tumor cells and help in their survival by secreting growth factors and concomitantly inhibiting cytotoxic T cells [27]. Some key mediators in regulating immune responses are myeloid-derived suppressor cells (MDSC) which express CD11b+ and CD33+. CD11b is a subunit of the integrin adhesion molecule, which expresses in bone marrow-derived immune cells. CD11b was reported to promote myeloid cell migration to the tumor microenvironment, which secreted cytokines related to tumor growth and angiogenesis. Researchers relate the expansion of MDSCs to tumorigenesis in CRC, and the density of CD33+ MDSCs in the microenvironment was a negative prognostic factor in CRC patients. Recently reported higher expression (lymphocytes CD3+) in primary tumor than in hepatic metastases, while CD33 had higher expression in hepatic metastases than in primary tumor. In turn, CD33+ showed that more immunosuppression of cells in the liver may contribute to the poor response to immunotherapy [28]–[30]. Although to date, some cell types have been associated with better or worse prognoses of primary tumors, unlike in metastasis where there are many other factors involved, such as the treatment they are receiving; this may change the microenvironment and therefore favor the progression of the disease. In most patients, physicians do not focus the treatment used on destroying the cells responsible for tumor chemoresistance and progression, therefore this approach is being increasingly included in patients with already advanced stages, increasing their survival.

Factors involved in tumor progression and the development of metastasis is hypoxia, which in CRC is very common and becomes more aggressive, invasive, and resistant to chemo‐ and radiotherapy. It associates with the activation of transcription factors involved in the maintenance of EMT/CSC phenotypes and enrichment of CD44high, CD24low or ALDHhigh CSC population [37], [38]. A recent review by Gonzalez-Villareal in colorectal cancer metastasis emphasized EMT regulation, with members of the miR-200 family [24].

In liver metastasis of CRC, researchers observed an enhancement of fructose metabolism via the upregulation of enzyme aldolase B (ALDOB), hence providing extra fuel for metastatic outgrowth [49]. Thus, as the metabolic center of the entire organism, the liver appears to provide a unique milieu enabling or forcing cancer cells to assume specific metabolic activities for colonization. It involves molecular pathways for liver colonization, including nitric oxide and ROS, and the expression of adhesion molecules such as selectins and integrins. Also involved are phagocytosis, cytokines, such as TNFα and TGFβ, interferon gamma (IFNγ), interleukins (IL-1, IL6, IL8, IL-10, IL12, and IL18), growth factor monocyte chemoattract protein-1 (MCP-1), and macrophage inflammatory protein (MIP-1) released by KCs and HSCs [50]. Proinflammatory cytokines such as IL-6, preparing a permissive inflammatory pre-metastatic niche where circulating CRC cells can home and survive, colonize, and eventually form micro and macro metastasis. IL-6 then activates signal transducer and activator of transcription 3 (STAT3) signaling in hepatocytes, which produces serum amyloid A protein (SAA) that orchestrates the formation of a pro-metastatic niche in the liver. It has been reported that S1PR1–STAT3 upregulation in tumor cells induces IL-6, which activates S1PR1–STAT3 in MDSCs in the liver, leading to pre-metastatic niche formation prior to CRC cell arrival [51].

Recent works reported that type XII collagen was the most significantly upregulated collagen in cancer liver metastasis (CLM) and that there was a difference with the ECM of the CRC. Collagens that are present in metastatic disease were COL10A1, COL12A1, COL 14A1, and COL15A1. Also, collagen type IV has a strong association with liver metastasis in CRC.

Some factors influencing liver metastasis on CRC were found, but we know that tumor cells themselves, stromal cells, and the interaction between CRC cells and their microenvironment, all contribute to hepatic invasion. Until now, we had known about the establishment of the pre-metastatic niche but little about the metastatic niche itself. Therefore, the search for mechanisms and possible therapeutic targets that can reverse or change the prognosis of the disease is currently being continued since most patients at the time of diagnosis already arrive in very advanced stages of the disease, when the approach to treatment is more complex than just treating the primary tumor and preventing metastasis. Next, the management of patients with liver and lung metastases in two neoplasms that are on the rise without hereditary history will be reviewed.

The lungs are one of the most complex organs in the human body. Their function is to exchange oxygen from the external environment with carbon dioxide from the cardiovascular system. Its role in the development of metastasis can result after physical trauma that induces local inflammation (smokers, asthma, obstructive pulmonary disease, or pneumonia) and tissue damage, creating a favorable environment that attracts metastatic cells from distant sites. Also, it has been reported that lung inflammation in smokers or in people with lung diseases such as asthma, chronic obstructive pulmonary disease, and infections, such as pneumonia, are risk factors for lung metastases. Some factors related to the migration of cells and vascular permeability are CCL2, S100A8, and SAA3. Upregulation of fibronectin colocalized with LOX, and higher levels of expression of VCAM-1, a receptor for VLA-4 in patient samples of metastatic tumor nodules in the lungs and bone, have been found [23]. The pro-metastatic effect played by exposure to smoking is related to the activation of the ubiquitin-chemokine receptor type 4 (CXCR4) pathway, high tissue levels of E-selectin, activation of the nuclear factor kappa-light-chain-enhancer of activated B cells (NFκB), signaling in pneumocytes, increased chemokine ligand 2 (CCL2) expression, and macrophage infiltration in the lung microenvironment. Moreover, lung alveolar cells induce chemokine secretion, which recruits neutrophils. The latter, through the synthesis of arachidonate 5-lipoxygenase (ALOX5)-dependent leukotriene, may promote survival and proliferation of leukotriene B4-expressing metastatic clones [17]. Inflamed lungs recruit neutrophils to release Cathepsin G and neutrophil elastase and destroy the protein Thrombospondin 1 (Tsp-1), which protects lung tissue from metastasis. Another alternative, but not mutually exclusive, is that micro-metastatic foci are already present at the time of physical injury [24]. Therefore, it is believed that lung metastases depend on circulatory system involvement, which flows into the pulmonary arterial system through the subclavian vein via the thoracic duct from the lymph nodes invaded by tumor cells [25]. More recently, DPC4 loss is shown to be associated with EMT, tumor progression, and the presence pulmonary metastases [26].

Factors Crucial for the Formation of Lung Metastasis

Factors produced by cells in pre-niche can support survival and growth of disseminated tumor cells were in Figure 1. The interstitial space is the main site for lung metastasis, which is adjacent to the terminal bronchioles. Bronchioalveolar stem cells (BASC) are situated in the terminal bronchioles and present pro-surfactant apoprotein-C (SP-C), a marker for alveolar type II (AT2) cells, and CC10, a marker for club cells—both are related with the lung pre-metastatic niche. Bone marrow cells, club cells, and alveolar macrophages are also present in pre-metastatic lung [23]. 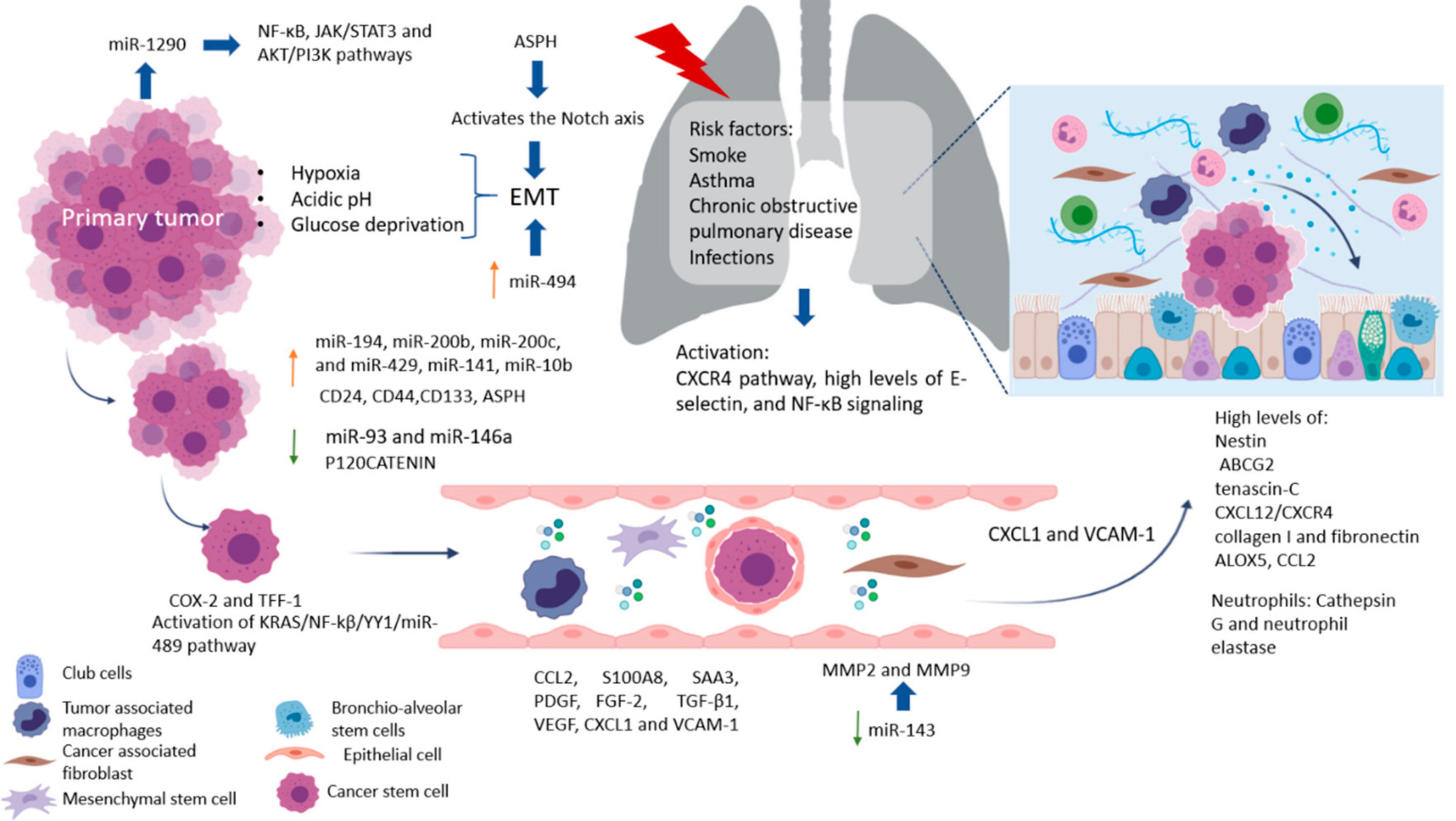