The innate immune system is activated when a pattern recognition receptor (PRR) sensor recognizes a danger signal. Danger signals that are common to pathogens are referred to as pathogen-associated molecular patterns (PAMPs). In recent years, it has become clear that some PRRs also recognize danger-associated molecular patterns (DAMPs), which are secreted by stressed and injured cells and cause an aseptic inflammatory reaction. Therefore, the pattern recognition mechanism is involved not only in acute inflammation, which is associated with pathogen infections, but also in inflammation associated with various chronic inflammatory diseases and bacteria inside and outside the body. The inflammasome is an intracellular molecular complex, which is mainly involved in innate immunity and is formed in response to danger signals associated with infection and injury. Inflammasome dysregulation is known to be associated with various diseases and conditions, and its regulatory mechanism has become of great interest in recent years. The concept of the inflammasome was proposed in 2002 based on the analysis of cryopyrin-associated periodic syndrome (CAPS), a hereditary autoinflammatory disorder [1]. In 2006, it was reported that inflammation in gout attacks was mediated by inflammasome activation by urate crystals, which became a focus of attention as a new molecular mechanism of aseptic inflammation [2].

PRRs aggregate with apoptosis-associated speck-like protein containing a caspase recruitment domain (CARD) (ASC) and caspase-1 to form the inflammasome, which induces caspase-1 activation. The activated caspase-1 induces cell death, called pyroptosis, and cleaves precursors of inflammatory cytokines, such as interleukin (IL)-1β and IL-18, to induce the extracellular release of their mature forms [3][4][5][6]. Cytokine secretion is known to be associated with cases of pyroptosis due to caspase-1 activation or extracellular release of organelles. Caspase-1 cleaves gasdermin D to form cell membrane pores, causing pyroptosis, which is accompanied by the outflow of cytoplasmic components and induces an inflammatory response by releasing mature inflammatory cytokines [7]. Thus, inflammasomes play a role in defense against infection by inducing both immune activation by inflammatory cytokines and the elimination of infected cells via pyroptosis.

2. Structure of the Inflammasome

The basic structure of the inflammasome consists of a PRR as a sensor molecule, ASC as an adapter molecule, and caspase-1 [11]. PRRs include Toll-like receptors (TLRs), NLRs, the retinoic acid-inducible gene-I-like receptor (RLR), and the pyrin and HIN domain (PYHIN) receptor family which includes the absent in melanoma 2 (AIM2) -like receptor (ALR) and C-type lectins. In the NLR subfamily, NLRP1, NLRP3, NLR family CARD-containing 4 (NLRC4), NLRP6, and NLRP12 are commonly known [12][13].

Each of the constituent molecules of the inflammasome has a PYD and CARD, which are domain structures responsible for the characteristic intermolecular interactions and interact in a homophilic binding mode. For example, the structure of the NLRP3 inflammasome is presented in Figure 1. In the NLRP3 protein, there are three core domains [1][2]. The NACHT [NAIP (neuronal apoptosis inhibitory protein), CIITA (MHC class II transcription activator), HET-E (incompatibility locus protein from Podospora anserina), and TP1 (telomerase-associated protein)] domain promotes self-oligomerization and ATPase activity. NACHT is required for the activation of inactive procaspase-1 into active caspase-1 and subsequent homo- or heterooligomerization, leading to autocleavage and secretion of IL-1β and IL-18. The N-terminus contains a PYD, which binds to caspase-1 via an adapter protein (ASC) to form a complex. The C-terminus contains a leucine-rich repeat (LRR), which plays an essential role in the responsiveness to danger signals. Inflammasome assembly is inhibited by the LRR domain, whose activity is neutralized by the activation signal from PAMPs or DAMPs. ASC includes two transduction domains, a PYD, which can connect to the upstream NLRP3, and a CARD, which can connect to the downstream caspase-1. 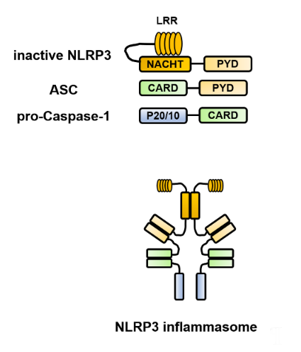 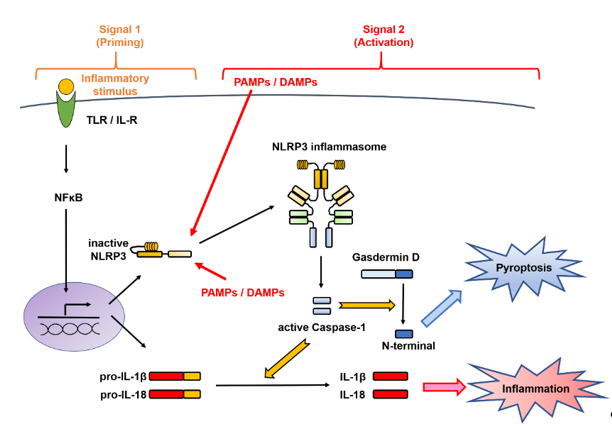 Each PRR recognizes a different danger signal [15][16] (Figure 3). Since pathogen-derived PAMPs mainly activate these PRRs, the latter are considered to function as a defense against infection. On the other hand, NLRP3 is activated not only by PAMPs but also by endogenous or exogenous DAMPs and, therefore, is considered of importance in aseptic inflammation. Since there are various stimulators of NLRP3, it is considered that NLRP3 is activated by recognizing a common signal induced by danger signals. 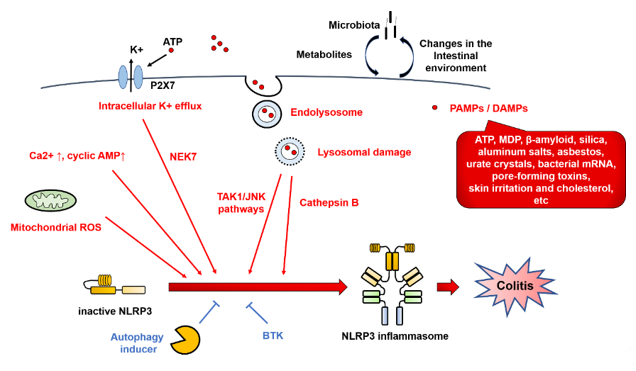 Lysosomal damage is triggered by endogenous uric acid crystals and cholesterol crystals or by exogenous particles, such as silica and asbestos. NLRP3 is activated by the intracellular release of cathepsin B, which is a lysosomal enzyme. The TGF-β-activated kinase 1 (TAK1)/c-Jun N-terminal kinase (JNK) pathway, which is a mitogen-activated protein kinase signaling pathway, is activated via lysosomal disruption, and this kind of activation is required for full activation of the NLRP3 inflammasome [20]. Silica crystals and aluminum salts activate NLRP3 inflammasomes via destabilization of phagosomes. Acidification of phagosomes or inhibition of cathepsin B activity impairs NLRP3 activation [21].

ROS derived from organelles positively regulate NLRP3 inflammasome activity. Mitochondria are a major intracellular source of ROS, and thus, mitochondrial function plays an important role in modulating inflammation. Mitochondrial ROS are produced when inhibition of the electron transport chain or removal of abnormal mitochondria via autophagy (mitophagy) is impaired [22]. Mitochondrial ROS are required for non-transcriptional priming of NLRP3, and NLRP3 deubiquitination is a prerequisite for activation [23]. On the other hand, it has been reported that ROS inhibitors block priming of the NLRP3 inflammasome but not its activation [24].

In addition, NIMA-related kinase 7 (NEK7), protein kinase R, and guanylate-binding protein 5 (GBP5) link these common pathways with NLRP3 [11][25]. NEK7 is an essential protein that acts downstream of the K+ efflux pathway to mediate NLRP3 inflammasome assembly and activation [26]. NEK7 is involved in the regulation of the cell cycle, mitotic spindle formation, and cytokinesis. Activation of the NLRP3 inflammasome by NEK7 is restricted to the interphase of the cell cycle [27].