The electrocatalytic activity of oxygen reduction reaction (ORR) significantly determines the performance of current energy conversion and storage devices, including various fuel cells and metal–air batteries [1][2][3]. Due to the sluggish kinetics of the ORR process, electrocatalysts have usually been required to accelerate the reaction rates and decrease the overpotentials [4]. Currently, platinum (Pt)-group metal (PGM) based materials have been broadly utilized and regarded as the most effective electrocatalysts for ORR catalysis [5][6]. However, the disadvantages of scarce resource, high-cost and poor durability greatly limit their further scale-up applications [7]. In this regard, a great number of efforts have concentrated on the development of cost-effective and high-performance candidates to replace the state-of-the-art PGM-based electrocatalysts [8][9][10].

Up to now, transition metal compound based and heteroatom doped metal-free carbon-based materials are two representative types of PGM-free electrocatalysts for ORR [11][12]. For example, transition-metal-nitrogen-carbon (M-N-C), transition metal oxides (TMOs), nitrides (TMNs), and phosphides (TMPs) based carbon hybrids [13][14][15][16], such as single-atom transition-metal-doped (Fe, Co, Mn, etc.) [17][18], have been well accepted as the promising candidates to replace PGM-based electrocatalysts. In these transition-metal-based electrocatalysts, Mx-Ny sites [19][20] or pyridinic and graphitic-N [21] have been recognized as the main active sites. Recently, different kinds of carbon materials (carbon nanotube, graphene, carbon nanofiber, etc.) have been developed as high-performance ORR electrocatalysts due to high electronic conductivity, excellent stability, tunable morphology, and facile functionality [22]. Although investigations into carbon nanotube and graphene as electrocatalysts have attracted significant attention for ORR electrocatalysis, scaled-up application of such carbon nanomaterials is still limited by high cost or deficient activity [23][24][25]. Fortunately, more and more inexpensive methods have been proposed to prepare graphene with high quality. For example, Tour and coworkers have developed a less expensive approach using six easily obtained raw-carbon-containing materials including cookies, chocolate, grass, plastics, cockroaches, and dog feces to grow graphene directly on the back of a Cu foil at 1050 °C under H2/Ar flow [26]. In recent years, designing efficient carbon electrocatalysts with sustainable and abundant biomass materials as precursors have been rapidly emerged owing to their cost-effective fabrication and environmentally friendly [27]. At present, various biomass materials have been reported as promising precursors to synthesize porous carbon, such as sugar [28], lignocellulose [29], animal biomass [30][31], natural cattail fibers [32], haddock peel [33], dandelion seeds [34], mulberry leaves [35], chitosan [36], gelatin [37], chitin [3] etc. Besides the commonly used method of thermal decomposition to prepare biomass-derived carbon electrocatalysts, several strategies including activation [38], hydrothermal carbonization [39][40], molten salt carbonization [41] and template method [42][43] have been proposed. Except for their renewable and sustainable properties, rich heteroatoms composition and inherited porous structure are two desirable features [30][32]. Biomass with natural pore structures and abundant active sites are promising to afford a tailorable template for electrocatalyst synthesis. However, it should be noted that the structural features and chemical composition of biomass would be different from region to region, thus resulting in a diverse performance.

There have been several valuable reviews on the achievements of biomass-derived carbon electrocatalysts including their preparation, physicochemical properties and ORR applications [25][44][45][46][47]. However, the progress focusing on the optimization strategies of pore structure and active site for oxygen electroreduction has not been specifically summarized yet. Moreover, this research field is developing rapidly. Therefore, it is highly essential to provide a timely review as well as in-depth understanding of optimization strategies on ORR performance by considering them in entirety (Figure 1). 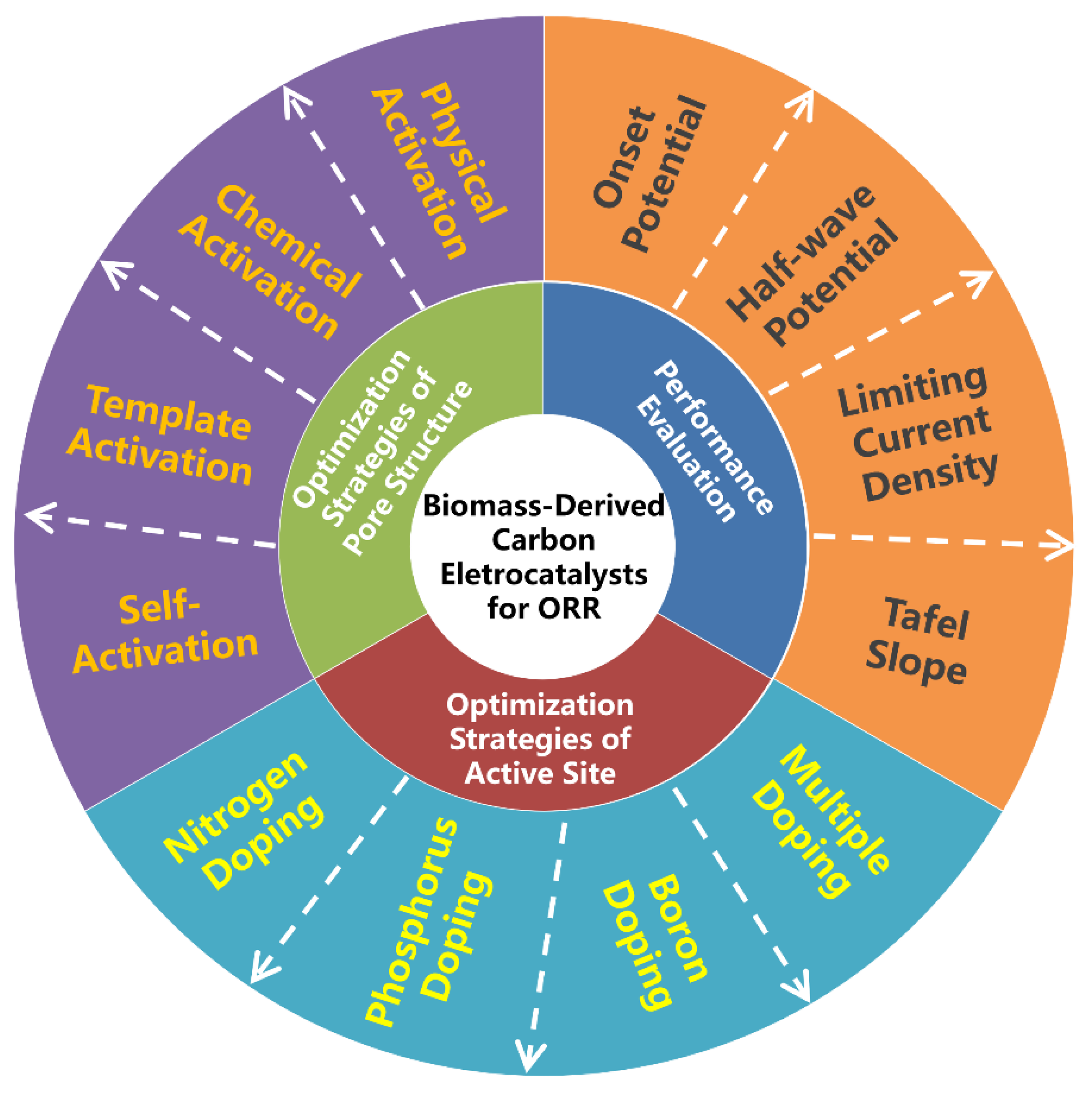 To reliably evaluate the ORR performance of biomass-derived carbon electrocatalysts [37], constructing a general and standard procedure is highly necessary. So far, the widely adopted method to assess the intrinsic activity of catalysts is based on the rotating disk electrode (RDE) and rotating ring disk electrode (RRDE) measurement [48]. Such method is capable of avoiding the mass transfer concerns and thus affording a stable ORR kinetic current density (jk), because the working electrode rotates at a high speed during the evaluation process (Figure 2a) [44]. Typically, ORR measurement is carried out in a three-electrode system, in which the electrocatalyst is the working electrode, an Ag/AgCl or Hg/HgO electrode is the reference electrode, and a Pt wire is the counter electrode [49]. The electrocatalysts are usually dispersed in solvent with Nafion as binders to form a uniform slurry. Then the slurry is drop-casted on glassy carbon (GC)-based RDE or RRDE [50]. Of note, the quality of drop-casting film and loading amount of electrocatalyst directly affects the ORR kinetics. Therefore, uniform catalyst films and appropriate catalyst mass loadings on the electrode are essential to obtain an accurate ORR performance, including onset potential (Eonset), half-wave potential (E1/2), limiting current density (jL) and Tafel slope parameters [51]. A positive shift of Eonset or E1/2, large jL, and small Tafel slope indicate high ORR activity and fast ORR kinetics, respectively [52].

Generally, two ORR pathways have been proposed: one is the direct four-electron (4e−) reduction pathway, the other is the indirect two-electron (2e−) peroxide pathway (Figure 2b) [44]. O2 can be directly reduced to H2O through the 4e− pathway with a rate constant k1; alternatively, it can also be reduced to adsorbed hydrogen peroxide (H2O2,ad) through the 2e− pathway with a rate constant k2 (HO2− in alkaline medium and H2O2 in acidic medium). The amount of H2O2 was calculated according to Equation (1). Subsequently, H2O2,ad could either be electrochemically reduced to H2O with a rate constant k3, or could be chemically decomposed to O2,ad with a rate constant k4 on surface, and desorbed into electrolyte with a rate constant k5. The suitable electrocatalyst drives the ORR process towards direct 4e− reduction pathway, which requires high current efficiency and fewer peroxide species [53]. The selectivity of the electrocatalyst is usually described with the number (n) of transferred electrons, which can be calculated by K-L equation and RRDE measurement [54]. The number (n) was calculated according to Equation (2).

Although biomass-derived carbon electrocatalysts show excellent ORR activity in RDE measurements, it is still difficult to integrate such catalysts into energy conversion devices, especially in H2-O2 fuel cells. Biomass materials are highly abundant and economical, but there has not been much progress yet in large-scale applications. Using biomass-derived carbon materials as substrates to reduce the noble metal loading is a promising strategy, which can simultaneously enhance the electrocatalytic activity and electrochemically active surface area. Here, we have demonstrated that the rational design of pore structure and active site plays a crucial role for synthesizing biomass-derived carbon electrocatalysts with satisfactory physicochemical and electrochemical properties. It is believed that developing effective and green synthetic methods will be a promising strategy to achieve more sustainable platforms.

On the other hand, in order to increase the competitiveness of biomass-derived carbon electrocatalysts for ORR, enhancing the intrinsic activity through optimizing active sites is urgently required. Consequently, understanding the catalytic mechanism of active sites and the relationship between mass transfer and pore structure for ORR process is important [59]. The in-depth investigation on these mechanisms helps to decide what types of biomass precursors should be chosen and what preparation methods should be performed. With the rapid development of materials science and technology, the community should further broaden the practical applications of biomass-derived carbon electrocatalysts in ORR-related devices, such as water splitting, supercapacitors [60][61], lithium-ion batteries [62][63], and CO2 reduction, etc. In this way, large volumes of biomass and biowaste can be truly turned into a valuable resource and a sustainable society can be really established.