Exoskeletons are orthoses of a certain kind—devices that work in harmony and parallel with their users (humans) in order to augment physical performance and are able to complete certain tasks or movements. In order to achieve such coordination, the device must be fitted to the user’s dimensions.

The exoskeletons’ limits are set only by the state of current technology and human imagination. This means that, with the previous definition, the exoskeletons can be used in any physical activity of a person. However, these constraints keep this research field from being fully exploited to improve the life quality of people. Nevertheless, the current development of exoskeletons is historically growing, creating the necessity to formalize this research field to accelerate the current developments.

With the necessity of formalizing this research field, and the wide variety of possibilities of exoskeletons, the requirement to differentiate between each exoskeleton, using their design characteristics, is needed.

Moreover, another way to categorize exoskeletons is by the technology powering them. Some exoskeletons are hybrids, defined as having a combination of two or more distinct[3] technologies powering the exoskeleton. The next category is according to its purpose, which could be to assist (performance exoskeletons) and/or rehabilitate (recovery exoskeletons—rehabilitation being defined as the restoration by therapeutic means to an improved condition of physical function[4]). Assistance is the act of helping or assisting someone[5]. The kind of help given by an exoskeleton could vary from one to another.

Two of the most antique exoskeletons date back to the 19th century in the former Russian Empire by Nicholas Yagn. These devices were called “apparatus for facilitating walking, running, and jumping” and “apparatus to facilitate walking and running”[6][7]. These exoskeletons are some of the oldest designs, if not the oldest, in the world. Their modes of function were merely mechanical, using springs and a unique design to redistribute the energy given by the user while moving. The objective of both devices was to decrease the fatigue of a person walking, running, or jumping[7].

This set the starting point for modern exoskeletons. Even though their designs are not used in the modern times, the principle upon which they were built, the facilitation of tasks, lives on in present-day exoskeletons.

Another invention was created following Yagn’s principle at the beginning of the 20th century. Lesley C. Kelley designed a device that was focused on facilitating walking and running, while relieving the strain and fatigue for the muscles used[8]. This design was much smaller than Yagn’s design, although this also limited the number of activities it could facilitate.

Throughout the 60s, further exoskeleton designs were developed. Financed by General Electric and the US Army–Navy in 1965, the “Hardiman I” was created, a full-body powered exoskeleton designed to augment the strength and endurance of the user. This system was powered by hydraulic and electrical systems[9].

The “Hardiman I” was not the only exoskeleton to be invented at the time; there was another full-body powered exoskeleton made by Neil J. Mizen, as part of the Cornell Aeronautical Laboratory. This exoskeleton was powered by electromechanical actuators, specifically servo-motors, that responded to a person’s normal movement and amplified their capabilities[10].

As there was more technology at the time, the exoskeleton created did not resemble its predecessors. The 60s marked a turning point in exoskeleton development. The advancements were built upon the foundation that was already established by previous models and influenced by science fiction. Iterations that were built after this period maintained certain elements but combined them with emerging technologies of the time.

In the following decades, the advances made in science and technology allowed for further improvements in the area. Thus, in the 70s, 80s, and 90s a wide variety of exoskeletons was developed, each one with a specific use. In the late 70s and early 80s, an arm exoskeleton was developed, consisting of a mobile arm support prototype that helped with shoulder and elbow movement, and in certain cases, improved muscular strength and was used in rehabilitation[11]. This device was classified as an orthosis focused on supporting the arm. Nevertheless, this specific orthosis is also an exoskeleton powered by a pneumatic system, making it an active exoskeleton.

In the late 80s, a similar device to Yagn’s was made and patented. The “Mechanical Leg-Propulsion Assistance Device” was similar to Yagn’s device, as they shared objectives and a general mode of operation. This device was a leg-propulsion assistance device provided by mechanical systems that worked in combination with the movement of the user[12]. This device can be classified as an exoskeleton focused on the lower limbs, due to the improvement of the physical performance of a person’s legs. This device can also be defined as a passive action exoskeleton, due to the mechanical systems that allow the system to operate.

The “Human Bipedal Locomotion Device” was invented at the beginning of the 90s. This device was intended to be worn on the whole body, even though it only focused on the lower limbs. Propelled by mechanical systems, specifically springs, this device was designed to assist a person while walking or running, allowing the user to have large steps or do trampoline-like jumps[13].

In the mid-90s another full-body exoskeleton was created, using hydraulic systems to power the movement and a microprocessor to control the actuators. This design is an example of an exoskeleton with a performance purpose[14]. This exoskeleton exemplifies how, over the years, exoskeletons evolve with the development of new technologies.

The previous exoskeletons are presented in the following chronological timeline in Figure 1.

In the 21st century, the development of computers and new dedicated software boosted research in many fields. The exoskeleton field was benefited positively, as the access to new technologies increased, such as modeling and simulating software.

The Berkeley Lower Extremity Exoskeleton (BLEEX) demonstrated the advances previously discussed. Originally, the BLEEX project was a lower limb exoskeleton capable of carrying an external load in addition to the exoskeleton’s weight. Furthermore, due to the hydraulic actuators and control scheme, this exoskeleton was capable of supporting 75 kg[15], as seen in the left part of Figure 2. The complete design of the BLEEX exoskeleton was made with CAD software, providing a way of displaying each piece of the exoskeleton and allowing for an error correction phase before the manufacturing. This allowed the saving of time and resources by preventing the manufacturing of faulty prototypes.

The BLEEX set the precedent of the exoskeletons capable of carrying an external load. In the following years the carrying of an external load became the main concern of exoskeleton development. An important design for said purpose was the quasi-passive leg exoskeleton for load-carrying augmentation. This was a lower limb exoskeleton that transferred most of the payload applied. The exoskeleton was made with mechanical systems and the validation of its performance was done by measuring the rate of oxygen consumption of the user. The experimental rate was compared to the measures of a similar exoskeleton, in order to validate its performance[16]. This design can be appreciated in the center of Figure 2.

The modern technology of the 21st century also brought improvements to exoskeleton design, allowing for the possibility of designing more personalized exoskeletons, focused on specific pathologies or movements intended by the user instead of the all-in-one exoskeletons. The “Motion Assisting Device” is an example of such specific designs. The design is supported only in the waist and thigh, propelling the movement through the thigh support and the actuator between both supports[17], as seen in the right part of Figure 2.

The state-of-the-art comprises several exoskeletons made in the last few years. However, due to the large number of exoskeletons, the work reviewed only 75 of them, as shown in Figure 3 (available in the original article).

Just to clarify, there are far more exoskeletons in existence during the reviewed period; recall the previous scientometric indicators given from 2016 to 2020: there were 5244 works published related to exoskeletons. Hence, the aim of this work is to utilize just a portion of the exoskeletons to demonstrate the robustness of the proposed categorization model. This model is just the introduction for the formalization of this research area.

After the review of 75 exoskeletons, a general classification was determined, leading to the diagram proposed in Figure 4. 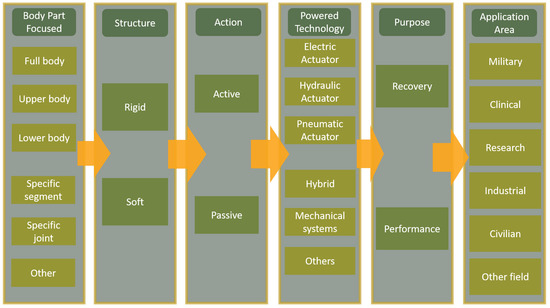 The general categorization suggests several feasible exoskeleton categories. Such categories have general classes, due to the wide quantity of exoskeletons in existence, and the structure, the body part focused on, the action, the power technology, the purpose, and the application area varying from one to another. Thus, we propose general classes in each classification category, allowing researchers to consider all the exoskeletons in existence, regardless of how specific an exoskeleton could be to a pathology, an application area, or a body part.

For instance, the exoskeleton’s purpose could be recovery, performance, or even both. The purpose of each one is not necessarily tied to the specific pathology. For example, a patient who has suffered a stroke could need a recovery exoskeleton; and after the rehabilitation, the same patient could use a performance exoskeleton for the same pathology[18]. Moreover, explaining each exoskeleton using this classification is an optimal way to understand the capabilities of the same exoskeleton, without further explanations of the device’s technicalities.

Subsequently, the diagram of Figure 5 will be further explained in detail, for the readers to understand what may or may not be included in each class of each category in order from left to right and top to bottom of the diagram.

The second easiest way to differentiate an exoskeleton is by its structure, resulting in the establishment of only two classes, rigid and soft. Rigid exoskeletons are those whose structural components attached to the user’s body are made with hard materials. Such materials include metals, plastics, fibers, etc. On the other hand, soft exoskeletons, also called exo-suits, are made with materials that allow free movement of the structural components. Exo-suits are often made with, yet not restricted to, textiles.

The next category goes hand in hand with the previous one. The powered technologies are separated into four main classes, with one specific class for hybrid and one for any other non-common power technology. The four main classes comprise the electric, hydraulic, and pneumatic actuators as the active action, and the mechanical systems as the passive action. The electric actuators comprise any kind of electric motor that activates the exoskeleton’s movements.