Mitochondrial microRNAs (mitomiRs) are endogenous small, single-stranded molecules of noncoding RNA (19–23 nucleotides) present in mitochondria that represent a new level of control of gene expression. These sequences can be either encoded in the nuclei - however the importing mechanism is still not fully established - or may be originated straight inside mitochondria, from mitochondrial genome-derived mRNA. Undeniably, mitomiRs typically act by regulating gene expression inside mitochondria at the post-transcriptional level with a significant role both in physiology and in pathology. Unveiling mitochondrial microRNAs biological function and their targets will propel the development of innovative therapeutic and diagnostic tools.

MicroRNAs (miRNAs) are endogenous small, single-stranded molecules of noncoding RNA (19–23 nucleotides) that represent a new level of control of gene expression. miRNAs act at the post-transcriptional level to modulate protein-coding genes, either by blocking the translation of messenger RNA (mRNA) or by actively encouraging its degradation, and it is well reported that each miRNA can target multiple genes [1]. Given that miRNAs are now postulated as master regulators and fine tuners of gene expression, these molecules might enclose relevant diagnostic, prognostic and therapeutic applications.

miRNAs are currently documented as relevant players in almost every biological process, from cell proliferation to differentiation, apoptosis and organogenesis [1][2]. The finding and the study of miRNAs has noticeably changed the classical understanding of gene expression and our comprehension of the biogenesis and function of miRNAs has markedly grown in recent years. Some associations between miRNA deregulation and human disease have been reported in different medical fields [3]. The research in this new ‘arena’ has exposed the enormous potential of miRNAs as tools for diagnostics or therapeutics. More specifically, several studies have already explored the modulation of mitochondrial DNA genetics by miRNAs [4]. Mitochondria, besides chloroplasts in plants, are the only organelles that possess a separate genome, the so-called mitochondrial DNA (mtDNA). Mutations in this DNA molecule have been shown to be involved in an assortment of both physiological (e.g., heat production, reactive oxygen species (ROS) production, apoptosis, cellular differentiation and aging) and pathological traits, including neurodegenerative diseases, diabetes, metabolic syndrome and cancers [5][6]. Additionally, there is a plethora of crosstalk signals that allow the communication between the nuclear and mitochondrial genomes. This mechanism of regulation is vital for the activity of the whole cellular machinery, basically by modulating mitochondrial biogenesis and metabolism [7] through reciprocal mitochondrial-to-nucleus communication [8][9].

Regarding miRNAs in mitochondria, it is well-recognized nowadays that several cellular mechanisms involving mitochondria are regulated by many genetic players that originate from either nuclear- or mitochondrial-encoded small noncoding RNAs (sncRNAs). Growing evidence collected from whole genome and transcriptome sequencing highlight the role of distinct members of this class, from short interfering RNAs (siRNAs) to miRNAs and long noncoding RNAs (lncRNAs) [11]. Some of the mechanisms that have been shown to be modulated are the expression of mitochondrial proteins itself, as well as the more complex coordination of mitochondrial structure and dynamics with its function [12][13][14]. The mechanisms involved in mitochondrial miRNAs transport are now being increasingly exposed and therefore more and more light is being shed upon mitochondrial miRNAs’ targets to determine their role in this unmapped cellular context [11][15]. Indeed, several studies have already disclosed the presence of miRNAs in mitochondria [13]. However, the mechanism by which the nuclear-encoded miRNAs are imported into mitochondria is still not fully established (see Reference [15] for a follow-up). On the other hand, numerous mitomiRs may be originated straight inside mitochondria, from mitochondrial genome-derived mRNA. Undeniably, mitomiRs typically act by regulating gene expression inside mitochondria at the post-transcriptional level [16]. Further than that, some of the mitomiRs may also target nuclear-encoded mRNAs localized on the mitochondrial surface [11]. Taken all together, these discoveries clearly reveal the significant role of mitomiRs in regulating mitochondrial gene expression and mitochondrial functions in both physiology and pathology [17], as summarized in Figure 1. 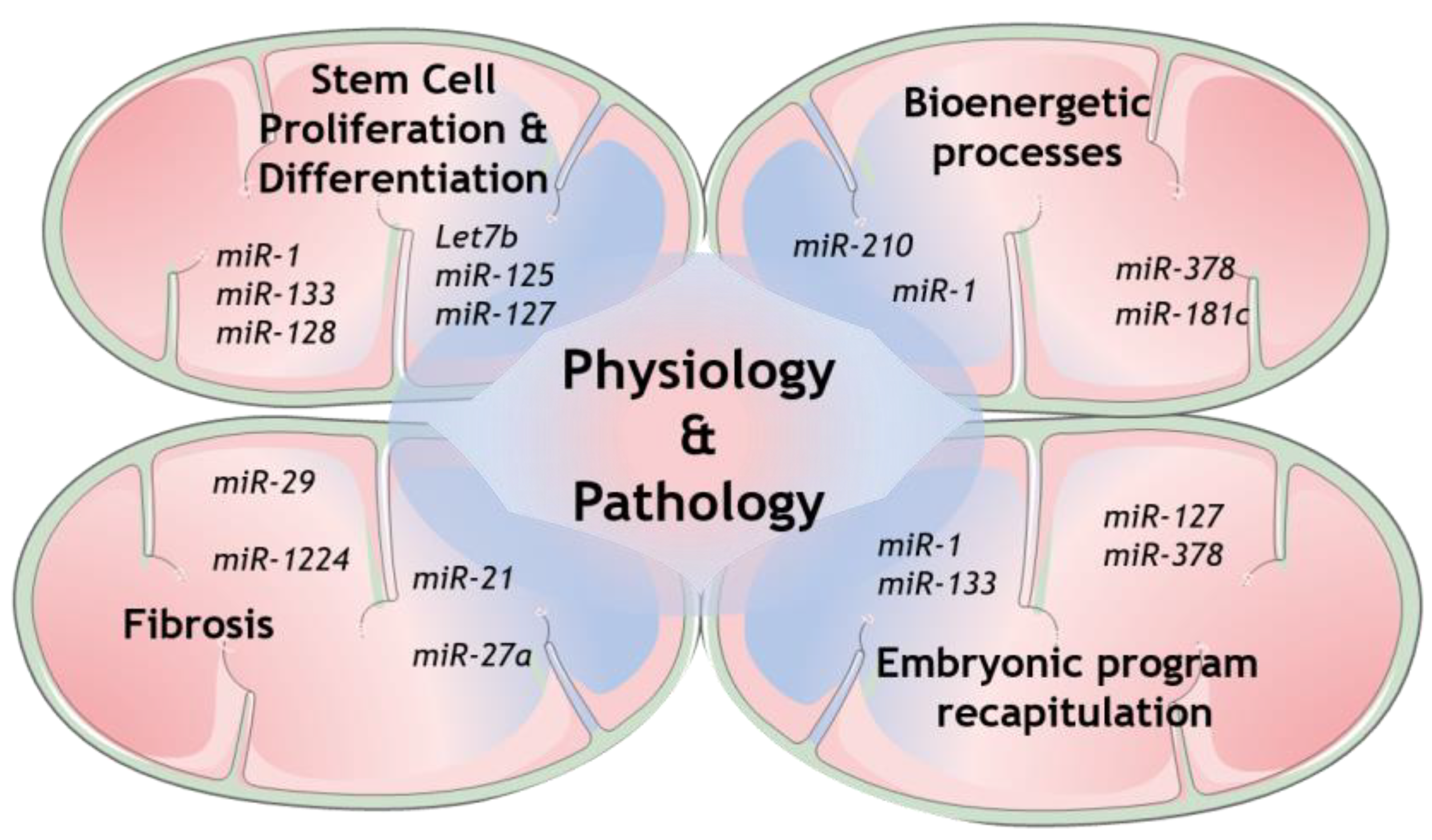 Figure 1. Modulation of physiologic and/or pathologic mechanisms by mitochondrial miRNAs. Several mechanisms that contribute to physiopathology require some biological functions that are modulated by different mitochondrial microRNAs.

Tissue repair and regeneration depends on miRNA regulation as these small molecular silencers play a fundamental part in post-transcriptional gene silencing. Multiple key biological processes important for regeneration such as cell growth and proliferation, differentiation and apoptosis, as well as mitochondrial function, are tightly controlled by them [18][19]. Regulation of miRNA expression levels is crucial as small changes in basal conditions are sequentially propagated and amplified throughout different biological pathways, ultimately leading to changes in cell phenotypes [20]. Therefore, a plethora of aspects in tissue regeneration could potentially be controlled by the manipulation of miRNAs.

Currently, different evidence shows that both nuclear-encoded miRNAs imported to mitochondria and mitochondrial genome-derived miRNA, both defined as mitomiRs, may influence mitochondrial dynamics, a fundamental process for tissue homeostasis (Table 1) [21][22]. In fact, regulation of how and how much energy cells require strongly impacts stem cells’ fate, controlling the ability of stem cells to decide when to exit from their quiescent state.

Table 1. Summary of mitomiRs function and its known targets.

Tissue regeneration after injury is a complex and a highly metabolically demanding process [41]. Thus, regulation of the mitochondrial genome by mitomiRs may impact the expression of key components driving ATP synthesis, consequently influencing regenerative mechanisms (Table 1). Mitochondrial miR-181c, miR-1, miR-338 and miR-210 have been shown to target multiple proteins that modulate the mitochondrial electron transport chain [18][66], as depicted in Figure 3. The impact of miR-181c was demonstrated both in vitro [29] and in vivo [42] and mechanistically described by binding to 3’UTR mitochondrial cytochrome c oxidase subunit (COX)-1, which affects the function of mitochondrial electron transport chain complex IV. While forced overexpression of miR-181c altered mitochondrial metabolism and ROS generation, contributing to heart failure, its inhibition may be enough to balance mitochondrial bioenergetics, potentiating cardiac remodeling or at least controlling cardiac damages. Recently, Banavath et al. showed that the loss of miR-181c, through MICU1 upregulation, a specific promoter of Sp1, may protect the heart from injury [67]. Mitochondrial miR-338-5p in neural cell culture systems was demonstrated to modulate the expression of COX-IV and subunits of the ATP synthase complex [33][68]. When anti-miR-338 was transfected into axons, the metabolic oxygen consumption was increased by about 50% when compared with the nontargeting cells, potentiating cell survival. Furthermore, miR-378 was shown to have an important role in cardiac remodeling. This miRNA is highly expressed in diabetic cardiac mitochondria and it reduces ATP synthase activity by decreasing mitochondrial ATP6 expression. This effect was further tested in vitro by overexpression of mitomiR-378 in HL-1 cells [69]. Consistently, in vivo delivery of miR-378-3p antagomir preserved ATP6 protein levels which balance the bioenergetic deficits, contributing to an adequate cardiac pump function [69]. 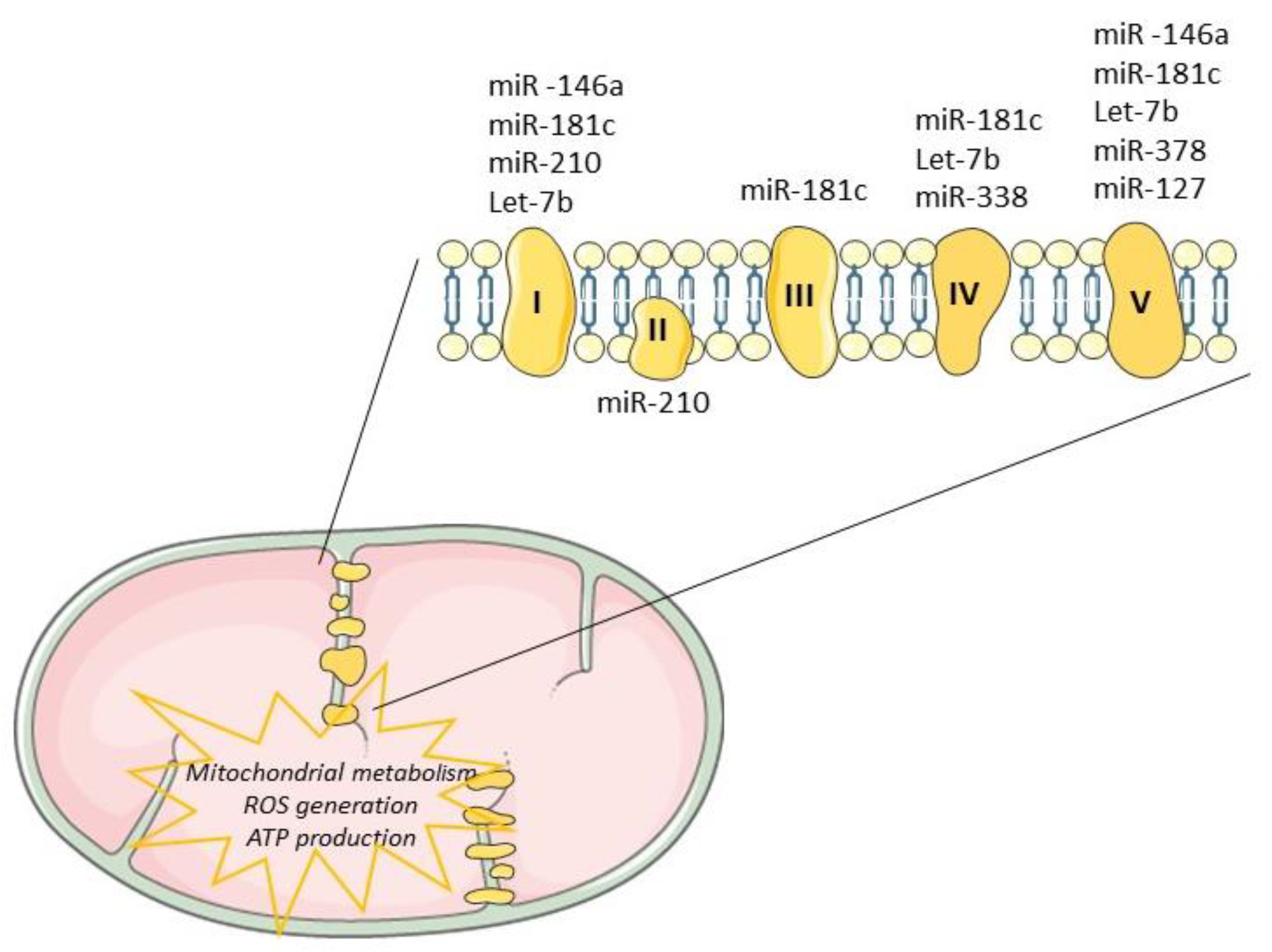