The term ionone is derived from “iona” (Greek for violet) which refers to the violet scent and “ketone” due to its structure. Ionones can either be chemically synthesized or endogenously produced via asymmetric cleavage of β-carotene by β-carotene oxygenase 2 (BCO2).

Ionone is a ketone compound composed of 13 carbons with a monocyclic terpenoid backbone [1]. Several isomeric ionones exist in Nature, including α-ionone, β-ionone and others. Ionones are found as secondary plant metabolism products that share mevalonic acid as a common precursor [2]. They are widely present in fruits and vegetables comprising β-carotene and are found in plant oils, for example oils from Petunia hybrida, Boronia megastigma Nees and especially Viola odorata [3][4][5][6]. It can be found in cow’s milk where is passively transferred after consumption of alfalfa pasture [7][8].

α-Ionone and β-ionone are 3-buten-2-ones substituted by 2,6,6-trimethyl-2-cyclohexen-1-yl and 2,6,6-trimethyl-1-cyclohexen-1-yl groups respectively, at position 4 (Table 1) [9][10]. The ionone stereoisomers, α-ionone and β-ionone, are pale yellow-to-yellow liquids [11] with a woody floral scent. However, the former has an extra honey olfactory aspect [12]. α-Ionone and β-ionone share similar physicochemical properties [9][10][11][13][14][15][16][17]. They are both soluble in most fixed oils, alcohol and propylene glycol but insoluble/very slightly soluble in glycerin/water, respectively [11].

α-Ionone and β-ionone are both widely used as aroma ingredients in various industries, including cosmetics (e.g., shampoos, soaps) and non-cosmetic (e.g., household detergents and cleaners) products. The Flavor and Extract Manufacturer’s Association (FEMA) declares that both ionones are Generally Recognized As Safe (GRAS) when used as flavoring agents. The US FDA has also approved their use as flavoring agents [9][10].

The wide spectrum of effects and various signaling cascades attributed to β-ionone might be due to the different cell repertoire [18]. In addition, β-ionone might be interacting with a wide range of receptors, not constrained to OR51E2, such as the reported interaction with AR and RXR-α [20][30]. Moreover, the hydrophobic properties of β-ionone allows it to traverse cellular membrane, activating cytosolic OR51E2 in various intracellular compartments [18][19].

β-ionone acts as an agonist of OR51E2. On the other hand, α-ionone activity on OR51E2 is not as clear. Several studies reported that α-ionone antagonize OR51E2 which prevented or suppressed the effects of β-ionone, notably it has been utilized to confirm OR51E2 activation by β-ionones [19][21][22][40]. For example, Neuhaus found that α-ionone had no effect on the intracellular calcium concentration and it inhibited the β-ionone induced increase in intracellular calcium and anti-proliferative effect in prostate cancer cells [21].

In contrast, Sanz et al. showed that α-ionone is a real agonist of OR51E2. Notably, α-ionone primarily induced growth of LNCaP cells and prostate tumors in mice whereas β-ionone increased cell invasiveness. These findings are in agreement with biased agonism phenomena reported with GPCR [41]. Thus, it is proposed that each ionone induces a distinct downstream signaling cascade depending on the G protein or β-arrestin coupled [26].

In addition, α-ionone elicited distinct responses depending on its dose; moderate doses augmented LNCaP cell invasiveness while higher doses did not (instead it sustained cell growth). It is proposed that α-ionone modulates different cellular signaling cascades depending on doses. For instance, ionone might be partially or fully activating OR51E2 that triggers distinct downstream signaling cascades. It could also mean that α-ionone is antagonizing OR51E2 at higher doses. Nevertheless, the higher doses of α-ionone activating OR51E2 in transfected HEK293 cells supported the former hypothesis [26].

Several compounds have been synthesized and shown to exert anticancer, anti-inflammatory and antimicrobial activity.

3-Hydroxy-β-ionone (Figure 1) retarded the proliferation, colony formation and cell migration of squamous cell carcinoma. In addition, it caused apoptosis and cell cycle arrest at G2/M phase in these cells. Apoptosis was indicated by an increase in cleaved caspases and Bax with a decrease in Bcl-2 [42]. It appears that 3-hydroxy-β-ionone is produced endogenously from BCO2 asymmetric cleavage of zeaxanthin, a carotenoid with a 3-hydroxy-β-ionone ring [43].

Sharma and his team combined β-ionone with various aldehydes to prepare a series of chalcones. Chalcones are plant-derived ketones composed of two aromatic rings that possess anticancer and antimicrobial activity. All derivatives inhibited the proliferation of various cancer cell lines including prostate, breast, CNS, cervix and liver. Compound (a) in Figure 3 was more effective in inhibiting cell proliferation compared to other derivatives. It was noticed that compounds having electron-withdrawing group on the para position of the ring moiety were more cytotoxic than compounds with electron-donating group in the ortho position. Further studies using Chinese hamster ovary cells, showed that compound (a) caused cytotoxicity via induction of apoptosis and cell cycle arrest at G0 phase [45].

Zhou et al. designed a variety of β-ionone-based chalcones; they exhibited various level of cytotoxic effect on a variety of prostate cancer cell lines, including LNCaP, MDA-PCa-2b, 22Rv1, C4-2B and PC-3. It is believed that compounds with an electron withdrawing group at the meta position of the ring moiety are more potent than compound with an electron donating group at the para position. Compound (b) in Figure 3 was found to induce the strongest cytotoxic effect in androgen dependent and independent prostate cancer cells even in comparison to β-ionone in the context of LNCaP and PC-3 cells. Furthermore, compound (b) was found to elicit anti-androgenic activity; as it inhibited the DHT-induced transactivation of wild type AR and various mutated ARs [46].

Zhou later synthesized a variety of β-ionone-based compounds; the compound shown in Figure 4 and compound (a) in Figure 5 were the most potent inhibitors of the proliferation of various prostate cancer cells (including LNCaP, MDA-PCa-2b, C4-2B and 22Rv1). In addition, these compounds acted as full antagonists of the wild type AR and a variety of clinically important mutated ARs in PC-3 cells [47][48]. Molecular modeling revealed that the two bulky side-chains of compound (a) in Figure 5 are critical for mutated AR antagonism. On the other hand, compound (a) elicited cytotoxic activity against PC-3 cells, which lack AR, suggesting that compound is not only targeting AR [47]. Further investigations revealed that the compounds in Figure 4 and Figure 5 inhibited NF-KB activation and interleukin-6 (IL-6) release. Compound (b) in Figure 5, a derivatives of the compound in Figure 4, also suppressed prostate tumor cell proliferation (C4-2B, 22Rv1, PC-3 and DU-145 cells), AR and NF-κB signaling. In addition, compound (b) resulted in apoptosis as it caused caspase 3 activation in LNCaP cells [49].

Balbi and co-workers synthesized heterocyclic ionone-like derivatives. However, they focused on α-ionone derivatives, as they were easier to synthesize. Almost half of the synthesized compounds inhibited superoxide anion production in neutrophils in a dose-dependent manner, in which compounds (a) and (b) (Figure 6) were found to be most active. These two compounds also inhibited the chemotactic response of neutrophils in a dose dependent manner. It was found that these derivatives inhibited neutrophil chemotaxis at lower concentrations compared to nonsteroidal anti-inflammatory drugs. It was noticed that a pyrazole ring and its substitution at position 1 seems to be very important for activity whereas an unsubstituted pyrazole (compound (a)) or an aminotriazole (compound (b)) substituent elicited the highest activity [50].

In addition, a collection of β-ionone-derived curcumin analogs inhibited the secretion of pro-inflammatory cytokines including TNF-α and IL-6, following LPS stimulation in a dose dependent manner. These analogs were found to be more potent than curcumin. The most active compound (c) (Figure 3) inhibited LPS-induced septic death in mice. The study showed that having any substituent at the second position of the phenyl group resulted in normal activity against inflammatory cells while a substituent at fourth position of the phenyl group reduced the activity of the compounds. In addition, it showed that having chloro group substituents at the third and fourth position of the phenyl group displayed normal activity against inflammatory cells however replacing the chloro groups with methyl groups almost abolished this activity [51]. 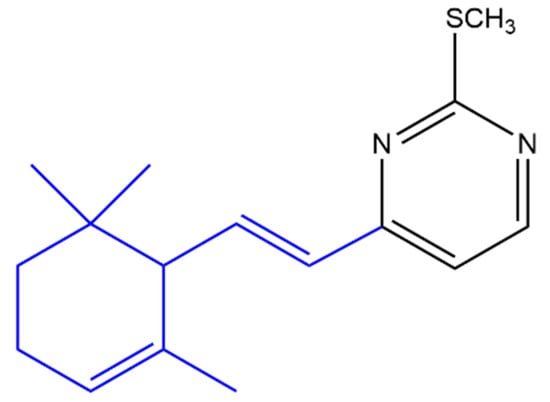 Sharma and his team combined β-ionone with various aldehydes to prepare a series of chalcones. The active compounds exhibited promising antimicrobial activity against a variety of Gram negative bacteria (E. coli, P. aeruginosa, Salmonella typhimurium), Gram positive bacteria (S. aureus, Bacillus subtilis) and fungal strains (A. niger, Saccharomyces cerevisiae, C. albicans). In addition, further testing showed that some of the active compounds were also active against methicillin resistant S. aureus. Compound (d) in Figure 3 displayed the highest anti-bacterial activity against both Gram negative and positive bacteria while compound (e) showed the uppermost antifungal activity against species including A. niger and S. cerevisiae. It was noticed that compounds with electron withdrawing substituents on the aromatic ring mostly displayed better antibacterial activity in comparison to compounds with electron releasing groups [53].

Suryawanshi and his team synthesized several terpenyl pyrimidines substituted with 4-N in which the starting material (ketene dithioacetal) was made available from β-ionone. The 4-thiomethoxy substituted pyrimidine (Figure 9) caused 66% in vivo inhibition of Leishmania donovani in hamsters. It was noticed that the 4-thiomethoxy group is very important for the anti-leishmanial activity as its replacement with various primary and secondary amines resulted in activity loss [55].