1. MafA and PDX-1 Play a Crucial Role in Pancreatic β-Cells

Under healthy conditions, pancreatic β-cells function to produce and secrete the insulin hormone in response to high glucose concentrations. Under diabetic conditions, however, β-cells are compelled to secrete larger amounts of insulin continuously in order to reduce blood glucose levels. Such succession is some grueling work for β-cells themselves, and thereby, the β-cell function is debilitated in the long run (so called “pancreatic β-cell glucose toxicity”) [1][2][3]. Chronic hyperglycemia reduces insulin biosynthesis and secretion together with reduced expression of insulin gene transcription factors such as MafA and PDX-1. In clinical practice, it is very important to alleviate such β-cell glucose toxicity so that the aggravation of diabetes mellitus is forestalled. In addition, insulin signaling in insulin target tissues (liver, skeletal muscle, and adipose tissue) is weakened by the burden of glucose toxicity, leading to the development of insulin resistance. Such debilitation of the β-cell function and development of insulin resistance lead to further aggravation of type 2 diabetes mellitus (Figure 1).

MafA is a strong transcription factor for the insulin gene [4][5][6][7][8][9][10][11][12][13][14][15][16][17][18][19]. In MafA knockout mice, insulin biosynthesis and secretion are reduced, leading to diabetes mellitus, indicating the importance of MafA in β-cells [8]. The MafA expression level is markedly reduced in a diabetic state [11], but it is preserved after alleviation of glucose toxicity with some anti-diabetic agent [16][17][18][19]. Furthermore, we reported that in β-cell-specific and conditional (tamoxifen-induced) MafA overexpressing transgenic db/db mice, serum insulin levels were higher and blood glucose levels were lower compared to their littermates. In addition, the β-cell mass was preserved in MafA overexpressing db/db mice mainly due to the reduction of apoptotic cell death. We think that these findings clearly underscore the importance of MafA in β-cells and become unequivocal evidence that downregulation of MafA expression is associated with β-cell glucose toxicity (Figure 1).

PDX-1, another important transcription factor for the insulin gene, plays a crucial role in pancreas development and β-cell differentiation and maintenance of mature β-cell function [20][21][22][23][24][25][26][27][28][29][30][31]. In PDX-1 knockout mice, pancreas formation is not observed at all [23]. In mature β-cells, PDX-1 transactivates several genes including insulin, glucokinase, and glut2. However, the expression level of PDX-1 is reduced in a diabetic state [26][29], which we think is associated with β-cell failure observed in diabetes. Indeed, we recently reported that β-cell-specific and conditional (tamoxifen-induced) PDX-1 overexpressing transgenic Akita mice showed lower blood glucose levels and lower HbA1C values compared to their littermates, accompanied by increased insulin secretion after glucose loading [31]. Expression levels of MafA and glucokinase were preserved in PDX-1 overexpressing Akita mice. We think that such new findings suggest that the downregulation of PDX-1 expression found in diabetes undermines insulin biosynthesis and secretion which explains, at least in part, the mechanism for β-cell glucose toxicity (Figure 1).

In response to the ingestion of food, glucagon-like peptide-1 (GLP-1) and glucose-dependent insulinotropic polypeptide (GIP) are released from the gastrointestinal tract both of which stimulate insulin secretion. GLP-1 and GIP bind to the GLP-1 and GIP receptor in β-cells, respectively, which increases intracellular cAMP levels. Increased cAMP levels lead to augmenting insulin secretion, reducing β-cell apoptosis, and facilitating β-cell proliferation (Figure 2). Incretin-related drugs such as glucagon-like peptide-1 receptor (GLP-1R) activators or dipeptidyl peptidase-IV (DPP-IV) inhibitors are known to ameliorate glycemic control and reduce the progression of β-cell dysfunction in human subjects, as well as rodent models [32][33][34][35]. Indeed, it was reported that the GLP-1 receptor activator liraglutide preserved pancreatic β-cell function through the reduction of glucose toxicity, as well as through its direct effect on β-cells [32][35]. The DPP-IV inhibitor suppresses the activity of DPP-IV, which is a splitting enzyme of incretin and increases serum levels of GLP-1 and GIP. Both incretins stimulate insulin secretion in a glucose-dependent manner and GLP-1 suppresses glucagon secretion. Indeed, it has been reported that DPP-IV inhibitors preserve pancreatic β-cell function through the reduction of glucose toxicity, as well as through the direct protective effect of incretin [33][34].

3. Incretin Receptor Expression in β-Cells Is Downregulated under Diabetic Conditions: Incretin-Based Agents Exert More Protective Effects on β-Cells at an Early Stage of Diabetes rather than an Advanced Stage

It is well known that the incretin hormone action is significantly reduced in subjects with type 2 diabetes mellitus. Moreover, it has been reported that expression levels of incretin receptors are decreased in a diabetic state, which is likely involved in the impaired incretin effects and the progression of β-cell failure found in diabetes  [16][36][37][38](Figure 2). In addition, it has been suggested that the decreased expression of transcription factor 7-like 2 (TCF7L2), which is a transcription factor of incretin receptors and plays a crucial role in the maintenance of β-cell function, is involved in the downregulation of the incretin receptor expression in β-cells found in diabetes [39] [40][41].

In general, the main insulin target tissues are the liver, skeletal muscle, and adipose tissues, but there are many kinds of tissues and/or cells in which insulin signaling plays some important role. In endothelial cells, binding of insulin to insulin receptor on its cell surface activates insulin receptor substrate (IRS), phosphoinositide 3-kinase (PI3K), and 3-phosphoinositide-dependent protein kinase-1 (PDK1). Such activated insulin signaling leads to augment nitric oxide production in endothelial cells. Indeed, there have been several reports showing the importance of insulin signaling in endothelial cells [42][43][44][45][46]. Since it is known that the endothelial cell dysfunction is observed under diabetic conditions, it is possible that such endothelial dysfunction brings out hypoxia and ischemia in various tissues through insufficiency of nitric oxide production. In addition, it is known that pancreatic islets are particularly vulnerable to various stimuli including hypoxia and ischemia, and thereby it is also possible that endothelial dysfunction leads to exacerbation of pancreatic β-cell function. 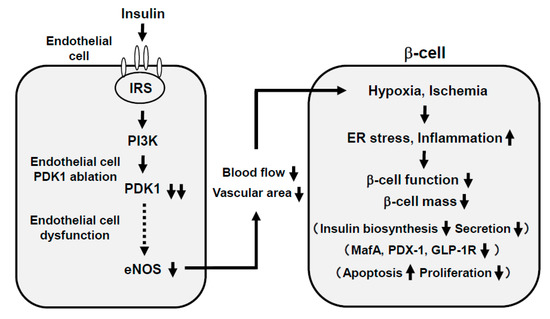 Figure 3. Association of endothelial cell dysfunction with pancreatic β-cell dysfunction: Involvement of hypoxia, provoked endoplasmic reticulum (ER) stress, and inflammatory reaction. Ablation of endothelial PDK1 reduces vascularity in islets, and both pancreatic and islet blood flow are decreased, which lead to hypoxia in islets and induction of ER stress and inflammation. Therefore, it is likely that vascular endothelial PDK1 plays an important role in the maintenance of pancreatic β-cell mass and function by maintaining the vascularity of the pancreas and islets and protecting them from hypoxia, ER stress, and inflammation.

Taken together, ablation of endothelial PDK1 reduces vascularity in islets, and both pancreatic and islet blood flow are decreased, which lead to hypoxia in islets and induction of ER stress and inflammation. Therefore, it is likely that vascular endothelial PDK1 plays an important role in the maintenance of pancreatic β-cell mass and function by maintaining the vascularity of the pancreas and islets and protecting them from hypoxia, hypoxia-related ER stress, and inflammation. These are novel concepts to explain the underlying molecular mechanism for pancreatic β-cell failure and we think that such findings would be useful when we think about future strategies for type 2 diabetes mellitus (Figure 3).