K. pneumoniae is a significant opportunistic pathogen, mainly associated with hospital-acquired infections [1]. Studies have estimated that it causes 8% of all nosocomial bacterial infections in Europe and in the United States [2][3]. This bacterium is responsible for a broad spectrum of extraintestinal diseases such as sepsis, pneumonia, urinary tract, lungs, abdominal cavity and soft tissue infections [4]. K. pneumoniae has important virulence factors, such as lipopolysaccharides, a capsule, adhesins and siderophores, required for its mechanism of colonization, adherence, invasion and to enable the progression of infection [2][5]. In addition, hemolysins, tyrosine kinase, heat-stable enterotoxins and heat-labile exotoxins participate in the pathogenicity [6][7]. K. pneumoniae rapidly acquires antibiotic resistance mechanisms making the selection of the appropriate antibiotic treatment more challenging [1][8]. Carbapenem resistance appears to have the greatest impact on the effectiveness of the treatment. The European Centre for Disease Control and Prevention (ECDCP) assumed that 15.2% of K. pneumoniae strains are carbapenem resistant in Italy [9][10]. In this scenario, nosocomial K. pneumoniae infections reflect a 50% mortality rate if untreated [11][12]. Given the clinical significance of this pathogen, a better understanding of other mechanisms of virulence is fundamental for designing new strategies to treat Klebsiella infections. It is well established that one of the characteristics of Gram-negative bacteria is their ability to form vesicles from the outer membrane, called outer-membrane vesicles (OMVs) [13][14][15]. OMVs are lipid bilayer spherical nanostructures with a diameter of 20–250 nm that are released into the host environment [16][17][18]. The surface of these vesicles is composed of lipopolysaccharide (LPS), phospholipids and outer membrane proteins [19][20]. The vesicular lumen, however, contains periplasmic and cytoplasmic components, including genetic material and virulence factors, such as invasion associated factors, toxins, and immune response modulators [21][22][23]. Thermolabile toxins and cytolysin have been identified in OMVs produced by Escherichia coli [24][25][26]. Haemolytic phospholipase C and alkaline phosphates have been detected in the OMVs of Pseudomonas aeruginosa [27][28][29]. Keenan et al. have found vacuolating cytotoxin A in the OMVs produced by Helicobacter pylori [18][30][31]. Since OMVs consist of toxins and several virulence determinants, it was postulated that the vesicles play a crucial role in bacteria–host interactions [32]. Previously, we demonstrated that OMVs of K. pneumoniae induce a strong inflammatory response in human bronchial epithelial cells (BEAS-2B) [13][14][15]. In these cells, OMVs strongly upregulate the expression of genes, encoding cytokines and chemokines [32]. In addition, the effect of the inflammatory cascade leads to pathogen clearance and host homeostasis [33][34][35]. Therefore, understanding cellular and molecular factors in response to the exposure of OMVs could be highly relevant for susceptibility to infection.

MicroRNAs (miRNAs) are small non-coding RNA molecules that are involved in the post-transcriptional regulation of gene expression [36][37]. These molecules are essential in different biological processes, such as development, proliferation, differentiation, cell death and disease [38]. In infected epithelial cells, downregulation of miRNAs increases the expression of cytokines, chemokines, adhesion factors and costimulatory molecules [39][40][41][42]. Little is known about the function of miRNAs in the human bronchial epithelial cells after OMV interaction.

In order to define the structural and functional characteristics of OMVs produced by K. pneumoniae, vesicles were purified from three different strains: K. pneumoniae ATCC 10031, MS K. pneumoniae (clinical isolate) and KPC-producing K. pneumoniae (clinical isolate). The strains were cultured to stationary phase and their OMVs were collected. To guarantee precise accuracy of the analyses, three independent purifications of the OMVs were performed for each strain. All vesicles were analysed in terms of diameter and size distribution, through DLS. DLS analysis showed that most OMVs of K. pneumoniae ATCC 10031 presented a diameter of 273.3 ± 1.3 nm and were characterized by a slightly heterogeneous size distribution, confirmed by the polydispersity index of 0.329 ± 0.021. OMV vesicles from isolated clinical strains showed an increase in size and a greater heterogeneity of vesicular populations. The OMVs of MS K. pneumoniae predominately exhibited a diameter of 427.1 ± 0.9 nm and the vesicle population showed a high heterogeneity, demonstrated by a polydispersity index of 0.417 ± 0.017. Similar results were obtained for OMVs produced by KPC-producing K. pneumoniae. The majority of these vesicles presented with a diameter of 483.3 ± 1.7 nm and a polydispersity index of 0.333 ± 0.132, suggesting a heterogeneous population in size distribution (Table 1). All purified OMVs were quantified based on protein yield. Protein concentrations of 0.08 ± 0.06 mg/mL, 0.14 ± 0.03 mg/mL and 0.21 ± 0.01 mg/mL had been generated by K. pneumoniae ATCC 10031, MS K. pneumoniae and KPC-producing K. pneumoniae, respectively, for 600 mL of LB culture (Table 2).

3. SDS-PAGE and LC-MS/MS Analysis of OMVs 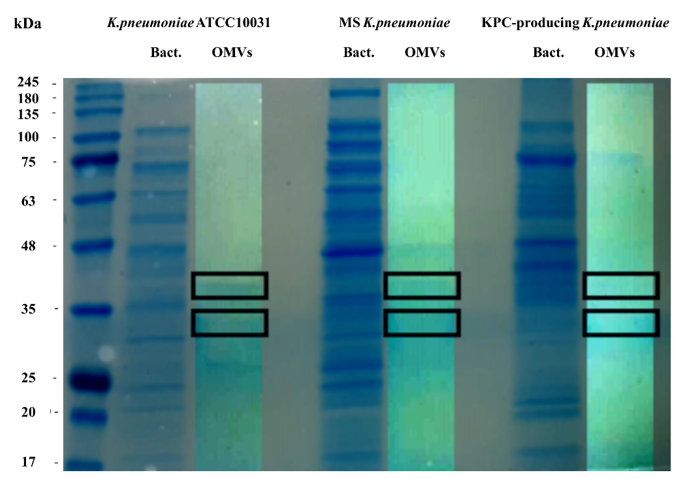 The evaluation of the expression profiles of miRNAs was carried out after treating BEAS 2B cells with OMVs purified from K. pneumoniae ATCC 10031, MS K. pneumoniae and KPC-producing K. pneumoniae. Using the TaqMan miRNA Array CARD, we screened the expression level of 384 miRNA sequences [43]. Raw microarray data were filtered and analysed. To give an illustrative and informative depiction, the results are shown via heatmap, using MeV software (MultiExperiment Viewer) (Figure 2). Transcripts with upregulated expression are indicated in red, while downregulated transcripts are indicated in green. In particular, the analysis revealed 115 miRNA sequences that were differentially regulated in treated samples compared to untreated controls (p < 0.05; cut-off > 1.5 or < −0.5). K. pneumoniae ATCC 10031 derived OMVs induced the upregulation of 81 and downregulation of 13 miRNAs. In cells treated with MS K. pneumoniae derived OMVs, 57 miRNAs were upregulated and 16 were downregulated. Incubation with KPC-producing K. pneumoniae derived OMVs altered the expression of 71 miRNAs (58 upregulated and 13 downregulated). The differential analysis of miRNome profiling in response to each of the three treatments was compared and shown in the Venn diagram in Figure 3. The dysregulated miRNAs were common to all the three samples and the individually dysregulated miRNAs in each sample were used for gene ontology, biological function, and pathway analysis. 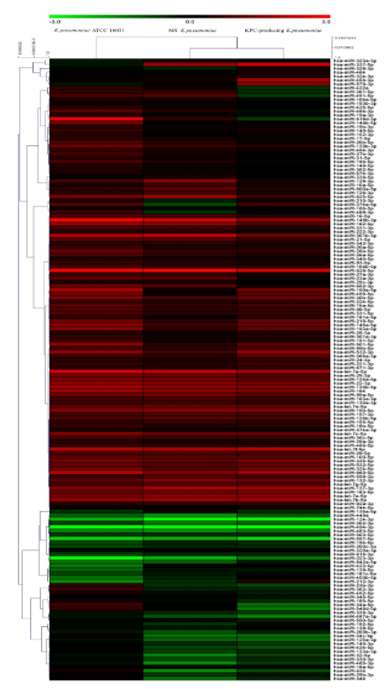 Figure 2. Heat map and hierarchical analysis of clusters. Heat map based on microarray results filtered and processed by bioinformatics analysis. Red indicates a greater expression than the control and green indicates a lower expression. Figure 3. Venn diagram of differentially expressed miRNAs in three samples. The Venn diagram shows the different expressions of miRNAs after exposure of BEAS-2B cells to OMVs purified from three different strains of K. pneumoniae (ATCC 10031, MS and KPC-producing) compared to the control sample. The numbers in the intersecting circles represent the miRNA sequences commonly dysregulated in the different samples. 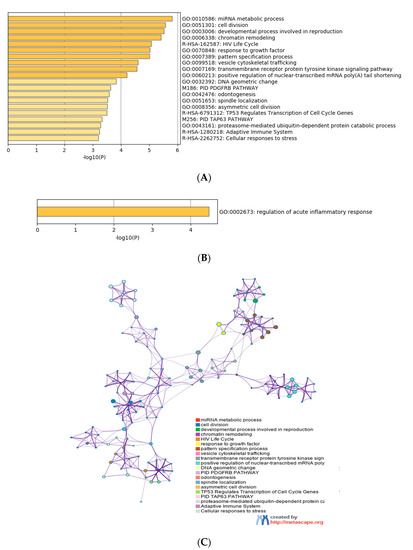 Figure 4. Analysis of the functional enrichment of target genes. (A, B) The main enrichment analysis clusters detected by Metascape of genes associated with upregulated miRNA after treatment with OMVs; (C) interaction network of the clusters detected by Metascape. The nodes of the same colour belong to the same cluster. Terms with a similarity score > 0.3 are linked by an edge. The network is visualized with Cytoscape (v3.1.2) with a “force-directed” layout and edge bundled for clarity. 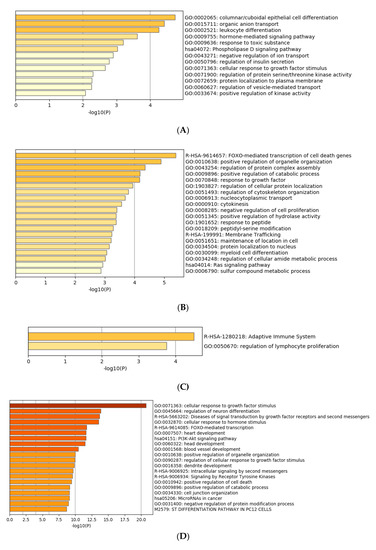 RT-qPCR was used to confirm the gene expression results obtained from microarray analysis. Four miRNAs (hsa-miR-223, hsa-miR-21, hsa-miR-25, hsa-let-7g) were selected for validation. The expression of the analysed miRNAs showed a good compliance with microarray data (Figure 6). These findings suggest that the microarray data were reliable, supported by similar fold changes. The expression levels in the miRNAs hsa-miR-223, hsa-miR-21 and hsa-let-7g were significantly higher in the treatment with KPC-producing K. pneumoniae OMVs. In contrast, the OMVs from MS strain induced higher expression levels than OMVs from ATCC 10031 strain. For hsa-miR-25, there were no significant variations in expression between treatment with OMVs derived from KPC-producing K. pneumoniae and MS strain.