Premature termination codons (PTCs) are stop codons arising from nonsense variants converting a sense codon into a termination signal, i.e. UAA, UAG or UGA. PTCs arising from mutations may, at low frequency, be misrecognized and result in PTC suppression, named ribosome readthrough, with production of full-length proteins through the insertion of a subset of amino acids. Since some drugs have been identified as readthrough inducers, this fidelity drawback has been explored as a therapeutic approach in several models of human diseases caused by nonsense mutations.

The translation of mRNA is a ribosome-catalyzed process leading to the synthesis of a polypeptide chain driven by the correct base pairing between mRNA codons and aminoacyl-tRNAs (aa-tRNAs) anticodons [1][2]. This biological event consists of three main phases, namely initiation, elongation, and termination.

In the first phases of the translation process, interaction among mRNA, the initiator tRNA (placed in the ribosome P site), translation initiation factors, and the small ribosome subunit leads to the recruitment of the large subunit and formation of the initiation complex. Then, a process of aa-tRNA sampling occurs at each mRNA codon during the elongation phase. Each aa-tRNA enters the ribosomal A site as a ternary complex with a GTPase elongation factor (EF-Tu in prokaryotes and eEF1A in eukaryotes) and a GTP molecule. During this phase, the ribosome discriminates with high fidelity the cognate from non-cognate or near-cognate ternary complexes through two strategies, namely initial selection and proofreading. Both steps, separated by the irreversible hydrolysis of GTP, rely on the different stability of codon-anticodon matches [3][4] (Figure 1).

Initial selection allows for an efficient rejection of non-cognate aa-tRNAs on the basis of two out of three mismatches in the codon-anticodon duplexes, which leads to the dissociation of the incorrect aa-tRNA ternary complex with no costs in terms of GTP [5]. This kinetic mechanism alone is not enough to distinguish between cognate and near-cognate aa-tRNA complexes. Indeed, interactions of decoding center elements, located within the prokaryotic (16S) or eukaryotic (18S) rRNA, with both mRNA codon and tRNA anticodon are necessary to increase ribosome accuracy [6][7]. The ribosome fidelity during translation has been described in prokaryotes, but it is similar in eukaryotes. In particular, when a ternary complex enters the ribosomal A site, the binding of a cognate aa-tRNA anticodon to a mRNA codon induces two conserved adenines, A1492 and A1493 (prokaryote numbering), to flip out of an internal loop of helix 44 in 16S rRNA. Moreover, also the universally conserved G530 switches from the syn to the anti-conformation. This new arrangement enables the two key adenines to interact through hydrogen bonds with the first and second base pairs of the codon-anticodon helix, while the G530 interacts with the second anticodon position and the third codon position. As a result, the induced changes lead to the discrimination between correct Watson–Crick geometry, due to standard base pairing, at the first and second codon positions, whereas the third “wobble” base pair may accommodate other non-standard geometries [1][8]. Therefore, the recognition of the cognate aa-tRNA causes a local conformational change in the decoding site eliciting a transition from an open to a closed form of the small ribosomal subunit ensuring the subsequent hydrolysis of GTP [9]. Although it has been defined how recognition of a cognate aa-tRNA occurs, it is still unclear what the entry of near cognate aa-tRNA in ribosomal A site entails. One hypothesis is that the decoding site does not sense a correct Watson–Crick codon-anticodon base pairing, with the lack of stabilization for the near-cognate complex and its preferential rejection. Furthermore, structural studies reveal that binding of a near-cognate aa-tRNA does not induce the closed conformation of the small subunit, which rather remains in an open or partially-closed conformation [10]. However, it seems quite clear that a near-cognate aa-tRNA escapes from the initial selection step when a mismatch in the codon-anticodon helix mimics a Watson–Crick geometry [11][12][13].

Figure 1. Initial selection and proofreading activity of the translating ribosome. The insertion of cognate or near-cognate, as well as the rejection of non-cognate, aa-tRNAs is exerted by the ribosome during the initial selection step (left panel, with codon-anticodon interactions depicted in the boxes below). Upon GTP hydrolysis, the cognate aa-tRNA is efficiently accommodated, with formation of peptide bond and progression of protein synthesis with a new aa-tRNA selection step (right panel, upper part). The presence of a near-cognate aa-tRNA, which fails to be accommodated, results in rejection of the aa-tRNA through a proofreading step (right panel, lower part).

After codon recognition, which leads to the closed conformation of the small ribosomal subunit, a series of rearrangements occur in the aa-tRNA, leading to activation of the elongation factor GTPase. The hydrolysis of GTP consists of the docking of the elongation factor GTPase into the sarcin-ricin loop (SRL) within the large ribosomal subunit [8]. It has been demonstrated that, through local conformational changes in the small ribosomal subunit, the binding of a cognate aa-tRNA accelerates GTP hydrolysis in comparison with a near-cognate aa-tRNA [14][15]. Following the detachment of the GDP-bound elongation factor, an accommodation step of the aa-tRNA takes place, the mechanism of which can explain how the aa-tRNA proofreading occurs. The aa-tRNA moves into the peptidyl-transferase center, located within the large ribosomal subunit, through reversible fluctuations of its elbow region, acceptor arm and 3′CCA end from A to P site [15][16]. It seems that a cognate aa-tRNA accommodates more rapidly than a near-cognate aa-tRNA due to a more stable codon-anticodon base pairing during the proofreading step. On the other hand, unfavorable Watson–Crick geometry and weak codon-anticodon interactions probably facilitate rejection of a near-cognate aa-tRNA, which circumvented the initial selection step [12][17]. Overall, ribosome fidelity strategies strictly monitor the aa-tRNA selection during the translation process.

The final phase, translation termination, is triggered when a stop codon (UAA, UAG, UGA) enters the ribosomal A site [18][19]. In general, extra-ribosomal proteins, named release factors (RFs), are recruited to promote the release of the nascent polypeptide [20]. In eukaryotes, an essential role is played by the two main effectors eRF1 and eRF3. The eRF1 protein consists of three domains, namely an N-terminal domain directly recognizing all stop codons, a middle domain containing a conserved GGQ (Gly-Gly-Gln) motif involved into stimulation of polypeptide chain hydrolysis, and a C-terminal domain that binds eRF3 [21]. The second release factor, eRF3, consists of different domains, among which the most relevant is the G domain, which binds GTP and assists the termination process through GTP hydrolysis [22]. Similarly to the elongation phase, when a stop codon enters the ribosomal A site, a process of aa-tRNA ternary complex sampling occurs. At the same time another ternary complex, composed of eRF1, eRF3, and GTP, competes for stop codons recognition [23], driven by the N-terminal domain of eRF1 that establishes multiple contacts with the 40S subunit. The key step of GTP hydrolysis, prevented by the middle domain of eRF1 during formation of the pre-termination complex, is triggered by interactions involving eRF3 and the SRL [24]. Upon GTP hydrolysis, the positioning of eRF1 GGQ motif into the peptidyl transferase center stimulates the hydrolysis of the ester bond between tRNA and the polypeptide chain [25].

A relevant detrimental effect on protein synthesis may be exerted by nonsense mutations, which account for 11% of all gene alterations responsible for inherited human genetic diseases [26]. Nonsense mutations are defined as single-base pair substitutions affecting gene coding regions, which convert an mRNA sense codon into an in-frame premature termination codon (PTC). The impairment of gene expression due to PTC-containing transcripts is related to (i) the degradation of truncated proteins, with decreased stability or loss-of-function features, resulting from premature termination of translation, or (ii) the reduction in the steady-state level of cytoplasmic mRNA by the nonsense-mediated mRNA decay (NMD) quality control system [27][28][29]. However, it has been demonstrated that 5–25% of aberrant mRNAs might escape NMD, thus producing a truncated protein that, in autosomal disorders, might interfere with the wild-type protein function and give rise to dominant-negative effects [30].

In particular, the NMD mechanism degrades PTC-bearing transcripts through the interplay of cis and trans factors. The first signal is provided by the exon junction complexes (EJCs), a multiprotein set deposited ∼20–24 nucleotides upstream of each exon-exon junction as a marker of the occurrence of splicing events [31][32][33]. It has been shown that PTC-bearing mRNAs bound to the cap-binding complex (CBC, consisting of CBP80-CBP20) can be recognized as NMD substrates during the so-called pioneer round of translation, namely a first translational cycle in which the ribosome performs an mRNA scan. During the pioneer round of translation, if the stop codon is located at the 3′ of the coding region, typical of natural stop signals, the ribosome displaces all EJCs, which allows the subsequent replacement of CBC with eIF4E and makes the mRNA immune to NMD. Conversely, if the transcript harbors a PTC, causing ribosome stalling, the NMD pathway is engaged due to the presence of downstream EJCs that cannot be removed [34]. Accordingly, immuno-purification studies showed that eIF4E-bound mRNAs were not associated with factors required for NMD, thus supporting that NMD takes place during the pioneer round of translation [35] (Figure 2).

Among the proteins involved in mRNA decay, the major orchestrator is Upf1, an ATP-dependent RNA helicase that is recruited on the PTC together with eRF1, eRF3, and SMG1 (phosphatidylinositol 3-kinase-related protein kinase) in the so-called SURF (SMG1-Upf1-eRF1-eRF3) complex [36]. Other components are required for the NMD activation, such as Upf3 or 3X, which are generally associated with EJCs in the nucleus, and Upf2, which is assembled to EJCs after mRNA export to the cytoplasm [35][37][38]. Once the PTC-bearing transcript is identified by the NMD machinery, several rearrangements and conformational changes occur, including the Upf1-mediated formation of the decay-inducing complex formation (DECID) [39][40], which leads to degradation of the tagged mRNA in a process driven by phosphorylated Upf1 [41][42]. Finally, the NMD factors are disassembled by Upf1, which in turn is converted to its unphosphorylated form [43]. 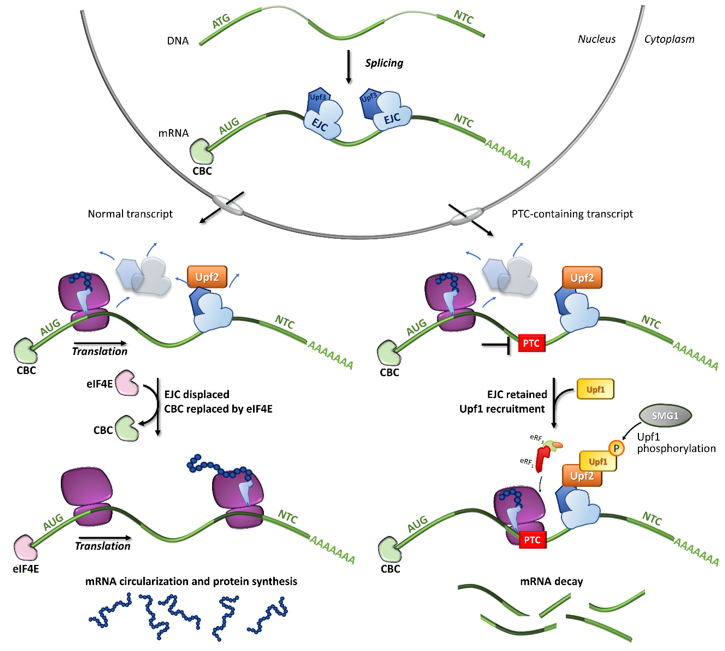 Figure 2. Fates of normal or PTC-bearing mRNA transcripts during the first step of translation. The splicing of pre-mRNA into the nucleus results in a mature mRNA transcript bound to exon-junction complexes (EJCs) as well as other key components such as the Upf3 (in the nucleus) and Upf2 (in the cytoplasm) proteins. Once transported into the cytoplasm, the mRNA undergoes a first (pioneer) round of translation. In normal conditions, the ribosome displaces all EJCs, resulting in the replacement of CBC with eIF4E, mRNA circularization and protein synthesis, which proceeds until the natural termination codon (NTC) is reached. If a premature termination codon (PTC) is present, EJCs are not efficiently removed by the ribosome, resulting in recruitment of eRF1, eRF3, Upf1 and the SMG1 kinase, which leads to Upf1 phosphorylation and degradation of the UPF1-tagged mRNA.