Fruit set is the earliest phase of fruit growth and represents the onset of ovary growth after successful fertilization. Environmental conditions can negatively affect fruit set and final productivity. In parthenocarpy, fruit formation is less affected by environmental factors because it occurs in the absence of pollination and fertilization, making parthenocarpy a highly desired agronomic trait. Elucidating the genetic program controlling parthenocarpy, and more generally fruit set, may have important implications in agriculture, considering the need for crops to be adaptable to climate changes. Several phytohormones play an important role in the transition from flower to fruit. Further complexity emerges from functional analysis of floral homeotic genes. Some homeotic MADS-box genes are implicated in fruit growth and development, displaying an expression pattern commonly observed for ovary growth repressors.

Tomato is one of the most important crops worldwide cultivated for the nutritional value of its fruit, which is a source of health-promoting compounds such as vitamins, carotenoids, phenolic compounds, and small peptides [1]. Furthermore, tomato has been adopted as an experimental model for studying fleshy fruit growth, development, and ripening. Botanically, the tomato fruit that originates from the ovary, the expanded basal portion of the pistil, is a berry composed of pericarp derived from the ovary wall, the placenta, and the pulp containing seeds [2]. Shortly before flower anthesis, the growth of the unpollinated ovary is actively blocked by developmental repressors and cell division temporarily stops. The control on ovary quiescence in tomato and Arabidopsis is exerted at least in part by negative factors derived from the communication between the anthers and the ovary [3][4]. After successful completion of pollination and ovule fertilization, the coordinated action of growth signals acts in relieving the ovary growth repression [5][6]. The switch from the static condition of the unpollinated ovary to that of rapidly growing fruit after fertilization is called the fruit set phase, after which fruit growth occurs by cell division and cell expansion, until reaching the ripening stage. Auxins, gibberellins (GAs), cytokinins (CKs), abscisic acid (ABA), ethylene, and brassinosteroids (BRs) have been implicated in controlling different stages of fruit growth [1][7][8], with auxins and GAs being the crucial promoting hormones of fruit initiation [4][6][9][10]. MADS-box transcription factors have also emerged as one of the players recruited for the regulation of fruit set [11][12][13].

Fruit set is a very critical phase because it is more sensitive to endogenous and exogenous signals than later stages of growth [14]. Insufficient supply of nutrients, such as the phloem-imported sucrose, and adverse environmental conditions, such as drought or excessive/low temperatures, may impair the reproductive process, leading to the abortion of either flowers, seeds, or fruit with dramatic implications for fruit productivity [14][15]. The induction of parthenocarpy, which is the formation of seedless fruit in the absence of pollination and fertilization [3], could help prevent problems linked to low fruit yield under unfavorable conditions [9][16]. Parthenocarpy is generally the consequence of precocious activation of molecular events occurring normally upon pollination and fertilization. Some species or varieties (e.g., genetic mutants or plants with altered ploidy) have a natural capacity to produce parthenocarpic fruit [17][16]. In addition, parthenocarpy can be artificially obtained by applying synthetic growth factors to unpollinated ovaries or by genetic engineering [9].

Immediately after pollination and fertilization, auxin content (with indole-3-acetic acid—IAA—the major active auxin) increases within the ovary, activating the auxin signaling pathway that initiates fruit set. Auxin is perceived by its receptor, the TRANSPORT INHIBITOR RESPONSE 1 (TIR1), which is the F-box protein component of the E3 ubiquitin ligase complex, called Skp1/Cullin/F-box complex (SCFTIR1) [18]. Auxin acts as a “molecular glue”, stabilizing interaction between AtTIR1 and its target proteins AUXIN/INDOLE-3ACETIC ACID (Aux/IAAs), thus promoting ubiquitination and degradation of the Aux/IAAs through SCFTIR1 and the proteasome [19][20][21]. In this way, free AUX/IAA-AUXIN-RESPONSE FACTORs (ARFs) can activate auxin response gene expression [19][20][21]. Overexpression of SlTIR1 in tomato has resulted in several phenotypical modifications, including parthenocarpy [22]. The increased expression of SlTIR1 would promote the degradation of Aux/IAA repressors with the subsequent destabilization of the AUX/IAA-ARF inhibitory complex [22]. Members of the Aux/IAA and ARF transcription factors have been demonstrated to play a role in fruit set.

The review describes in details the studies in which parthenocarpy has been obtained by manipulating auxin action at different levels, by acting on its biosynthesis, signaling cascade, and transport, corroborating the crucial role played by this hormone in the control of fruit set.

Successful pollination and fertilization determine the increase of active GA content in the ovary, associated with augmented expression of GA biosynthetic enzymes, such as the GA 20-oxidase, and reduction in the expression of GA catabolic enzymes, such as GA 2-oxidase [6]. The overexpression of citrus GA biosynthetic gene GA 20-oxidase 1 (GA20ox1) in tomato induced parthenocarpic fruit growth linked to an increased content of GA4 [23]. The flowers of GA20ox1-overexpressing plants displayed alterations in pistil development with a long style protruding from the flower, thus preventing self-pollination at the stigma surface [23]. Silencing of the genes encoding for the GA inactivating enzyme, GA2-oxidase (GA2ox), which in tomato constitute a small multigenic family of five members, caused an accumulation of active GAs in the ovary and parthenocarpic fruit development [24]. As observed for auxin signaling, it was demonstrated that also the GA signal transduction pathway is blocked in the ovary before fertilization by the presence of a transcriptional repressor, a DELLA protein [25]. The release of DELLA repression in tomato obtained by RNA silencing, allowed parthenocarpic fruit growth [25]. Parthenocarpic DELLA-silenced fruit were smaller than wild-type, had an elongated morphology and a reduction in the pericarp cell number [25]. In fact, in SlDELLA-silenced parthenocarpic fruit, auxin-regulated cell division (phase II) is bypassed, while cell expansion phase III is activated [25]. Considering that manipulation of GA signaling leads to formation of parthenocarpic fruit elongated in shape and smaller than seeded fruit, whereas parthenocarpic fruit obtained by altering IAA signaling is generally similar in size and shape to seeded fruit [26][27][28], auxin has been recognized as an early signal acting upstream from GA responses in fruit initiation [5]. The crosstalk between auxin and GA signaling components in fruit set regulation has recently been demonstrated [29]. It was reported that SlARF7 can directly interact with both SlIAA9 and SlDELLA through distinct protein regions. SlDELLA and SlARF7/SlIAA9 play opposite roles in the feedback regulation of genes involved in GA and auxin metabolism. On the other hand, SlDELLA and SlARF7/SlIAA9 act additively in the regulation of ovary/fruit growth-related genes [29].

The role of these hormones in fruit set has been discussed in the review and their action has been schematically illustrated in the picture (Figure 1). 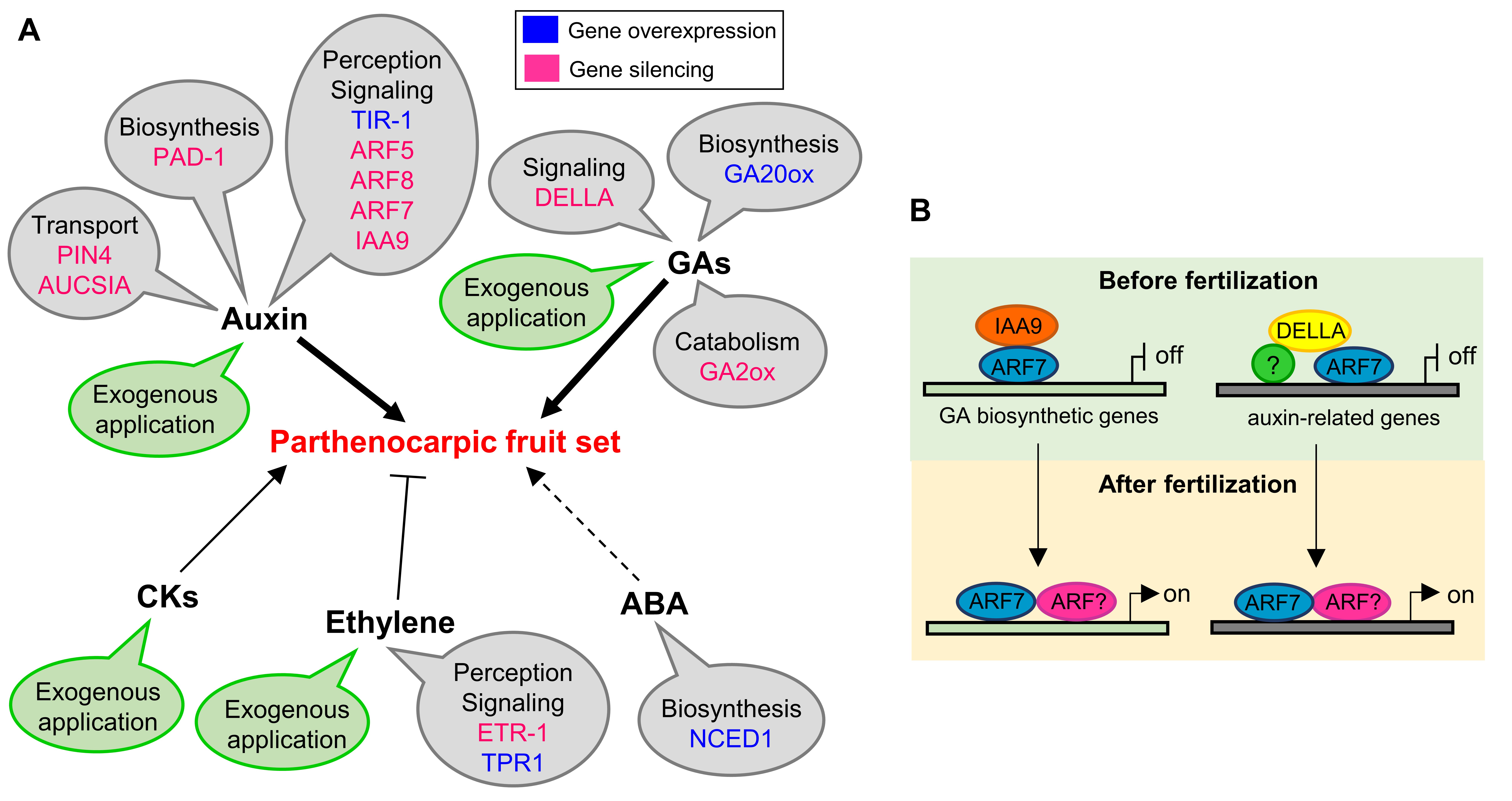 Early studies on genetic control of floral development in A. thaliana and A. majus led to the discovery that MADS-box transcription factors are key regulatory genes in defining the identity of floral organs [76,77]. The functions of these homeotic genes were generally elucidated through molecular analyses of mutant plants with aberrant flower development [78]. These seminal works led to the formulation of the ABC model of flower development, which identified the homeotic genes involved in determining the identity of the organs in the four concentric whorls of the flower: sepal, petal, stamen, and carpel. The original ABC model was successively modified including D and E homeotic genes and the interaction between ABCDE proteins was described in the floral quartet model [3]. The first approach used to elucidate flower development in tomato was the identification of the orthologs of A. thaliana and A. majus MADS-box genes and the subsequent analysis of the effects produced on flower structure by their downregulation or overexpression (see Table 1). For instance, a seminal study [79] described the effects of downregulation and the ectopic expression of Tomato Agamous 1 (TAG1), an ortholog of the C type Agamous gene of A. thaliana. The silencing of TAG1 gene, which is expressed in the third and fourth whorl, resulted in abnormal development of stamens and carpels as expected, while its ectopic expression besides modifying the identity of sepals, caused male and female sterility and production of parthenocarpic fruit [79]. On the other hand, studies on natural tomato parthenocarpic mutants demonstrated a link between the development of fruit in the absence of fertilization and flower homeotic modifications [90,91]. The important and complex role of members of different classes of MADS-box proteins in tomato fruit initiation has emerged in several later works (see Table 1).

Table 1. MADS-box genes involved in production of fruit in the absence of fertilization.

From all the studies described in the review, the involvement of MADS-box transcription factors in the regulation of fruit set and development appears to be evident, even if it is very difficult to place the information present in the literature in a clear picture. Seedlessness has been reported to occur both as a consequence of either suppression (AGL6, TM8, TM29, TAP3, SlGLO1, and SlGLO2) or ectopic overexpression (AGL11, TAG1, and TAGL1) of MADS-box genes. In the first case, the activity of the gene would directly or indirectly be linked either to the repression of fruit growth prior to fertilization or to maintenance of ovule or pollen viability. In the case of ectopic overexpression, parthenocarpy could represent a pleiotropic effect that highlights the need for strict spatial localization of MADS-box expression to avoid an untimely onset of ovary growth. It is interesting to note that in some cases, fruit seedlessness is accompanied by male sterility (TAG1, TAGL1, AGL11, TAP3, TM29, SlGLO1, and SlGLO2). It is known that early anther ablation can favour parthenocarpy, thus relieving the ovary growth repression probably by increasing GA concentration [34]. Another possible explanation is that the defective pollen fails to fertilize ovules but still produces some signals that induce fruit initiation. On the other hand, when parthenocarpy is obligatory, as in the case of TM29 downregulation, parthenocarpic trait is most likely linked to alteration in the female organ rather than pollen defects. The most interesting case of MADS-box-related parthenocarpy is that of AGL6 whose suppression results in facultative parthenocarpy, as the transgenic plants produce seeded fruit when pollinated and seedless fruit under unfavorable conditions. Both pollen and ovules are viable and no pleiotropic effects on reproductive or vegetative development, except parthenocarpy, are observed in the mutated plants [39]. The AGL6 mutation suggests that some MADS-box genes might have undergone sub functionalization, thus conserving only the activity as ovary growth regulator, while their function in flower organ identity would have been lost. It would be interesting to deepen the research of MADS-box genes in fruit set, identifying downstream targets and elucidating the relationship between hormone signaling and MADS-box activity. The observation that some elements of the genetic network controlling the formation of flower organs and gametogenesis might also be involved in the successive phases of fruit formation and growth, supports the idea that the two developmental programs are tightly connected.