The microbial and biochemical changes in different fermented foods due to the fermenting microorganisms. It has been a matter of study because it contributes to the enhancement of nutritional content in fermented foods due to various fermenting microorganisms that results in the modifications of foods ecosystems like on flavour, rheology, and shelf-life, as well as on the functional/nutritional characteristics of the foods. Fermentation technique has been used for centuries to upgrade food materials and to formulate a more acceptable product. It helps in the successful degradation of anti-nutritive compounds present in the fermented foods thus making it safe and consumable. This entry will help to know more about the potential of fermented foods to increase substantially the nutritional value of the world's most abundant food resources. The fermentation process has converted the unpalatable food materials into attractive and nutritious foods to add variety and flavour to monotonous staple dishes. It also enhances the nutritional value of foods in terms of vitamins, antioxidants, volatile compounds and minerals, etc. This entry may promote microbial and biochemical changes in fermented foods in a broad manner that helps to understand the overall beneficial effect of microorganisms on fermented foods.

Fermentation is a process that helps break down large organic molecules by the action of microorganisms into simpler ones. For example, yeast enzymes convert sugars and starches into alcohol, while proteins are converted to peptides/amino acids. The microbial or enzymatic actions on food ingredients tend to ferment food, leading to desirable biochemical changes responsible for the significant modification to the food. Fermentation is a natural way of improving vitamins, essential amino acids, anti-nutrients, proteins, food appearance, flavors and enhanced aroma. Fermentation also helps in the reduction of the energy needed for cooking as well as it makes a safer product [1][2]. Therefore, microorganisms' activity plays a significant role in the fermentation of foods by showing changes in the foods' chemical and physical properties. Fermented foods have several advantages [3][4]: 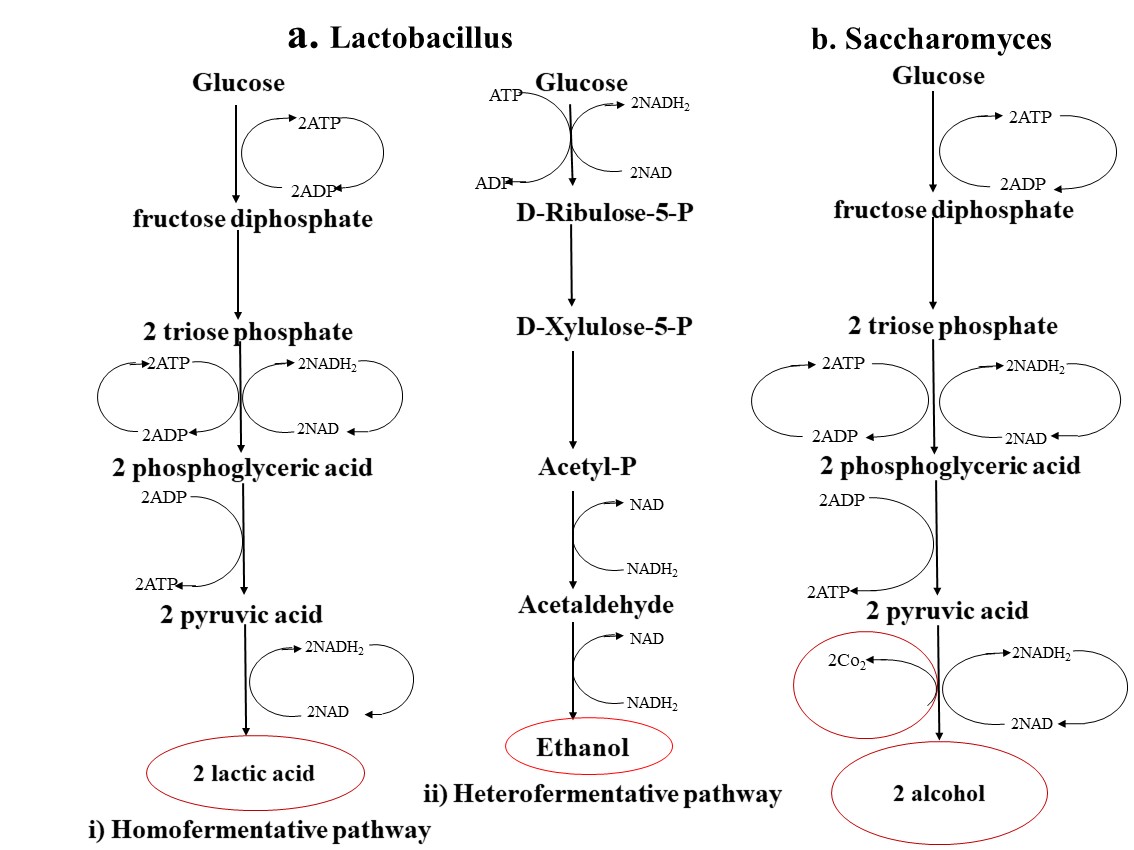 Figure 1. Sugar metabolism by Lactobacillus and Saccharomyces as representatives of L.A.B. and yeasts [11][12].

Table 1. Some of the most commonly prepared fermented foods/beverages with their fermenting microorganisms.

The essential factors in lactic acid fermentation are time, temperature, and relative humidity; for example, higher water activity (aw) and temperature aids in faster growth of L.A.B. and reducing the pH level. Smoke can contribute thousands of aroma and antimicrobial compounds such as organic acids (e.g., acetic, formic, butyric, isobutyric, and propionic acids), carbonyls, and phenols (antioxidants), contributing to the coagulation of surface proteins and inhibition of microorganisms [13].

The pH change is determined by the conversion of ammonia and lactate into lactic acid. This formation is done by adding carbohydrates produced from glycerol fermentation by bacteria and ammonia generated from amino acid fermentation. Acetic acid is also formed in this process of fermentation. Also, oxygen utilized through the metabolism process and other conditions influence the type of microorganisms and their metabolism, which affects the number of fermented carbohydrates and the production of lactose [14].

Cathepsin D (muscle's endogenous enzyme) breaks down myofibrillar proteins into polypeptides with low pH. Protein proteolysis produces volatiles and non-volatiles flavors in fermented sausages resulting in free amino acids and peptides. Based on the literature cited by Fadda et al, breakdown of flavor - and aroma producing compounds like myofibrillar and sarcoplasmic proteins is done with the help of L. plantarum and L. casei. For the development of the structure of fermented sausages, these myofibrillar proteins are more critical than sarcoplasmic proteins [15].

In fermented meat products, lipolysis is caused by microbial enzymes of muscle tissues, i.e., both endo- and exoenzymes, and oxidation of fatty acids results in the formation of alkanes, aldehydes, ketones, and alcohols [16].

Hydrolytic and oxidative changes, usually related to unsaturated fats and are autocatalytic, are responsible for the liberation of aromas and flavors (both good and bad flavors). There is a slight increase in thiobarbituric acid reactive substances (T.B.A.R.S.) in non-vacuum, whereas it remains stationary in vacuum packages. Lipolytic enzymes naturally present in meat are responsible for releasing fatty acids, and in semi-dry fully cooked products, the activity is minimal. Smoking and mold ripening can be used to reduce oxygen by direct consumption and reduction in light penetration. The sausage diameter also affects biochemical reactions involving greater diameter sausages (anaerobic) due to less oxidation. The concentration of glucose does not influence the maximum lipase activity; however, it is essential for rapid lipase production [17].

Around the globe for thousands of years, fermented foods are part of the human diet due to modifications in their natural form, contributing to enhanced flavor and high-profile nutritional properties without much information and knowledge of microbial functionality.