Extracellular vesicles (EVs) are complex phospholipidic structures actively released by cells. EVs are recognized as powerful means of intercellular communication since they contain many signaling molecules (including lipids, proteins, and nucleic acids).

Currently, the intricate scenario of cell-to-cell communication is further complicated by the recognition of the pivotal role of EVs. EVs are complex phospholipidic cell-derived structures actively released from cells in the environment and able to shuttle biological information across cells and tissues. Although the involvement of EVs in virtually all biological processes (i.e., embryogenesis, neuronal plasticity, immune response) was demonstrated in the last decade, the existence of EVs was reported by Wolf in 1967, associated with platelets and coagulation [1], and they were subsequently observed in reticulocyte differentiation, acting as a cellular garbage system[2]. Since then, extensive research activity in the field has led to a better—although largely incomplete—understanding of their biological properties and has laid the foundation for their use as diagnostic and therapeutic tools[3]. Extracellular vesicles are classified into the following three main classes, accordingly to Minimum Information for Studies of EVs (MISEV) guidelines: small extracellular vesicles (sEVs, diameter < 200 nm, also known as exosomes), medium/large extracellular vesicles (m/lEVs, diameter >200 nm up to 1000 nm, also known as microvesicles), and apoptotic bodies (>1000 nm up to 5000 nm)[4]. Apart from the size, the three classes of EVs differ in their biogenesis[5] (Figure 1). Small EVs derive from the release of a larger structure, called a multivesicular body (MVB), a component of the endocytic pathway that sorts sEVs in its lumen, finally releasing them by the fusion with the plasma membrane. This mechanism involves multiple protein partners, such as Ras-related proteins in brain (RAB), endosomal sorting complex required for transport (ESCTR) components, and proteins in the ceramide/sphingomyelinase pathway[5]. Medium/large shedding EVs, or microvesicles, bud from the cell surface by sprouting and scission of the membrane. ADP-ribosylation factor 6 (ARF6) activates the phospholipase D (PLD), resulting in a phospholipidic reorganization and thereby relocating phosphatidylserines toward the outer side of the membrane. Finally, extracellular signal-regulated kinase (ERK) is recruited to the plasma membrane and activates through phosphorylation the myosin light-chain kinase (MLCK), resulting in invagination of plasma membrane and release of EVs[5]. Apoptotic bodies arise from the cleavage of the cell during apoptosis, a way to neatly package the cell components in the surroundings and exert many biological effects[6][7]. 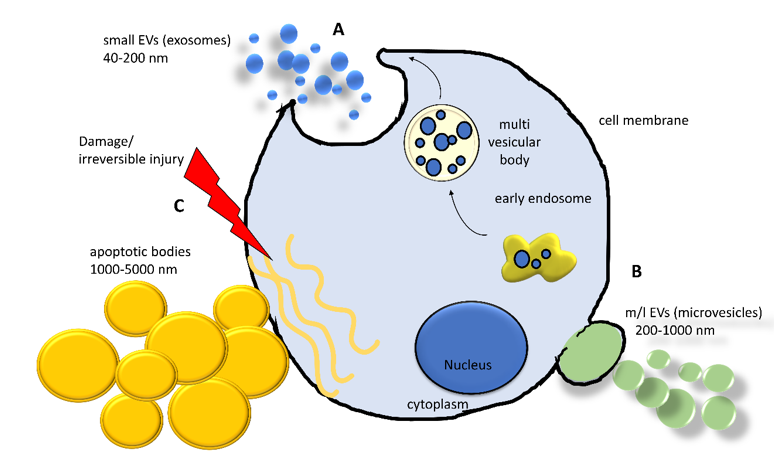 Interestingly, all the resident bone cells, i.e., osteoblasts, monocytes/macrophages, osteoclasts, osteocytes, adipocytes, and endothelial cells, have been demonstrated to release EVs or respond to EVs both in physiological and pathological conditions[8][9][10][11][12][13][14][15]. EVs have been identified to shuttle molecules coming from the molecular legacy of the donor cells, exerting a specific effect according to the metabolic status of parental cells [16]. A multitude of studies defined the involvement of EVs in transferring genetic materials in many systems. For example, monocyte-derived EVs shuttle miR-155 to the endothelium, increasing endothelial cell migration[17]. Lv et al. demonstrated that renal tubular epithelial cells communicate by EVs shuttling miR-19b-3p to macrophages, leading to M1 macrophage switching[18]. Multiple myeloma cells under hypoxic conditions release miR-135b enriched sEVs able to decrease in target endothelial cells the factor-inhibiting hypoxia-inducible factor 1 (FIH-1), thereby increasing angiogenesis[19]. For a more detailed review on this aspect, see O’Brien et al.[20].

2. Control of Bone Metabolism by Means of EVs

Here, we discuss in more detail some examples of miRNA and lncRNA transfer by EVs among the bone cells, focusing on mechanisms detrimental to bone quality (Figure 2). 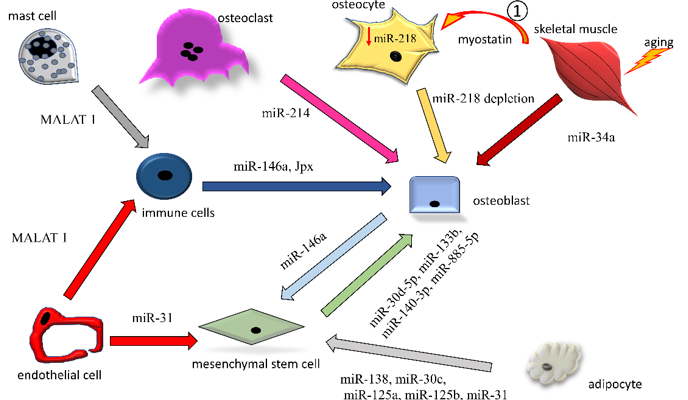 Figure 2. Intercellular exchanges of non-coding RNAs by means of EVs among bone-resident cells. Non-coding RNAs exerting osteopenic activity (increase in osteoclastogenesis or decrease in osteogenesis) are reported. Only ncRNAs directly found encompassed in EVs are reported in the figures. The arrows indicate the origin-to-destination direction between cells (donor to target cell).

1: soluble myostatin, released by aging muscle, affects osteocytes in a paracrine manner, reacting with the drop in endogenous miR-218a (↓miR-218a). The miR-218a-poor EVs released by the affected osteocytes are taken up by osteoblasts, contributing to the perturbation of osteogenesis.