Androgens and anti-Müllerian hormone (AMH), secreted by the foetal testis, are responsible for the development of male reproductive organs and the regression of female anlagen. Virilization of the reproductive tract in association with the absence of Müllerian derivatives in the XX foetus implies the existence of testicular tissue, which can occur in the presence or absence of SRY. Recent advancement in the knowledge of the opposing gene cascades driving to the differentiation of the gonadal ridge into testes or ovaries during early foetal development has provided insight into the molecular explanation of XX maleness.

Ovarian differentiation and female internal and external genitalia are the expected pathway in the mammalian XX foetus (Figure 1). Only rarely, may XX gonads follow the testicular differentiation pathway, and consequently internal and external genitalia are virilised by testicular hormones. This “sex-reversal” condition was initially characterised in humans and named “XX male” [[1]], since no hint of a disorder of sex development was present until adulthood, when these males sought medical attention for infertility (see below). Alternatively, testicular tissue was also observed together with ovarian tissue in the same individual carrying an XX karyotype. The condition was known previously as “hermaphroditism”, and most frequently internal and external genitalia are ambiguous since the testicular moiety is functionally insufficient to induce full virilisation during embryonic and foetal development. Finally, virilisation of an XX foetus with ovarian development and absence of testicular tissue can be the consequence of an androgen excess of extragonadal origin. Indeed, disorders of adrenal steroidogenesis—like congenital adrenal hyperplasia [[2]], androgen-secreting adrenal or ovarian tumours or maternal use of anabolic steroids [[3]], and placental aromatase deficiency [[4]] can lead to foetal virilisation in the absence of testicular tissue. In this review, we will address only those conditions in which there is testicular differentiation despite an XX karyotype, with special emphasis in conditions affecting human individuals. 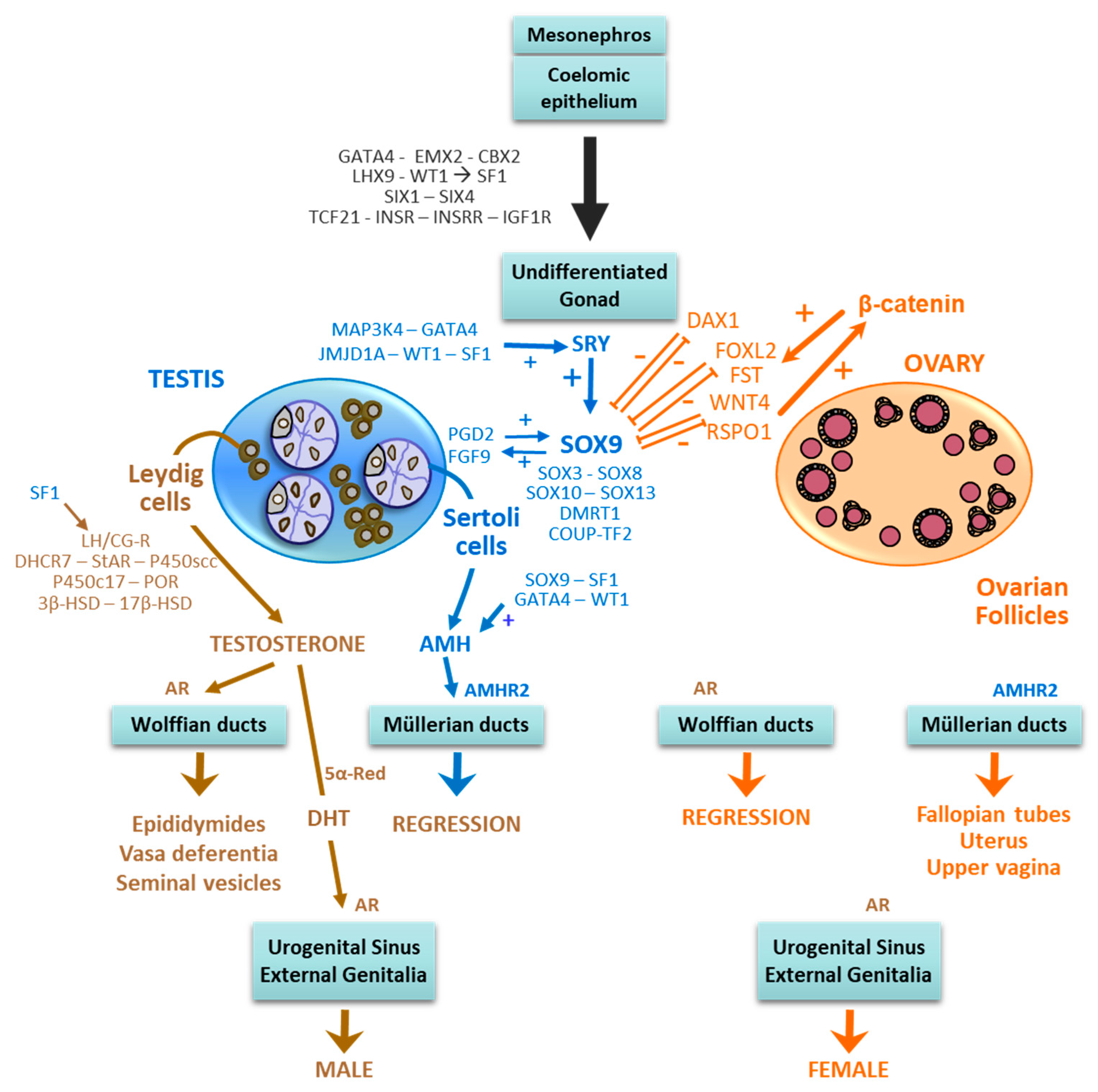 Figure 1. Sex differentiation during embryonic and foetal life in mammals: the mesonephros and the coelomic epithelium are stabilized and their cells proliferate, in response to the action of GATA4, EMX2, CBX2, LHX9 and WT1 -which upregulate SF1-, SIX1 and SIX4, TCF21 and members of the IGF family, to form the undifferentiated gonad. In XY foetuses, SRY expression is triggered by MAP3K4, GATA4, JMJDA1, WT1 and SF1; SRY upregulates SOX9 and other SOX family members. SOX9, PGD2 and FGF9 establish a positive feed-forward loop, which increases SOX9 expression, which prevails over DAX1, FOXL2, WNT4 and RSPO1, thus promoting testicular differentiation. The developing testis secretes testosterone and anti-Müllerian hormone (AMH), responsible for male differentiation of internal and external genitalia; testosterone can be transformed into dihydrotestosterone (DHT), a more potent androgen, through the action of the enzyme 5α-reductase (5α-Red); both testosterone and DHT act on the same androgen receptor (AR). In the XX foetuses, due to the absence of SRY, SOX9 expression remains low and is overcome by DAX1, FOXL2, WNT4 and RSPO1, which upregulate β-catenin; a feed-forward loop between these pro-ovarian factors is established, resulting in the differentiation of the female gonad. Since the ovary does not secrete androgens and AMH, internal and external genitalia develop through the female pathway. Modified with permission from Rey and Grinspon, 2011 [[5]]. Copyright 2010 Elsevier Ltd.

Irrespective of their sex-chromosome constitution, all mammalian embryos are anatomically, histologically and functionally undifferentiated from a sexual standpoint during the first stages of development, approximately six weeks in humans and 10 days in mice. The gonadal ridges are bipotential, i.e., they can form ovaries or testes. Concomitantly, XX and XY embryos develop the anlagen for both male and female internal reproductive ducts; each pair of ducts is unipotential: the Wolffian (mesonephric) ducts may give rise only to male functional reproductive derivatives, whereas, the Müllerian (paramesonephric) ducts may give rise only to female functional structures. The primordia of the external genitalia are bipotential, like the gonads.

During the bipotential period, the XX and the XY gonadal ridges show identical expression profiles for purportedly pro-testicular factors, like SOX9 and FGF9, and pro-ovarian factors, like WNT4, RSPO1, and DAX1 [[6]]. Cell proliferation in the somatic component of the gonadal ridges is an essential process, which is regulated at this stage by LHX9 interaction with WT1 resulting in the modulating SF1 expression [[7],[8]]. Other factors responsible for somatic cell proliferation are TCF21, INSR, IGF1R, and INSRR (Figure 1). During early gonadal differentiation, cell proliferation is more critical in the male testis than in the ovary [[9]]. WT1 and SF1 play also key roles in the whole process of urogenital organogenesis. WT1, named after Wilms’ tumour (nephroblastoma), is a transcriptional and post-transcriptional regulator [[10]] that is expressed early in the urogenital ridge and plays an essential role in the development of the kidneys and gonads. SF1 is encoded by the NR5A1 gene. Initially described as a regulator of steroid hydroxylases in the adrenal cortex, SF1 is an orphan nuclear receptor also expressed in the hypothalamus, the pituitary and the gonads [[11]]. In the early embryo, SF1 is essential for the development of the gonadal primordium [[12]].

The differentiation of the gonadal ridges into ovaries or testes requires a delicate dosage balance in the timing and levels of expression of several genes [[13]]. In most mammalian embryos, the transient expression of SRY, which maps to the Y chromosome, triggers a cascade of gene interactions ultimately leading to the formation of a testis from the indifferent gonadal ridge [[14]]. SRY expression initiates in the middle of the gonad and expands toward the poles [[15]]. The timing and level of SRY expression are critical for proper testis differentiation: delayed or decreased expression results in dysgenetic testicular or ovotesticular differentiation in the mouse [[16],[17],[18]]. In most mammals, the SRY-box gene SOX9 is the earliest upregulated gene in the testis pathway downstream of SRY (Figure 1), followed by CITED4 and other members of the SOX family, including SOX3, SOX8, SOX10 and SOX13. Many other genes are also critical for testicular differentiation [[13],[19],[20]]. FGF9 has a role in Sertoli cell differentiation: Fgf9-knockout mice have dysgenetic gonads [[21]].

In human foetuses, Sertoli cell differentiation, characterised by the expression of SOX9 [[22]], AMH [[23],[24]] and DHH [[25],[26],[27]], and cord formation begin in the central part of the gonad [[28]] by the end of the seventh week. Differentiating Sertoli cells also express growth factors, like nerve growth factors (NGFs), which can induce cell migration from the mesonephros acting through their receptors TRKA (NTRK1) and TRKC (NTRK3) [[29],[30]]. In the interstitial compartment, Leydig cells differentiate amongst connective tissue and blood vessels. The formation of the coelomic vessel is a particular feature of early testicular differentiation [[31],[32]].

The origin of Leydig cells is less clear: the mesonephros, the coelomic epithelium, the neural crest and resident SF1-expressing cells in the adreno-gonadal primordium have been proposed as their precursors [[33],[34],[35],[36],[37]]. Leydig cells differentiate a few days later than Sertoli cells initially depending, at least partially, on Sertoli cell-secreted PDGFs binding to PDGFRα [[38]] independently of gonadotropin action [[39],[40]]. Nonetheless, in humans further Leydig cell differentiation requires placental chorionic gonadotropin (hCG) in the first and second trimesters of foetal life and foetal pituitary luteinizing hormone (LH) thereafter acting on the LH/CG receptor [[41]]. FGF9 [[42]] and DHH [[43]] are other factors secreted by Sertoli cells and responsible for normal Leydig cell differentiation.

Genes involved in ovarian differentiation of the bipotential gonad increase their expression somewhat later than those involved in testis differentiation. WNT4 and RSPO1 stabilise β-catenin, encoded by CTNNB1, which promotes the expression of ovarian genes, like FST (follistatin) and FOXL2 (Figure 1), resulting in granulosa cell differentiation [[44],[45],[46]]. Follistatin also counteracts FGF9, SOX9 and activins A and B, thus repressing the formation of the coelomic vessel [[13],[47],[48],[49],[50]]. By upregulating DAX1, WNT4 also antagonizes SF1 and thus inhibits androgen biosynthesis [[51]]. WNT4 also acts as a germ cell survival factor in the ovary [[52]]. In the mouse, FOXL2 is required to continuously suppress SOX9 until adulthood, thus preventing ovarian cells from transdifferentiating into “testis-like” cells [[53]]. Finally, a number of factors are essential for folliculogenesis [[54],[55]]: neurotrophins and their receptors promote follicular development, FIGα is essential for primordial follicle formation, NOBOX, SOHLH1 and SOHLH2 play a role in the differentiation to primary follicles, and BMP15 and GDF9 are involved in later stages of folliculogenesis.

2.4. The Differentiation of the Internal and External Genitalia

The ground-breaking observations made by Jost almost seventy years ago [[56]] taught us that the differentiation of the gonadal ridges into testes is determinant for the virilisation of the foetus. This is due to the fact that the testes have two endocrine cell populations: Leydig cells produce androgens, which induce the differentiation of the Wolffian duct into the epididymis, vas deferens and seminal vesicles and the virilisation of the primordia of the external genitalia [[57]], and Sertoli cells secrete anti-Müllerian hormone (AMH), responsible for the regression of the Müllerian ducts, which otherwise form the Fallopian tubes, the uterus and the upper vagina [[58],[59]] (Figure 1).

AMH acts very early in foetal life through its interaction with the specific AMH type 2 receptor, encoded by AMHR2 [[60]]. The molecular mechanisms involved in this process have recently been reviewed in detail [[61]]. On the other hand, testosterone and dihydrotestosterone [[62]], acting through the androgen receptor, drive the differentiation of derivatives of the Wolffian duct, the urogenital sinus and the external genitalia. The extent of the regression of Müllerian ducts as well as of the male differentiation of the internal and external genitalia is commensurate with the functional capacity of the foetal testes to produce AMH and androgens during the narrow window of foetal sex differentiation [[5]].

As it can be deduced from the knowledge of the normal mechanisms underlying foetal sex differentiation described above, testicular tissue can occur in individuals when Y-chromosome sequences encompassing SRY are present (Figure 2). These individuals, known as SRY-positive, may have a pure 46,XX karyotype or 46,XX/46,XY chimaerism. Nonetheless, testicular development may take place in the absence of SRY, these cases being described as SRY-negative. Finally, male development of the external genitalia can occur in the absence of testicular tissue, for instance in human patients with congenital adrenal hyperplasia, androgen-secreting adrenal or ovarian tumours, maternal use of anabolic steroids or placental aromatase deficiency. These are beyond the scope of the present review.

Figure 2. Testicular and ovotesticular differentiation in XX foetuses. In individuals with Yp translocations, the presence of SRY triggers testicular differentiation (SRY-positive cases). In SRY-negative individuals, testicular development may result from overexpression of “pro-testicular” factors (e.g., SOX9, SOX3, SOX10, FGF9, DMRT1) due to duplications/triplications of gene coding or regulatory sequences, or from inactivating mutations of “pro-ovarian” factors (e.g., RSPO1, WNT4, FOXL2) or factors that are believed to favour the gene dosage balance through the ovarian pathway (WT1, SF1, COUP-TF2). Generally, though not always, testicular DSD presents with male genitalia and ovotesticular DSD with ambiguous genitalia.

In both SRY-positive and SRY-negative situations, the gonads can completely differentiate into testes, and the condition is known as “XX male” or “46,XX testicular disorder of sex development (DSD)” (Figure 2). When testicular and ovarian tissues are present, as confirmed by histological studies showing the presence of seminiferous tubules and ovarian follicles with oocytes, the condition is known as “hermaphroditism” (term used widely in previous decades but now limited to animals, see below) or “ovotesticular DSD” (preferred for humans) (Figure 2). The proportions of ovarian and testicular tissue can vary amongst patients, and the presentation may also be asymmetric, with predominance of one tissue type on one side and of the other contralaterally, or even the existence of only one tissue type on one side and only the other or both contralaterally. As discussed below, the amount of functional testicular tissue determines the anatomical aspect of the internal and external genitalia, while the amount of ovarian tissue has no effect on the genital phenotype of the new-born.