A cataract is an ophthalmic disorder characterized by the opacification of the lens and occurs commonly in older people. Age-related cataract is a significant cause of blindness affecting the quality of life worldwide. An imbalance between oxidative stress and antioxidant potential of ocular tissue is considered responsible for structural modifications of crystallins, the protein constituents of the lens, which eventually leads to cataracts. Lutein and zeaxanthin are two major carotenoids which are concentrated in the human lens. Many preclinical and clinical studies provide compelling evidence for a protective role of dietary carotenoids in age-related cataracts.

A cataract is a visualization problem in which the lens develops opacity, and age-related cataract is a leading cause of blindness. Depending on the morphology, cataract is classified into different types. The outer section of the tissue becomes opaque in cortical cataracts, the inner core in nuclear cataracts, and the superficial region below the capsule on the posterior side in posterior subcapsular cataracts [1]. In western countries, cataract surgery is most frequently done in people aged 65 years or older [2]. This is one of the most common surgical procedures among the general population, and the prevalence is increasing each year [3]. In the United States, 3.38 million cataract surgeries were performed in 2017 [4]. Although cataract is mainly an age-related phenomenon, socioeconomic and lifestyle factors (smoking, diet, intake of nutrients, alcohol consumption, etc.) also influence cataract initiation and progression [2][5]. 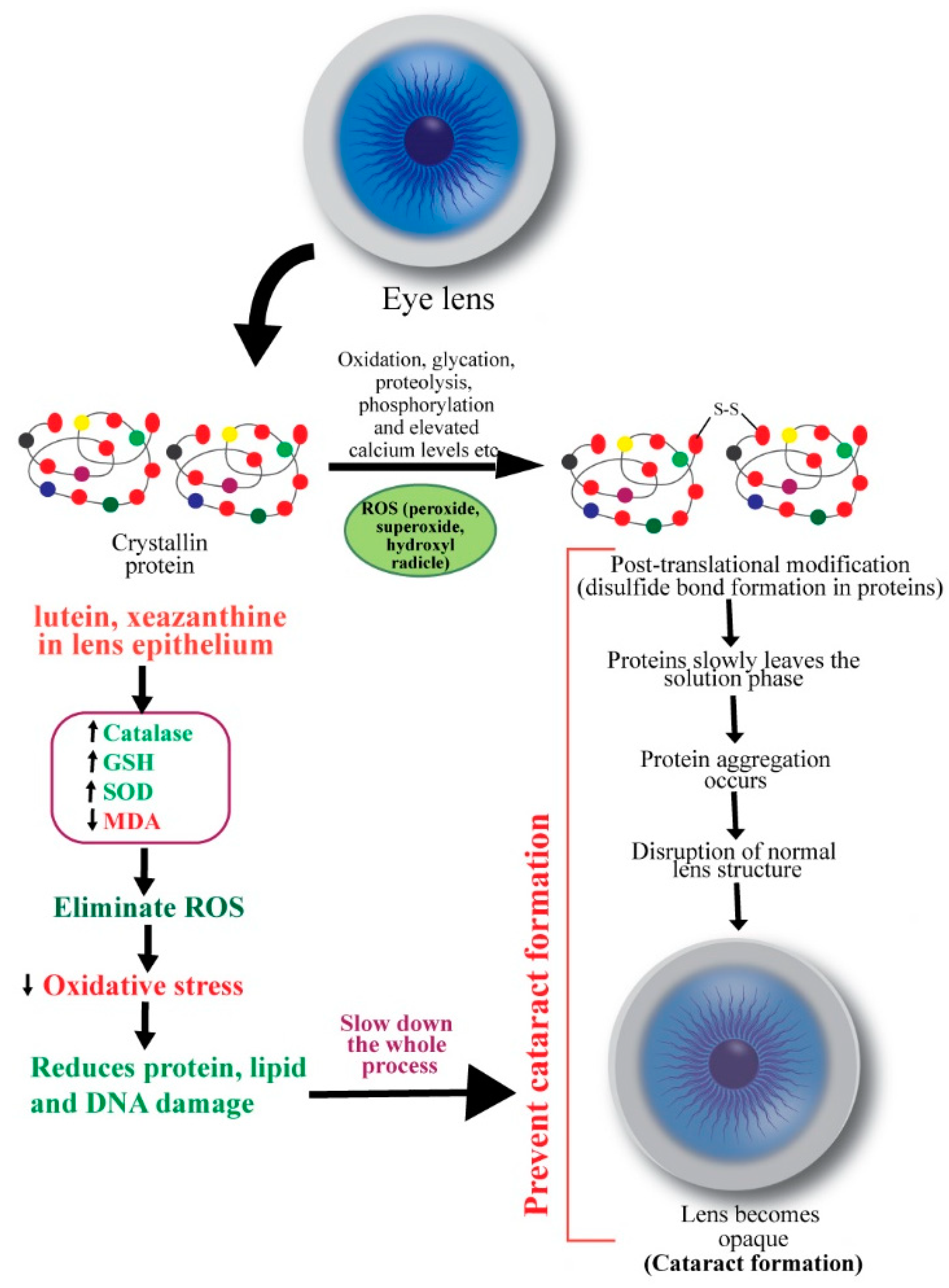 Ocular oxidative stress may result from an imbalance between the generation of reactive oxygen species (ROS) and the cellular antioxidant defense mechanisms and subsequently initiate lens opacification [9]. ROS, such as hydrogen peroxide, superoxide, and hydroxyl radicals, negatively modifies the lens, whereas antioxidants, including glutathione (GSH), ascorbate, and catalase, rescue the lens proteins against ROS [10][11]. Hydrogen peroxide, the primary oxidant in the pathogenesis of cataract, is eliminated by catalase and glutathione through enzymatic reactions. A decreased level of reduced glutathione in older lenses’ nucleus promotes cataract formation [10][12]. An imbalance in redox reactions can also initiate lipid peroxidation, promoting cataractogenesis. Spector (1995) mentioned that the massive oxidation of thiol to protein and mixed disulfides, cysteic acid, and methionine sulfoxide and cataract-extensive methionine sulfoxide formation are common in the older lens [1]. In the nucleus of nuclear cataracts, covalently linked disulfide bonds containing polypeptides and in cortical cataracts, high molecular weight disulfide-linked aggregates were found [13]. Thus, oxidation of crucial sulfhydryl groups of enzymes and membrane proteins and the peroxidation of lenticular plasma membrane lipids also contribute to cataract pathogenesis [14].

3. Roles of Carotenoids in Cataracts

Carotenoids are the most abundant pigment groups and lipid-soluble antioxidants in nature that are responsible for the yellow, orange, or red color of fruits, leaves, and flowers [15][16]. They are C40-based isoprenoids of the tetraterpene family and are biosynthesized by the linkage of two C20 geranylgeranyl diphosphate molecules [17][18]. β-carotene, α-carotene, lycopene, lutein, and cryptoxanthin are some dietary carotenoids found in human blood [19]. β-carotenes, which are precursors of vitamin A, have greater pro-vitamin A potential compared to α-carotene or β-cryptoxanthin because of the presence of a β-ionone ring linked to a chain of 11 carbons [16][20]. β-carotene, α-carotene, and lycopene are composed only of carbon and hydrogen atoms, whereas xanthophylls are carotenoids with at least one oxygen atom. Zeaxanthin, lutein, α-and β-cryptoxanthin, canthaxanthin, and astaxanthin are important xanthophylls containing hydroxy and keto groups in their structures [21].

Carotenoids’ roles as antioxidants are known for many decades. β-carotene was found to markedly inhibit lipid peroxidation induced by xanthine oxidase in a pioneering study by Kellogg III and Fridovich [22]. Chemical antioxidants (e.g., α-tocopherol, β-carotene, ascorbate, and GSH) and structural antioxidants (e.g., cholesterol and membrane protein) are implicated in preventing oxidative damage of the ocular tissues [23]. Christen (1994) reviewed antioxidants’ protective effects in cataract and macular degeneration and found that animal studies invariably advocated in favor of dietary antioxidants, although results from epidemiological analyses were inconclusive [24].

The human lens contains lutein and zeaxanthin but not β-carotene [25]. It has been suggested that antioxidants lutein and zeaxanthin are delivered continuously from the body pool to the epithelial/cortical layer of the lens, where they scavenge ROS by up-regulating GSH, catalase and SOD activities [26]. Gao et al. (2011) reported that lutein and zeaxanthin could reduce the risk for senile cataract by protecting lens protein, lipid, and DNA from oxidative damage. They incubated human lens epithelial cells with or without 5 µM lutein, zeaxanthin, or α-tocopherol for 48 h. Then the cells were exposed to 100 µM H2O2 for 1 h to induce oxidative stress. By using a battery of in vitro analyses, the authors observed that the levels of H2O2-induced protein carbonyl, MDA, and DNA damage were significantly reduced by lutein and zeaxanthin [27].

The association of carotenoids and cataracts has been established through numerous preclinical and clinical studies. As the human body cannot synthesize this important class of molecules, they must be supplied as dietary intake or food/pharmaceutical supplement. However, Gastrointestinal absorption and subsequent distribution to ocular tissues are influenced by dietary factors, formulations, gender, age, disease states, and individual genetic variations [28][29]. Novel drug delivery systems and formulations could be exploited to achieve favorable pharmacokinetic and pharmacodynamic profiles of macular xanthophylls in humans. In addition, long-term clinical trials with large numbers of populations may be undertaken to confirm the effects of these molecules in cataracts. Future studies will substantiate the therapeutic potentials of different β-carotenoids in ophthalmic disorders.