Chemoresistance and metastasis are the main malignant features in cancer, resulting the unfavorable outcome. Accumulating evidence suggest dyregulated autophagy contributes to resistance to conventional therapy and metastasis which can be regulated by lncRNAs, circRNAs and miRNAs. Autophagy consists of a cascade of steps controlled by different autophagy related genes that can be regulated those ncRNAs. The lncRNAs, circRNAs, miRNAs, mRNAs compromised competing endogenous RNA network and participate in carcinogenesis. Here, we attempt to review the role of ceRNAs in cancer metastasis and chemoresistance through autophagy regulation.

Autophagy is an evolutionarily conserved system to maintain homeostasis in various cells. In general, there are three main types of autophagy: macroautophagy, microautophagy and mitoautophagy [1]. Mitoautophagy can remove damaged mitochondria specifically by autophagosomes for lysosomal degradation while microautophagy, mainly in plants and fungi, may complete the isolation and uptake of cell components by directly enveloping them with the vacuolar/lysosomal membrane. Macroautophagy is the best-characterized process that aims to remove unwanted or damaged organelles and aggregated proteins by lysosome degradation. In the narrow sense, some scientists (including those in this article) have referred to macroautophagy as autophagy.

Long non-coding RNAs (lncRNAs) and microRNAs (miRNAs) are non-coding RNAs (ncRNAs) with respective lengths of more than 200 nucleotides and about 22 nucleotides. Both participate in various physiological and pathological processes involving tumorigenesis, such as cell proliferation, apoptosis, EMT, invasion, migration, chemoresistance, and stemness [9]. lncRNAs can regulate gene expression through repressing chromatin components [10], mediating epigenetic silencing, interacting with Polycomb complex, and modulating transcription activation [11]. Considering that there is a complex interplay among messenger RNA (mRNA) and ncRNAs [12][13], lncRNAs also function as miRNA sponges by competitively binding with miRNAs, thereby releasing the targeted mRNAs [14][15]. These lncRNAs are called competing endogenous RNAs (ceRNAs). They can decrease the activity or expression of miRNAs [16][17]. Circular RNA (circRNA) is another kind of ncRNA comprising covalently closed single-stranded loops. Recent advances in RNA sequencing and bioinformatics tools have led to the discovery and identification of thousands of circRNAs and validated their important roles in the pathogenesis of cancers [18][19][20][21]. They can mainly function as ceRNAs to modulate gene transcription by interacting with miRNAs or lncRNAs, sponging miRNAs, or RNA-binding proteins, and rarely can be translated into proteins [22][23][24][25]. In addition to lncRNA and circRNA, other ceRNAs have also been identified by bioinformatics analysis and experimental evidence, such as pseudogenes, mRNA including those expressing 3′-untranslated regions, virus non-coding RNAs, and genomic viral RNAs [26]. Pseudogenes, the relicts of parental gene that are unable to encode full-length proteins, can regulate the expression of parental genes via ceRNA networks, and participate in tumorigenesis [27]. Some mRNAs can function as ceRNAs and can be associated with human diseases such as cardiovascular diseases and glioblastoma multiforme [28][29]. Accumulative data have indicated that ceRNAs, particularly lncRNAs and circRNAs, can bridge the interplay between autophagy and chemoresistance or metastasis in cancers [30][31][32][33][34].

2. An Overview of Autophagy-Regulated Cancer Metastasis and Chemoresistance

Emerging evidence has supported the roles of autophagy in the processes of cancer metastasis and chemoresistance. Cancer cells may succeed in metastasis through tumor-promoting autophagy [5], and survival against chemotherapy through protective autophagy [6][7][8].

In most cancers, the activation of autophagy promotes chemoresistance and indicates poor survival. Chemotherapeutic agents induce stress, thus activating autophagy as a cellular adaptive response [35][36]. Recently, it has been demonstrated that DNA damage can induce the process of autophagy and upregulate related genes, essentially resulting in chemoresistance [37]. Therefore, the activation of autophagy becomes a novel molecular mechanism for chemoresistance modulated by some lncRNAs in cancer cells, such as GBCDRlnc1 in gallbladder cancer [38] and MALAT1 in gastric cancer [39]. Under some circumstances, autophagy inhibition may restore chemotherapy sensitivity. For instance, autophagy suppression by Atg7 knockdown enhanced chemosensitivity and prolonged overall survival in AML mouse models [35]. Autophagy mediated by OPN/NF-κB signaling is essential for pancreatic cancer stem cells, while pharmacological inhibition of autophagy increased drug sensitivity [40]. These findings suggest a link between autophagy and cancer stem cells—the root cause for chemoresistance and disease relapse. Additionally, autophagy suppression can enhance chemotherapy response in triple-negative breast cancers (TNBCs) [36]. In HCC cells, miR-541 increased their sensitivity to sorafenib by inhibiting autophagy [41]. Moreover, N6-isopentenyladenosine also improved chemotherapy sensitivity by impairing autophagy in melanoma [42].

Cancer cells experience invasion into the circulation, migration into the pre-metastatic niche, and colonization at the new place [43]. A substantial body of evidence has shown that autophagy is crucial for cancer metastasis through regulating many important steps in this process, such as tumor invasion, migration, EMT, the crosstalk between stromal cells and tumor cells, and immune surveillance [43][44][45][46]. The precision function of autophagy in cancer metastasis remains controversial to date, with tumor-promoting roles in most studies and suppressive roles in a few [47]. A high level of ATG5 is required for metastasis in the mouse models of pancreatic ductal adenocarcinoma [48], while elevated LC3B has been indicated to be associated with invasion and metastasis in solid tumors [49]. Ube2v1, a ubiquitin-conjugating E2 enzyme variant, can facilitate metastasis in colorectal cancer by inhibiting autophagy. Importantly, rapamycin and trehalose treatment may reverse Ube2v1-mediated metastasis in mouse models [50]. In ovarian carcinoma, circMUC16-mediated autophagy promotes metastasis by directly binding to ATG13 and enhancing its expression. Moreover, cirMUC16 could also function as a ceRNA for miR-199a-5p and relieve its inhibitory on Beclin-1 and RUNX1 [51]. Nevertheless, in breast cancer, the expression of autophagy-related genes negatively correlates with pre-metastasis signatures, and thereof restricts tumor metastasis [52][53].

Most metastatic cancer cells are chemoresistant [3][54]. It is prerequisite to explore the underlying molecular link between metastasis and chemotherapy. Many factors significantly contribute to drug resistance, such as cancer cell heterogeneity, drug efflux, strength of DNA repair, cancer cell stemness, and dysregulated proliferation/apoptosis pathways [55][56][57]. Under unfavorable circumstances, autophagy activation can protect cells from stress-induced injury [58][59]. Unequivocally, chemotherapy drugs can activate autophagy in cancer cells [60]. The metastasis of cancer harbors some key events, such as EMT, invasion into vessels, resistance to anoikis in circulation, and travelling to the secondary site [45]. During this process, cancer cells struggle to survive against various stresses. Likewise, autophagy also plays an important part in metastasis against these stresses [61]. Moreover, even in the secondary site, it is important to build up an appropriate microenvironment—that is, the pre-metastasis niche [62][63]. Autophagy is essential for niche formation owing to its biological effects on stromal cells, immune escape, angiogenesis, and lymphangiogenesis [62]. Therefore, further clarification of the mechanism of autophagy regulation in metastasis and chemoresistance may greatly improve the efficacy of chemotherapy and survival in cancer patients.

lncRNAs, circRNAs, and miRNAs are critical in tumorigenesis and may serve as promising therapeutic targets and biomarkers for cancers [9][64][65]. ceRNAs communicate with different types of RNAs in cancer progression, forming the network among lncRNAs, circRNAs, miRNAs, and mRNAs [15][66]. In this manuscript, we summarized the role of ceRNA-regulated autophagy in chemoresistance and metastasis. ceRNAs can regulate the expression of autophagy-related genes via binding with some miRNAs. These genes include mTOR, ULK1, ATG3, ATG4, ATG5, ATG7, ATG12, ATG13, and ATG14, which are critical for autophagosome initiation, elongation, and fusion with lysosomes (Figure 1). 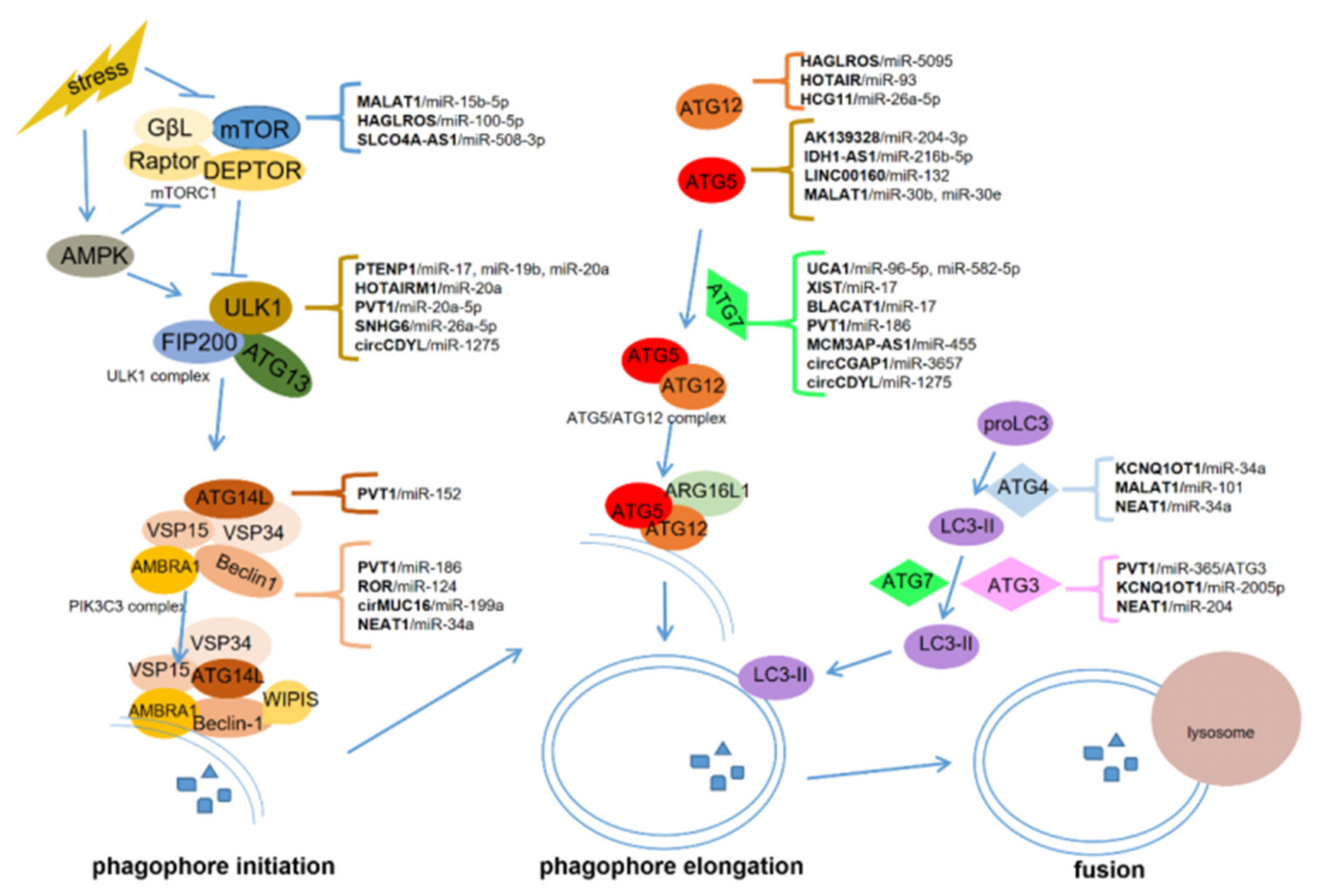 To date, ceRNA-mediated autophagy is mostly known as a positive regulator of chemoresistance and metastasis. These ceRNAs can promote chemoresistance through proliferation inhibition and apoptosis induction, and facilitate metastasis by inducing EMT, invasion, migration, angiogenesis, and modulating the pre-metastasis niche. Some ceRNAs can be packaged in exosomes which are derived from cancer cells or bone marrow mesenchymal stem cells. The exosomal ceRNAs contribute to optimizing the microenvironment for cancer metastasis. However, more work is required to uncover how ceRNA-mediated autophagy regulates chemoresistance and metastasis in cancers. Particular issues might be focused on the potential role of ceRNAs in the crosstalk among cancer cells and the tumor microenvironment composed of stromal cells, endothelial cells (angiogenesis), and immunocytes. Nevertheless, several critical issues should first be addressed.

The ceRNA theory is supported by a great body of experimental data on lncRNAs and circRNAs. The studies are invariably associated with ectopic vectors which produce much higher than physiological levels in cancer cells, and unavoidably present non-physiological phenotypes [67]. The stoichiometry required for a ceRNA, a competitor for miRNAs, includes a substantially higher endogenous content and affinity with linear transcripts over miRNAs; therefore, it is very unlikely that a low-level ceRNA or physiological changes in the expression of an individual ceRNA would effectively regulate a far more abundant miRNA target. In fact, the abundance of ceRNAs such as lncRNA and circRNA in cancers has always been a major concern. The absolute levels of functional ceRNAs in cancer tissues have not been well addressed to date, owing to the difficulty in accurately quantifying ceRNAs and due to some technical problems in tissue preparation. The unification of accurate quantification becomes a prerequisite for ceRNA studies in cancers before we can find a functional ceRNA with considerably high contents.

A ceRNA may target multiple miRNAs, and the potential target miRNAs may also have several target genes. It is reasonable to reckon that a subtle alteration of the miRNA by its upstream ceRNA may have a significant effect on the target genes in the process of autophagy. The development of a ceRNA network is crucial for better understanding the molecular mechanisms and potential utilities underlying gene expression regulated by ceRNAs. However, ceRNA networks have so far predominantly been constructed by bioinformatic prediction, with very limited experimental data. Another important issue with regard to the interaction between ceRNA and miRNA is the problem of “degradation” or “inhibition”, which is crucial for ceRNA function [67]. There is still conflicting evidence describing the effect of ceRNA–protein complexes on the degradation of miRNA after binding. It may be determined by the status of the binding sites between circRNAs and miRNAs: “degradation” in the case of completely complementary, or “inhibition” when partially matched [68].

Bioinformatic analysis, dual-luciferase assay, and methods measuring gene expression (e.g., reverse transcription-PCR (qRT-PCR) and Western blot) are the most commonly applied approaches in ceRNA investigations [26]. Results from bioinformatic prediction should be validated by experimental data. Dual-luciferase assay and gene expression analysis are not direct and sound methods to establish the interaction among ceRNA, miRNA, and mRNA. The reliable methods are currently RIP and RNA pull-down. However, both methods have only been applied in a small number of studies. Importantly, the experimental results are obtained from gain- or loss-of-function assays in vitro and, uncommonly, in vivo. The technical limitations and defects should be appreciated in the assessment of the current studies. From the perspective of clinical relevance, future elaborate work in primary-cancer-derived organoids which repeat the pathological features of cancer [69], and studies in vivo will consolidate the interaction among ceRNA, miRNA, and RNA; therefore, they will ultimately provide great insights into carcinogenesis including autophagy-related cancer chemoresistance and metastasis.