Metal ions can be involved in signaling processes within the cell in both physiological and pathological conditions. Magnesium and calcium are the most recognized signaling agents among metals. Zinc, copper, and iron can also play key roles in signaling pathways. There are many systems in which changes in intra- and extra-cellular zinc and copper concentrations have been linked to important downstream events, especially in nervous signal transduction. Iron signaling is mostly related with its homeostasis. However, it is also involved in a recently discovered type of programmed cell death, ferroptosis.

Signal transduction and spreading is a key cellular process in maintaining life and its development. Typical chemical signaling comprises the release of a transmitter from one cell and its interaction with selected detectors on the surface of another. If the transmitter is taken up into the cell, it may bind to receptors on the inner part of cell membrane and, thus, stimulate it to react in a required manner to this signal. The molecular mechanisms of reaction to the signal are regulated by a strict spatiotemporal dynamic [1]. The signal effectiveness and transduction differ on the extra and intracellular side of the cell. In general, extracellular signaling depends on exposure to a sufficient carrier concentration. Simultaneously, the changes in the timing and frequency of a messenger are crucial for the intracellular signals [2]. Changes in the concentration of metal ions affect the signaling processes in both excitable and non-excitable cells on both sides of the cellular membrane [3][4][5][6].

The major groups of chemical neurotransmitters in excitable cells are amino acids, amines, or neuropeptides. Recent studies also indicate that metal ions, such as zinc and copper, may be released to the synaptic cleft [7][8][9]. This phenomenon is still not fully understood; however, it is a very interesting example of signaling involving metal ions. Many new studies and conclusions have appeared in this field recently. Studies show that both the normal aging of the brain and the development of diseases, such as neurodegenerative and psychiatric disorders, are manifested by deregulation of the management of metal ions such as iron, zinc, and copper. That disproportion can have a direct impact on the neurotransmission coordinated by these ions and cellular processes necessary for proper functioning of nerve cells [10][11]. Furthermore, iron ions, along with reactive oxygen species (ROS), were connected with a recently discovered form of programmed cell death named ferroptosis [12]. While the pathological role of metal ions is still under investigation, it actually may arise from homeostasis disorders, which, in turn, may be related to disorders of metal ions sensing by different cells. 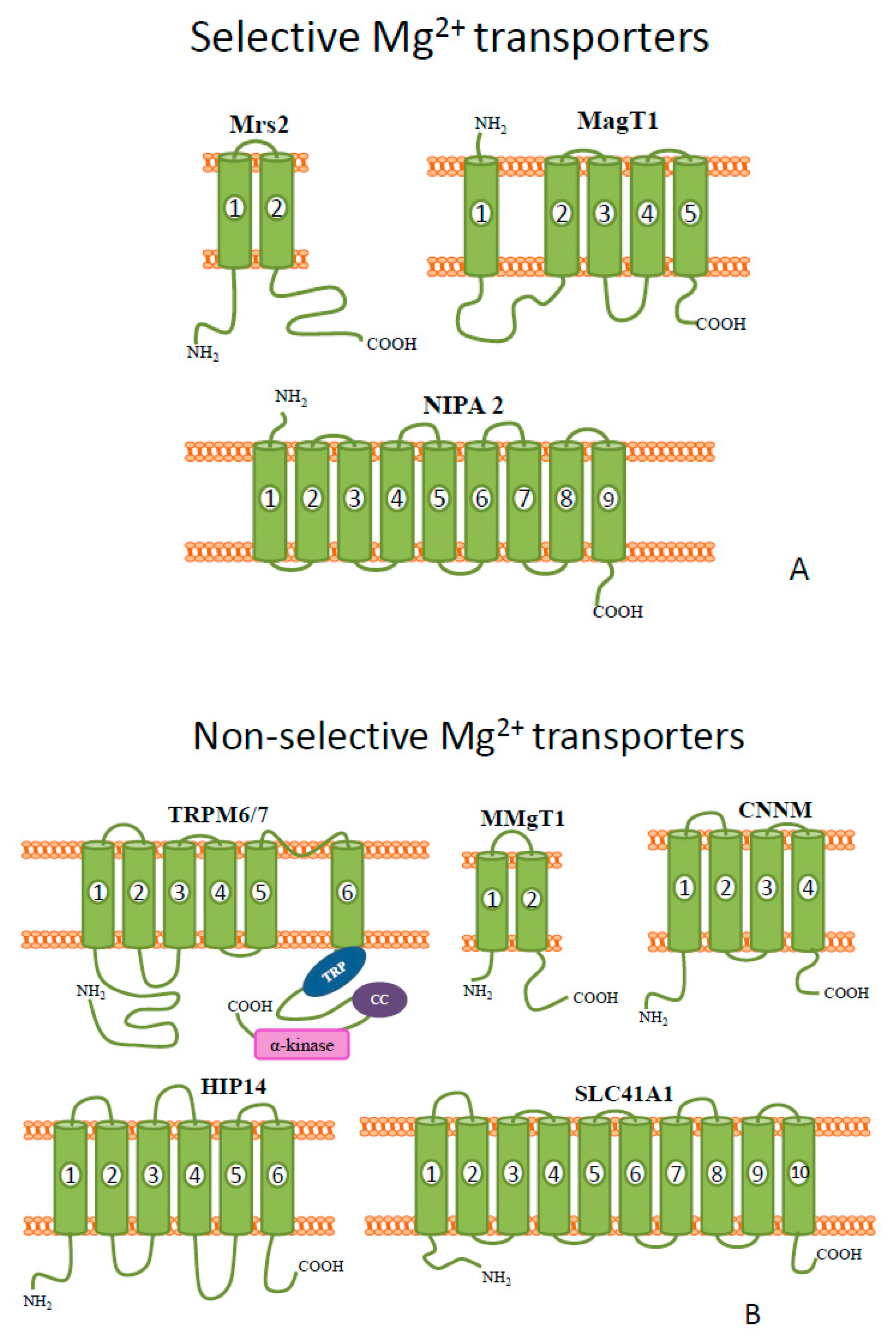 Figure 1. Schematic diagrams of the representative members of mammalian (A) selective and (B) non-selective Mg2+ transporters. 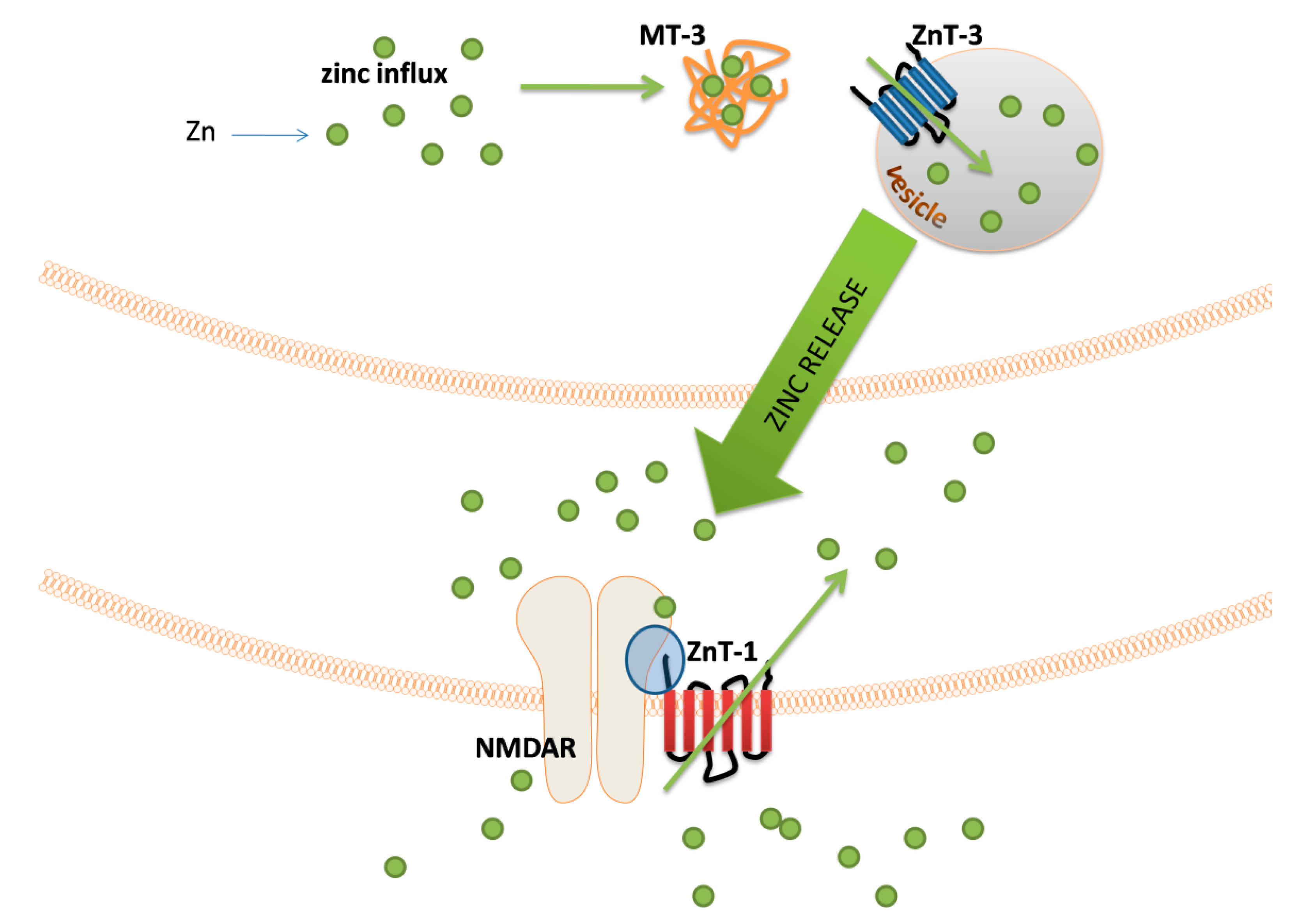 Figure 3. Schematic representation of the events related to the zinc signal release from zincergic synapses. After zinc influx, Zn2+ ions are bound by metallothionein 3 (MT-3). This protein delivers zinc to the zone where vesicles are formed. The influx of Zn2+ into the vesicle is catalyzed by ZnT-1 transporter. After release, Zn2+ appears in a synaptic cleft and diffuses through it. This phenomenon leads to the interaction of Zn2+ with postsynaptic N-methyl-D-aspartate glutamate receptor (NMDAR) and the influx of these ions into the postsynaptic nerve terminal. The level of Zn2+ in a postsynaptic neuron is regulated by the ZnT-1 transporter responsible for efflux of Zn2+ excess. The location of ZnT-1 in the membrane allows this transporter to interact with the GluN2A subunit of NMDAR (blue sphere). 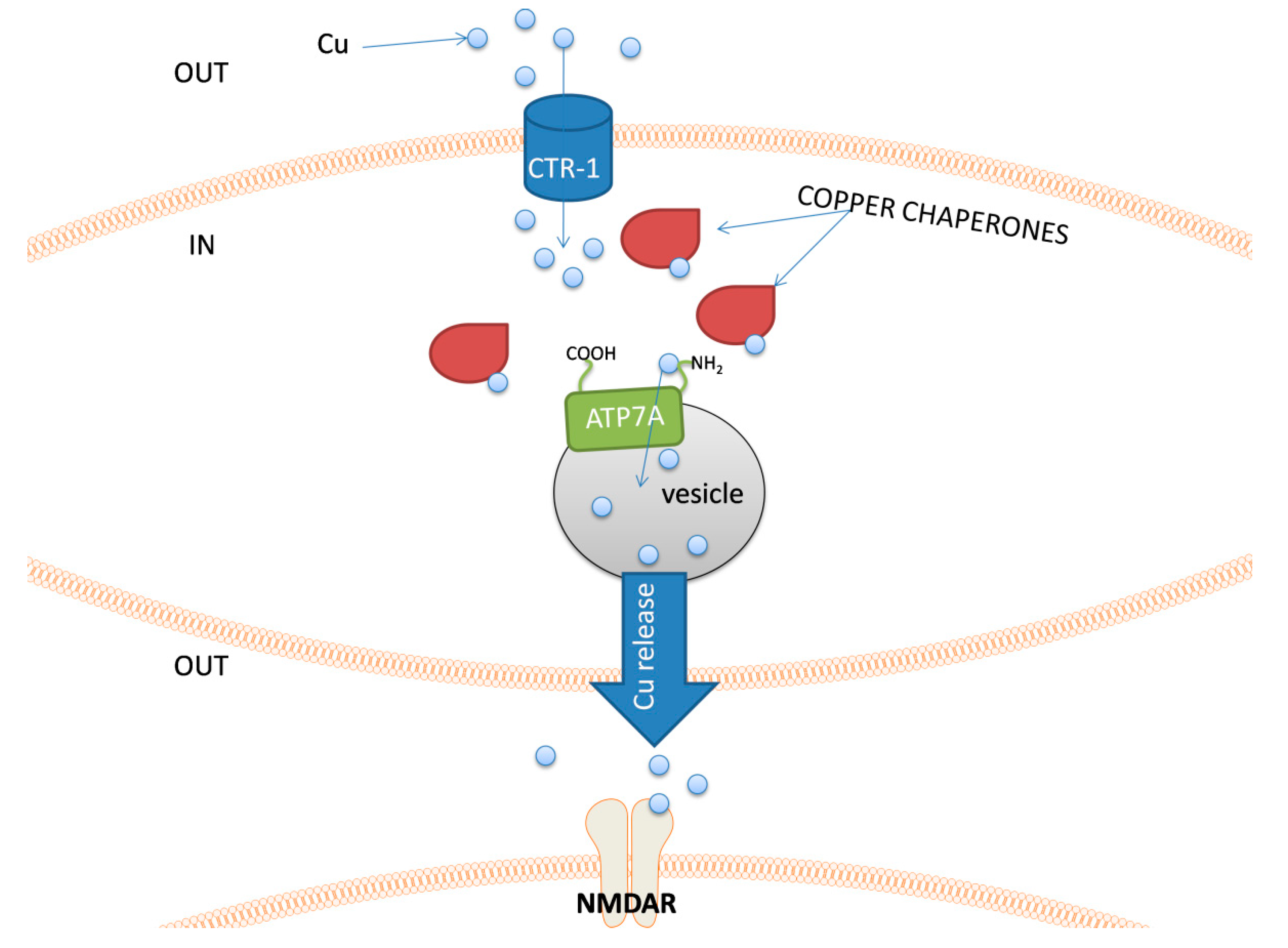 Figure 4. The schematic representation of an example sequence of events related to copper release possible in nerve cells. Copper ions are taken up to the cell by a Cu transporter 1 (CTR-1). The presence of free Cu+ ions immediately activates a set of copper chaperones. These proteins transport copper within the cell and deliver it to its destination. In neurons, that can release copper into the synaptic cleft, chaperones introduce copper ions to the ATP7A protein, which transport it to the lumen of a vesicle. After Cu release, it can interact with e.g., NMDAR. 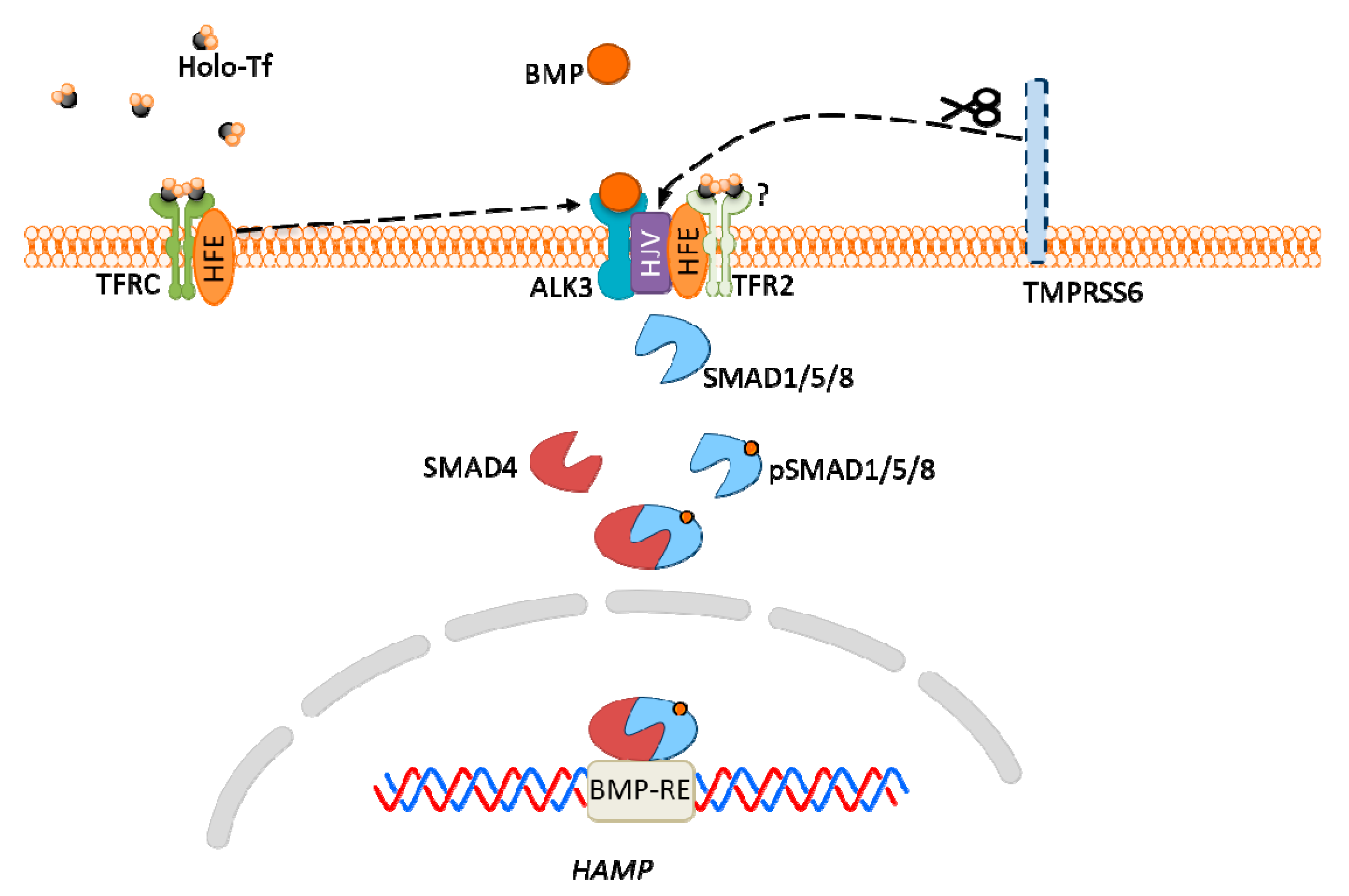 Figure 5. Hepcidin expression via bone morphogenic protein (BMP)-SMAD signaling pathway in hepatocytes. High iron concentration in plasma increases transferrin saturation, which results in homeostatic iron regulator protein (HFE) detachment from the transferrin receptor (TFRC)/HFE complex, then its interaction with ALK3 (BMP receptor), which leads to increased expression of ALK3 and activation of the BMP-SMAD signaling pathway. High plasma iron also causes stabilization of TFR2, which is associated with HFE, and may also interact with ALK3 (but this is not confirmed). Hemojuvelin (HJV) is a co-receptor for BMP, and TMPRSS6 protein cleaves HJV acting as an inhibitor of HJV expression.