It is getting more and more clear that cancer cell culture models are switching from two-dimension to three-dimensional, in order to better reflect in vivo situations where tumor cells have to cope with a highly interactive three-dimensional microenvironment. Several such culture models have been reported, predominantly multicellular tumor spheroids (MCTS) and patient-derived tumor organoids (PDTO). These are used both to investigate fundamental aspects of cancer development and as test systems for innovative therapies against gastric cancer, the fifth most common cancer and the third leading cause of cancer-related deaths worldwide. The authors review the actual state of research in this field to provide an overview of the contribution of MCTS and PDTO, especially in the areas of molecular profiling, drug discovery, pathogen infection, and personalized medicine.

Gastric cancer (GC) is the fifth most common cancer and the third leading cause of cancer-related deaths worldwide, according to data from Global Cancer Statistics 2018 [1]. Adenocarcinomas of the esophagogastric junction (AEG) overlap histologically with GC and constitute an entity with rising incidence rates [2][3]. Lauren's criteria are the most widely used to classify gastric adenocarcinomas, differentiating them histologically into intestinal and diffuse types [4]. Environmental factors such as Helicobacter pylori (H. pylori) infections, the greatest risk factor for GC [5], diet, and lifestyle are often associated with the intestinal type, while the diffuse type is more often associated with genetic abnormalities [6]. The Cancer Genome Atlas (TCGA) research network separated gastric adenocarcinomas into four different molecular subgroups: (i) positive for the Epstein–Barr virus (EBV) with frequent PIK3CA mutations and CDKN2A silencing, (ii) a microsatellite instable (MSI) subtype with a hyper-mutation phenotype, (iii) a genomically stable (GS) subtype displaying diffuse histology and frequent CDH1 and RHOA mutations, and iv) a chromosomal instable (CIN) subtype displaying aneuploidy and frequent mutations of TP53 as well as activation of the receptor tyrosine kinase (RTK)-RAS pathway [7]. The molecular characterization of AEG revealed their high similarity to the CIN subtype of GC [8]. The prognosis of GC is poor and most advanced forms of the disease still remain incurable [9]. Hence, GC treatment remains a major challenge and relies on surgical resection as the primary curative modality, i.e., for localized forms. Nonetheless, complementary approaches, such as neo-adjuvant and adjuvant chemotherapy (5-fluoruracil, oxaliplatin, docetaxel and epirubicin), have shown improved survival rates [10][11][12]. In addition, genetic alterations represent molecular targets for novel treatment options. So far, the only approved targeted therapies are: (i) anti-human epidermal growth factor receptor-2 monoclonal antibody "trastuzumab" and (ii) anti-vascular endothelial growth factor receptor-2 monoclonal antibody "ramucirumab" [13][14], while other therapeutic targets like Programmed cell Death protein 1 (PD-1) inhibition are under clinical investigation [15]. Although treatment effectiveness has improved during the past decade, GC survival rates remain poor [16]. This calls for an urgent need to develop innovative therapies available to GC patients.

The conventional in vitro cancer model used to screen novel therapies is the monolayer two-dimension (2D) cancer cell line (CCL) culture [17]. 2D culture models impose unnatural geometric and mechanical constraints by adhering cells to an artificial substrate (plastic or glass). Such a culture affects cell polarity and therefore, potentially, tumor phenotypes. Three-dimensional (3D) culture systems have been developed to better mimic the functional aspects of tissues [18]. This results from (i) the organization of cells in layers with different proliferation rates, (ii) the formation of diffusion gradients of nutrients, oxygen and metabolic wastes, (iii) the specifics of cell-cell interactions, (iv) the expression of specific genes and (v) induction of chemoresistance [19][20][21]. Several 3D culture models have been reported [22], predominantly multicellular tumor spheroids (MCTS) [23] and patient-derived tumor organoids (PDTO) [24][25].

MCTS models promote the formation of well-developed spheroids that resemble avascular tumor sites or micrometastatic regions in vivo [26]. Different co-culture approaches have been developed, including mixed populations of tumor cells and cancer associated fibroblasts (CAF), which showed increased ability to form spheroids [27]. Several studies validated the anticancer therapeutic potential of targeting the interactions between CAF and carcinoma cells [28]. However, using CCL to produce MCTS renders this approach hardly patient specific because most tumors contain highly heterogeneous subsets of cancer cells [29]. In vivo animal testing research is often employed for observing the effects on a living subject. The gold standard in vivo model for tumor development and analysis is patient-derived xenograft (PDX) [30]. Such a model conserves the clinical tumor architecture, the genotypic and phenotypic characteristics of the primary tumor as well as interactions with the microenvironment and the characteristics of patient's tumor, recapitulating the inter-tumor heterogeneity [31]. However this still does not provide immediate clinically actionable data [32]. In addition, their use is quite expensive and time consuming, and raises ethical issues, at times where alternative in vitro/ex vivo models are gaining momentum. These reasons make in vivo models unsuitable for routine testing purposes and encourage the application of 3D cultures that permit recapitulating several mechanisms of drug resistance found in tumors in vivo.

Huge efforts in preclinical personalized therapy testing were explored by the recent development of PDTO as ex vivo models of human cancers, including GC [33]. Organoids are 3D cultures of multiple organ-specific cells of different types that can retain the morphologies and gene expression profiles of their organs of origin [34]. Organoids enable drug screening for personalized therapies as they provide genotypic stability and constitute a valuable tool to study pathogen infections [35][36].

Since Sutherland et al. established MCTS in the 1970s [37], this model has been one of the most commonly explored and characterized among the currently available 3D in vitro tumor models [38]. MCTS are aggregates of CCL grown with or without scaffolds representing avascular tumor nodules or micro-metastases [39]. Spheroids with diameters larger than 400–500 µm sustain oxygen and nutrient gradients associated with specific functional domains (proliferative outer layer, quiescent intermediate layer, and the necrotic center) [40] (Figure 1). As a result, protein and gene expression profiles of MCTS are closer to those of tumors than 2D tumor cell cultures [41]. In addition, MCTS can be constructed from tumor cells alone or combined to other cell types that can produce an extracellular matrix (ECM). They can be used to analyze the influence of 3D-specific cell-cell interactions on tumor progression, cell invasion or angiogenesis. As such, they are well suited to recapitulate the complexity and the cellular heterogeneity of tumors, a hallmark of cancer that may explain resistance to chemotherapy and participate in metastatic invasion. Hence, different 3D-co-culture approaches have been developed to analyze the interaction of tumor cells, fibroblasts, stem cells, adipocytes, or other cells present in the tumor microenvironment and to study the influence of these interactions on tumor progression or cell invasion [42][43][44]. 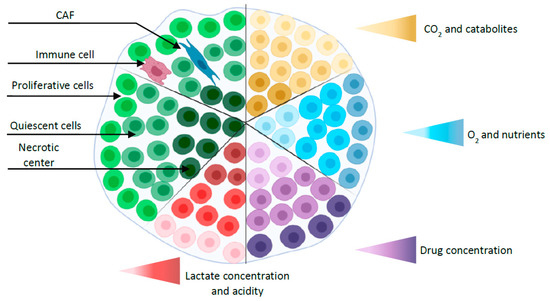 Figure 1. Simplified representation of a spheroid with different layers (proliferative outer layer, a quiescent intermediate layer, and the necrotic center) and gradients (oxygen, nutrients, CO2, catabolites, and drug concentration). Co-culture spheroid is represented by the addition of cancer-associated fibroblast (CAF) and immune cell.

Although generic approaches, such as MCTS models, have participated in improving GC treatment, patient survival rates remain poor and there is still an urgent need to develop novel effective therapies with a model that would allow taking into account the genetic make-up of the individual tumor and provide immediate treatment selection. So-called organoids are one relevant option, although there is still no consensus on the definition of ‘organoid' [34]. In general, organoids are in vitro 3D culture models grown from stem cells of primary tissues [45]. They can recapitulate key features and functions of their organs of origins such as architecture and gene expression profiles [46]. The many potential applications of this novel technology are beginning to be explored and used in many research areas, particularly in cancer research. The organoids co-culture approach can mimic the tumor immune microenvironment preserving T cell receptor and immune check point [47]. The first PDTO was established in 2011 when Sato et al. developed a long-term in vitro culture protocol for primary human epithelial cells isolated from small intestinal adenomas, metaplastic Barret epithelium and colon cancer tissues [48]. This innovation goes back to the identification of a particular intestinal stem cell marker, the leucine-rich repeat-containing G protein-coupled receptor 5 (Lgr5) by Barker et al. in 2007 [49]. Sato et al. next reported the first protocol that allowed establishing adult stem cells-derived organoids using Lgr5+ stem cells from intestinal crypts [50]. Since then, this protocol was applied to develop organoids from different organs including the pancreas [51], liver [52], esophagus [53], prostate [54], lung [55], breast [56], brain [45], and others [57]. Gastric organoids development was based on the localization of highly proliferative Lgr5+ gastric stem cells at the base of pyloric glands [58], shortly after the identification of Lgr5 as an intestinal stem cell marker [49]. This identification was facilitated by the fact that the gastric epithelium, like the intestinal epithelium, is constantly renewed and filled with rapidly proliferating stem cells. Stange et al. found, at the gland base of the gastric corpus, specialized chief cells marked by ‘Troy'. They demonstrated that a single Troy+ chief cell could generate gastric organoids [59]. In the following, we describe briefly the culture of patient-derived gastric cancer organoids (PDTO) and review important findings from organoids applications in GC studies.

Gastric organoids can be established from normal and cancerous gastric tissues. They are embedded into an ECM (matrigel) in a manner that recapitulates 3D in vivo conditions [58][60]. Methods used for culturing organoids from normal tissues have been adapted to successfully produce organoids from several human cancers [61]. PDTO can be propagated from surgical tumor specimens or endoscopic biopsies [62] (Figure 2). In general, protocols used to culture gastric organoids start from rinsing and mincing tumor tissues into small pieces (2–5 mm3). Released tumor cells from bulk tissues are then resuspended in matrigel [63] and overlaid with culture medium supplemented with essential components such as epidermal growth factor (EGF), noggin, R-spondin1, Wnt, fibroblast growth factor (FGF), gastrin, transforming growth factor (TGF), nicotinamide, insulin-like growth factor (IGF), and p38 inhibitor glycogen synthase kinase (GSK) [64]. These supplements make organoids culture environments very complex and different from conventional 2D culture media, which may limit strict comparisons in cell behavior. Gastric organoids tend to have a conserved architecture, with gastric glands budding around a central lumen [34]. However, contamination by epithelial and stromal cells, as well as the scarcity of cancer cells, represent a major challenge in culturing PDTO [59][65]. Primary PDTO appear like a mosaic of normal and cancer cells. Mechanical or enzymatic disruption allows passing organoids to maintain the culture for many months and even be cryo-preserved. In addition, PDTO biobanks were created either from primary [60][66] or metastatic tumors [67]. These biobanks offer a biological access to human GC, facilitate drug screening, validate biomarkers, and enable personalized medicine. However, statistical issues are raised, since too small a repertoire of banked cells might not be representative enough of the genetic heterogeneity of GC. 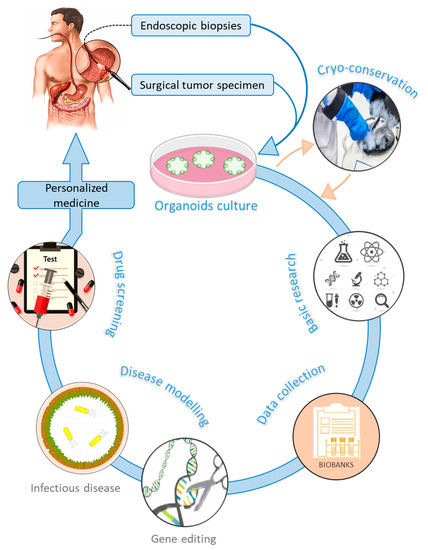 Here, we attempted to provide an overview of the development of the major 3D cell culture models of human GC. This rapidly evolving field, which comprises mainly spheroid and organoid structures, aims at providing an ex-vivo alternative to the quite demanding and expensive PDX in vivo system. Hence, MCTS systems are well suited to analyze the interactions between the cells that compose the tumor, including CSC, CAF, immune and endothelial cells. As such, they are also convenient to analyze the effects of cytotoxic drugs, as well as to identify novel biomarkers. Alternatively, organoids have proven quite useful to address issues such as the contribution of PD-L1/PD1 from immune cells to the susceptibility to infection by helicobacter pylori or the specific roles of genes and gene pathways in gastric tumorigenesis and the response of cancer cells to chemotherapeutic drugs. Hence, these ex-vivo cell culture systems already represent plausible alternatives to PDX or to other animal models. Still, harmonization of techniques is needed to ensure better data reproducibility from the use of 3D models, before these can be seen as the gold standard for the preclinical screening of therapeutic strategies for GC.