The incidence of obesity and colorectal cancer (CRC) has risen rapidly in recent decades. More than 650 million obese and 2 billion overweight individuals are currently living in the world. CRC is the third most common cancer. Obesity is regarded as one of the key environmental risk factors for the pathogenesis of CRC. In the present review, we mainly focus on the epidemiology of obesity and CRC in the world, the United States, and China. We also summarize the molecular mechanisms linking obesity to CRC in different aspects, including nutriology, adipokines and hormones, inflammation, gut microbiota, and bile acids. The unmet medical needs for obesity-related CRC are still remarkable. Understanding the molecular basis of these associations will help develop novel therapeutic targets and approaches for the treatment of obesity-related CRC.

Obesity is associated with various metabolic disorders [1], such as diabetes, non-alcoholic fatty liver diseases, cardiovascular diseases, hypertension, and obstructive sleep apnea syndrome, as well as with some cancers [2][3][4], including esophageal adenocarcinoma, multiple myeloma, cardia cancer, colorectal cancer (CRC), cholangiocarcinoma, pancreatic cancer, breast cancer, endometrial cancer, ovarian cancer, and renal cancer. Obesity is closely related to increased incidence and progression of these cancers, and it is estimated to cause about 20% cancer-associated deaths [5][6].

2. The Epidemiology of Obesity and CRC

2.1. The Epidemiology of Obesity 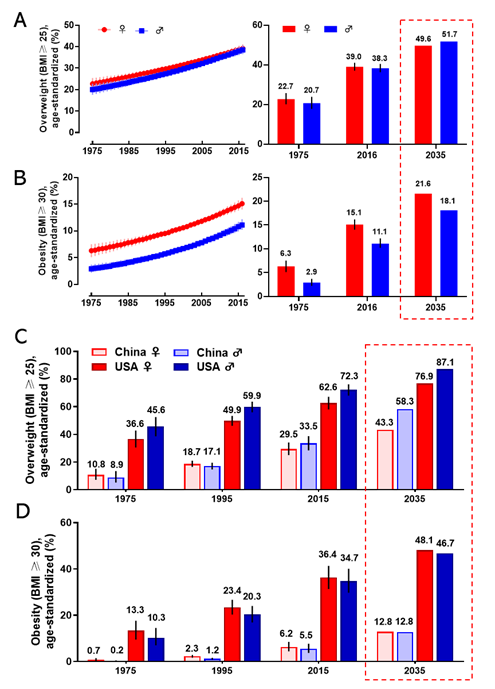 2.2. The Epidemiology of Colorectal Cancer

CRC is the third most prevalent cancer and is also the third leading cause of cancer-associated death globally in both men and women from the 1980s [9][10]. In 2018, there were 1.8 million new CRC cases, causing 0.86 million deaths worldwide, according to global cancer statistics [11]. Currently, there are more than 1 million CRC survivors in America. Based on American Cancer Society statistics 2020, the estimated numbers of new CRC cases and deaths in the United States are approximately 150,000 and 54,000, respectively [9]. Global Burden of Disease Study 2017 (GBD 2017) reported the numbers of incident cases and deaths of CRC globally, in the USA, and China from 1990 to 2017, as shown in Figure 2. We observed that in 1990, incident cases and deaths of CRC are about 107,000 and 76,000 in China, and about 432,000 and 200,000 in 2017, respectively [12]. Over the past 27 years, the incidence cases of CRC have doubled worldwide, and been increased three times in China. The unmet medical needs of CRC have been a growing public health issue.

Growing epidemiological data indicated a strong positive correlation between obesity and colorectal carcinogenesis [13][14][15]. General obesity causes a higher risk of colon cancer in males compared to females, and it has a stronger association with colon cancer than rectal cancer in both genders [16][17]. Dose-response meta-analysis reported that body weight gain of 10 kg was accompanied by approximately 8% increased risk of CRC [18][19]. Early-life obese individuals are at greater risk of developing CRC in adulthood [20]. As expected, body weight loss by bariatric surgery reduces about 27% risk of CRC [21][22]. Understanding the association between body weight and the risk of CRC is essential to guide body weight management for CRC patients.

Nieman et al. reported [26] that intra-abdominal tumors are more likely home to and proliferate in the omentum majus, which is an organ mainly composed of white adipocytes. Adipocyte-tumor cell coculture induces lipolysis in adipocytes and β-oxidation in tumor cells, resulting in the rapid proliferation of tumor cells. An emerging concept in cancer metabolism is that the adipocytes surrounding tumors provide energy or nutrients for the anabolic growth of cancer cells [27][28][29]. We validated this concept by observing more adipocytes surrounding colorectal tumor tissues than normal tissues in clinical pathological sections [30]. In in vitro experiments, we found adipocyte-conditioned medium promotes proliferation and migration of colon cancer cells (SW480 and C26) through retinoic acid-related orphan α (RORα), which is a lipid metabolism-associated nuclear receptor [30]. Sadahiro et al. reported that primary adipocytes, preadipocytes, and adipose tissues enhanced the growth of colon cancer cells (CACO-2, T84, and HT29) in the cocultured system [31]. Adipocytes are part of tumor microenvironment. It is domesticated to produce and transfer energy-rich metabolites to tumor cells, including free fatty acids, glutamine, ketones, and L-lactate, and promote the growth and migration of tumors [29]. The summarized crosstalk between CRC cells and adipocytes in nutriology is shown in Figure 3. CRC cells domesticate adipocytes which supply energy or nutrients to cancer cells for further rapid growth. Figure 3. The crosstalk between CRC cells and adipocytes in nutriology.

Cancer cachexia (CC), also known as wasting syndrome, is characterized by weight loss in cancer patients. It is caused by tumor factors and regulated by catabolic metabolism [32]. This complex multifactorial metabolic syndrome often accompanies increased lipolysis in adipose tissues. A total of 54% of colon cancer patients suffer from CC that causes about 20% of cancer-associated deaths [33][34]. It might be a piece of evidence that adipose tissues provide nutrients for tumor growth in systemic nutriology.

Understanding the role of adipocytes in tumor microenvironment is critical to the discovery of new strategies. Targeted blocking energy transfers might be novel therapies for the treatment of CRC.

Adipose tissues have long been thought to be energy storage tissues as the body accumulates excess nutrients and to resist cold temperature [35]. It is currently regarded as a highly active endocrine or metabolic organ [36]. It liberates more than twenty kinds of hormones and adipokines, such as estrogens, insulin, insulin-like growth factors (IGFs), leptin, adiponectin, apelin, visfatin, resistin, chemerin, omentin, nesfatin, vaspin, inflammatory cytokines (e.g., tumor necrosis factor-alpha (TNF-α), chemokine (C-C motif) ligand 2 (CCL2), plasminogen activator inhibitor-1(PAI-1), and the interleukin families (e.g., IL-1β, IL-6, IL-8, IL-10, IL-27, and IL-31). The related adipokines and hormones and their functions in the development and progression of CRC are introduced below.

The insulin/IGFs system is a major driver in the pathogenesis of CRC. This system consists of insulin, insulin receptor (IR), IGF-1 and -2, IGF-1 receptor (IGF-1R), IGF-binding protein (IGFBP)-1 and -2, and IR substrates (IRS) 1 and 2 [37]. Overweight generally increases the levels of insulin and IGF-I and decreases the levels of IGFBP-1 and IGFBP-2 in serum [38]. Insulin and IGFs have been reported to promote the proliferation of HCT116 and HT29 colon cancer cell lines through activation of the phosphoinositide 3-kinase (PI3K)/Akt signaling pathway [39][40][41]. PI3K/Akt signal pathway is an important therapeutic target for treating colon cancer [42][43]. Tyrosine-protein kinase Src is a non-receptor tyrosine kinase encoded by the SRC gene in humans [44]. It regulates PI3K/Akt pathway through phosphorylation of PI3K. Src also plays a critical role in the transformation and growth of CRC cells. Knockdown or inhibition of Src inhibited cell metastasis and proliferation in human cancer cells SW480 and HT29 [45][46]. Phosphorylated IR (pIR) was highly expressed in low-grade colorectal adenocarcinoma, which indicated activation of IR is an early event in CRC tumorigenesis [47]. The expression levels of IGF1 and IGF-1R were increased in colorectal carcinomas, compared with normal colonic mucosa. Overexpression and activation of IGF1-R can activate Src, leading to elevated proliferation and migration of colon cancer in vitro [48]. Renehan et al. reported that IGF-2 SD scores (SDS) were slightly increased in CRC patients compared to healthy controls, and it showed a more dramatic increase in advanced colonic carcinomas compared with earlier stages, but the scores dropped down immediately after curative resection. Taken together, the insulin and IGFs system plays an important role in the pathogenesis and prognosis of CRC through independent or joint signaling networks.

Adiponectin is a protein hormone encoded by ADIPOQ gene in humans [62]. It is one of the most abundant hormones released from adipose tissues and performs an essential function in obesity-associated cancers. The expression and circulating levels of adiponectin are reduced in most obese individuals and animal models of obesity [63][64][65]. Epidemiology studies showed that decreased plasma adiponectin levels are inversely correlated with the risk of colon cancer [66][67]. Adiponectin knockout (APNKO) mice exhibited more tumor numbers and areas in dextran sodium sulfate (DSS)  and  1,2-dimethylhydrazine (DMH) induced colon cancer model through increasing the differentiation from epithelial cells to goblet cells and inhibiting goblet cell apoptosis. It indicated that adiponectin protected against chronic inflammation-induced colon cancer [68]. High-fat diet treated mice had more and larger colorectal tumors than chow-diet mice. Adiponectin administration decreased tumor growth through inhibiting angiogenesis [69][70]. In vitro experiments, adiponectin inhibits colon cancer cell growth in adiponectin receptor (AdipoR1- and -R2) positive HCT116, HT29, and LoVo cells through the AMP-activated protein kinase (AMPK)/mammalian target of rapamycin (mTOR) signaling pathway [71][72]. Moon et al. demonstrated that adiponectin directly regulated cell proliferation, migration, adhesion, and colon formation through regulation of metabolism, inflammation, and cell cycle in MCA38, HT29, HCT116, and LoVo cells [69]. These results indicate the potential inhibitory effect of adiponectin on the development of CRC. Together, leptin and adiponectin generally show opposite molecular effects on obesity and cellular behaviors. They are relevant but reverse players in obesity-related CRC.

It is well established that estrogen contributes to obesity-associated hormone-responsive cancers, especially breast cancer [73][74]. The role of estrogen in obesity-associated CRC is complicated. First, estrogens have been found to reduce the risk of CRC [75]. Hormone replacement therapy confers protection against CRC, especially for lean women, as indicated by epidemiological data [76]. Estrogen replacement therapy in postmenopausal women reduces CRC-related mortality [77]. These cohort studies indicated estrogens may play a protective role in the pathogenesis of CRC. Interestingly, adipose tissues are also partial source of estrogen in addition to ovaries. Plasma estrogen levels are increased in obese men and postmenopausal women, because adipose tissue aromatase transforms androgenic precursors to estrogens [78]. However, several studies have shown that high BMI increased the risk of CRC in men and premenopausal women, but not postmenopausal women [79][80]. Adiposity also positively correlates with blood insulin, leading to increased IGF-1. The inducible effect of insulin/IGF-1 axis on CRC appears to be compromised by estrogen released from adiposity in postmenopausal women. In premenopausal women, the primary source of estrogen is ovary compared to adiposity. Thus, more hormone supplement cannot provide more benefits [81]. This concept has been suggested by several cohort studies showing a positive correlation between BMI and CRC risk in younger women (<55-year-old) but not in older women [80][82]. This association was further confirmed by the study subjected between BMI and CRC risk in premenopausal and postmenopausal women. The risk of CRC in postmenopausal women is independent of BMI [83]. Although the relationship among hormones, obesity, and CRC is not fully understood, these observations and reasonable speculation emphasize the same importance of weight control in both genders.

The effect of estrogen is mediated by its receptors, estrogen receptor (ER)-α and ER-β. The expression of ER-α is very low in normal colorectal tissues. However, the ER-α expression is increased with the development of colon cancer, and it positively correlates with CRC stages and worse survival . ER-β is enriched in colon tissues [84]. The expression of ER-β is lower in colon tumor tissues compared with normal tissues and inversely correlates with the progression of CRC [85][86]. ER-β overexpression induced cell-cycle arrest and inhibited cell proliferation and tumor growth in SW480 cells and mouse xenografts model [87]. In the ApcMin/+ mouse model, estrogen treatment protected against CRC and increased the ratio of ER-β to ER-α [88]. Ablation of ER-β in ApcMin/+ mice significantly increased tumor formation, and treatment with estrogen could not prevent this phenotype [89]. These results indicate that ER-β is responsible for the protective effect of estrogens on colon tumorigenesis.

We summarize the signaling pathways of obesity-secreted adipokines and hormones in the pathogenesis of CRC (Figure 4). 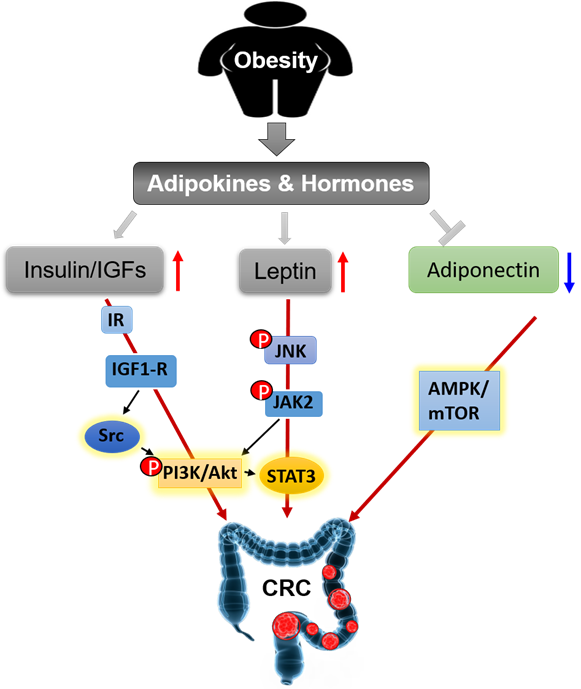