Levulinic acid (LA) is considered as one of the “Top 10” building blocks for future bio-refineries as proposed by the US Department of Energy. It is  one of the most important platform molecules for the production of fine chemicals and fuels based on its compatibility with existing processes, market economics, and industrial ability to serve as a platform for the synthesis of important derivatives. Hydrogenation of LA to produce γ-valerolactone (GVL) is an active area of research due to the potential of GVL to be used as a biofuel in its own right and for its subsequent transformation into hydrocarbon fuels. This paper contains a new design for a simple, cost effective, and safe hydrogenation reactor for the transformation of levulinic acid to γ-valerolactone (GVL) by utilizing high boiling point organic fluid. The hydrogenation reactor is composed of a heating source—organic fluid (called “DOWTHERM A” or “thermex”) and the catalytic reactor. The advantages of high boiling temperature fluids, along with advances in hydrocracking and reforming technologies driven by the oil and gas industries, make the organic concept more suitable and safer (water coming in contact with liquid metal is well understood in the metallurgical industry to be a steam explosion hazard) for heating the hydrogenation reactor. COMSOL multi-physics software version 4.3b was applied in this work and simultaneously solves the continuity, Navier-Stokes (fluid flow), energy (heat transfer), and diffusion with chemical reaction kinetics equations. It was shown that the heat flux supplied by the DOWTHERM A organic fluid could provide the necessary heat flux required for maintaining the hydrogenation process. It was found that the mass fractions of hydrogen and levulinic acid decreased along the reactor axis. The GVL mass fraction increased along the reactor axis.

The utilization of biomass for the production of fuel and chemicals has become an important research topic because of the growing concerns regarding the depletion of fossil carbon reserves and the environmental impact (such as air pollution) of our continued dependence on these resources [1]. Levulinic acid (LA) is ranked as one of the “Top 10” building blocks for future bio-refineries as proposed by the US Department of Energy [2]. It is considered as one of the most important platform molecules for the production of fine chemicals and fuels [3] based on its compatibility with existing processes, market economics, and industrial ability to serve as a platform for the synthesis of important derivatives. Hydrogenation of LA to produce γ-valerolactone (GVL) is an active area of research due to the potential of GVL to be used as a biofuel in its subsequent transformation into hydrocarbon fuels [4].  GVL is considered as a sustainable liquid since it is renewable [5]. It has several very attractive physical and chemical properties [6]. Its vapor pressure is remarkably low, even at elevated temperatures and it does not hydrolyze at neutral pH. GVL is a safe material for large-scale use and can be utilized for the production of energy by adding it to gasoline [5]. Bereczky et al. showed that GVL significantly reduced the exhaust concentration of CO, unburned fuel, and smoke. The smoke reduction was particularly notable in light of the very recent suggestion that black carbon was the second most important greenhouse gas in the atmosphere next to carbon dioxide [7]. Licursi et al. [8] have studied and optimized cascade strategy for the catalytic valorization of levulinic acid. Their study has been carried out applying water as the only reaction solvent and heterogeneous commercial catalytic systems, which are more economical, available, and reproducible. Figure 1 shows the conversion processes of LA to a GVL and GVL to 2-Butanol and 2-Pentanol biofuels. 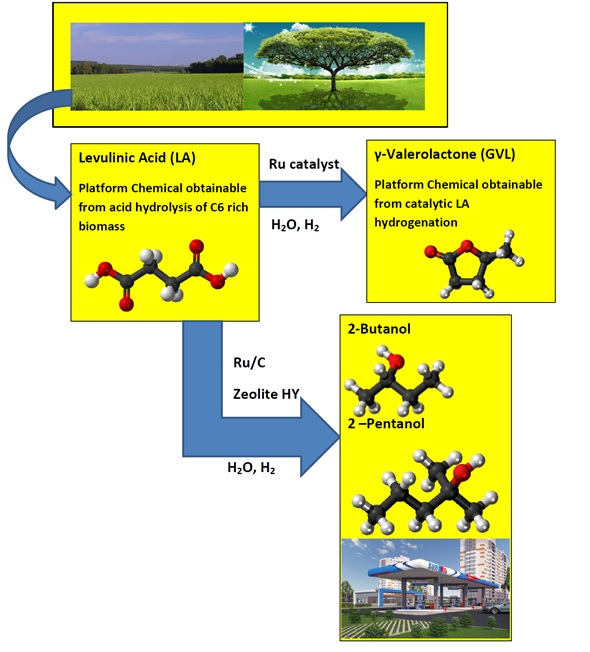 The hydrogenation of LA to GVL has been described by using both homogeneous and heterogeneous catalysts [9]. Filiz et al. [10] studied the catalytic hydrogenation of LA over zirconia supported ruthenium catalysts. They prepared four different Ru/ZrO2 catalysts with different pre-treatments and used different zirconium supports. They discovered that one of the catalysts produced a yield of more than 99% of GVL under mild conditions. This catalyst was also robust and could be recycled at least four times without any loss in activity or selectivity. It was shown that the activity can be attributed to the presence of small ruthenium particles together with acidic sites on the catalyst [10]. Figure 2 shows the schematic of the hydrogenation reactor of LA to GVL. 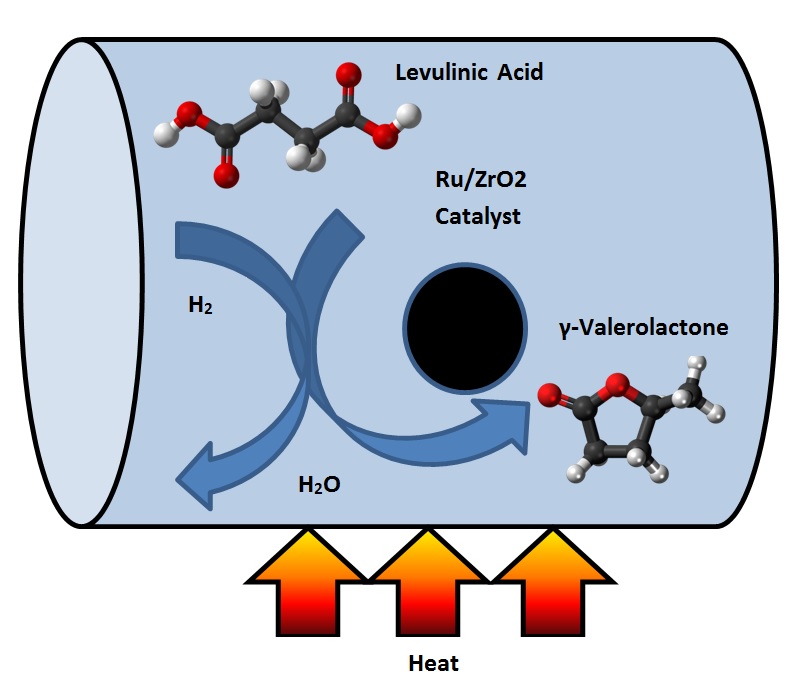 Figure 2. Schematic of the conversion process of levulinic acid (LA) to γ-valerolactone (GVL).

Ftouni et al. [11] compared the stability of different supported Ru-based catalysts under typical LA hydrogenation conditions in dioxane. It was shown that Ru/ZrO2 performed better than Ru/C and Ru/TiO2. The former catalyst materials displayed high activity, selectivity, and stability upon repetitive recycling. The hydrogenation reaction was studied at the hydrogen pressure of 30 bar and temperature of 423 K in dioxane as the solvent. All catalysts showed excellent yields of GVL when used fresh, but only the Ru/ZrO2 catalyst could maintain these high yields upon multiple recycling. The widely used Ru/TiO2 catalyst already showed quick signs of deactivation after the first catalytic test. The partial deactivation was due to the partial coverage of the Ru nanoparticles. In contrast, the zirconia support displayed high morphological and structural stability even after five recycling tests. In the fresh Ru/ZrO2 catalyst, Ru was found to be fully atomically dispersed on the fresh catalyst even at 1 wt % Ru loading, with some genesis of Ru nanoparticles being observed upon recycling. Further studies with the Ru/ZrO2 catalyst showed that dioxane could be readily replaced by more benign solvents including GVL itself. The addition of water promotes the selective hydrogenation reaction.

Wensel et al. [12] performed a computational fluid dynamics (CFD) simulation on the bio-refinery process for succinic acid and co-product. The finite volume method (FVM) technique was employed in the CFD simulation. The simulation included kinetic, stoichiometric, mass, and energy balance equations in order to simulate the effects of inlet temperature impeller speed, diameter, and spacing, inlet temperature, and fermentor volume on the fermentor cooling jacket heat transfer area. Predicted dissolved carbon dioxide concentrations in the fermentor had good agreement with those reported in the literature. The effects of the microfiltration recirculation rate, microfiltration stage numbers, and absorber sorbent particle diameter on the dimensional requirements and power consumption have also been considered. Yields and estimated volume and area requirements for the units of operation were obtained for the baseline process. Their work represents the first reported industrial-scale bio-succinic acid process model. Gorshkova et al. [13] performed a three phase CFD model for trickle bed reactors. Their model was extended to include reactions, mass transfer, and heat transfer. The stationary gas and liquid inside the porous particles were modeled separately from the bulk gas and liquid phases flowing outside the particles with convective and diffusive mass transfer between the inner and outer fluids. It was assumed that the catalytic reactions took place inside the catalyst particles. The process modeled in this work was the hydrogenation of octane (C8H16) in a Ni/Al2O3 reactor. The reaction is highly exothermic, resulting in the evaporation and condensation of the components. All sub models were implemented in Fluent software (version 12.1). Numerical tests were carried out to show that the CFD model allows for the investigation of local variations in the reactor, which are caused, for example, by bed drying or the effects of irregular liquid feed. 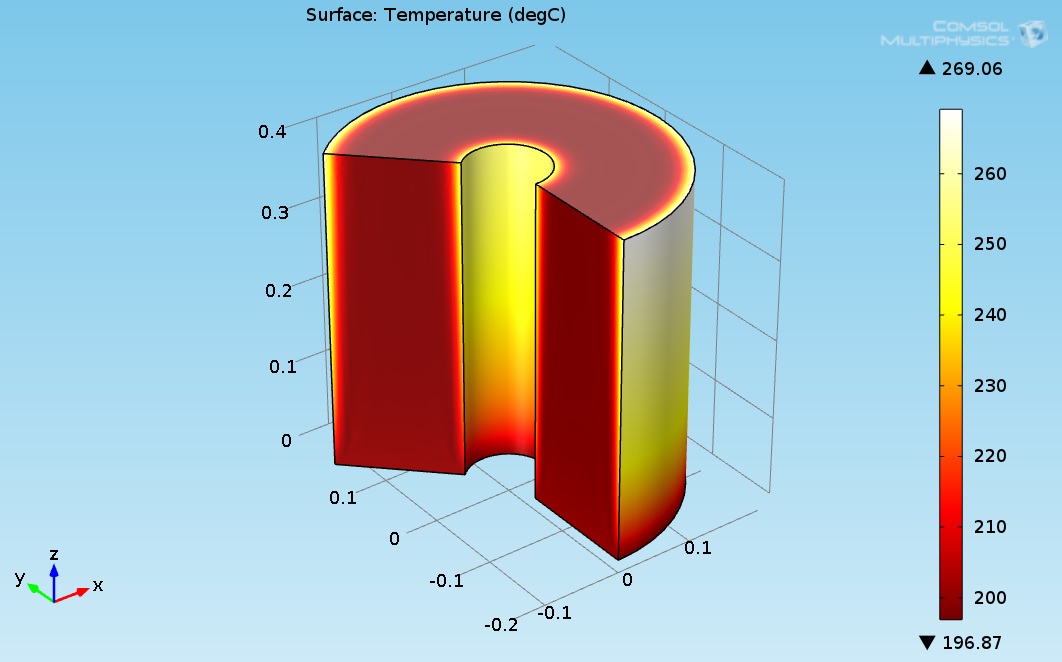 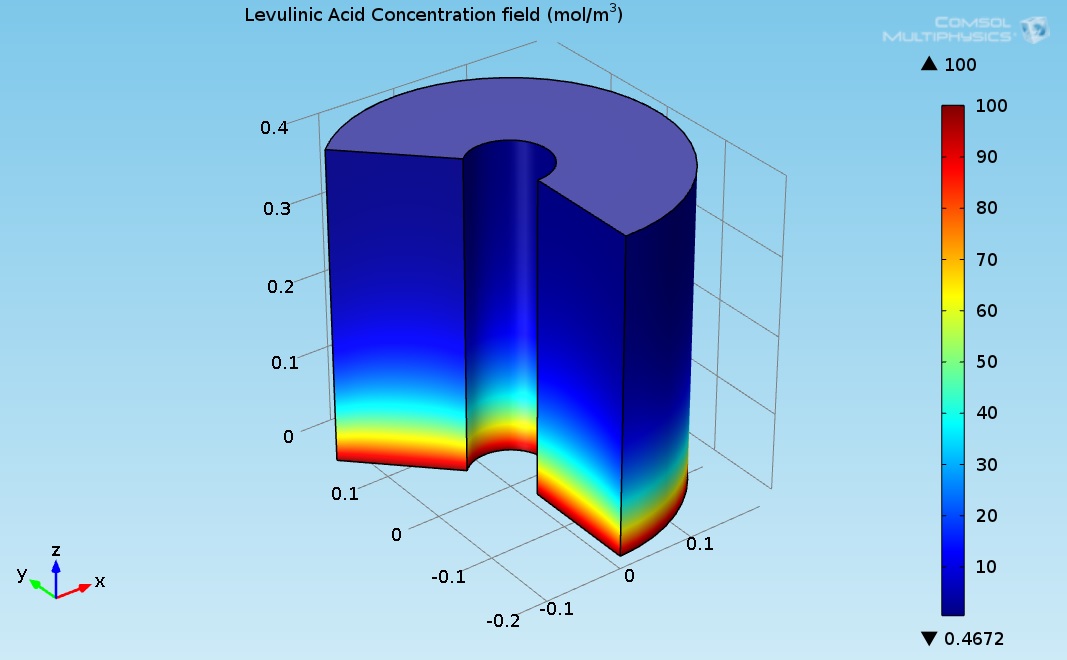 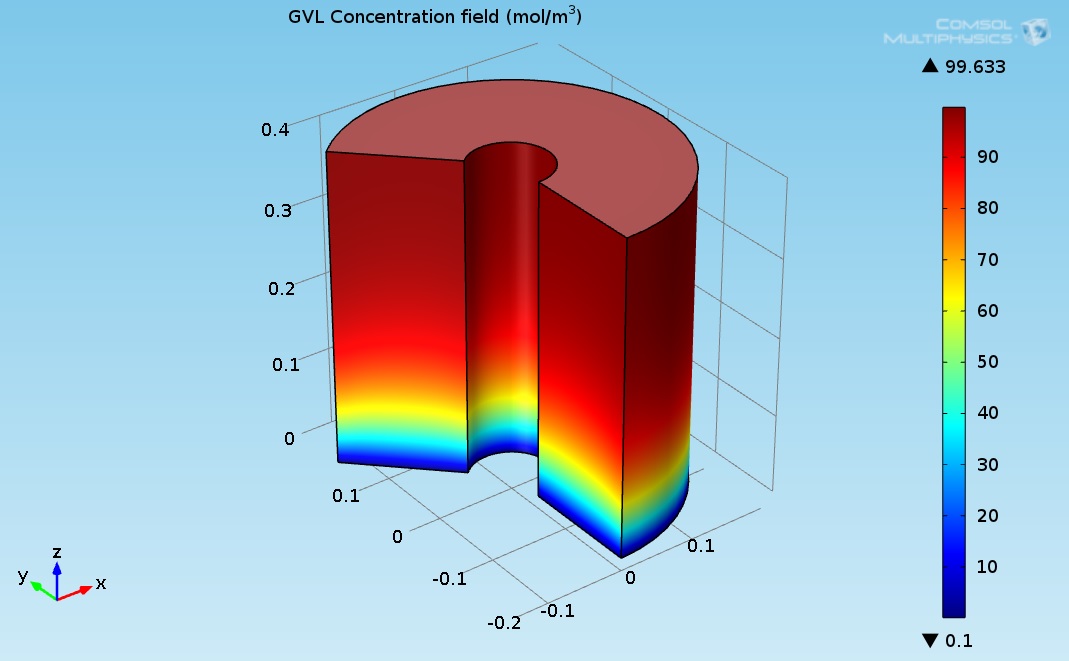 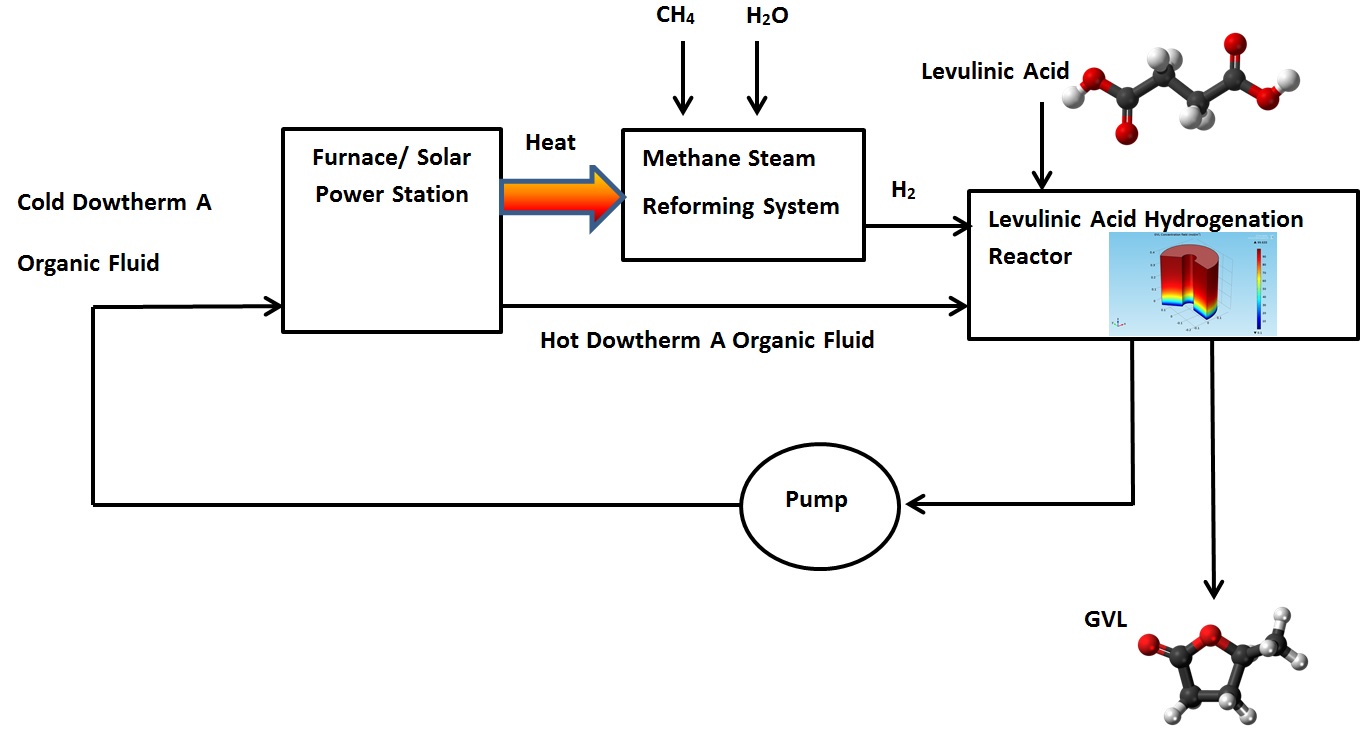 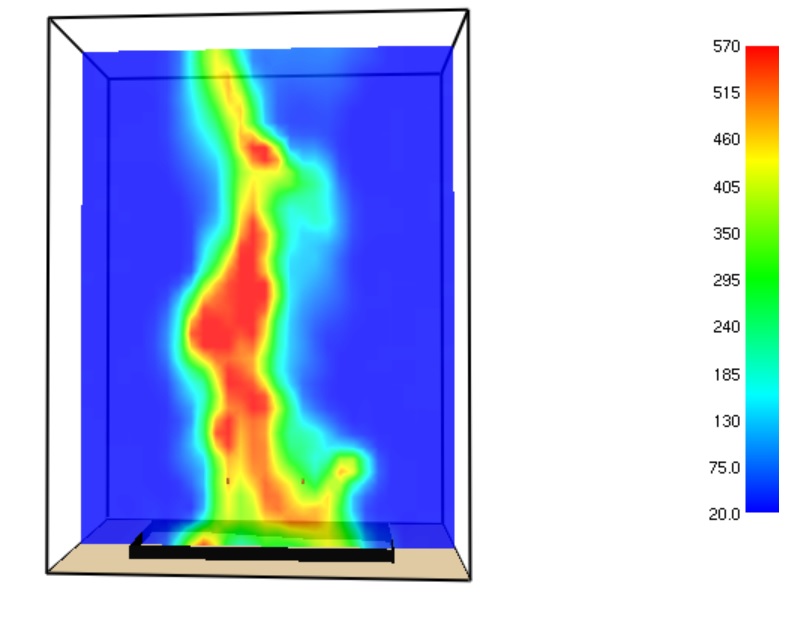 The maximal temperature of the GVL flame obtained at time = 42.1 s approaches to 570 °C.