CAR T cells can be generated from the patient’s own T cells or those from healthy donors. The autologous CAR T cells are patient-specific, but it is a challenge to produce them for a subpopulation of cancer patients, and the production platform is currently inefficient for large-scale clinical applications[1]. To avoid these problems, multiplexed genome editing strategies have been used to knock out certain endogenous genes, such as αβ T-cell receptor (TCR), in donor T cells to generate allogeneic universal CAR T cells[2][3], which can be produced massively and applied to treat a large number of patients[2]. The elimination of the αβ TCR is critical for avoiding the graft-versus-host-disease (GVHD) risk in cancer patients[4]. Previous studies have shown that the elimination can happen in cells with T cell receptor-α constant (TRAC) mutation or be achieved through TRAC knockout[3][5]. One of the promising approaches to gene knockout is to deliver the CRISPR/Cas9 system into cells using electrotransfer technology[6].

The technology has been used for the delivery of various molecular cargo into cells, such as DNA, RNA, protein, and ribonucleoprotein (RNP)[7][8]. It can be applied to all cell types and has few restrictions on the type of molecular cargo being delivered[7]. Moreover, electrotransfer is easy to operate and can be readily scaled up for producing a large amount of cells needed for cell therapy in the clinic[7]. Recently, electrotransfer has been employed in the production of CAR T cells in a clinical trial[9]. Despite these advantages, electrotransfer may result in severe cell death[9][10]. The viability of human primary T cells in gene electrotransfer experiments is highly dependent on the donors, varying from 20% to 40% under optimized experimental conditions for achieving adequate electrotransfer efficiency (e.g., 40%)[10][11][12]. The low viability is a major issue that needs to be tackled before the technology can be applied successfully to manufacturing CAR-T cells.

To demonstrate the capability of caspase inhibition for improving CAR T cell production, we treated human primary T cells with a pan-caspase inhibitor, z-vad-fmk, after pDNA or RNP electrotransfer. Our data showed that although the compound was nontoxic to T cells, it became highly toxic when the treatment is combined with electrotransfer. At the concentrations that worked for improving electrotransfer in Jurkat cells, the treatment with z-vad-fmk killed the majority of human T cells. Even at 0.5 µM, which was 100 times lower than the optimal concentration for Jurkat cells, the inhibitor treatment still killed approximately half of the T cell population, compared to the untreated controls. To reduce the toxicity caused presumably by non-specific inhibition of all caspases, we tested inhibitors more specific to caspase 3, such as z-devd-fmk and Ac-devd-cho. We observed that both inhibitors could increase the T cell viability by ~30% at the optimal treatment concentrations, compared to the matched controls (Figure 1A). Inhibition of caspase 3 in human T cells with z-devd-fmk treatment at 20 µM could effectively enhance the electrotransfer efficiency (Figure 1B–D). The treatment of T cells with Ac-devd-cho resulted in insignificant or minor changes in the electrotransfer efficiency (Figure 1B–D).

Further, we tested the effect of caspase 3 inhibition on improving TRAC knockout efficiency in human primary T cells. We electrotransferred an RNP, a complex of Cas9 protein and TRAC-targeting sgRNA, into human T cells, followed by the treatment of the cells with either inhibitor (z-devd-fmk or Ac-devd-cho) at 20 µM or equal amount of solvent (DMSO or H2O). The TRAC editing in T cells was confirmed using ICE analysis (Figure 2A,D), and the indel was determined using the TIDE analysis. At 24 h post electrotransfer, the inhibition of caspase 3 with z-devd-fmk or Ac-devd-cho treatment increased T cell viability from 57% to 71%, or from 57% to 68%, respectively, compared to the matched controls (Figure 2B,E). The same treatments insignificantly alter the indel quantified at 48 h post electrotransfer (Figure 2C,F). These data demonstrated that inhibition of caspase 3 could effectively increase the total number of gene-edited human T cells by means of increasing cell viability without decreasing the percent of gene-edited cells. 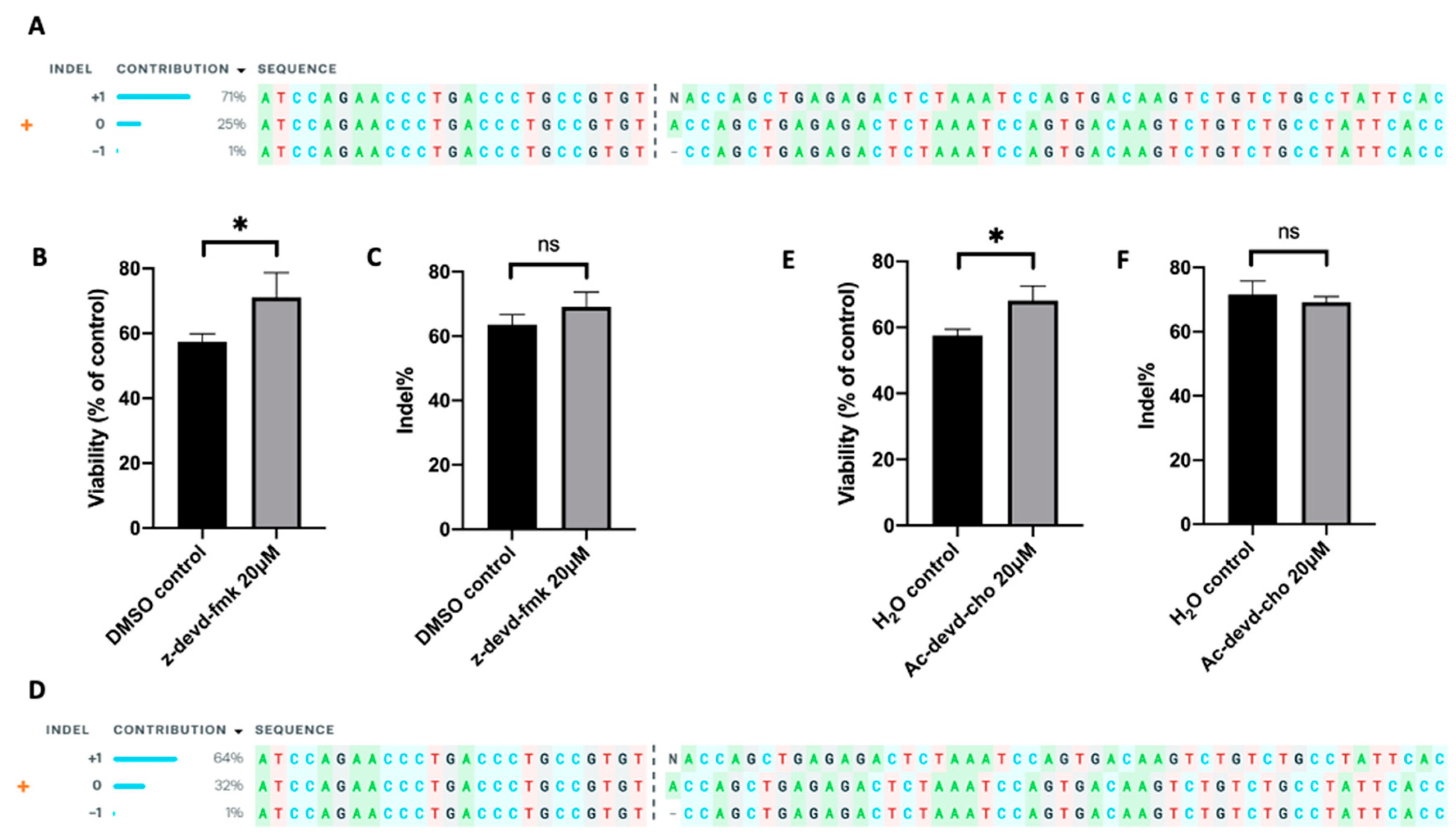 The auhtors' data show that specific inhibitors for caspase 3, such as z-devd-fmk and Ac-devd-cho, are non-toxic to human primary T cells even when combined with electrotransfer. Thus, they can be used to improve the efficiency of gene-editing in T cells. Results from the study suggest that inhibition of caspases is a promising strategy for improving CAR T cell production, and more generally, electrotransfer of molecular cargo in cell engineering applications.