Subjects: Others
View times: 138
Submitted by:

The selective catalytic reduction (SCR) has been widely used in industrial denitrification owing to its high denitrification efficiency, low operating costs, and simple operating procedures. However, coal containing a large amount of sulfur will produce SO2 during combustion, which makes the catalyst easy to be deactivated, thus limiting the application of this technology. This review summarizes the latest NH3-SCR reaction mechanisms and the deactivation mechanism of catalyst in SO2-containing flue gas. Some strategies are summarized for enhancing the poison-resistance through modification, improvement of support, the preparation of complex oxide catalyst, optimizing the preparation methods, and acidification. The mechanism of improving sulfur resistance of catalysts at low temperatures is summarized, and the further development of the catalyst is also prospected. This paper could provide a reference and guidance for the development of SO2 resistance of the catalyst at low temperatures.

Nitrogen oxide (NOx) is a general term composed of nitrogen, oxygen, and other compounds. It is one of the major pollutants from the exhaust gas of thermal power plants, industrial furnaces, motor vehicles, ship exhaust emissions, and includes N2O, NO, NO2, etc.—among which NO and NO2 account for the largest proportion[1]. A large amount of NOx emitted into the air will cause a series of environmental concerns. Therefore, exploring and developing efficient exhaust gas deNOx technology has been an area of intense investigation. Among all flue gas denitrification technologies, selective catalytic reduction (SCR) is an extensively applied technology due to its low reaction temperature and high denitrification efficiency[2][3]. Selective catalytic reduction (SCR) mainly refers to the reaction of NOx using NH3 as a reducing agent in the presence of O2 to produce pollution-free N2 and H2O, whose core is the catalyst.

2. SO2 Poisoning Mechanism of Low-Temperature Catalyst

At present, some power plants adopt wet desulfurization to remove SO2 with lower flue gas temperature, failing to meet the reaction requirements of V2O5/TiO2 catalyst. Therefore, there are many drawbacks such as low denitrification efficiency and catalyst waste. After desulfurization, tiny amounts of SO2 still exist in the exhaust gas, bringing about the deactivation of SCR catalyst. Therefore, developing a vanadium-free catalyst with great denitrification performance and sulfur and water resistance at low temperatures is extremely necessary[4]. To solve the sulfur poisoning of catalysts, many scholars have done a lot of research and elaborated on the poisoning mechanism in detail.

From the above studies, the SO2 deactivation mechanism on the catalyst at low temperatures can be observed mainly in the following three aspects. (1) The ammonium sulfate and ammonium bisulfate are formed by the reaction of SO2 and NH3 in the presence of O2 and attach to the catalyst surface, which can decrease the surface area, pore volume, and pore size of the catalyst, and then reduce the reaction rate. However, ammonium sulfate and ammonium bicarbonate will self-decompose when the NH3-SCR reaction is carried out above 280 °C and 350 °C, respectively, so the catalytic activity is able to be restored by the washing method at low temperatures[5]. (2) In the presence of O2, SO2 will react with the active component (mainly transition metal) on the catalyst surface to generate metal sulfate salt, which will cause irreversible deactivation of the catalyst. (3) SO2 will compete with NO at the adsorption sites on the catalyst surface when these acidic gases are present in the reaction system, which would reduce the formation of SCR intermediate products and the catalytic efficiency of catalyst. Figure 1-3 show the mechanism of catalyst sulfur poisoning.

Figure 3. Competitive adsorption of NO and SO2.

3. Research Progress of SO2 Resistance Catalyst at Low Temperatures

Catalyst is usually composed of active component and support, and there are other forms of catalysts such as composite oxide catalysts. To enhance the low-temperature sulfur resistance of catalysts, many scholars have focused their attention on the improvement of active components and supports. In addition, some scholars have found that the preparation method—the handling catalyst by acidification and reaction conditions—can make a difference in the SO2 resistance of catalyst.

The active component, which is composed of one or more substances, is the main unit of catalyst and affects the NH3-SCR reaction significantly. Using rare earth metals as well as transition metal oxides to improve active components is one of the most effective methods to improve sulfur resistance at low temperatures. We mainly summarized the SCR performance and/or SO2 resistance mechanism of catalysts modified with Ce, Fe, Cu, W and other metal elements, as shown in Figure 4-9. 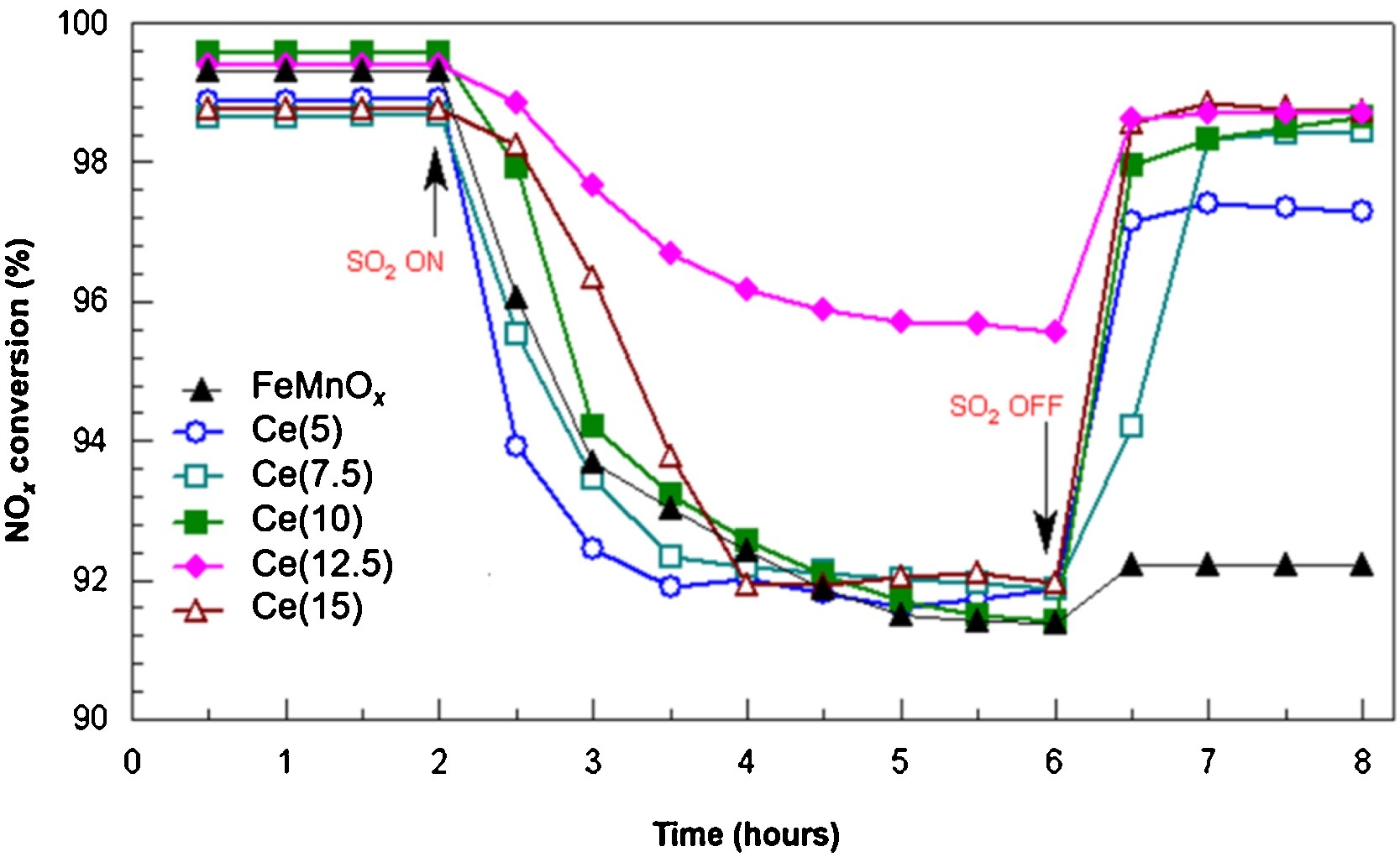 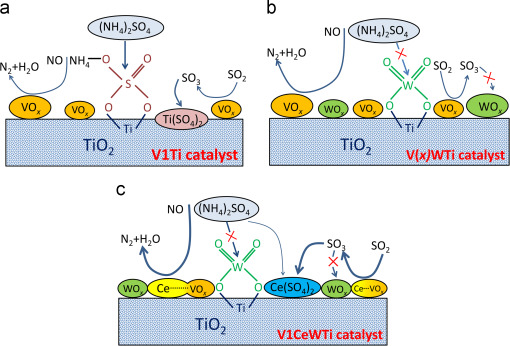 Above all, the content of oxygen adsorbed on the active material and catalyst surface—and even the number of acid sites—could be increased by adding Ce, Fe, Cu, W, and others to the active components, which would accelerate the rapid reaction of SCR and increase the catalytic performance of catalyst. Under the reaction conditions containing SO2, these additives can preferentially react with SO2 as the SO2 catchers to avoid the sulfation of active substances. Besides, the stability of NH4HSO4 and (NH4)2SO4 on the surface was reduced, and the low-temperature sulfur tolerance of catalyst was effectively improved. It is believed that transition metals and rare earth elements will have promising applications in improving sulfur resistance of catalyst at low temperatures. Figure 10 shows the typical SO2-tolerant modified catalyst at low temperatures for selective catalytic reduction (SCR) reaction. In recent years, extensive work has been done in the area of composite oxide catalyst. Compared with the supported catalysts, these catalysts all use metal oxides and have no clear support or active components. Many achievements have been made in the research of the catalytic performance and sulfur tolerance of catalyst.

3.4. Other Strategies to Improve the SO2 Resistance

Among all the measures to enhance the sulfur resistance of the catalyst, some researchers have tried to find the influence of preparation methods，acidification，preparation and reaction conditions, further promoting the acidity and catalytic efficiency of catalyst.

Facing progressively strict legislation and policies to control NO emission, the research and design of low-temperature catalysts for NH3-SCR have received a great deal of attention. Although the poisoning mechanism of catalyst at low temperatures has been studied thoroughly, how to maintain the high catalytic efficiency of catalyst at low temperatures and promote the SO2-resistance-poisoning ability of catalyst to achieve practical application is still an urgent problem.

In the presence of O2, SO3 is easily formed on the catalyst due to the oxidation reaction of SO2, and further combined with NH3 to produce NH4HSO4 and/or (NH4)2SO4, which can deposit on the surface of catalyst and inhibit the reaction gas to be adsorbed on the catalyst to participate in the SCR reaction. Besides, sulfate of active components can be formed and cause irreversible deactivation of catalyst. Therefore, it is effective to adopt several measurements to improve the SO2 tolerance. Firstly, it is to reduce the adsorption of SO2 on the catalyst. The highly acidic catalysts are effective to prevent the SO2 adsorbing. Secondly, preventing the oxidation of SO2 to SO3 plays a significant role in high SO2 tolerance by reducing the redox ability of catalyst, which can cut off the oxidation of SO2 to some extent. Furthermore, the synergistic effect between catalyst components can also improve the sulfur resistance of catalyst, such as the construction of sacrificial sites, which is responsible for the reduction of active components sulfation. Along with these existing excellent sulfur resistant catalysts, it is expected that future studies will focus on optimizing the supports and preparation methods and concentrating on the application of new structures and technology, which are effective strategies to improve the low-temperature SO2 tolerance of SCR catalysts.