More than 90% of all head and neck cancers (HNCs) are head and neck squamous cell carcinomas (HNSCCs) arising from the mucosal surfaces of the upper aerodigestive tract. HNSCCs are the the sixth most prevalent cancer worldwide, and are often associated with either carcinogens, such as alcohol and tobacco use, or oncogenic human papillomavirus (HPV) infection. HNSCCs have been found to be diverse with a high rate of genetic heterogeneity, resulting in hyper-activation of oncogenes (e.g., PIK3CA and HRAS) and loss-of-function mutations in tumor suppressor genes (e.g., TP53, CASP8, and NOTCH1). HNSCC cohorts from The Cancer Genome Atlas (TCGA) RNA-seq data and clinical data show patients with PIK3CA alterations, including amplification and gain, also have a higher chance of harboring TP53 mutations. In addition, these patients bearing both mutations have a significantly worse 10-year survival prognosis compared with their wildtype cohort counterparts.

Head and neck cancers (HNC) are a heterogeneous group of tumors arising from the mucosal surfaces of the upper aerodigestive tract [1]. Collectively, HNC is the sixth most prevalent cancer worldwide [1]. Some 90% of all HNCs are head and neck squamous cell carcinomas (HNSCCs) and HNSCCs are often associated with either carcinogens, such as alcohol and tobacco use, or oncogenic human papillomavirus (HPV) infection [2][3], thereby categorized as HPV(−) or HPV(+) HNSCCs. HNSCCs have been found to be diverse with a high rate of genetic heterogeneity, resulting in hyper-activation of oncogenes (e.g., PIK3CA and HRAS) and loss-of-function mutations in tumor suppressor genes (e.g., TP53, CASP8, and NOTCH1) [4][5]. Phosphoinositide 3-kinase (PI3K) is a frequently deregulated pathway in HNSCCs with a phosphatidylinositol-4,5-bisphosphate 3-kinase catalytic subunit alpha (PIK3CA) gene mutation rate of approximately 16% and gene amplification of more than 30% in tumors [6][7]. PI3Ks are activated by receptor tyrosine kinases (RTKs), such as epidermal growth factor receptor (EGFR), and consist of different classes of enzymes vital for differentiation, proliferation and cell survival [8]. Mammalian target of rapamycin (mTOR) complexes (mTORC1 and mTORC2) and protein kinase B (also known as AKT) are also involved in this pathway that can activate transcription and other signaling molecules of the PI3K pathway [9]. Monoclonal antibodies (mAbs) that inhibit EGFR have been used for both HPV(−) and HPV(+) subtypes of HNSCCs; however, they were found to have limited efficacy and elicited resistance [10].

Another highly mutated gene in HNSSCs is the tumor protein p53 (TP53) gene, with over 80% of HPV(−) HNSCCs harboring loss-of-function mutations in TP53; however, TP53 mutations occur much less frequently in HPV(+) HNSCCs (~3%) [4]. TP53 is a tumor-suppressor gene encoding a transcription factor that maintains DNA repair, cell cycle, senescence and apoptosis [11]. These attributes make p53 an important cell sensor for oncogene activation and DNA damage. It has been found that the degradation of p53 is associated with HPV E6 oncoproteins [3]. Although there have been several therapies that target p53 in hopes to restore p53 function, they have yet to be proven effective in clinical trials [12]. By and large, TP53 mutations are associated with poor HNSCC prognosis and overall survival with increased rate of recurrence and resistance to therapies. It remains poorly understood whether HNSCCs harboring different genetic alterations exhibit differential immune tumor microenvironment (TME). For instance, it is unknown whether HNSCCs with the double mutations in TP53 and PIK3CA have a more immunosuppressive TME.

Prior studies have generated murine models that mimicked the alterations of PIK3CA or p53 in HNSCCs. Transgenic mice that overexpressed wild-type PIK3CA in head and neck epithelium were generated; however, PIK3CA overexpression alone was not sufficient to initiate HNSCC formation [6]. Nevertheless, these PIK3CA Tg mice were much more susceptible to 4-nitroquinoline 1 oxide (4NQO)-induced HNSCC carcinogenesis [6]. Conditional deletion of p53 in mouse epithelial cells with K14.CrePR1 led to SCC development in about half of mice after 20 months [13]. To establish a mouse model that more closely resembles the genetic alterations in HNSCCs and allows us to better investigate immune evasion mechanisms of HNSCCs, we generated a novel genetic model by deleting p53 and constitutively activating PIK3CA in mouse keratin 15-expressing (K15+) stem cells, which leads to the development of multilineage tumors including SCCs, termed Keratin-15-p53-PIK3CA (KPPA) tumors.

The Cancer Genome Atlas (TCGA) RNA-seq data and clinical data of HNSCC cohorts were obtained from the cBioPortal (http://cbioportal.org). In analyzing the dataset of HNSCC patients (TCGA, PanCancer Atlas, n = 489 samples), we found that the patients with PIK3CA alterations, including amplification and gain, also have a higher chance of harboring TP53 mutations (Figure 1A). After merging two datasets (see details in Methods), we divided the patients into four different groups: PIK3CAAmp/TP53Mutated (n = 294), PIK3CAAmp/TP53WT (n = 85), PIK3CAWT/TP53Mutated (n = 56), and PIK3CAWT/TP53WT (n = 54). Kaplan Meier curves of five-year survival were shown for four different groups, and PIK3CAAmp/TP53Mutated group exhibited a hazard ratio of 1.61 (95% CI, 0.94–2.75) compared to PIK3CAWT/TP53WT group (Figure 1B). PIK3CAAmp/TP53Mutated group’s 10-year survival hazard ratio was 1.8 (95% CI, 1.06–3.07), and showed a significantly worse prognosis than PIK3CAWT/TP53WT group. 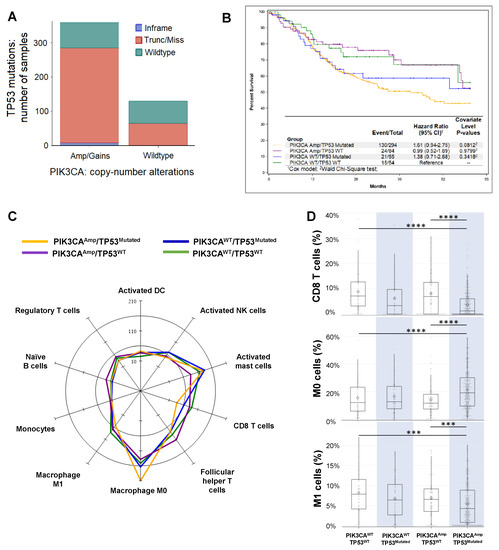