Streamflow Duration: The length of time a stream has surface flow or conversely, has no surface flow. It is one of several dimensions that characterize flow regimes of streams[1]. Streamflow duration is used to differentiate reaches into discrete classes (e.g., perennial, intermittent, and ephemeral) for water resource management.

Because streamflow influences patterns and processes in streams and adjacent riparian areas, streamflow classification is often used to support environmental management and restoration decisions. While gauging stations provide direct hydrological data for streamflow classification, the cost of maintaining gauging networks limits their lifespan and geographical extent[2]. For instance, gauges tend to be located on large, generally perennially flowing streams and rivers, so most of the stream miles in the United States (U.S.) are underrepresented by the gauge network[3]. Being less expensive, the deployment of data loggers[4][5] can fill gaps missed by gauge networks, but these approaches still require substantial effort and have a time lag in supplying data for classification. The National Hydrographic Dataset (NHD) is the most comprehensive source on stream extent and streamflow classification in the U.S.; however, the NHD is a static characterization that also tends to more accurately characterize larger streams and rivers than the more abundant headwater streams[6][7]. Unlike gauges, remote sensing approaches have the potential to characterize hydrology across landscapes[8][9]. Nonetheless, the coarse temporal resolution and constrained ability to differentiate water surface from the bed surface in shallow flowing water in networks through dense tree canopies are limitations of current remote sensing technology to inform comprehensive streamflow classification. Consequently, reliable hydrography information (i.e., channel extent, flow duration class) is not always available where needed to support management decisions.

The presence of surface flow is a fundamental basis for stream classification. The presence and absence of surface flow represents a break along a gradient of hydrologic conditions (Figure 1). Surface flow can range from interstitial flow, where surface flow is visibly limited to flow between stones or organic material in shallow habitats or visible only at the tails and heads of pools; to overbank flooding, where the entire channel and adjacent floodplain may be submerged under flowing water[10][11]. The lack of surface flow can be reflected in one or more of the following conditions: pools of standing water; moist streambed sediment; completely dry sediment[12]. 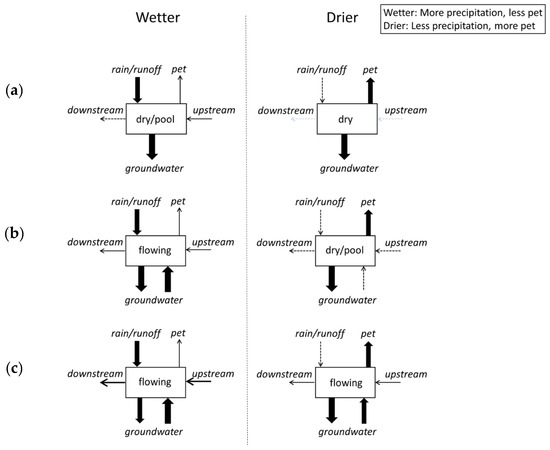 Classification of flow presence has historically focused on the temporal dimension, specifically on streamflow duration or continuity of flow through time. Perennial describes channel lengths having continuous surface flow that do not experience drying outside of extreme drought[10][13]. In contrast, channels that experience recurrent loss of surface flow are called nonperennial[14]. These can be further subdivided into intermittent and ephemeral. Intermittent channels are typically defined as having continuous surface flow for part of the year that is sustained by snowmelt and/or groundwater. In contrast, ephemeral channels are typically defined as flowing only during and immediately following precipitation or snowmelt[10][13]. Although there is not a universally accepted duration that separates intermittent and ephemeral flow, the timing of streamflow becomes more predictable going from ephemeral to intermittent to perennial within a given geographic area. Similarly, while there is not a universally accepted length of record needed to classify streamflow duration, it is generally accepted that streamflow duration classes represent the typical regime at a reach over many years. While a reach may change streamflow duration classes in the long term due to any number of factors (e.g., long-term water withdrawal or augmentation, channel headcutting, changing climatic conditions), the streamflow duration classification of a reach represents the typical regime and, therefore, does not change year to year.

To appropriately apply such a classification scheme based on gauge, survey, or indicator data, it is important to understand what streamflow duration classifications do not represent. For example, these flow classes do not describe the magnitude of streamflow, either in terms of individual events or cumulatively over longer periods. Although groundwater commonly supplies more consistent base flow to perennial and intermittent reaches[15], streamflow duration classes are not exclusively defined by the sources of streamflow. Previous studies have used the classification terminology to describe the spatial dimension of surface flow or connectivity through space. For instance, intermittent has been used to describe channels with pools interspersed along an otherwise dry channel[16][17]. A mosaic of such conditions can occur across a stream network at a given point in time, and these patterns are spatially controlled by natural and anthropogenic factors[18][19]. Because of recurrent drying of varying frequency, duration, and predictability, nonperennial streams can be considered transitional, representing a continuum between strictly aquatic and strictly terrestrial habitats.

Environmental indicators are measurable properties that provide inference regarding a more complex phenomenon of interest[20]. Streamflow Duration Assessment Methods (SDAMs) are rapid, reach-scale indices or models that use physical and biological indicators to predict flow duration class. Such surrogate measures are used because direct measurement of flow over time is either too difficult or resource intensive. These indicators may be environmental characteristics that control or govern streamflow duration (e.g., catchment features or climate), as well as those that respond (e.g., presence of long-lived taxa that depend on year-round flow). Control and response indicators are not necessarily mutually exclusive.

The relationship among indicators, study reaches, and hydrologic data represents the conceptual framework upon which SDAMs are built (Figure 2). The relationship between direct hydrologic data and indicators reflects the cause and effect relationships between stream drying and physical and biological environmental variables. Study reaches need to reflect the range of streamflow duration and hydrologic conditions as quantified by hydrologic data observed at the reach-to catchment-scale. Regionalization and stratification of SDAM study reaches through site selection may account for the natural and anthropogenic spatial variability (e.g., climate, biogeography, land use) to ensure environmental indicators can consistently and accurately distinguish flow duration classes throughout space and time within a targeted geographic area.

Indicators can be physical or biological and either responses to or controls of flow duration. Although SDAMs may include control variables, the purpose of SDAMs is to predict flow duration not to provide causal insight for why flow at some reaches has longer or shorter duration than at other reaches. The discriminatory ability of indicators will vary spatially and temporally as their relationships to flow duration are linked to other environmental gradients; therefore, indicators reflecting flow duration over longer periods of time (e.g., years) are favored over those that reflect more transient flow conditions.

Study reaches for SDAM development are selected to capture variability of the primary spatial and temporal controls on, and responses to, streamflow duration. Assessing indicators at a sufficient number of reaches to adequately represent key gradients will help produce a robust method for the target region. At a minimum, the study design should consider stratifying reaches of varying flow duration across the three dominant controls of intermittency: meteorology, geology, and land cover[18].

An operational framework for the development of rapid, accurate, robust, and consistent regional SDAMs (Figure 3) outlines the process steps needed to successfully integrate the data-driven components of SDAMs into usable methods: preparation, data collection, data analysis, evaluation, and implementation. These process steps outline how to include stakeholders and end-users throughout method development to ensure users have trust in the SDAM development process and that SDAMs are used consistently and appropriately within a region.

6. Need to Improve SDAMs and Their Application

There remains a need for increased hydrologic data collection in intermittent and ephemeral streams, because most stream gauges are stationed in perennial streams. Collecting additional continuous data through gauges, loggers, and time-lapse photography should be prioritized for high-confidence streamflow duration classifications that can be used in developing SDAMs. Discrete sources of direct hydrologic data also present a strong opportunity for data collection expansion, including data that are obtained through local expertise, indigenous ecological knowledge, or citizen science efforts. In addition to expanding the spatial coverage of direct hydrologic data, future efforts should also focus on the development of long-term flow records from intermittent and ephemeral streams. Future work should also focus on SDAM indicator development, including identifying the appropriate scope of inference for such indicators across different geographic areas and other natural or human-driven gradients. Importantly, continued work in pursuit of developing functional assessment methods and biomonitoring programs that explicitly consider streamflow duration class will continue to inform our ecological understanding of nonperennial streams, and thus, the development of SDAMs[21][22][23].