Xanthine oxidoreductase (XOR) is the enzyme that catalyzes the oxidation of hypoxanthine to xanthine and xanthine to uric acid. XOR is widely distributed throughout living organisms and is highly conserved in prokaryotic, plant, and animal species. XOR activity is very versatile, generating both pro-oxidant (primarily within the cell) and anti-oxidant (primarily in plasma) products.

XOR belongs to a family of molybdenum-flavin iron-sulfur hydroxylases, with a wide phylogenetic distribution in living organisms from prokaryotic to eukaryotic species and a possible common derivation from an ancestral XOR-coding gene system. In vertebrates, XOR has a homodimeric structure of about 290 kDa and each subunit is composed of three domains: a 20-kDa N-terminal domain with two non-identical iron-sulfur redox centers, a 40-kDa intermediate domain with a flavin adenine dinucleotide (FAD) cofactor and an 85-kDa C-terminal domain with a cofactor consisting of a molybdenum atom bound to a molybdopterin molecule (Moco). The domains are connected by means of unstructured hinge regions. The Moco-containing domain holds the substrate pocket, where oxidation occurs and from which the electron flux moves through the two iron-sulfur clusters towards the FAD-containing domain, where the electrons acceptor is reduced [1] (Figure 1).

In lower organisms, XOR has only a dehydrogenase activity, while in mammals the constitutive NAD+-dependent xanthine dehydrogenase (XDH, EC 1.17.1.4) can be converted to xanthine oxidase (XO, EC 1.17.3.2) by limited proteolysis or oxidation of sulfhydryl groups [2]. The transition of XDH to XO includes an intermediate XOR form that has both dehydrogenase and oxidase activity [3]. In highest primates, XOR catalyzes the last two steps of purine catabolism, i.e. the oxidation of hypoxanthine and xanthine to uric acid. Since uric acid is an irreversible product, XOR activity precludes the salvage pathway of purine nucleotides. In addition to catabolizing the purines, XOR metabolizes various endogenous and exogenous substrates, including some drugs [4]. Evolution conferred on XOR the role of producing various secondary messengers in inflammatory signaling [5][6].

In human tissues, XOR is expressed at high level only by epithelial cells of lactating mammary gland, liver, intestine and kidney, and the dehydrogenase activity is prevalent within these cells. Instead, the oxidase form is associated to endothelial cells and XO activity is mainly present in biological fluids such as plasma and milk [7][8].

Uric acid produced by XOR activity, at physiological level, helps to support a normal blood pressure and has an extracellular antioxidant action, which is protective against neoplastic transformation [9]. On the other hand, uric acid and the free radicals derived from its reaction with reactive oxygen species (ROS), nitric oxide (NO) and reactive nitrogen species (RNS) may exert a pro-oxidant action, mostly inside the cell. When released from dead cells, uric acid behaves as a danger-associated molecular pattern and has a proinflammatory activity. Hyperuricemia contributes to endothelial dysfunction, hypertension, renal and cardiovascular diseases, as well as fatty liver, obesity, insulin resistance, diabetes and metabolic syndrome [6][10].

By delivering electrons directly to molecular oxygen, XO generates superoxide anion (O2•-) via a one-electron reduction and hydrogen peroxide (H2O2) via a two-electron reduction. These ROS, in turn, can produce hydroxyl radicals in the presence of iron or other transition metals through the Haber-Weiss and Fenton reactions. XDH may produce O2•- and H2O2 at FAD site by oxidizing NADH, especially under hypoxic conditions. In addition, XOR can reduce nitrates to nitrites and to NO, which generates peroxynitrite (ONOO-) and other RNS by reacting with ROS, thereby concurring to oxidative stress. The nitrate reductase activity of XOR occurs at the Moco site, as the purine oxidative hydroxylation. Allopurinol and febuxostat inhibit both activities in a competitive or non-competitive way, respectively, but are ineffective toward the NADH oxidizing activity of XOR [11].

XOR-generated ROS contribute to innate immunity and are upstream to the signaling pathway leading to mitochondrial ROS production that is indispensable for the activation of macrophagic NLRP3 inflammasome by pathogen associated molecular patterns (PAMPs), damage associated molecular patterns (DAMPs) or environmental irritants and consequent IL-1β secretion [12]. In addition, the reactive species produced by XOR exert a physiological role by activating the endothelial response in inflammation and they also have a redox signaling function resulting essential in the regulation of arteriolar tone [5][13]. Reactive oxygen and nitrogen species also have an indispensable physiological role as a second messenger to modulate different cellular outcomes and vascular responses [14].

A considerable amount of evidence highlights the crucial role of oxidative stress in the aging process following both the progressive increase of ROS and RNS production and the reduction of the efficiency of antioxidant scavenger systems. If the resulting balance between these metabolic processes leads to an excessive formation of free radicals, the consequence is the pathological modification of glucides, lipids, proteins and DNA. The accumulation of these altered molecules strongly contributes to the progressive loss of physiological functions and to the increase in chronic inflammatory diseases, which both characterize senescence. This justifies the oxi-inflamm-aging name given to the prevailing transformation modality that occurs in the body of the elderly in contrast to the centenarians, who show an antioxidant profile and represent a group of successfully aged people. In addition, the oxidative stress contributes to the senescence of multipotent stem cells, thus impairing their ability to repair injured tissues [6][15].

Under hypoxic and low pH conditions, XOR can produce NO from which highly cytotoxic ONOO- can be derived. Furthermore, the uric acid produced by the activity of XOR can give rise to dangerous free radicals. These observations, together with the increase in both XOR activity and oxidative stress associated with aging suggest that XOR products contribute to the senescence process. For these reasons, XOR inhibition through specific drugs is recommended by many authors, for example in cardiovascular pathology [16].

XOR is one of the major causes of oxidative stress after hypoxia/reoxygenation and ischemia/reperfusion. Tissue damage due to ROS generated during reperfusion after ischemia is considered a key problem in organ preservation for transplantation, particularly for XOR-rich organs, such as intestine and liver [7].

XOR-induced oxidative stress is implicated in the pathogenesis of endothelial dysfunction, which is associated with smoking, hypercholesterolemia, hypertension, and diabetes, i.e., the main risk factors for atherosclerosis, in turn leading to cardiovascular and renal diseases [13]. Furthermore, XOR can contribute to the pathogenesis of metabolic syndrome through the oxidative stress and the inflammatory response induced by XOR-derived reactive oxygen species and uric acid [10]. Chronic inflammation and oxidative stress induced by XOR activities are correlated to neurodegenerative disorders and cancer. In cancer pathogenesis, XOR has an ambiguous role: XOR-derived ROS may activate genes responsible for each phase of cancer development (e.g. transformation, promotion, angiogenesis, progression, metastasization) as well as genes that promote antioncogenic activities (e.g. apoptosis, differentiation) [8][11].

The ambivalent behavior of some ROS and RNS, as well as uric acid, depends mainly on the concentration they reach, leading to oxidative stress only if their level is much higher than normal. All together, these motivations justify the inconsistency of the results obtained with XOR inhibitors and the caution in assessing the appropriateness of their clinical use in asymptomatic hyperuricemia.

The main pros and cons effects of XOR activities are reported in Figure 2. 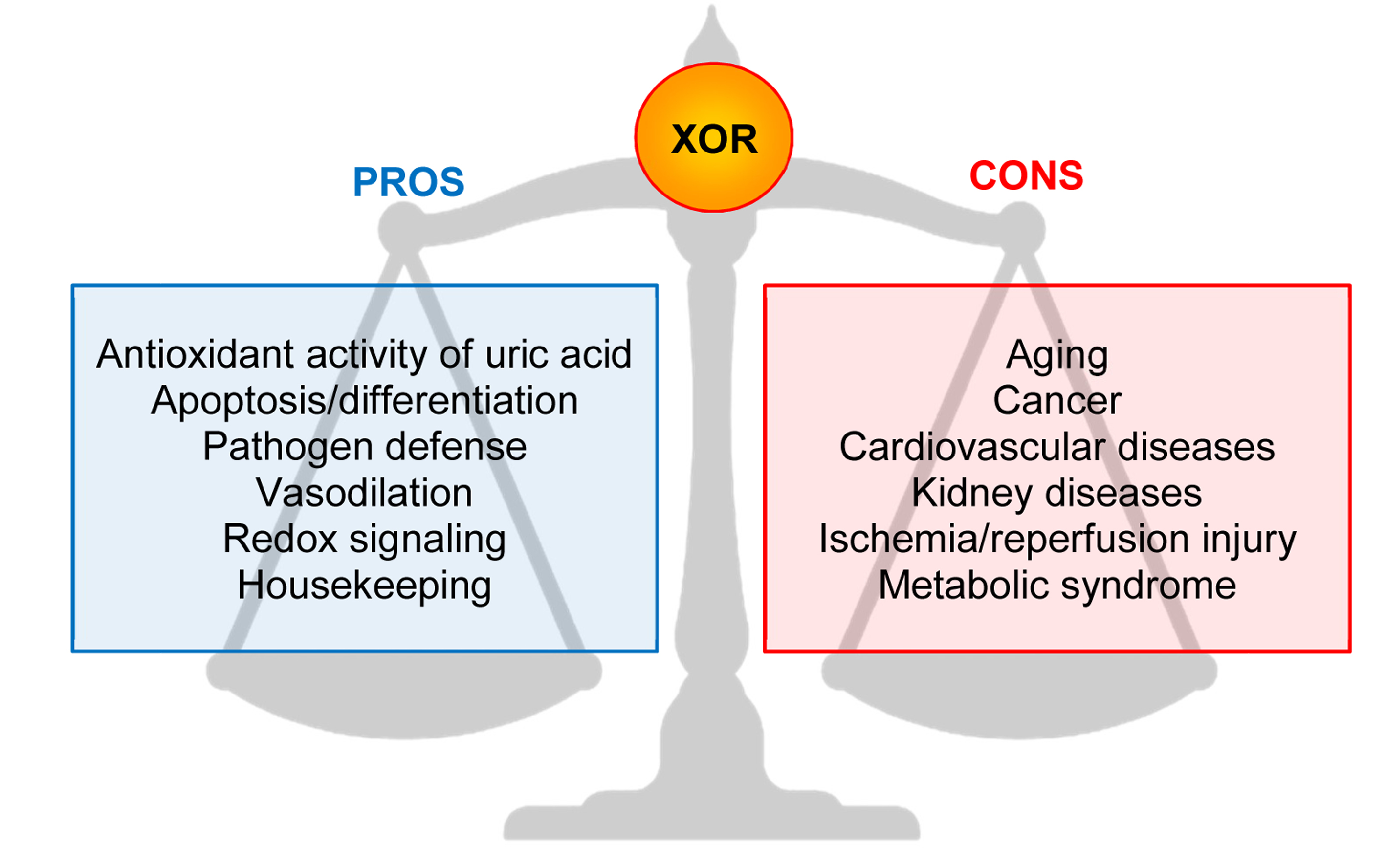