Bioenergy represents energy from biomass and plays an important role in promoting renewable alternatives. LC biomass is one of the most generous renewable bioresources in nature containing lignin, cellulose, and hemicelluloses. Lignocellulosic materials are the best sources used for biofuel production, such as biogas, and include residues from agriculture and forests, energy crops, and municipal and food waste. According to the latest statistical report for biogas, in Europe, almost 72% of the feedstocks used in the anaerobic digestion (AD) process for biogas production come from the agricultural sector, such as energy crops, manure, and other agricultural residues. The main issue of using lignocellulosic (LC) biomass for the biogas production is biomass recalcitrance, which represents biomass resistance to chemical and biological breakdown.

In order to produce biogas, we need substrate, the most important material used as food for methanogen microorganisms. Substrates are the organic feeding material for all AD applications [1]. The substrate used for biogas production can be of various types like crop residues, animal manure and slurries, organic waste from households, organic fraction of municipal solid waste, and organic waste from dairy production, food industries, and agro-industries. Furthermore, algal biomass, and micro and macroalgae, are being used for studies given their biogas yielding potential [1]. A substrate type that has not been mentioned until recently is represented by energy crops that in recent years have become more and more used for obtaining an alternative source of energy.

Co-digestion is another popular method, where two or more substrates are used in the AD process, with the purpose to balance the C/N ratio of the feedstock. An example for this process can be given by giant cane in combination with pig slurry, co-digested in a continuously stirred tank lab scale reactor [2]. Substrate properties influence the efficiency and stability of the anaerobic process used for obtaining biogas. Moreover, its composition affects the quality and the quantity of the gas obtained.

Since the desire and the necessity to reduce global warming, scientists have studied different types of alternative sources of energies than can be applied, thus mentioning that LC biomass can be of great interest due to the fact that it is the most abundant organic source (forest residues, industrial activities, agricultural activities, or energy crops) [3].

The LC biomass is composed from three major fractions—cellulose, hemicellulose, and lignin. The structure formed by these three major components is resistant to lignocellulosic material bioconversion and that is why a pretreatment process is used to disintegrate the composition in order to obtain a higher biogas production rate.

There are also studies that give different percentage intervals for lignocellulose biomass composition, such as hemicellulose 10–40%, lignin 5–25%, and cellulose 40–80% [5].

As part of the lignocellulosic material, cellulose is a polymer, type polysaccharide of glucose disaccharide units, with cellobiose tightly connected by b-1, 4-glycoside bonds [6]. Cellulose is also the principal compound of plant cell walls, making it an abundant source of organic compound on earth [7]. Hydrogen bons link the molecules of cellulose with different orientations, leading to diverse levels of crystallinity, which has an important part in the biodegradation of cellulose, with a higher crystallinity leading to problems in the process [8].

Hemicellulose is branched heterogeneous polymer of diverse polysaccharides like pentoses, hexoses, and sugar acids [6]. Given its branched nature, it allows the formation of almost indestructible bonds with cellulose and lignin, increasing lignocellulosic material rigidity [9].

The second abundant compound of LC biomass on earth is lignin. Lignin is made out of phenylpropane units. Lignin links cellulose and hemicellulose in order to form a solid three-dimensional structure of the plant cell wall [8].

Looking at the structure of lignocellulosic matter, we can see that a skeleton is formed out of cellulose and by hemicellulose and lignin, similar to a matrix, and binding materials [10]. The high resistance of lignocellulose to biological degradation is linked to a high degree of refractory lignin presence [11]. An amorphous matrix material is formed by hemicellulose since it is non-covalently bonded to the external area of the surface of cellulose fibrils [12]. Even though it is the compound that has the weakest bond compound and it has a high chemical sensitivity, it plays a crucial role in strengthening the structure of lignocellulose. Lignin is a macromolecule that is crosslinked and relatively hydrophobic and aromatic, but it has a high resistance to biological degradation [13]. Cellulose is hydrophilic, because of the existence of groups R-OH, and internal hydrogen bonds, but not highly soluble in water because its large size [14]. To express better the composition of the lignocellulosic matter by high lightening the structure we added data that it is presented in Table 1. The chemical composition is mentioned for each structure cellulose, hemicellulose and lignin. Thus, the table below presents the composition of different lignocellulosic substrates.

AD is a well known method for converting organic materials into bioenergy, and its effectiveness and sustainability have been demonstrated by different research papers and industrial investigations [34]. The AD process uses microorganisms to degrade organic material and convert it to biogas. Degradation of lignocellulosic matter is dependent on enzymes produced by microorganisms. AD is separated in four main sequential steps: hydrolysis, acidogenesis, acetogenesis, and methanogenesis [35].

Even though AD is a proven method of converting organic matter into biomethane, the result was not the same in the case of LC biomass rigidity [9], due to the fact that LC biomass properties and composition inhibits the property of microorganisms and enzymes involved in AD to decompose the organicmaterial. This is because of lignin, which is like a rigid cover for cellulose and hemicellulose [36]. Multiple research papers have outlined the fact that greater lignin content in the organic fraction results in reduced biogas and methane yield [37]. Therefore, in order to have a productive AD process on lignocellulosic material, high in lignin content, different pretreatment steps are needed to expedite the hydrolysis of LC biomass, enhancing the biogas production.

To better illustrate the way LC biomass is structured, we can observe Figure 1. The molecules for lignin, cellulose, and hemicellulose are presented, as well as the three lignin monomers, coniferyl (G) alcohols, coumaryl (H) and sinapyl (S), and, with a detailed image of the crystalline cellulose. 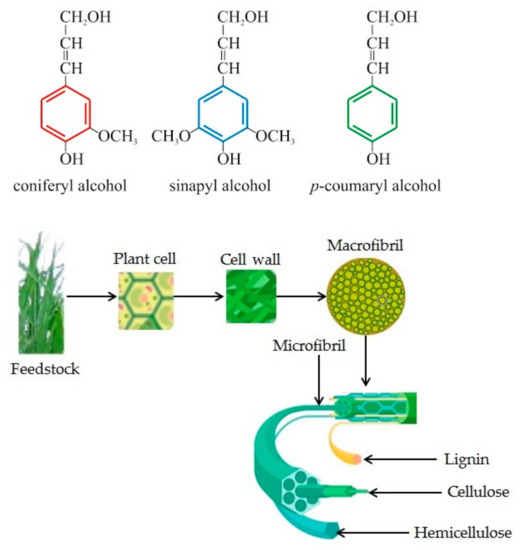 Using enzymes in the LC biomass pretreatment is a common way to increase biogas yield, but its effect depends on the enzymes being used, and also the structure of the treated biomass, given enzyme specificity [40]. As an example, there is an enzyme called laccase, derived from phenoloxidase, which works by catalyzing phenol, anilines, and aromatic thiols oxidation in the feedstock, leading to microbial growth and fermentation ability being enhanced in the AD [41].

Efficiency of different enzymes for the AD process depend on several factors, including substrate composition, incubationperiod, temperature, pH levels, and reactor design [42].

Barley shell, pearl millet husk, rice straw, wheat bran, and wheat straw where subjected to a xylanases enzyme that was synthesized from Aspergillus niger. The results reported a saccharification of approximately 34.5% for rice straw after 8 h of incubation [43].

BP uses a variety of microorganisms and enzymes to selectively degrade lignin and hemicelluloses, resulting in enhanced biomass saccharification and biomass yield [44]. The best microorganisms for BP are the species of white-rot fungi from the Basidiomycetes class. Phanerochaete chrysosporium gives maximum efficiency due to its high growth rate and lignin degradation capabilities [45]. Microorganisms from the natural environment (Mcons), like soil, cow dung, goat dung, etc., are used for pretreating lignocellulosic material, having the ability to degrade both cellulose and hemicellulose.

Zhang et al. [46] created thermophilic Mcons from different sources, such as thermophilic landfill and decaying straw. This mixture was mixed with distillery wastewater in order to pretreat cassava waste at 55 °C for 12 h, resulting in a 96% higher methane yield.

Most pretreatment methods for lignocellulosic AD processes require high amounts of energy and chemical input in order to properly work, but they also create detrimental impacts [47]. Compared to these methods, BP is highly economical regarding energy and chemical requirements, and also does not produce inhibitory byproducts. BP is realized by the external addition of microorganisms and/or industrial and lignolytic enzymes and cellulase, to break down the lignocellulosic components [48]. Due to the fact that microbial enzymes are efficient in degrading lignocellulosic compounds, BP is known as one of the best ways of degrading this type of biomass, even though the enzymatic reaction rate is very slow [49].