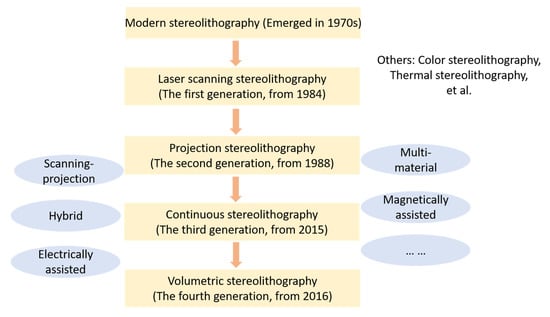 Figure 2. The overview of stereolithography[4][5][8][9][10][11][12][13][14][15]. As supplements, other kinds of processes and systems have also been provided, such as the scanning–projection process, hybrid stereolithography process, and multi-material process.

The process of stereolithography (Figure 3a) starts with a standard tessellation language (STL) file, which now is the standard for every AM process[16]. By slicing the STL file, the 3D model is translated to 2D slices that contain the information of cross-sections[17][18]. According to these 2D slices, the physical model can be produced layer by layer. Figure 3b illustrates the structure of the STL file format. The 3D model of the STL format is represented with many small triangular facets. Each triangular facet is described by the coordinates of three vertices and a unit vector pointing outside of the facet to indicate the normal direction[19][20].

The fundament of stereolithography is the curing reaction of resins, which is an exothermic polymerization process characterized by chemical cross-linking reactions[21][22]. The reaction is initiated by supplying the energy of UV light and there are two transitions during the curing reaction process: gelation and vitrification[21][23][24][25][26][27][28]. Gelation is a liquid-to-rubber transition that realizes a dramatic increase in viscosity. During this transition, both gel phase and sol phase coexist in the system. Vitrification is a gradual, thermo-reversible process that leads to the transition from liquid or rubber resin to glassy solid resin[22][26][29][30][31].

Figure 3. (a) The fabrication process of stereolithography. (b) The structure of the standard tessellation language (STL) file format.

Since modern stereolithography was proposed by Hull, it experienced four generations of technological innovation (Figure 2). Using different technologies, researchers have developed various kinds of physical systems for improving the performance of stereolithography. Benefiting from these systems, we are able to print sophisticated objects with several orders of magnitude in scale by using a variety of materials[32][33][34]. In this section, we will review the typical systems in each generation.

As the first generation, laser scanning stereolithography prints a 3D object by scanning a focused laser beam over the resin surface to cure the irradiated resin. To realize the scanning, some researchers used galvanometric mirrors to control the laser beam moving along the X–Y direction (Figure 4a)[35][36][37], while a motorized stage is adopted to switch the position for each layer. However, scanning with galvanometric mirrors results in defocusing of the light beam as well as optical errors[38][39][40]. Instead of galvanometric mirrors, using the X–Y translation stage with a fixed focused light beam can avoid these problems. During the printing, the focused laser point remains fixed on the resin and the X–Y translation stage is designed to move either all the optical system or the printing platform on which the object is printed. Figure 4b shows one such system, which is also known as constrained surface technique[41][42][43][44][45]. For this system, objects are produced below a transparent glass window since the fixed light beam focuses on resin through the window and the vector tracing of each layer is executed by motorized stages. The function of a transparent glass window is to push the liquid resin to avoid the fresh resin spreading on the already polymerized part of the object, which allows the layer thickness to be well controlled. However, polymerizing through a glass window causes a major drawback of the constrain-surface system, which is the adhesion of resin to the glass widow. To overcome this problem, Zissi et al.[46] firstly described a scanning stereolithography system with a free surface technique in 1994 and Zhang et al.[47] also introduced their free-surface system with high resolution in 1998. The typical free-surface scanning stereolithography system is illustrated in Figure 4c. Like the constrain-surface system, motorized stages are also employed in the free-surface system to trace the contour profile of each layer of objects. The fixed UV light beam focuses on the resin surface and solidifies the curable resin to produce objects above the printing platform. Without adhesion issues, the free-surface stereolithography system shows excellent capability in fabricating microstructures[48][49][50][51][52]. In addition, another important laser scanning process, two-photon polymerization (2PP), is considered as a unique photopolymerization process[14][15][53][54][55][56][57]. It differs from conventional (single-photon) stereolithography by focusing femtosecond laser pulses to a very narrow spot in which the resin is polymerized via absorbing two photons simultaneously. Therefore, two photon polymerization has advantages in fabricating micro/nano-scale structures[58] with sub-100-nm resolution[59]. Figure 4d shows a typical setup of a 2PP system[60]. The most interesting part of 2PP is that it offers sub diffraction limit resolution for manufacturing fully 3D structures. Lithographic techniques with superior resolution, namely e-beam lithography, are limited to fabricate high aspect-ratio 2D structures. However, 2PP still shares the same common time-consuming issue as other scanning stereolithography methods since the fabrication of 3D structures is realized through the point-by-point addition of voxels.

In contrast to the scanning process, the second generation stereolithography can print each layer of objects simultaneously with a single exposure by projecting mask patterns onto the resin surface. The original ideal of photomask was proposed by Fudim in 1980s[12][13]. Fudim developed a system that illuminates a curable resin with UV radiation through masks and a piece of flat material transparent to the radiation. Then, in the early 1990s, Pomerantz[62] introduced his photomask system to produce 3D models. The working process of his system can be concluded as: deposit a thin layer resin; illuminate the resin through a xerographically created mask that has a single cross section; remove the uncured resin; fill the regions vacated by the uncured resin; cure the rest of the layer; grind the surface to build a uniform layer; repeat these steps until the object is completed. However, this kind of photomask system requires a great number of masks and precise mask alignment, which consume a lot of cost and time.

The digital micromirror device (DMD) developed by Texas Instruments[72], which is widely used in video projection applications[73][74], has been adopted as a dynamic mask for projection stereolithography. The DMD is in fact an array of up to several millions of mirrors that can be controlled independently to generate mask patterns. Table 1 provides the comparison between LCD and DMD[75]. The first stereolithography system using DMD was reported by Bertsch et al.[76][77][78] while a light source with visible wavelengths was used in their system. C. Sun et al.[75] introduced their DMD-based stereolithography system in 2005. In their system, a UV light source and a UV curable resin of 1,6-hexanedioldiacrylate (HDDA) were used for the fabrication of complex 3D microstructures with the smallest feature of 0.6 µm. Figure 5 shows a typical top-down projection stereolithography system. Due to the high efficiency, which only depends on the layer thickness and the required exposure time, and the excellent property of DMD, projection stereolithography using DMD as a dynamic mask has been widely used for micro manufacturing applications.

Although projection stereolithography of the second generation makes it possible to cure each layer simultaneously with a single exposure, it is not a continuous manufacturing process from layer to layer. For the formation of each printed layer, three steps must be conducted sequentially: the first step is to expose resin to UV light, secondly the cured part needs to be mechanically moved either to separate from the surface of resin vat (for bottom-up systems) or to lower into the resin (for top-down systems) for resin renewal, and the third part is re-positioning[79][80][81]. Since each step takes several seconds, the printing speed is restricted to a few millimeters per hour. CLIP (Figure 6a)[5][82], achieved by creating a persistent liquid interface (dead zone) with an oxygen-permeable window below the UV image projection plane, is devised to print objects without stops from layer to layer. The oxygen-containing dead zone is able to inhibit the photopolymerization between the window and the polymerizing part, which allows the part to be continuously exposed while elevating. Thus, the latter two steps that existed in traditional stereolithography can be eliminated. By using the CLIP technique, the parts can be drawn out of the resin continuously at rates of hundreds of millimeters per hour. By integrating a side motion along the X axis between the resin tank and the Z platform to actively feed resin to the light exposure area, Y. Chen et al.[83][84] also presented their continuous stereolithography system. Differing from the passive resin feeding used in the CLIP technique, the resin recoating in Y Chen’s system can be significantly accelerated by the side motion. Thus, the printing speed of continuous stereolithography is expected to be further improved. Due to strong competitive advantages, the CLIP technique has rapidly attracted a lot of attention, although it has only been a few years since it was first proposed[85][86].

In addition to CLIP, some researchers have reported their different continuous stereolithographic approaches. Chad A. Mirkin (Figure 6b)[87] reported a thermal controlled continuous stereolithographic approach that uses a mobile liquid interface to reduce the adhesive forces between the window and the curing objects. Since the mobile liquid interface (flowing immiscible fluorinated oil) can minimize interfacial adhesion at the build region and dissipate heat, the high-area rapid printing (HARP) can be realized by rapid print rates without thermal limitations. Timothy F. Scott et al. (Figure 6c)[88] demonstrated a dual-wavelength continuous stereolithography system, where one wavelength of light is used to inhibit the polymerization while a second wavelength of light initiates polymerization of the resin. By varying the intensity of two light sources, an inhibition region can be created between the widow and the curing parts, eliminating adhesion and enabling continuous printing.

Distinguishing from previous stereolithography processes that fabricate structures layer by layer, volumetric stereolithography produces 3D objects with the formation of 3D volumes as a unit operation. Inspired by the holographic lithography, Maxim Shusteff et al.[6][8] first introduced volumetric 3D structures patterned as a single operation into 3D printing. They designed a volumetric stereolithography system (Figure 7a) in which the superposition of patterned optical fields from three orthogonal beams were projected into a photosensitive resin. By the compensation between each beam, volumetric 3D geometries can be formed in a single exposure from the superimposed profile. Timothy F. Scott’s team further explored their dual-wavelength process to realize volumetric 3D printing (Figure 7b)[89]. By employing two perpendicular irradiation patterns at blue and near-UV wavelengths to independently effect either polymerization initiation or inhibition, the system allows the fabrication of objects by volumetric photopolymerization patterning in bulk resin. A promising volumetric additive manufacturing technique realized by tomographic reconstruction was separately proposed by Hayden K. Taylor et al. in 2019[7] and Paul Delrot et al. in 2020[90]. The tomographic volumetric stereolithography is based on the simultaneous irradiation of an entire volume of photosensitive resin. As shown in Figure 7c,d, a cylindrical container of resin is set into rotation while it is being irradiated from the side with computed patterns of light. The light patterns computed by a Radon transform, similarly to tomography[91][92], are displayed in synchronization with the rotational movement of the resin container. After the resin has been illuminated from all angles by patterns, a three-dimensional distribution of accumulated light dose is created, causing the resin to locally reach its gelation threshold, thus the desired objects can be fabricated as a whole of volume (Figure 7e,f). Currently, the volumetric additive manufacturing has shown the potential to produce complex parts with a high throughout (>105 mm3 per hour) and a wide range of materials. In the foreseeable future, volumetric stereolithography is expected to be further developed in many aspects, such as resolution, process and physical system, and combined with various fields.