This reviews describes the requirement of ion channel function for viral infection. Also discussed is how viral infections can result in acquired channelopathies by altering ion channels. Ion channel modulators may be useful in treating both of these aspects.

The human “channelome” contains over 300 known channels [1] that selectively and rapidly transport ions across biological membranes in response to specific stimuli. Ion channels are present on the plasma membranes and organelles of all cells, where they regulate organelle ion homeostasis, mitochondrial function, inflammasome activation, action potential firing, membrane potential, cell volume, and autophagy [2][3][4][5]. Given their importance, it follows that their dysfunctions leads to human diseases, termed channelopathies [6]. These include disease states of the nervous [2], musculoskeletal [5], cardiovascular [7], and immune systems [8]. This has motivated research on compounds that can modulate ion channel activity; ~19% of current FDA-approved drugs are ion channel modulators, second only to drugs targeting G-protein coupled receptors [9][10].

Many viruses encode their own ion channels [11][12][13] termed “viroporins,” highlighting the importance of ionic balance during viral infection. This field has spurred intense research and several drugs that target viroporins have emerged (reviewed in [11]). More recent evidence highlights how viruses can regulate and/or depend on the ion channels expressed by host cells, highlighting them as new host targets for therapeutic intervention (reviewed by Hover et al., 2017) [14].

The involvement of Ca2+ channels during viral entry is now well-documented [15]. Fujioka et al. showed that influenza virus (IAV) hemagglutinin (HA) triggers intracellular [Ca2+] oscillations that are required for viral infection [16]. The initial modulation of Ca2+ by IAV was demonstrated using Förster resonance energy transfer (FRET)-based imaging of the Ca2+ sensor Yellow Cameleon (YC3.60). These oscillations in Ca2+ were mediated by a specific voltage-gated Ca2+ channel (CaV1.2) identified through siRNA silencing approaches. Assays subsequently revealed that IAV directly binds to CaV1.2 via the interaction of HA and a sialylated site on CaV1.2. Accordingly, IAV entry could be inhibited by diltiazem, a clinically available Ca2+ blocker, highlighting the potential of these compounds for drug repurposing.

Ebola virus (EBOV) also requires Ca2+ channels for its entry into host cells. EBOV enters cells through endolysosomes positive for both Niemann–Pick C1 (NPC1) and two-pore Ca2+ channel 2 (TPC2) [17]. To further characterise this pathway, Penny et al. expanded the pharmacology of TPCs using a virtual screen of ~1500 FDA-approved drugs. All identified TPC modulators were cross-referenced with two recent anti-EBOV screens, with four dopamine receptor antagonists and five oestrogen receptor modulators identified. As such, it was reasoned that these drugs exert their inhibitory effects on EBOV through the blockade of TPCs (Figure 1E), subsequently confirmed through EBOV virus-like particle (VLP) assays [18]. Das et al. further characterised the role of Ca2+ in EBOV entry using single-molecule FRET (smFRET)-imaging. It was shown that Ca2+ and pH synergistically induce a conformational change in the EBOV glycoprotein GP2 (a key mediator of receptor binding and viral entry) to form a reversible intermediate state primed for NPC1 binding. NPC1 binding then further promotes the conformational transition into a fusion-ready “primed” state of invading EBOV virions [19]. 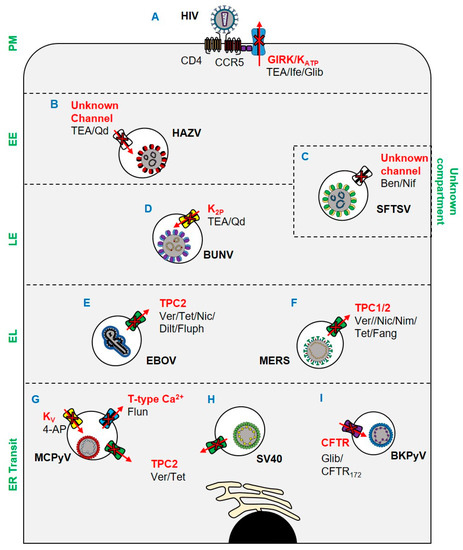 Of importance to the current pandemic, it has been shown that Middle East respiratory syndrome coronavirus (MERS) [20] is dependent on TPCs to escape endosomes [21]. As an enveloped virus, MERS must fuse its envelope with host membranes to enter cells. Following receptor attachment, MERS particles can fuse at either the cell surface or intracellularly in the endosomal network. Fusion is mediated by the proteolytic cleavage of the viral spike (S) protein at its S1/S2 site. At the surface of the cell, this proteolytic event is facilitated by TMPRSS2, which in turn precludes exposure of the fusion loop and coalescence of host and viral membranes [22]. Alternatively, fusion can occur in late endosomes following translocation through the endocytic network and proteolytic processing by proprotein convertases, including furin, in a process regulated by Ca2+ [23][24]. In studies by Gunaratne et al., genetic silencing of TPC1 and TPC2 prevented the entry of pseudotyped MERS (Figure 1F). The dependence of MERS upon TPCs was further demonstrated through its inhibition by tetrandrine and fangchinoline (TPC inhibitors), which prevented a post-internalisation but pre-fusion entry event. The mechanism through which TPC blockade inhibited MERS was multi-faceted: TPC1 and TPC2 silencing impaired furin activity, whilst pharmacological and genetic inhibition of TPC1 impaired endosomal motility. Of note, the related SARS-CoV-2, the causative agent of COVID-19 [25][26], was similarly inhibited by TPC blockade. Specifically, treatment of cells with tetrandrine reduced the entry of a lentiviral vector pseudotyped with the SARS-CoV-2 S (spike) [27].

The bunyavirus severe fever with thrombocytopenia syndrome virus (SFTSV) is an emerging arbovirus with fatality rates of 12–50% and the potential to cause future pandemics [28]. Using a library of FDA-approved drugs, the Ca2+ channel blockers benidipine hydrochloride and nifedipine were shown to inhibit SFTSV infection (Figure 1C), with in vivo activity confirmed using C57BL/6 and humanised mouse models. Through a retrospective analysis of human SFTSV cases, clinical evidence of the efficacy of nifedipine as an anti-SFTSV therapeutic was also demonstrated. A cohort of patients receiving nifedipine prior to and during hospital admission showed enhanced viral clearance and reduced frequency of neurological syndromes, often associated with fatal outcomes [29][30]. The fatality rate of patients receiving nifedipine was reduced 5-fold compared to untreated patients, which corresponded to abnormal serum Ca2+ levels at admission. The viral processes through which SFTSV requires Ca2+ channels were subsequently shown to be during virus internalisation and genome replication.

The involvement of K+ channels in viral entry has been extensively characterised for the model bunyaviruses Bunyamwera orthobunyavirus (BUNV); and Hazara orthononairovirus (HAZV), a model for Crimean Congo haemorrhagic fever virus, which causes severe viral haemorrhagic fever outbreaks, with a case fatality rate of up to 40%. Initial work using known K+ channel pharmacology suggested that the blockade of two-pore K+ channels (K2P) inhibited the early stages of the BUNV lifecycle (Figure 1D) [31]. Subsequent work identified both acidic pH and K+ in endosomes as crucial biochemical cues for the endosomal escape of BUNV [32]. Similar studies in HAZV highlighted a dependence on K+ channels for infection, and that K+ primarily accumulated in cholesterol-rich endosomes (Figure 1B) [32][33][34]. The K+ dependence of HAZV involves the glycoprotein spikes; a change in K+ concentration triggers conformational changes in the glycoproteins, as revealed through cryo-electron tomography of HAZV virions incubated with K+ that “primed” them for insertion into target membranes (Figure 2A). Moreover, it was shown that both BUNV and HAZV could be “primed” in vitro in buffers containing high [K+], which expedited entry and subsequent viral gene expression. This phenomenon was analogous to earlier studies for IAV, in which acid bypass in the presence of K+ revealed that the exposure of IAV virions to low pH and high [K+] weakened interactions between the M1 matrix protein and ribonucleoprotein (RNP) bundles, a pre-requisite for genome release (Figure 2B). The exposure of IAV virions to K+ therefore drives viral uncoating and expedites IAV infection [35].

Figure 2. Predicted mechanisms of ion channel dependence for two enveloped viruses. (A(i)) HAZV is endocytosed by an undefined mechanism. (A(ii)) Endosomal K+ influx triggers a conformational change in the HAZV glycoprotein spikes to a fusion-ready state. (A(iii)) Host and viral membranes fuse and RNPs are liberated into the cytosol. (B(i)) IAV is endocytosed via a clathrin-dependent or independent mechanism. (B(ii)) The virus traffics to late endosomes where the M2 viroporin is activated by acidic pH. (B(iii)) The influx of K+ and H+ destabilises matrix-RNP interactions in the core. (B(iv)) At low pH, a conformational change in HA promotes fusion and RNP release.

The reliance of viruses upon ion channels is not restricted to RNA viruses. It was recently shown that both K+ and Ca2+ channels are important host factors for polyomavirus infection [39]. Using a panel of ion channel modulators, the entry of Merkel cell polyomavirus (MCPyV), the causative agent of Merkel cell carcinoma (MCC), was shown to be sensitive to 4-aminopyridine (4-AP), a blocker of voltage-gated K+ (KV) channels (Figure 1G). Moreover, both MCPyV and Simian virus 40 (SV40) (Figure 1H) were sensitive to verapamil, a broad-spectrum Ca2+ channel blocker. The identities of the Ca2+ channels involved in polyomavirus entry were further explored, revealing a requirement for transient (T-type, low-voltage activated) channel family members in MCPyV infection but not SV40. Tetrandrine, a TPC blocker, restricted both viruses. The role of TPCs was found to be during endoplasmic reticulum (ER) disassembly and/or ER docking for SV40 [40], which may be explained by the recent demonstration that Ca2+ ions mediate the stabilization of SV40 capsids and contribute to its disassembly [41].

BK polyomavirus (BKPyV) is a potentially fatal pathogen in patients undergoing solid organ transplantation. Panou et al. demonstrated that the pharmacological and genetic disruption of the cystic fibrosis transmembrane conductance regulator (CFTR) Cl− channel could reduce BKPyV infection in primary kidney cell models (Figure 1I) [42]. Time of addition assays using the CFTR inhibitors CFTR172 and glibenclamide, combined with the assessment of exposure of VP2/VP3 minor capsid proteins, indicated a role for CFTR in the trafficking of BKPyV to the ER. Whilst the mechanism of CFTR involvement in BKPyV ER trafficking remains unclear, it is hypothesised that the channel may be important in the acidification and ER docking of BKPyV-containing endosomes. CFTR has been implicated in the fusion of endosomes [43], and co-localises with vacuolar ATPase (vATPase) to provide the counter-charge during endosomal acidification [44].