Several studies have shown that pathogenic mycobacteria use the protein or proteoglycan component of the extracellular matrix (ECM) for adherence and invasion of the host [16]. One of the best characterized mycobacterial adhesins is the heparin-binding hemagglutinin (HBHA), initially identified in Mycobacterium tuberculosis and Mycobacterium bovis bacillus Calmette-Guérin (BCG) [17][18]. However, HBHA-like molecules are also present in many other mycobacteria, both pathogenic and nonpathogenic [19][20][21][22]. HBHA is located on the surface of the mycobacteria and mediates binding of the bacilli to epithelial cells and fibroblasts [18] by interacting with sulfated glycoconjugates present on the surfaces of host cells [23]. It also plays a role in the dissemination of M. tuberculosis from the lungs to deeper tissues [24] and has shown promise as a diagnostic target for the detection of latent tuberculosis in humans [25][26][27][28].

2. Adherence of M. intracellulare to Epithelial Cells is Modulated by Heparin and Laminin

Previous reports have shown that adherence of mycobacteria to epithelial cells can be modulated by the addition of an extracellular matrix component [18][32]. Using the recombinant M. intracellulare strain, we tested whether soluble exogenous heparin or laminin can affect the cytoadherence of M. intracellulare to A549 epithelial cells. As observed qualitatively by fluorescence microscopy in Figure 1A, the recombinant M. intracellulare (green) is able to adhere to the A549 epithelial cells, stained with Blue Evans (red). Adherence is inhibited by the addition of heparin and enhanced in the presence of laminin. Quantification of M. intracellulare adherence by luciferase assay indicated that this adhesion to epithelial cells was significantly decreased from 50 to 60% in the presence of exogenous heparin but increased from 35 to 50% in the presence of exogenous laminin (Figure 1B). The diagram in Figure 1C explains how heparin and laminin can modulate the adhesion of bacteria to cells. The addition of heparin decreases the adhesion of bacteria to cells because it represents targets in competition with the heparin present in cell membranes. Conversely, the addition of laminin will indirectly increase the adhesion of bacteria to the cells via the laminin receptor (Figure 1C). 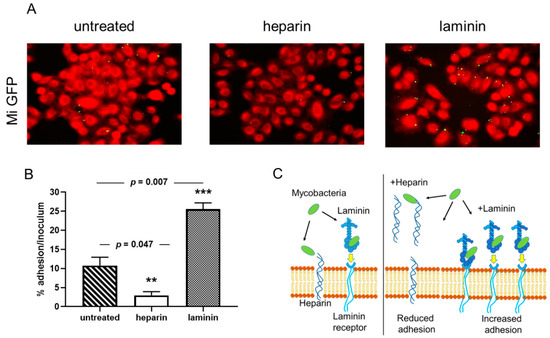 Figure 1. Cytoadherence of M. intracellulare ATCC13950 to A549 epithelial cells inhibited heparin and increased by laminin. A549 cells were infected by Green fluorescent protein (GFP)- and luciferase-producing M. intracellulare ATCC13950 in the presence or absence of heparin or laminin. (A) Fluorescence microscopy analysis of the A549 cells infected by M. intracellulare /GFPlux (green). The samples were fixed with PFA and stained with Evans Blue (red). Images taken with 40× objectives represent the overlay of Evans Blue and GFP signals. (B) Quantification of M. intracellulare /GFPlux adherence by luciferase assays. The percentages of adhesion were calculated by the formula (cell-associated RLU/RLU of the inoculum) × 100. The graph shows the averages of triplicate samples from one representative of three independent experiments. ** p < 0.05; *** p < 0.01. The error bars represent the standard deviation. (C) The diagram gives an illustration of how bacteria bind to cells, either directly on the heparin present on the surface of cells or via laminin which then binds to its cell receptor. In the presence of exogenous heparin or laminin, the adhesion of the bacteria is inhibited or increased.