The fundamental properties of a material can dramatically change when its dimensions are reduced nanometer scale. Metallic nanowires are one-dimensional nanostructures with diameters that are typically in a range of 10-200 nm, and lengths in a range of 5-100 µm. Metallic nanowires have many unique properties that are not seen in their bulk counterparts, such as good thermal and electrical conductivity, high aspect ratio, low sheet resistance, excellent optical transparency, etc. In the past two decades, research into metallic nanowires has encouraged breakthrough technologies in a variety of fields, including flexible transparent conductive films and electrodes, optoelectronic devices, molecular electronics, solar cells,  touch screens, biomedical science, chemical sensors, heat transfer enhancement, etc.

The great advancements achieved in the frontier of nanomaterial science has opened up a broad range of their applications [1]. As a useful one-dimensional (1D) nanostructure, metallic nanowires (NWs) have been extensively investigated for their unique properties, such as good thermal and electrical conductivity, high aspect ratio, good mechanical flexibility, excellent optical transparency, etc. On this basis, metallic NWs are being considered as multifunctional materials owing to their amazing behaviors, which are not seen in their bulk counterparts [2][3]. In the past two decades, research into 1D metallic NWs has encouraged breakthrough technologies in a variety of fields, including flexible transparent conductive films and electrodes [4][5][6], conductive polymer nanocomposites [7], touch sensors [8][9], photovoltaic (PV) cells [10][11], electrochromic devices (ECD) [12], wearable optoelectronic devices [13], and thermal energy storage (TES) [14]. The rapid advancement in the frontier of metallic NW technologies, particularly silver nanowires (AgNWs) and copper nanowires (CuNWs), has made them up-and-coming candidates for next generation engineering materials. Meanwhile, many synthesis methods have been developed to yield metallic NWs with uniform size at low cost thanks to the developed characterization techniques [15].

Due to their excellent thermal conductivity, metallic NWs can be used for heat transfer enhancement of solid or fluid. For example, since the building sector takes up almost 45% of energy consumption globally, enhancements to building energy efficiency and reduced reliance on air-conditioning systems is very important to achieve a sustainable future. Phase change materials (PCMs) are substances that absorb, store, and release thermal energy isothermally, and are therefore well suited for developing energy-efficient buildings, both actively and passively. The most commonly used solid-liquid PCMs fall into organic PCMs (e.g., paraffins and fatty acids) and inorganic PCMs (e.g., salt hydrates). However, the applications of PCMs are usually limited by their inherent low thermal conductivity, which could be overcome by dispersing thermally-conductive metallic NWs as the thermal conductivity promoter to improve the melting and freezing cycles.

CuNWs, with their high thermal conductivities, have been used to develop nano-enhanced PCMs (NePCMs) for building applications. Shah et al. [14] prepared CuNWs by disproportionation of a Cu+ precursor in octadecylamine (ODA). After purification, reddish nanostructures were obtained, and their structures were verified by TEM and XRD, as shown in Figure 1. The prepared CuNWs were incorporated into a hydrated CaCl2∙6H2O salt-based PCM and the corresponding thermal conductivities at different concentrations of CuNWs were measured. Their results showed that just 0.02 wt.% of CuNWs increased thermal conductivities by >20%, although it should be noted that the effect of diminishing returns is also observed past 0.08 wt.% of CuNWs (Figure 2). 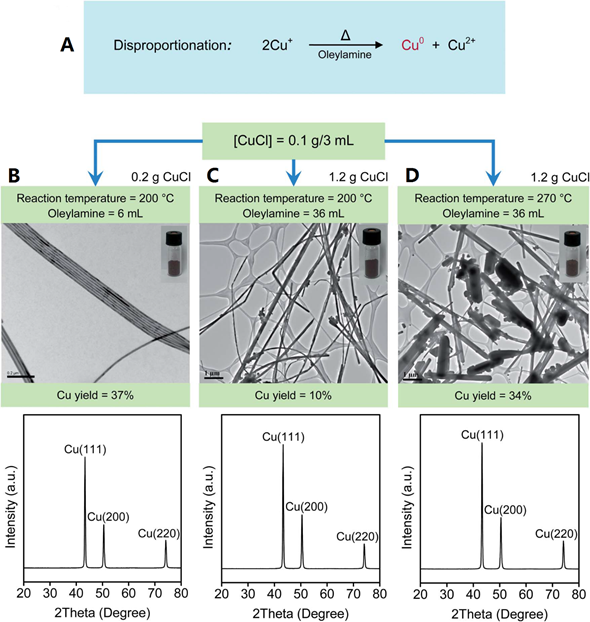 Figure 2. (A) Thermal conductivity enhancement of PCM (B). Schematic diagrams of heat transfer and dissipation in the pure PCM versus CuNW-doped PCM upon heating [14].

Similarly, one of the most important components in a building system is the air-conditioning, which heavily relies on the heat transfer between coolant and ambient air. However, most coolants, such as water, possess low thermal conductivity, leading to an increase in the system cost, since large surface area (e.g., mounting fins) is needed to ensure a high heat transfer efficiency. A similar situation also occurs in the harvesting of solar thermal energy. Metallic NWs can be suspended into the heat transfer fluid to form nanofluid which has a better heat transfer coefficient during heat exchange process.

Due to their excellent electricity conductivity, optical transmittance and flexibility, metallic NWs can be used to fabricate transparent conductive electrodes (TCEs). The TCE is an important component in many modern electronics and they are usually made of indium tin oxide (ITO) and fluorine-doped tin oxide (FTO). However, the above materials were shown to be highly brittle, and thus not suitable for flexible TCEs [25]. On the other hand, ITO and FTO are expensive and the indium resources are becoming less abundant due to the increased consumption [26]. On this basis, metallic NWs can be applied to replace the ITO and FTO-based TCEs.

Lin et al. [27], for example, developed a nonheated roll-to-roll (R2R) technique to produce flexible, ultra-large, and transparent AgNW network electrode film. The main feature of this technique is that the precursor solution was rapidly stretched into NWs by UV irradiation and by adding polyvinylpyrrolidone (PVP). The reduction of Ag ions only took 3 h without heating. Figure 3 shows that amorphous carbon skeleton was attached on the surface of AgNW, which is due to the degradation of polymer and PVP. The authors pointed out that the skeleton can offer sufficient mechanical strength without affecting the electrical conductivity of AgNWs. The AgNW/polyethylene terephthalate (PET) film showed a sheet resistance of ~15 Ω sq−1 and transmittance of 95%. In comparison to ITO electrochromic window (ECW), the AgNW ECW showed a shorter switching time of coloration (4.3 vs. 5.4 s), a higher electron-transfer rate, and a higher coloration efficiency (120 vs. 80 cm2 C−1), as shown in Figure 4. 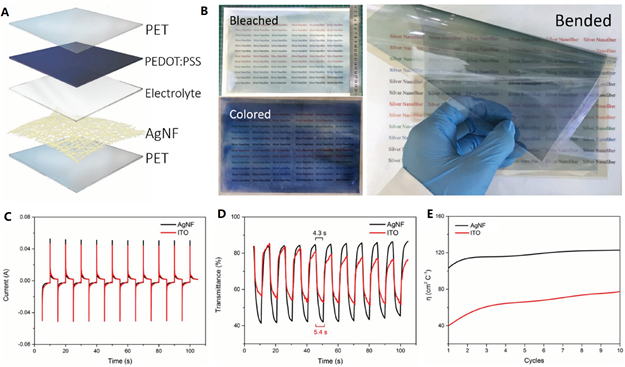 Metallic NWs-based TCEs can be also used in solar cells. For example, Kim et al. [28] have fabricated hybrid PV devices by a combination of poly(3-hexylthiophene) (P3HT) and [6,6]-phenyl C61-butyric acid methyl ester (PCBM) with ratio of 1:0.7. 20 wt.% of AgNWs, which was spin coated into the active to improve the photovoltaic (PV) performance, as shown in Figure 23. The AgNW-embedded PV device showed a power conversion efficiency (PCE) of 3.91%, high short-circuit current density (JSC) of 9.32 mA cm−2, fill factor (FF) of 63.6%, and open-circuit voltage (VOC) of 0.66 V.