Monochromatic X-ray has a single energy level in contrast to white X-rays used in conventional radiation therapy. Irradiation of high Z elements such as gadolinium, gold and silver with a monochromatic X-ray can result in photoelectric effects that includes the release of the Auger electrons that have strong cell killing effect. To apply this principle to cancer therapy, various nanoparticles loaded with high Z elements have been developed that enabled high Z elements to be delivered to tumor. The recent addition is gadolinium-loaded mesoporous silica nanoparticle (Gd-MSN). Tumor spheroids have been used as a convenient tumor model to demonstrate that monochromatic X-rays with energy level at or higher than the K-edge energy of gadolinium can destruct tumor mass that has Gd-MSN distributed throughout tumor spheroids.

While conventional radiation therapy uses white X-rays that consist of a mixture of X-ray waves with various energy levels, a monochromatic X-ray (monoenergetic X-ray) has a single energy level. Irradiation of high-Z elements such as gold, silver or gadolinium with a synchrotron-generated monochromatic X-rays with the energy at or higher than their K-edge energy causes a photoelectric effect that includes release of the Auger electrons that induce DNA damage—leading to cell killing.

2. Monochromatic X-ray and the Auger Effect

X-rays are electromagnetic waves in the wave length range of one picometer to ten nanometers [10]. Current radiation therapy uses white X-rays which are mixtures of these X-ray waves. By using a monochromator, the white X-ray can be separated into monochromatic X-rays each having a single energy level [11][12] and they can be used for radiation therapy. In addition, monochromatic X-rays have been used for imaging studies [13] to obtain sharper images. Currently, the best source for monochromatic X-ray is to use synchrotrons that generate intense X-ray beams. A synchrotron accelerates electrons to extremely high energy and then direct them to change directions by the use of magnets (bending magnets). The X-ray beams emitted from a bending magnet are directed to beamlines that are placed surrounding the synchrotron ring.

Irradiation of high-Z element such as gold, silver or gadolinium with a monochromatic X-ray causes photoelectric effect involving inner shell ionization. Destabilization of an atom is corrected by the release of photons and electrons. Figure 1 depicts one outcome that involves the release of the Auger electrons reported by Pierre Auger [14]. In this scenario, when gadolinium is irradiated with the monochromatic X-ray having an energy at or higher than the K-edge energy of gadolinium, an electron in the K-shell will be kicked out of the atom. This results in the movement of an electron from outer shell to the K-shell. This releases energy which is then used to kick out other electrons from the atom. Thus, the series of events lead to the release of electrons. If an element other than gadolinium is used, then the monochromatic X-ray energy needs to be adjusted so that it is higher than the K-edge energy of the particular element. The electrons released are called the Auger electrons that possess strong cell killing effect that involves DNA strand breaks by direct effect as well as by indirect effect mediated by radicals. In addition, cell membrane damages may be induced by the Auger electrons. In addition, a bystander effect on non-exposed cells could occur. However, due to short mean free path, the effect is relatively confined within the cancer cell. Occurrence of these electrons was reported in 1922 by Lise Meitner (discussed in [15]). 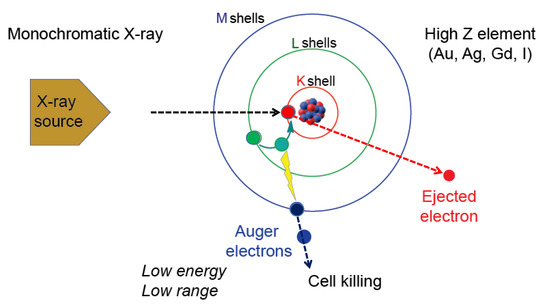 Figure 1. The Auger effect. Irradiation of high-Z element such as Au, Ag, Gd or I with a monochromatic X-ray having a defined energy level causes effects that include ejection of a K-shell electron (red circle). One of the ways to reestablish energy equilibrium is the movement of an electron from a higher shell (green circle) causing the release of energy that is used by another electron (blue circle) which is released as an Auger electron. The Auger electron has strong cell killing effect.

Thus, the effect of monochromatic X-rays can be amplified by the use of high-Z elements, raising the possibility that the Auger effect-based cancer therapy can be developed. There has been a quest to develop the Auger therapy (reviewed in [15][16][17][18][19][20]). In early studies, biologic effect of 125I-nucleotides incorporated into DNA was examined, as they undergo natural decay resulting in the release of Auger electrons. The study uncovered cell killing effect including DNA cleavage. Subsequently, photon-activation therapy (PAT) was examined. Various studies using cancer cells as well as animal tumor models have been carried out [15][16][17][18].

Monochromatic X-rays provide a valuable source for radiation therapy. This special type of X-ray with a single energy level can be obtained by separating a synchrotron-generated white X-ray by the use of a monochromator. Irradiation of high-Z elements such as gadolinium causes photoelectric effect including the release of Auger electrons. Various nanoparticles containing gadolinium have been developed for their effect to enhance radiation therapy and a recent addition to the growing list of such nanoparticles is gadolinium-loaded mesoporous silica nanoparticles (Gd–MSNs). These nanoparticles differ in their size and composition. Additional nanoparticles may be developed in the future. Thus, it will be important to evaluate their ability to enhance effect of X-ray irradiation. While cancer cell models and animal models will continue to be important, tumor organoid models provide versatile and convenient assays to examine their ability to cause destruction upon X-ray irradiation.

Anonymous
02 May 16:47:50
0
Congratulations on your valuable work
View more