The genus Diabrotica has over 400 described species, the majority of them neotropical. However, only three species of neotropical Diabrotica are considered agricultural pests, D. speciosa, D. balteata, and D. viridula. D. speciosa and D. balteata are polyphagous both as adults and during the larval stage. D. viridula are stenophagous during the larval stage, feeding essentially on maize roots, and polyphagous as adults. The larvae of the three species are pests on maize, but D. speciosa larvae also feed on potatoes and peanuts, while D. balteata larvae feed on beans and peanuts. None of these species express a winter/dry season egg diapause, like several North American species. Instead they have several continuous, latitude-mediated generations per year. This hinders the use of crop rotation as a management tool, although early planting can help in the temperate regions of the distribution of D. speciosa. Their know parasitoids do not exert much control on Diabrotica populations, or show potential for inundative biocontrol plans. Management options are limited to insecticide applications and Bt GM maize. Other techniques that show promise are products using Beauveria bassiana and Heterorhabditis bacteriophora, semiochemical attractants for monitoring purposes or as toxic baits, and plant resistance.

There a three pest Diabrotica in South America from over 400 described species in the genus, the majority of them neotropical.

The genus Diabrotica has over 400 described species [1], the majority of them neotropical, but only 7 species, plus six subspecies, are considered agricultural pests in the Americas [2]. Of these, only three species are considered agricultural pests in South America: D. speciosa (Germar) with subspecies speciosa and vigens, D. balteata (LeConte), and D. viridula (F.) (Figure 1). The genus Diabrotica is divided into three species groups: virgifera, fucata, and signifera [3][4]. However, studies on South American virgifera group species suggest that these groups are not as well defined as previously thought [5][6]. D. speciosa and D. balteata are in the fucata group, which is the group with the largest number of species. The species in this group that have been studied are polyphagous both as adults and during the larval stage. Another characteristic of the North American pest Diabrotica of the fucata species group is that they overwinter as adults and lack resistant stages to deal with harsh climatic conditions [2]. D. viridula is in the virgifera group, the same clade of the Northern, Western, and Mexican corn rootworms (Diabrotica barberi, Diabrotica virgifera virgifera, and Diabrotica virgifera zeae, respectively). The larvae of the North American species in the virgifera group feed exclusively on Poaceae [7], although the host range has been observed or tested for only a few of the species in the group [8]. The North American pest species in the virgifera species group are univoltine, or sometimes semivoltine, and possess diapausing eggs that allow them to overwinter in temperate climates or survive dry seasons in the subtropics [9][10], both situations during which the adult cannot find sustenance or survive the extreme conditions.

Figure 1. Photographs of the adult of the three species of pest Diabrotica from South America.

D. speciosa is distributed throughout South America, from agricultural patches in the temperate Patagonian steppes to the tropics, with the exception of Chile, and up to altitudes of over 2500 m above sea level [2][11] (Figure 2). It is the best studied Diabrotica species in South America due to its impact on many crops. The adult has over 132 recorded host species, in 24 different plant families [11, and literature therein]. Larval hosts are not as well known, but D. speciosa has at least five confirmed larval hosts: maize (Zea mays L.), wheat (Triticum spp.), Johnsongrass (Sorghum halepense Persoon), peanut (Arachis hypogaea L.), and potato (Solanum tuberosum L.). Another four plant species hosted full development in the laboratory [11][12][13][14][15]. However, the fact that larvae can develop on plant species in four families of three different orders suggests that there could be many more larval hosts that simply have not been discovered because of the hypogeous habit of the larva. 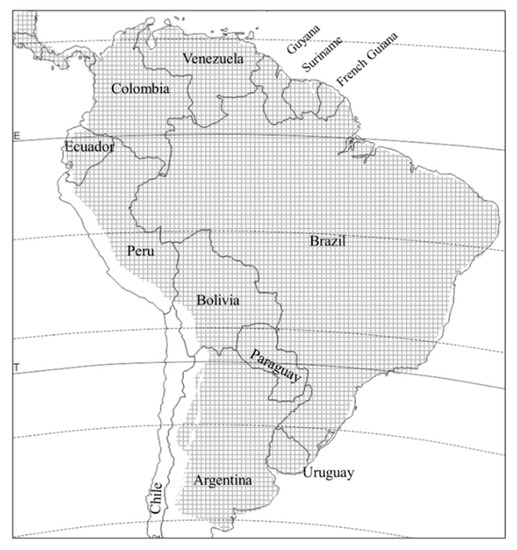 D. speciosa is documented in most crops in South America, but is considered mainly a horticultural pest as an adult, and a pest of potato, maize, and peanuts as larva [11][13][16]. Yet these generalizations are not without exceptions. In Brazil, this species is considered a pest of maize as a larva, and a minor pest as an adult as well [17][18]. It is also regarded as an important pest of potato during both the adult and larval stages, although this depends heavily on the cultivar [19]. In addition, the adult is also regarded as an important pest of seedlings and young plants of some extensive crops, such as soybeans, beans (Phaseolus vulgaris), cotton, sunflower, maize, tobacco, wheat, and canola [20][21][22], and, curiously, of table grapes [23] (Table 1).

D. balteata is found from subtropical North America through Central America and Caribbean islands including Cuba, Hispaniola, and Puerto Rico, to South America, although its distribution in South America is limited to Venezuela and Colombia [2][24], where it can occur at altitudes ranging from 0 to 2000 m [25]. However, there is insufficient data to infer species distribution patterns in either country. The adult of D. balteata also has an extremely wide range of host plants, as it has been documented on over 140 plant species [26]. There is a more conservative estimate of 50 species in 23 families, with a preference for plants in the Cucurbitaceae, Rosaceae, Fabaceae, and Brassicaceae [27]. The D. balteata adult is considered a pest on squash (Cucurbita spp., Cucurbitaceae), several bean species (P. vulgaris, Glycine max, Mucuna pruriens, and Vigna unguiculata, Fabaceae), lettuce (Lactuca sativa, Asteraceae), sugar cane (Saccharum officinarum, Poaceae), and potato [28]. Adults are also implicated in the transmission of the tomato brown rugose fruit virus (Tobamovirus, ToBRFV) to P. vulgaris [29], and other viruses of P. vulgaris and calapo (Calopogonium mucunoides Desv.) [30][31]. Larval damage is reported only from Colombia, where this species is known to attack beans, but as considered a minor problem [32], maize, on which it can be locally problematic [33][34], and peanuts, on which it is considered among the 10–12 worst pests in Colombia [35] (Table 1). It is considered a pest of sweetpotatoes in North America. The fact that these hosts are also from three families in three orders suggests that there could be many more larval hosts as well. In addition, phylogenetic studies indicate D. speciosa and D. balteata are sister clades [36].

D. viridula is distributed from Mexico to northern Argentina, and apparently absent in Uruguay and Chile (Figure 3). Like D. balteata, its distribution is primarily tropical and subtropical. The D. viridula adult is considered a minor pest of beans in Peru [37], while the larva is considered locally important on maize in Central America and Peru [38]. In greenhouse tests, both the larvae and the adults of this species were able to transmit maize chlorotic mottle virus (MCMV) to maize, and they are assumed to be one of its vectors in the field [39]. D. viridula is also assumed to be an important, albeit new, pest of maize roots in Argentina, Paraguay, and Brazil [11][40], but its damage cannot be differentiated from that of D. speciosa. Studies to clarify what proportion of the damage is owed to each species (e.g., collections of larvae directly in the field) have not been done. The larva has been found feeding on maize roots only, and in the laboratory, it developed successfully on wheat as well, but not on any of the species tested from outside the Poaceae, suggesting it is stenophagous during the larval stage [2][41]. As an adult it is polyphagous, albeit reduced to fewer hosts than D. speciosa and D. balteata, as it has been recorded only on 21 plant species in the Poacae, Cucurbitaceae, and Asteraceae [11] (Table 1). Yet, similarities with the North American species in the virgifera group end here, as D. viridula eggs do not diapause.

Evidence indicates that the three South American pest Diabrotica overwinter as adults, are multivoltine, and do not have diapausing eggs. A reproductive diapause has been observed for D. speciosa, at least for the populations from the temperate and higher subtropical areas, but the fact that it could be overridden by manipulating temperature and light hours suggests it may not exist in the lower latitudes [42].

As the North American corn rootworms in the virgifera species group overwinter as diapausing eggs, are univoltine, and have a narrow larval host range limited to maize and a few grasses, their life cycle is tightly coupled to the phenology of one or very few annual host species. This provides opportunities for the use of different management strategies to reduce damage levels on susceptible crops, such as crop rotation and manipulation of sowing dates [43][44], expected density functions based on preceding density data [45], and anticipation of adult appearance through degree-day models [46]. Also, as the eggs are found anywhere in the soil from before the crop is planted, different tillage techniques could be applied to hinder the larvae from reaching the roots, for instance, compacting the soil between rows, thus affecting neonate larval movement [47]. Furthermore, factors behind the recommencement and completion of embryonic development after winter in univoltine Diabrotica are fairly well understood, so it is possible to estimate a “fixed point” (or interval) for the conclusion of embryonic development of the egg bank laid during the previous season in any given area [48]. However, none of these options have been developed for multivoltine species.

Although it is certain that the South American pest Diabrotica are multivoltine, seasonal reproductive patterns are not well known for these species, yet different models indicate there could be around three generations a year, and in subtropical regions, no fewer than five. However, no obvious or discrete voltinism pattern could be observed, expressing, to all practical effects, continuous generations [49]. What is known of the reproductive biology of the other two pest species suggests the same may be expected for them. The practical implications of these studies were that the life history pattern of this pest seems to leave few management alternatives. In the temperate regions of this species’ distribution, early planting of maize could ensure that the first generations of larvae encounter more mature, and thus less susceptible stages of the crop. Other than this, the seasonal dispersion and unpredictability of D. speciosa outbreaks suggest that the only pre-emptive action available to protect maize crops from this pest is to plant Bt maize [49]. 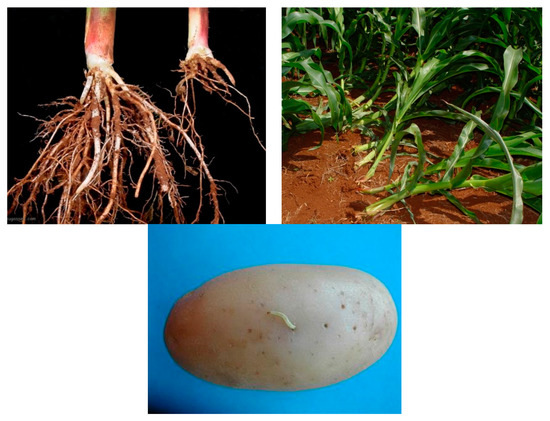 Apart from insecticide applications, the major innovation of applicable use of the last 30 years has been the introduction of GM maize. However, other techniques that show promise must continue to be explored, such as the use of toxic baits with semiochemical attractants to suppress adult populations and for monitoring purposes, IGR insecticides aimed at adults to reduce their progeny, development of plant resistance, and biological control using Heterorhabditis nematodes and entomopathogenic fungus against larvae. Insecticide + cucurbitacin baits also deserve a special mention, because this combination has proved to be an effective technique that probably warrants further development.

Pest Diabrotica in South America are widely regarded as important, but usually are not differentiated from other foliar pests or root-feeders when it comes to management. Farmers do not identify them among the worst pests, and seldom deploy specific control measures for these beetles, except for potatoes in Brazil, where producers consider D. speciosa to be the main pest. Yet, the actual impact of the larvae of D. speciosa and D. viridula, especially on maize, may not be properly assessed, and until that is done, we cannot be sure of the real importance of these pests.