Implication of P38 MAPK in drugs of abuse and stress

p38 mitogen-activated protein kinases (MAPKs) are key signaling molecules in cellular responses to external stresses and regulation of pro-inflammatory cytokines. Some studies have suggested that p38 MAPK in the region of the nucleus accumbens is involved in abnormal behavioral responses induced by drugs of abuse. In this entry, we recapitulate the role of the p38 MAPK in the rewarding effects of drugs of abuse. We also summarize the implication of p38 MAPK in stress, anxiety, and depression. We opine that p38 MAPK activation is more closely associated to stress-induced aversive responses rather than drug effects per se, in particular cocaine. p38 MAPK is only involved in cocaine reward, predominantly when promoted by stress. Downstream substrates of p38 that may contribute to the p38 MAPK associated-behavioral responses are proposed. Finally, we suggest p38 MAPK inhibitors as possible therapeutic interventions against stress-related disorders by potentially increasing resilience against stress and addiction relapse induced by adverse experiences.

The mitogen-activated protein kinase (MAPK) is a serine/threonine kinase that is activated through phosphorylation by a MAPK kinase (MKK), which is a “dual-specific” kinase that phosphorylates at both serine/threonine and tyrosine residues within a threonine/any amino acid/tyrosine (Thr X Tyr) motif, in which the middle amino acid is different for each MAPK [1]. Enzymes in the p38 MAPK module are subject to dual phosphorylation at the Thr-Gly-Tyr motif situated within the kinase activation loop and are primarily activated by various environmental stresses, including heat, osmotic and oxidative stresses, as well as inflammatory cytokines [2] (Figure 1). 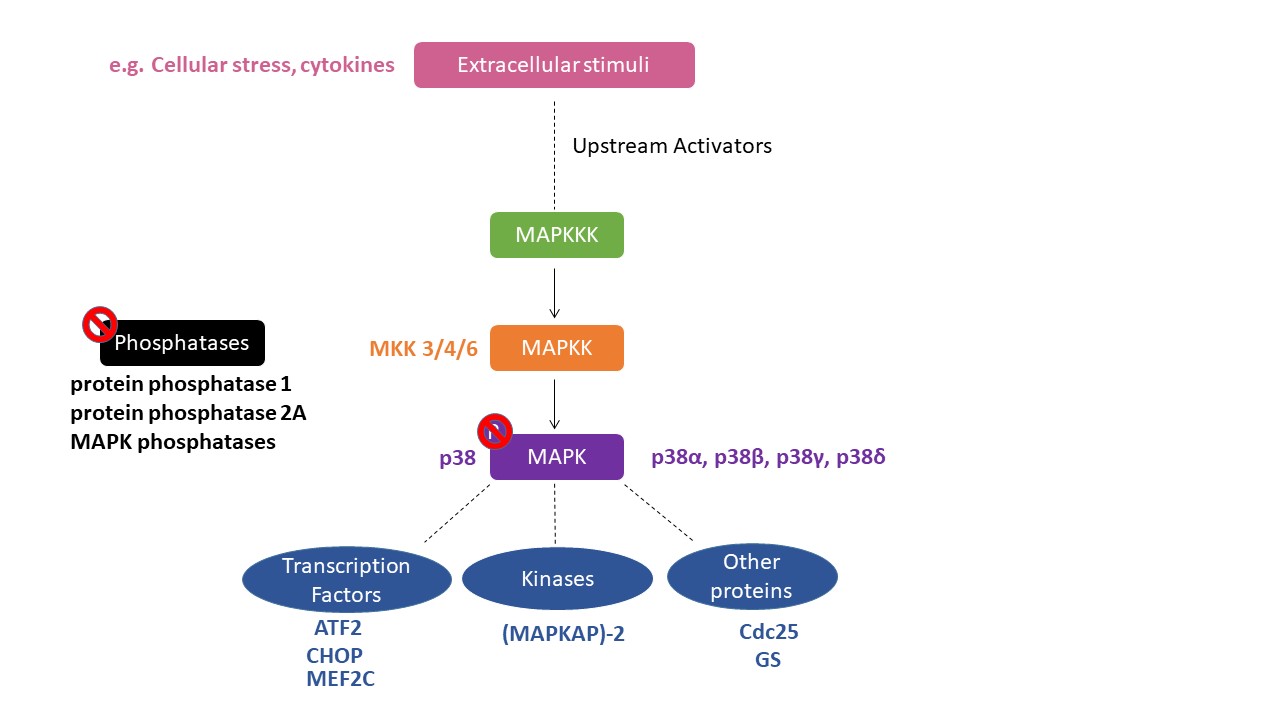 Figure 1. Schematic representation of the p38 mitogen-activated protein kinases (MAPK) signaling pathway. A variety of extracellular signals, such as cellular stress and cytokines, can activate the p38 MAPK pathway. This leads to the initiation of MAPK phosphorylation cascade, in which MAPKKK phosphorylate the p38 MAPK-specific MAPKKs MKK3, MKK4, or MKK6. Subsequently, the four isoforms of p38 MAPK (α, β, δ, and γ) are phosphorylated, thereby activating various p38 MAPK substrates. Substrates can be transcription factors such as ATF2, CHOP, and MEF2C, protein kinases such as (MAPKAP)-2 as well as other proteins such as Cdc25 and GS. Phosphorylated substrates go on to elicit varied biological responses. The duration of signaling is controlled by phosphatases such as protein phosphatase 1; protein phosphatase 2A or MAPK phosphatase. Abbreviations: CHOP, CCAAT/enhancer-binding protein-homologous protein; MEF2C, myocyte enhancer factor 2C; (MAPKAP)-2, MAPK-activated protein; GS, Glycogen synthase.

2. Role of p38 MAPK in the Rewarding Effects of Drugs of Abuse

Some studies have suggested that p38 MAPK in the region of the nucleus accumbens (NAc) is involved in abnormal behavioral responses induced by drugs of abuse. The rewarding effects of drugs of abuse can be assessed by conditioned place preference (CPP) in which animals can  associate drugs' effects to a specific context, and "prefer" to spend more time in the drug-associated compartment when the drug is pleasurable (Figure 2). 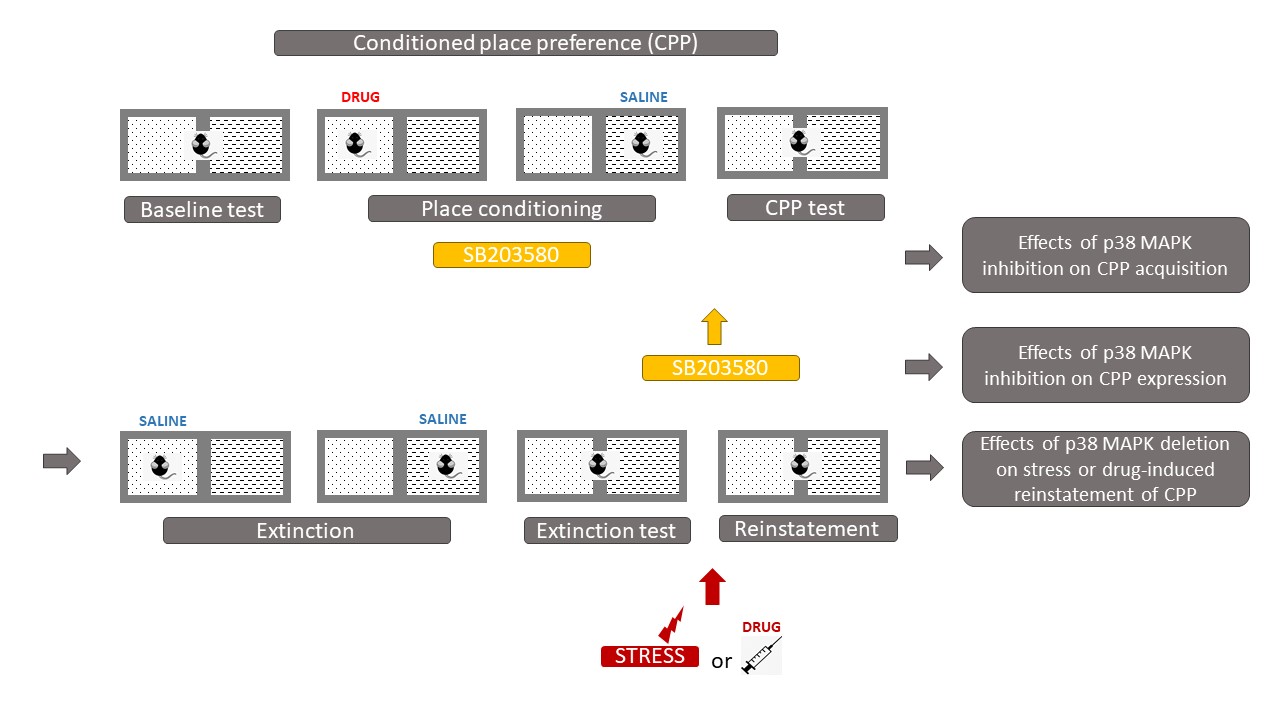 Figure 2. conditioned place preference (CPP). In the pre-conditioning day or baseline test, animals (such as mice) are allowed to freely explore the entire apparatus. The time that mice spend in each compartment is recorded to show the natural preference of animals. During conditioning, mice are randomly assigned to their drug and saline training compartments for the training sessions. Conditioned preference is assessed by allowing the mice to roam freely in all the compartments and recording the time spent in each. When the p38 MAPK inhibitor, SB203580, is injected before DRUG conditioning (the stimulus), the effects of p38 inhibition on CPP acquisition are investigated. Likewise, when SB203580 is injected before the CPP test, the effects of p38 inhibition on CPP expression are explored. After the CPP expression, mice can undergo extinction of CPP, during which they are conditioned repeatedly to saline in both compartments. By conditioning the animals with saline in their previous DRUG-associated compartment, mice progressively lose their preference to the compartment associated to the DRUG. When the animals reach the extinction criteria, which is checked by an extinction test, they can be tested for reinstatement of CPP. Reinstatement can be induced by an exposure to stress (stress-induced reinstatement of CPP) or also, by an exposure to a priming injection of the DRUG (drug-induced reinstatement). Place preference during reinstatement of CPP is again determined by allowing the mice to freely explore all the compartments of CPP.

Gerdjikov et al. showed that NAc injections of the  p38 kinase inhibitor SB203580 dose-dependently impaired acquisition of amphetamine CPP [3].  Moreover, several studies showed that repeated morphine treatment  increased the phosphorylation of p38 in the NAc [4] [5]. Consistently, the microinjection of SB203580 into the NAc prior to the administration of morphine or intraperitoneal (i.p.) injections of SB203580 prevented the acquisition of CPP and inhibited the activation of p38 [4] [5] [6] . Following the acquisition of morphine CPP, a SB203580 injection failed to block the expression of morphine CPP [5] [7]. At the contrary to morphine, cocaine CPP does not induce p38 activation in the NAc [8]. Moreover, p38 activation in the NAc shell sub-division is decreased by social interaction reward, when social interaction is paired with one compartment of the CPP [8]. Studies that performed intracerebroventricular (icv) injections of SB203580 before cocaine training found no effect on cocaine CPP [9] [10]. Consistently, the deletion of p38α in the serotonergic neurons of the dorsal raphe nucleus (DRN) [11] or the conditional knock-out of p38α MAPK in the dopaminergic neurons of the ventral tegmental area (VTA) [12] does not affect cocaine CPP, suggesting that the deletion of p38α does not alter the associative learning required for place preference or the rewarding properties of cocaine. Interestingly, serotonergic p38α MAPK deletion blocked the reinstatement of cocaine preference induced by stress, but not by cocaine priming, thereby showing that serotonergic p38α MAPK deletion selectively alters only the stress-induced modulation of cocaine-seeking behaviors [11]. Therefore, p38 is considered to be more closely related to stress modulation than to cocaine treatment. Indeed, rats receiving corticotropin-releasing factor (CRF) icv injections before cocaine conditioning showed an increase in cocaine CPP, whereas those receiving icv injections of the non-selective antagonist alpha-helical CRF (α CRF) showed a decrease in cocaine CPP [10]. Remarkably, when social interaction was made available in the alternative compartment, CRF-induced increase of cocaine preference was reversed completely to the level of rats receiving cocaine paired with α CRF. This reversal of cocaine preference was also paralleled by a reversal in altered behavioral sequencing of grooming, considered as a marker of stress [13]  and by a CRF-induced increase of p38 MAPK expression in the NAc shell [10]. These results show that social interaction has anti-stress effects and that the modulation of the CRF system has a direct impact on p38 MAPK expression in the NAc shell, as p38 MAPK expression was increased after icv CRF injections prior to each cocaine conditioning and was decreased after icv injections of α CRF prior to each cocaine conditioning [10].

3.  Role of p38 MAPK in Stress, Anxiety, and Depression

Sustained stressful experience can lead to maladaptive responses, including clinical depression, anxiety, and an increased risk for drug addiction [14] [15]. After stress exposure, p38 MAPK is generally activated in different brain regions. Repeated forced swim stress activated p38 MAPK in the cortex, the hippocampus, and the NAc [9], which decreased significantly following a pretreatment with SB203580 before bouts of forced swimming [9]. pp38 levels were also increased in the prefrontal cortex (PFC) after cold exposure [16], in the hippocampus after enhanced single prolonged stress [17] and in the DRN after social defeat stress [11]. Additionally, a significant positive correlation was found between early life stress and the percentage of monocytes staining positive for pp38 [18].  Neuro-inflammation, in response to bacterial endotoxin lipopolysaccharide (LPS)-induced depressive-like behaviors, has been reported to be accompanied by increased levels of pp38 in the habenula [19]. Both the p38 inhibitor SB203580 and the anti-depressant fluoxetine normalized the changes in p38 phosphorylation and reversed the depressive-like behaviors [19]. Interestingly, the depletion of neuronal p38α in mice resulted specifically in increased anxiety-related behaviors without affecting learning and memory processes or motor coordination and muscle function [20]. p38 activation appears to be an important mediator of KOR-induced aversive stress effects through G-protein-coupled receptor kinase 3 (GRK3)/β-arrestin, a KOR-associated protein, dependent mechanisms [9] [21]. Inhibition of p38 MAPK was found to block stress-induced behavioral responses, including aversive responses to the KOR agonist U50, 488 [9] [22]. Importantly, cell-specific deletion of p38α MAPK in serotonergic neurons blocked stress-induced aversion [11]. These effects seem to be regulated by KOR as KOR knockout (KO) mice did not develop conditioned place aversion (CPA) to U50,488; however, re-expression of KOR in the serotonergic neurons of the DRN or in the dopaminergic neurons of the VTA of KOR KO mice activated p38 and restored place aversion [12] [23].

One possible mechanism encoding the behavior responses to stress is a change in gene expression downstream to p38 [9]. One candidate is zif268, whose induction is p38-dependent [9]. Another possible substrate of pp38 that may contribute to the behavioral responses is the serotonin transporter (SERT). Stress-induced p38α MAPK caused translocation of SERT to the plasma membrane in the brain, thereby increasing the rate of transmitter uptake at serotonergic nerve terminals and inducing a hypo-serotonergic state that underlies depression-like and drug-seeking behaviors [11]. A third possible candidate could involve the modulation of proteins related to synaptic plasticity, such as AMPA receptors. p38 MAPK signaling has been shown to be an important mediator of AMPA receptor surface trafficking during synaptic plasticity in which activation of p38 MAPK may lead to synaptic removal of surface AMPA receptors [24] [25]. One additional target of p38 relevant to depression could involve the glucocorticoid receptor (GR). p38 signaling pathways have been shown to be implicated in the inhibition of GR function. Indeed, activation of p38 MAPK has been demonstrated to disrupt transactivation of the GR [26], leading potentially to glucocorticoid resistance or decreased responsiveness to glucocorticoids, a primary feature of major depression [27]. Figure 3 summarizes the possible substrates that may contribute to the behavioral responses associated to p38 MAPK.

It appears that p38 MAPK activation is more closely associated to stress-induced aversive responses rather than drug effects per se. Mostly, studies show that p38 MAPK activation is only involved in cocaine reward, predominantly when promoted by stress. However, it remains open to discussion how p38 MAPK is implicated in CPP morphine acquisition. It could be that morphine might activate KOR as well as µ opioid receptors (MOR) or that MOR opioids could to some extent induce activation of p38. In conclusion, understanding the molecular and cellular mechanisms that control stress-induced behaviors could explain the neurobiological mechanisms involved in depression and addiction-like behaviors and provides insight to potential therapeutic targets.  Indeed, p38 MAPK inhibitors have been studied extensively in both preclinical experiments and clinical trials for inflammatory diseases. Here, we opine that p38 MAPK inhibitors are of growing interest as possible therapeutic interventions against stress-related disorders by potentially increasing resilience against stress and addiction relapse induced by adverse experiences.