In only a few months after initial discovery in Wuhan, China, SARS-CoV-2 and the associated coronavirus disease 2019 (COVID-19) have become a global pandemic causing significant mortality and morbidity and implementation of strict isolation measures. In the absence of vaccines and effective therapeutics, reliable serological testing must be a key element of public health policy to control further spread of the disease and gradually remove quarantine measures. Serological diagnostic tests are being increasingly used to provide a broader understanding of COVID-19 incidence and to assess immunity status in the population. However, there are discrepancies between claimed and actual performance data for serological diagnostic tests on the market. In this study, we conducted a review of independent studies evaluating the performance of SARS-CoV-2 serological tests. We found significant variability in the accuracy of marketed tests and highlight several lab-based and point-of-care rapid serological tests with high levels of performance. The findings of this review highlight the need for ongoing independent evaluations of commercialized COVID-19 diagnostic tests.

Coronavirus disease 2019 (COVID-19) was first discovered in a cluster of patients with severe respiratory symptoms in Hubei Province, China, in December 2019. The early nucleic acid analysis of known pathogen panels led to negative results, suggesting the causative agent was of unknown origin. By early January 2020, analysis of bronchoalveolar lavage (BAL) fluid from infected patients revealed a pathogen, later named SARS-CoV-2, with 50%, 80%, and 96% genetic sequence overlap to the genome of the Middle East respiratory syndrome virus (MERS-CoV), the severe acute respiratory syndrome virus (SARS-CoV), and bat coronavirus RaTG13, respectively [1][2]. Like SARS-CoV and MERS-CoV, SARS-CoV-2 is a single-stranded RNA virus belonging to the beta genus Coronavirus in the Coronaviridae family [3].

As SARS-CoV-2 can be transmitted from human to human, the disease has spread swiftly to over 200 countries, infecting nearly 6 million people and resulting in at least 350,000 deaths worldwide (as of 27 May 2020) [4]. An unprecedented and rapidly growing global effort is underway to develop COVID-19 vaccines and therapeutics, but at the time of this review, there are no vaccines, and only one antiviral drug (remdesivir) with modest clinical benefit has been approved under the U.S. Food and Drug Administration (FDA) Emergency Use Authorization (EUA) [5][6]. Under these circumstances, countries were forced to implement physical distancing measures to control the outbreak and, in the process, place approximately 3 billion people under lockdown.

In any infectious disease outbreak, accurate and accessible diagnostic testing must be one of the pillars of control-measure policies to understand and minimize the spread of disease. The epidemiological studies of the outbreak in China estimated the proportion of undetected COVID-19 cases to be as high as 86% [7]. As asymptomatic or mild cases could play a significant role in the transmission and spread of the SARS-CoV-2 virus [7][8], symptoms alone are not reliable diagnostic markers. There are two major types of diagnostic technologies available to address this: molecular and serological tests. Currently, much of the focus is on the SARS-CoV-2 molecular test, which can detect, with high accuracy, the virus-specific RNA molecules circulating in the host body. The gold-standard molecular test is based on reverse transcriptase polymerase chain reaction (RT-PCR) technology. However, the PCR test is not useful in distinguishing between highly infective viruses versus ones that have been neutralized by the host, and it cannot assess immunity status against SARS-CoV-2 [9]. Serologically based antibody tests can complement molecularly based tests by providing a more accurate estimate of SARS-CoV-2 incidence and by potentially detecting individuals with immunity against the disease, as these tests detect markers of the immune response.

In humoral immune response to infection, pathogen-specific antibodies, produced by B cells, neutralize and prevent further spread of the disease. The activation and differentiation of B cells into antibody-secreting plasma B cells are triggered by a cascade of events involving virus digestion by antigen-presenting cells (e.g., dendritic cells, macrophages) and presentation of virus-specific antigens to helper T cells (Figure 1). Antibodies protect the host by binding to specific antigens (proteins) on the virus to neutralize its fusion and entry into the host cell and facilitate recognition and killing by phagocytic immune cells [10]. In humans, three types of antibodies or immunoglobulins have been the target of COVID-19 serological tests: IgM, IgG, and IgA. Although the dynamics of the immune response in COVID-19 are not fully understood, typically IgM antibodies are produced by host immune cells during the early stages of a viral infection. IgG is often the most abundant antibody in the blood and plays a more prominent role in the later stages of infection and in establishing long-term immune memory [11]. While IgM and IgG antibodies have been the leading candidates in COVID-19 serological test development, recent studies show that IgA, predominately present in the mucosal tissue, may also play a critical role in the immune response and disease progression [12].

Figure 1. The human antibody response to SARS-CoV-2 infection. (1) The SARS-CoV-2 virus enters the host cell via interaction between viral spike (S) and host angiotensin-converting enzyme 2 (ACE2) proteins. (2,3) Following replication and release from the host cells, a subset of viruses will be engulfed and digested by antigen-presenting cells (APCs) like macrophages or dendritic cells. (4) Fragmented SARS-CoV-2 antigen(s) will be presented to T helper cells, which in turn will interact and activate B cells. (5) Activated B cells will proliferate and differentiate into plasma or memory B cells with high-affinity binding receptors for the original SARS-CoV-2 antigen. Plasma cells secrete their SARS-CoV-2-specific receptors in the form of IgM, IgG, or IgA antibodies. (6) Antibody-mediated neutralization occurs when SARS-CoV-2-specific antibodies bind to viral antigen(s) and prevent virus interaction and entry into host cells.

The urgent need for the development of serological diagnostic tests in response to the COVID-19 outbreak has compelled regulatory bodies to implement emergency use authorization programs to expedite the commercialization process of these tests. In light of this, independent and robust post-market evaluations of COVID-19 serological tests are needed to confirm manufacturers’ performance claims. The basic measures of quantifying diagnostic test performance are sensitivity and specificity. Sensitivity is the ability of a test to detect the disease agent or the host’s response to the disease (i.e., antibodies) when it is truly present, whereas specificity is the ability of a test to correctly return a negative result when disease or host response is absent [13].

We conducted a systematic review of independent studies that assessed the performance of currently available SARS-CoV-2 serological tests. We included studies that reported sensitivity and specificity, stage of disease (early, intermediate, or late), the test format (CLIA, ELISA, RDT), and antibody target (IgA, IgG, IgM, or IgG + IgM) [14][15]. If available, the SARS-CoV-2 antigens used for antibody detection was recorded. The studies that did not specify the disease stage of test samples were grouped under the “overall” category and assessed separately. In total, we reviewed performance data on 5 serological CLIA tests, 15 serological ELISA tests, and 42 serological RDTs currently on the market.

The distribution plot of the data shows a higher degree of variability in test sensitivity values compared to specificity (Figure 2). This level of variability further emphasizes the need for independent evaluations of serological tests on the market. The sensitivity/specificity plots highlight tests at various stages of COVID-19 and confirm the expectation that serological tests are more effective in later stages of the disease when higher IgG and IgM levels are present in the blood (Figure 3). The heatmap of tests in the “overall” category ranks the highest-performing test in each target antibody category based on sensitivity, followed by specificity (Figure 4). Top-performing COVID-19 serological tests (>95% sensitivity and specificity) from the XY plots and heatmap are summarized in Table 1. 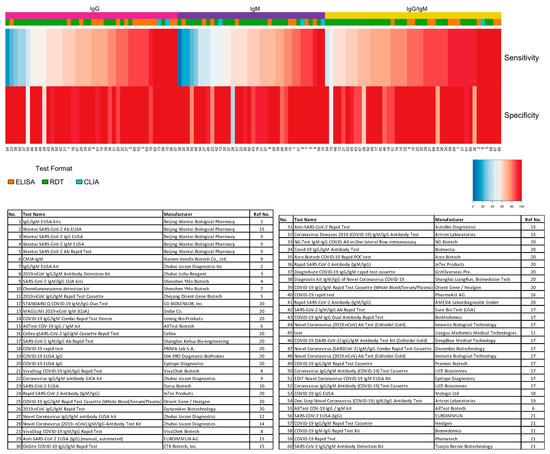 Figure 4. Independent evaluation of SARS-CoV-2 serological test overall performance. Sensitivity and specificity data from studies that did not specify the COVID-19 stage (“overall” group) are represented in a heatmap. The heatmap is ordered according to the antibody target (IgG, IgM, and IgG/IgM) followed by sensitivity and specificity values. All analyses were conducted using software R version 3.6.3. Heatmaps were generated using the gplots and RColorBrewer packages. ELISA: enzyme-linked immunosorbent assay; CLIA: chemiluminescence immunoassay; RDT: rapid diagnostic test.

In light of policies to ease the lockdown and reopen the economy, large-scale seroprevalence studies to screen for immunity status are being implemented in several jurisdictions. Critics point to gaps in our understanding of immune response to COVID-19 infection, including the ability of serological tests to detect neutralizing antibodies and the capacity of the immune system to provide long-term immunity against SARS-CoV-2. However, some argue that in the context of a global viral outbreak with a relatively high mortality rate, inaction due to uncertainty can have negative consequences compared to the harm caused by false-positive and false-negative serological test results [20]. Several jurisdictions have initiated seroprevalence studies to provide a more accurate estimate of cases with positive SARS-CoV-2-specific antibodies, irrespective of disease symptoms. In Los Angeles County, the prevalence of SARS-CoV-2 antibodies in the community was estimated to be 4.65%, equivalent to 367,000 adults, which was substantially greater than the 8430 confirmed cases in the same county at the time of the study [21]. In New York City, 19.9% of the population has been estimated to have SARS-CoV-2 antibodies, compared to 2.1% confirmed cases as of 2 May 2020 [22]. Similar studies from Germany, the U.K., Singapore, and China show significantly higher estimates of positive SARS-CoV-2 antibody cases compared to symptomatic cases confirmed by molecular tests [23]. As undetected cases with mild or no symptoms can transmit the virus, it is not surprising that countries (e.g., South Korea, Germany, and Singapore) with large-scale and well-organized testing programs, combined with extensive isolation and contact tracing for infected individuals, have had some success in minimizing COVID-19-related death in their populations [24].

As serological tests are in high demand, in part due to an increase in large-scale seroprevalence studies, it is imperative for national and regional governments to continue coordinated efforts to independently validate serological test performance and partner with industry to scale up manufacturing and production capacity. Existing emergency authorization programs, intended to accelerate the manufacturing of diagnostic tests, must also be accompanied by clear and informed guidelines on preferred and minimally acceptable profiles of COVID-19 serological tests designed for specific indications.

Despite the unprecedented response to the outbreak, major gaps remain in our understanding of the interaction between SARS-CoV-2 and the immune system, which can negatively impact serological testing utilization. Coordinated research efforts are urgently needed to investigate some of the key gaps in our knowledge, including:

In the context of the COVID-19 outbreak and the execution of return-to-work policies, failing to take advantage of available diagnostic tools due to uncertainty can have profound consequences. Medical professionals frequently rely on imperfect evidence with the possibility of false positives and false negatives. It is, however, important to clearly understand the limits and potential of serological tests to make informed decisions based on risk and benefit assessment in each specific situation. In the words of Tedros Adhanom Ghebreyesus, Director-General of the World Health Organization, “Countries cannot fight this pandemic blindfolded. Countries should know where the cases are.”