Age related macular degeneration (AMD) is a disease associated with aging of the central area of the retina called the macula. It results in a progressive loss of central vision.
In western countries, AMD is the leading cause of severe vision loss in people over the age of 50. About 25 to 30 million people suffer from AMD. Due to the aging of the population, this figure could double in the next 35 years.

Age related macular degeneration (AMD) is a disease affecting the macular (central) region of the retina that occurs most frequently in elderly individuals. It is primarily caused by the degeneration of the retinal pigment epithelium (RPE). This region of the blood-ocular barrier transports nutrients and oxygen between the retina and the choroid and produces growth factors and cytokines. The RPE layer also plays a crucial role in phagocytosis of used photoreceptors. It forms a monolayer on top of Bruch’s membrane (a multi-layered extracellular matrix), under which are situated chorio-capillaries. The RPE and Bruch’s membrane act as a barrier between the choroid and the retina (Figure 1). 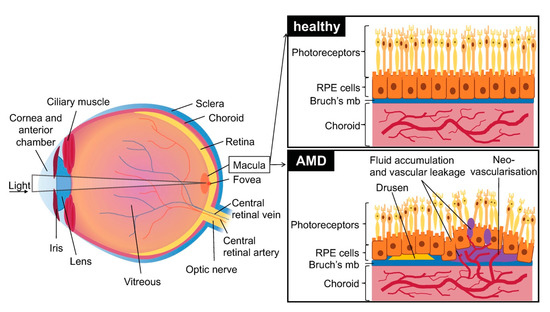 Two main AMD subtypes exist: dry AMD which is most prevalent and neovascular AMD (or wet AMD (vAMD)) which occurs in only 10–15% of cases. Though dry AMD is most common, vAMD is responsible for most of the loss of vision in patients [1].

The first signs of dry AMD are small, white-yellow deposits called drusen situated between the RPE and the underlying Bruch’s membrane. They are composed of an accumulation of ubiquitin, integrins, complement, collagen, fibronectins and beta-amyloids. Drusen can be classified by size (small: less than 63 µm in diameter, large: over 125 µm in diameter) and form (hard: well defined margins, soft: diffuse margins). The formation and accumulation of drusen cause hypoxia in the retinal pigment epithelium by decreasing the flow of oxygen from the chorio-capillaries to the RPE, which secondarily leads to degeneration. Drusen are typically not seen in murine AMD; however, more and more human-like models are starting to emerge [2].

In its late stages dry AMD is also characterized by a decrease in autophagy and clearance of debris by RPE cells [3]. Hypo/hyper pigmentation, or general displacement of pigmentation, is also observed in RPEs. The term ”geographic atrophy” is used when a loss of RPE and photoreceptor cells is observed in the central region of the retina, namely the macula. It is a hallmark of late-stage dry AMD, and the atrophic area progresses slowly over the years, decreasing visual function. The causes for geographic atrophy are yet still unclear, though environmental and genetic factors (specifically the complement pathway) play a substantial role [4].

vAMD occurs in 10 to 15% of patients and is characterized by choroidal neovascularization. Capillaries grow from the choroidal capillaries through Bruch’s membrane and into the retina [5]. The choroidal neovascularization (CNV) caused during vAMD leads to edema in the retina and to photoreceptor cell damage due to vascular leakage. Neovascularization causes RPE detachments, tears and hemorrhages and leads to atrophic macular scars that cause permanent damage to vision. In some serious cases it also causes the detachment of retinal pigment and accumulation of serous fluids and hemorrhage under the RPE layer. vAMD may in some cases also present drusen [1].

Most genetic variants known to cause heritable AMD are genes in the complement cascade or genes encoding for VEGF and components of the collagen matrix pathway [6]. For example, polymorphisms in complement factor H, I, and complement 3 and 9 genes are associated with AMD [7]. A coding variant was described in the factor I region (CFI gene) as highly penetrant (individuals carrying that variant also expressed the associated phenotype). FI is a serine protease, part of the complement cascade, that cleaves the alpha chains of activated complement factors C3b and C4b. It is constitutively expressed by RPE cells. The FI-mediated regulatory mechanisms are also associated with CFI variants determinant in atypical hemolytic uremic syndrome and systemic lupus erythematosus. The pGly188Ala substitution reduces the expression and secretion of FI which leads to loss of function mechanisms. Currently, new treatments selectively inhibiting complement activation are being developed [8].

vAMD is more aggressive than the dry form. Currently, the only treatment relies on intravitreal injections of anti-VEGF to inhibit angiogenesis and minimize visual loss.

Three main drugs are currently approved: aflibercept (Eylea, a fusion protein of the extracellular domains of VEGFR1-2 serving as decoy receptors for VEGF, VEGFB and PlGF), bevacizumab (Avastin, a recombinant humanized monoclonal antibody that inhibits VEGF), and ranibizumab (Lucentis, a humanized monoclonal antibody fragment derived from the same parent antibody than bevacizumab). Both ranibizumab and bevacizumab have similar efficacy in randomized trials over a period of 24 months. [9][10]

A novel inhibitor called conbercept (Lumitin) developed by the Chengdu Kang Hong Biotech is currently in phase 3 clinical trials. Conbercept binds to several VEGF family members including VEGF-A, VEGF-B, and PlGF. It has a longer half-life and a better bioavailability than ranibizumab or aflibercept. It only needs quarterly administrations, thus reducing the load on patients and the healthcare system.[12]

Other means of treating vAMD were used before the widespread of anti-VEGF injections. However these methods were less reliable with relapses in following years and either did not improve visual recovery. They include laser photocoagulation, which consists of laser treatment in the extra-foveal, juxta-foveal or sub-foveal zone; and photodynamic therapy, which consists of a non-thermal laser treatment. A photosensitizer is injected in the area of interest and activated by a specific light wave. This method prevents the occurrence of thermal tissue damage.[13]

Finally, vitamin supplements in the intermediate stages of the disease may delay the development of AMD in the other eye and the reduction of vision loss; specifically vitamins E, C, carotenoids, and mineral supplementation (zinc oxide and cupric oxide). [13]

The procedure of anti-VEGF treatment is still quite time consuming and traumatic for the patients. In addition, even if anti-VEGF treatments delays vision loss caused by vAMD, many patients nevertheless remain refractory to these treatments or become resistant. It is therefore absolutely necessary to develop new therapeutic strategies to treat patients in the first and second line. Thus, it is very important to implement different models of vAMD in order to reach this objective.

Experimental models of vAMD are essential to screen different innovative therapeutics. The currently used in vitro and in vivo models in ophthalmic translational research and their relevance are discussed in this review [14].

Anonymous
08 May 04:22:43
0
Interesting schematic representation of the eye with healthy retina