Titanate nanotubes (TNTs) were first described in the 1990s. These nanostructured tubular materials present excellent characteristics and performances [1]. Among them, titanium dioxide TiO2 NT exhibit high chemical stability and catalytic activity, a high specific surface area, strong metal–support interaction, and good performances in alkaline and acidic environments. TiO2 NT have a one-dimensional (1D) structure and exists as bundled tubes with a length between 1 and 220 µm and a diameter between 30 and 80 nm. The morphology of TNT depends on which synthesis method was used, including electrochemical anodization [2][3], a template-assisted method, sol–gel chemistry [4], etc. given all these characteristics, among other applications, TNT are used as filler in fuel cell membranes [1].
One of the earliest examples of composite AEM with TNT was presented in 2018 by Elumalai and Sangeetha [5]. The same authors incorporated TNT covalently linked with an imidazolium-based ionic liquid (IL) into quaternized polysulfone (QPSU) with triethylamine (TEA) [6]. The presence of the IL increased the IEC; the best conductivity was observed for 5 wt% IL-TNT (21 mS cm−1, 30 °C), due to the uniform distribution of the filler without any cluster formation. The same composite membrane reached a maximum tensile strength (TS) of 43 MPa and a fuel cell power density of 302 mW cm−2 at 60 °C under 80% RH. Quaternized TNT (QTNT) were also incorporated in quaternized poly(arylene ether ketone) (QPAEK) [7].
Halloysite nanotubes (HNTs), natural two-layered aluminosilicate clay minerals, were quaternized (QHNTs) with imidazolium groups bearing different functionalities (butyl, decyl, carbethoxyl, and benzyl moieties) and then embedded into a chitosan (CS) matrix [8]. Figure 1 shows the TEM images of HNTs and QHNTs. HNTs presented a clear tubular structure while after modification QHNTs showed a well-defined polymeric layer.

Carbon nanotubes are a relaxation of the spherical structure of fullerene rolled up on itself, obtaining the typical cylindrical structure. They can be divided into two types:

Layered double hydroxides (LDHs) are inorganic lamellar ionic materials belonging to the group of anionic clays and their synthesis has a low cost. The structure of LDH is based on Mg(OH)2 brucite-type blocks where the replacement of M2+ with M3+ cations gives positively charged layers, balanced by mobile anions in the interlayer, which can be reversibly inserted. The lamellae are linked by Van der Waals forces. LDHs with an acceptable anionic conductivity and excellent stability in alkaline media can be used successfully as filler in AEM [9]. Well dispersed LDHs increase the mechanical properties of the matrix and can help to mitigate the loss of conductivity observed in the case of non-conducting fillers.

One of the first attempts to use LDH in a composite date back to 2012 when Zhao et al. dispersed LDH in crosslinked PVA [10]. SEM images showed a good homogeneity without aggregates or chunks until 30 wt% of LDH (30LDH). FC with a PVA/20LDH membrane achieved a maximum power density of 82 mW cm−2 at 80 °C.
Exfoliated LDH nanosheets, obtained via the filtration process, were inserted in quaternized PVA [11]. The conductivity of the LDH(NO3−) membrane after exfoliation and restacking was around 200 mS cm−1 at 80 °C, which seems surprisingly high especially for nitrate ions and also higher than the OH− form. The improvement of conductivity was attributed to the exposed surfaces of the nanosheets, the enhanced water uptake, and long-range ordered ionic channels. For the composite with 10 wt% of PVA, (LDH(NO3−)/QPVA-10) was reached at the same temperature 172.1 mS cm−1.
Other examples concern the use of mixed membranes composed of QCS and PVA; they hosted LDH intercalated with glycine betaine [12], an LDH flower-like hierarchical structure wrapped on SiO2 nanospheres (LDH@SiO2) [13], and carbon nanotubes coated with LDH (LDH@CNTs) [14]. In the last example, LDH nanosheets were anchored on carbon nanotubes by a NH4F-assisted in situ coating method (Figure 2) [14].

An attempt to use an inexpensive commercial polymer was proposed in 2017 by Di Vona et al. [9]. The composites were prepared from QPSU grafted with TMA or 1,4-diazabicyclo[2.2.2]octane (DABCO) and 14 wt% of LDH, synthesized by the urea method with a composition Mg0.62Al0.38(OH)2(Cl)0.38·0.6H2O. The ionic conductivity at 60 °C as a function of RH is reported in Figure 3: composite membranes showed lower conductivity values due to the lower water uptake, while polymers with TMA were more conductive because of the higher water content. The mechanical properties in fully humidified conditions were improved, with a three-fold increase in Young’s modulus for composites (~600 MPa vs. ~200 MPa). The membranes were treated in alkaline conditions at 60 °C without losing their properties. 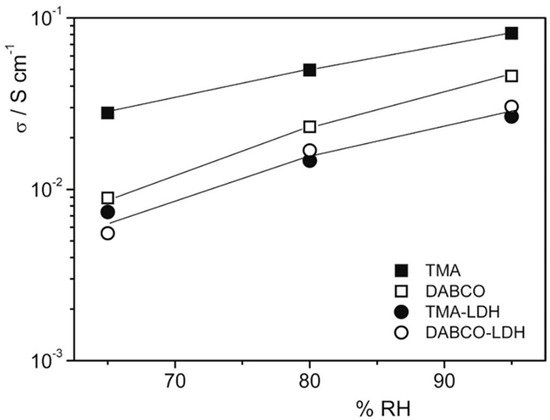 Figure 3. Conductivity measurements at 60 °C as a function of RH% of membranes after treatment at 25 °C in 2 M KOH for 24 h. Reproduced with permission from Ref. [9].

MXenes are a family of 2D layered materials which include transition metal nitrides, carbides, and carbonitrides produced by selective exfoliation of MAX phases, where “M” refers to early d-block transition metals, “A” to groups 13 and 14 (main sp elements) and “X” to carbon or nitrogen atoms [15]. MXenes present several properties, such as hydrophilicity, fast ion transport and intercalation, large surface area, etc., provoking interest in many scientific applications including FC.

Silicon dioxide and silicates are the most abundant classes of minerals in nature, and their cost is practically negligible. Phyllosilicates, such as montmorillonite and palygorskite, are hydrated silicates of aluminium and/or magnesium with the ability to exchange ions. Notable successes were obtained by using Si and its derivatives as fillers in proton exchange membranes [16][17]; later their use was extended to AEM. Sol–gel silica composites were described in a recent review by Sgreccia et al. [18].

One of the first examples was proposed by Zuo et al. who prepared a composite with TMA-PVDF and SiO2 [19]. The membrane with 2 wt% of SiO2 showed the best specific conductivity (3 mS cm−1). More recently silica-coated PVDF (SiO2@PVDF) electrospun nanofibers were quaternized and inserted in QCS [20]. Tests in alkaline DMFC, performed at various MeOH concentrations, showed a maximum power density at 80 °C up to 99 mW cm−2 (2 M MeOH), presenting only 4% of performance loss after 100 h in chronoamperometry test.
PVA was often used as matrix for silica hybrids [21][22]. A DMAFC maximum power density (97 mW cm−2, 80 °C with 2 M MeOH + 6 M KOH) was achieved with quaternized PVA and 5 wt% of nanosized (14 nm) fumed silica (FS) due to its higher free volume and hydroxide ion transfer phenomenon [23]. A different approach was proposed by Lu et al. where cellulose nanocrystal (CNC)-based composite films were mixed with 40% of hydrophobic binder (PVA : silica gel = 1:2) [24]. Due to the hydrophilicity and dimensional stability of CNCs, membranes exhibited high water uptake (~80%) but low water swelling (~5%).

Aromatic polymers were also a preferred choice in the building of silica-containing membranes for fuel cells, diffusion dialysis (DD), and redox flow batteries. Pan et al. in 2015 improved the efficiency of acid recovery by DD with the fabrication of a quaternized PPO/SiO2 hybrid material (QPPO–SiO2) obtained by electrospinning and post-treatment (solvent fumigation and hot-press) [25]. The main fiber diameters were between 200–300 nm with an average of ~250 nm as shown in Figure 4. 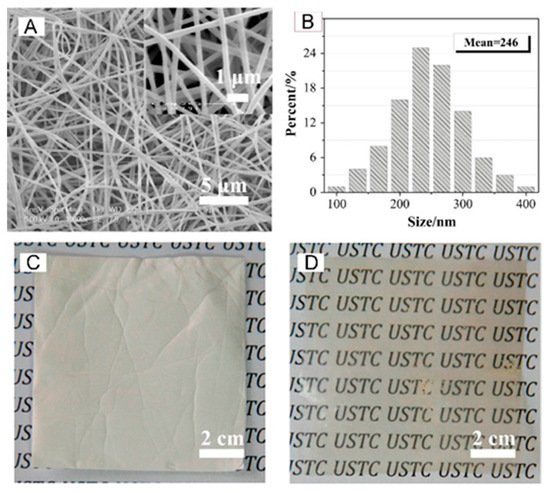 Figure 4. SEM images (A) and fiber diameter distribution (B) of QPPO–SiO2; optical photographs of nanofiber mats (C) and membrane (D) after hot-press. Reproduced with permission from Ref. [25].

One of the major uses of metal oxides as filler in AEM is in improving the mechanical properties of soft polymers such as PVA. Various oxides are used, including Al2O3, a well known hard material characterized by poor thermal and electrical conductivity, TiO2, non-expensive and non-toxic with high chemical stability, and ZrO2, a polymorphous crystalline oxide with high ionic conductivity when doped with acceptor cations and low electronic conductivity. The chosen matrices were mainly PVA and aromatic polymers.

PVA quaternized with glycidytrimethyl ammonium chloride and 10 wt% Al2O3 (QPVA/Al2O3) displayed in DMAFC a maximum power densities of 36 mW cm−2 with 4 M KOH + 4 M CH3OH, as shown in Figure 5 [26]. Although SEM images indicated some chunks and aggregates randomly distributed on the surface, the storage modulus slightly increased with respect to pure PVA (172 vs. 151 MPa at 100 °C). 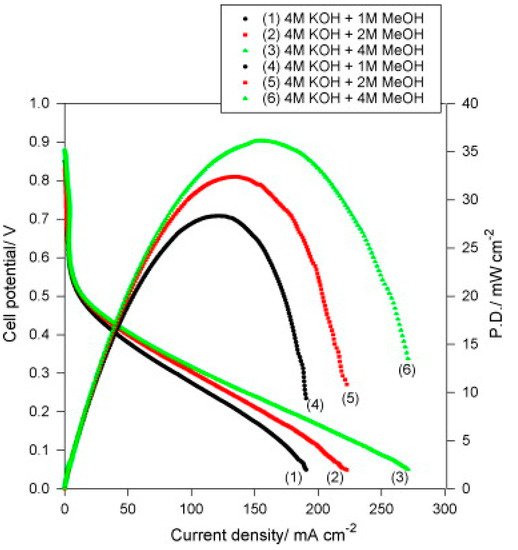 Many aromatic polymers were used as host matrices: PSU and quaternized polystyrene-block-poly(ethylene-ran-butylene)-block-polystyrene (PSEBS) [27], TMA-PSU [28], vinylbenzyl chloride-divinylbenzene copolymers (AEH) [29], PSU and TMA-PPO [30].
The effect of the doping with hydrophilic (tri(hydroxymethyl)propane, TMP) and hydrophobic (polymethyl-hydrosiloxane, PMHS) TiO2 nanoparticles was studied using DABCO-PSU as the matrix [31]. The DMA and DSC studies showed a Tg around 250 °C, due to a partial crystallization of the polymer, with a significant decrease in the contact angle (67°) for composites with hydrophilic character. The ionic conductivity was higher for the hydrophobic filler (PMHS-TiO2) related to a more homogeneous dispersion, as observed by AFM images.
Some examples of composites concern the use of ionic liquids and nanoparticles with the aim of simultaneously increasing conductivity and mechanical properties. 1-Methy-3-methylimidazolium IL and nano-TiO2 were mixed to TEA-PPO [32]. The conductivity increased with the amount of IL and TiO2 and the best mechanical properties were reached for 15 wt% IL and 1 wt% of TiO2 with Young’s modulus of 921 MPa and 6% of elongation at break. The degradation rates of the ion conductivity measured after treatment in 4 M NaOH solution at RT for 280 h, showed for 1 wt% of TiO2 a reduction of around 30% instead of 80% without the nanofiller, confirming the role of TiO2 in stabilizing the IL in the membranes [32]. The same authors inserted methyl, ethyl, hydroxyethyl IL and TiO2 into a TEA–PPO matrix [33]. The stability tests, in 4 M NaOH at RT for 288 h, revealed for the ethyl derivative a 92% retention of conductivity while the pristine membrane retained 78%.